The Trinity Knot (AKA the Triquetra symbol) is one of the more notable Celtic designs.

Arguably best-known for its appearance in the ancient Book of Kells, the Trinity Knot has also been found carved onto stones in many parts of Northern Europe.

It’s one of the more notable Celtic Knots and it’s arguably one of the most popular Celtic symbols when it comes to tattoos and jewellery.

In this guide, we’ll take a look at the design, its origins and the various Trinity Knot meanings. Dive on in. 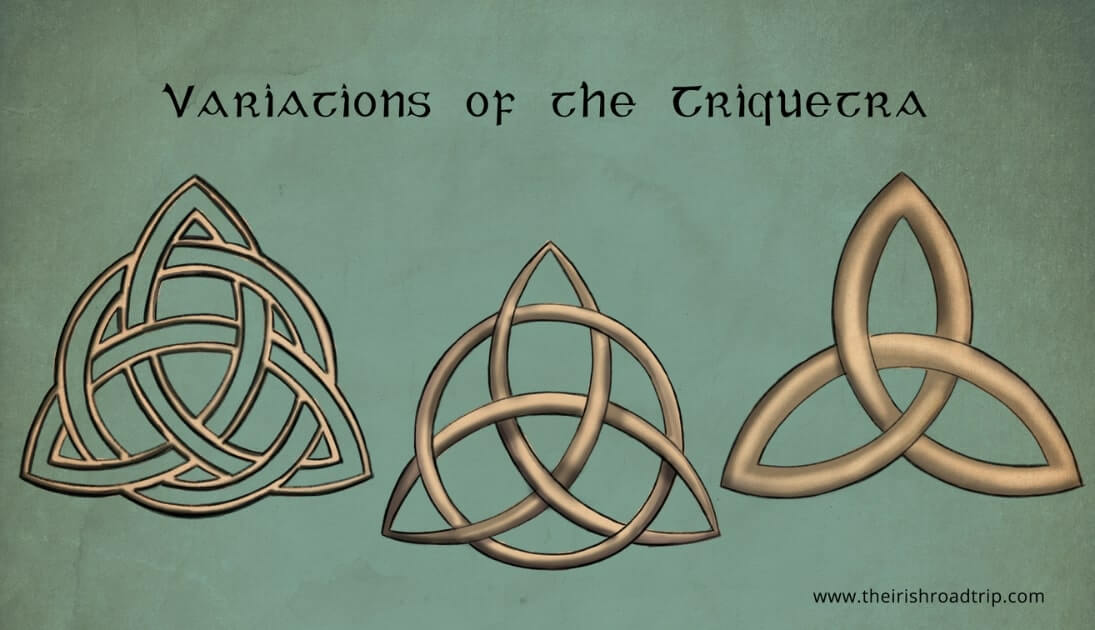 Before we look at the Trinity Knot meanings and it’s history, take 20 seconds to read the points below as they’ll get you up-to-speed quickly:

The Triquetra symbol is old, but like many ancient symbols, no one knows for sure where and when it exactly originated. It’s a hot topic for debate, but it’s generally accepted that the symbol is at least 5,000 years old. It’s not unique to Celtic culture either, with examples of the Triquetra being found across the globe, dating back to various periods, including the iron age.

The Celtic Triquetra first appeared in insular art around the 7th century, famously in the Book of Kells, but also carved into Celtic Crosses and holy buildings and monuments.

The Triquetra has an iconic design that has truly stood the test of time. It features three pointed ovals, all interlaced with one another. The central oval points up, while the other two sit on either side of it, pointing down and to the sides. It’s made from one continuous, ever-flowing line, which is said to represent eternity.

Also known as the Celtic Trinity Knot, the Triquetra has a strong connection to the Holy Trinity in Christianity. Indeed, the symbol’s earliest appearances in Celtic insular art are on religious manuscripts and stonework, from the time of Celtic Christianity.

Some historians believe the Celtic Triquetra symbol was used by Celts before they converted to Christianity, and that missionaries used the symbol as a teaching aid. In fact, the Fish sign—a classic Christian symbol—is essentially a Triquetra on its side.

You may see variations of this design, and it’s not uncommon for the Triquetra to be interlaced with a circle. A relatively modern take on the Celtic Triquetra symbol has it entwined with a love heart, symbolising love (see the Celtic Love Knot for more). 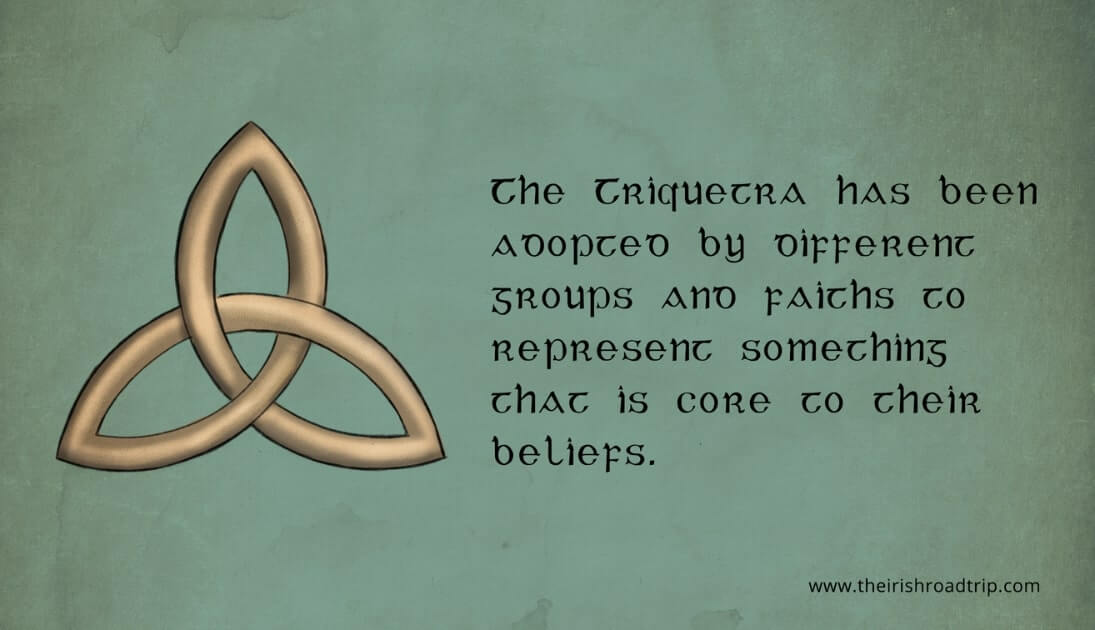 The Triquetra meaning varies greatly depending on the group using it. It’s easy to assume that the Celtic Trinity Knot is all about the Holy Trinity, but that’s not quite the case.

Remember, this is an ancient symbol that predates Christianity by hundreds of years. Exactly what it might have meant to the ancient Celts, we cannot know for certain, but we can have a pretty good guess.

1. What it meant for Celts

The Celts revered the number three, believing that everything of importance comes in threes. For them, the Triquetra may have represented a whole host of things.

One popular belief is that the three points symbolised the cycle of life, death, and rebirth, with the endlessly looping pattern representing eternity.

2. What it meant for Wiccans

To this day you’ll find many people with deep Irish roots talking about the Triquetra representing, not the Father, Son, and Holy Spirit, but the Maiden, the Mother, and the Crone.

This relates to the nature of the ancient Celtic Goddess; the mother represents creation, the maiden represents innocence, and the crone symbolises wisdom.

3. What it meant for Pagans

Some believe that the three points mirror the three domains of earth; land, sea, and sky. One of our favourite takes on it is that the Triquetra symbolises the body, mind, and spirit, bound together to form the soul.

If you look up the Serch Bythol symbol you’ll see how this symbolism can be expanded on in other designs, which is why it is one of the more popular Celtic family symbols.

4. What it meant for Christians

The Triquetra meaning for Christians was simple – it was a handy tool for teaching the ways of Christianity and the Holy Trinity. It would’ve been easy enough to work with something familiar to teach new lessons of faith.

In fact, versions of the Triquetra meaning from the Celtic Christianity period formed the sign of the fish, a symbol synonymous with Christianity.

The History of the Triquetra symbol 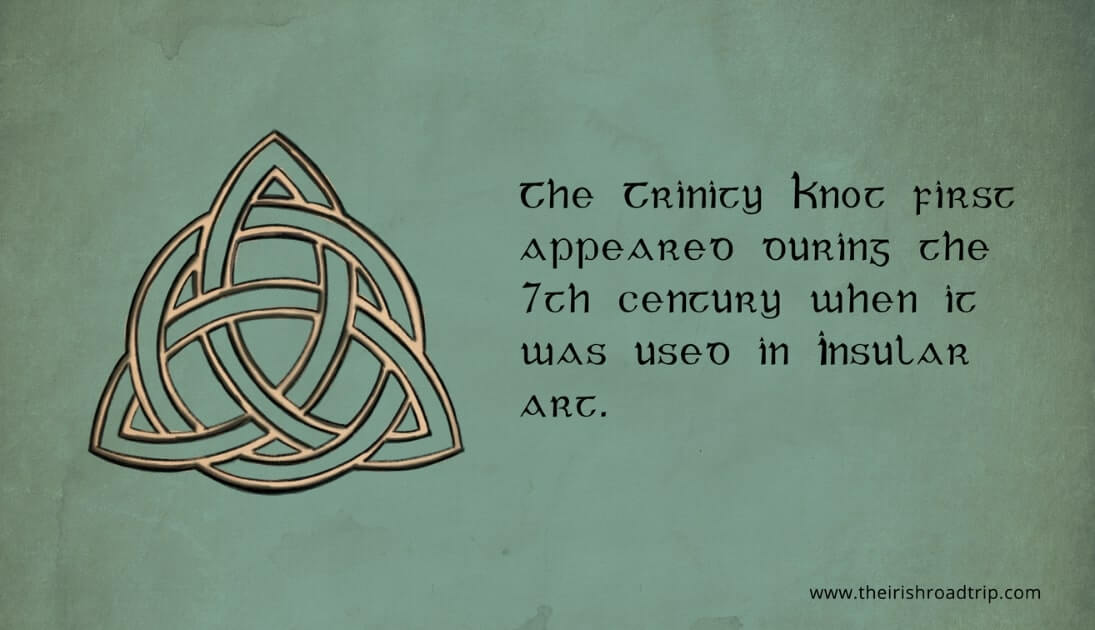 Now that we have the Triquetra meaning out of the way, it’s time to look at the symbol’s rich history.

As we said earlier, no one knows when the Triquetra was drawn for the first time, though it’s believed to date back as far as the 4th century BC.

We do know that it wasn’t originally a Celtic symbol, and it has appeared in cultures around the world and across the ages.

Symbols bearing three arcs, such as the Celtic Trinity Knot and the Triskelion, first became widespread around the 4th century BC.

Early examples have been found adorning ornamental ceramics from Persia and Anatolia, as well as on Ancient Greek/Lycian coins.

However, the very earliest Celtic Trinity Knots go back much further than that, with stone carvings depicting the Triskelion dating back to 3200 BC.

Since the 4th century BC, the Triquetra has been found on Scandinavian rune stones and Germanic coins. But it wasn’t until the 8th century AD that it became widespread among the Celts in Ireland and Britain.

Use in Insular Art

Insular art refers to artwork produced in Ireland and Britain during the post-Roman era. It’s largely characterised by Celtic interlace patterns and knots.

Early examples date back to the 7th century, but the style really kicked off a century later and continued until around the 12th century in Ireland.

Insular art was mainly found in metalwork, such as brooches and decorative goblets, illuminated manuscripts, and carved into stone slabs and Celtic Crosses.

One of the best examples of insular art is the unfinished Book of Kells, which features the Triquetra regularly.

Around this time, the Celtic Triquetra was also frequently used on coins in Britain and Ireland.

The popularity of the Triquetra hasn’t waned after all these many thousands of years. In fact, it’s seen a surge in popularity recently, becoming a common choice for logos, artwork, tattoos, and jewellery.

Look closely, and you’ll start seeing it everywhere. In popular culture, the Triquetra has made an appearance on album covers (Led Zeppelin IV), movies (the hammer in Thor), and TV shows (it frequently pops up in Charmed and more recently the German Netflix series “Dark”).

You’ll also see it used as a Celtic symbol for friendship, a sisterhood symbol and as a brotherhood symbol, too.

How to make a Trinity Knot tie

After reading about the Trinity Knot meaning, many people having an Irish themed wedding opt for using a Trinity Knot tie.

If you’d like to wrangle your tie into the Trinity symbol, the video above should give you a good insight into how it’s done.

FAQs about the Celtic Triquetra

We’ve had a lot of questions over the years asking about everything from ‘Where does the Trinity Symbol come from?’ to ‘What is the Trinity Knot meaning?’.

What does Trinity knot symbolize?

The Celtic Trinity Knot meaning varies greatly between Celts, Pagans, and Wiccans, symbolising everything from the Holy Trinity to the cycle of life.

Is the Trinity knot a pagan symbol?

Several resources state that the Triquetra Knot is a Pagan symbol, however, we can’t find one solid resource to cite, so we can’t argue for or against.

Well Keith, I bet you haven’t even thought about this article in a while! But let me tell you that I thoroughly enjoyed it and found it very informative. It ended up being just about everything I was looking to know… and all in one spot! The tie tying video was a nice little bonus as well. Hope you made memories that will withstand the test of time! Thank you for sharing as you went…

Hiya Keith. 'Praise where praise is due' so thanks for this great article - have been doing Celtic knots for years yet only just found out that one of them is called the triquetra! Now I know. Good on yer!