The Celtic Tree of Life symbol (Crann Bethadh) is an impressive sight.

Arguably one of the most impressive of the many Celtic symbols, the Celtic Tree of Life meaning revolves around how the Celts viewed trees as vital to their existence.

Below, you’ll discover the origins of the Crann Bethadh, the different designs and, of course, what it symbolises.

Quick need-to-knows about the Celtic Tree of Life symbol 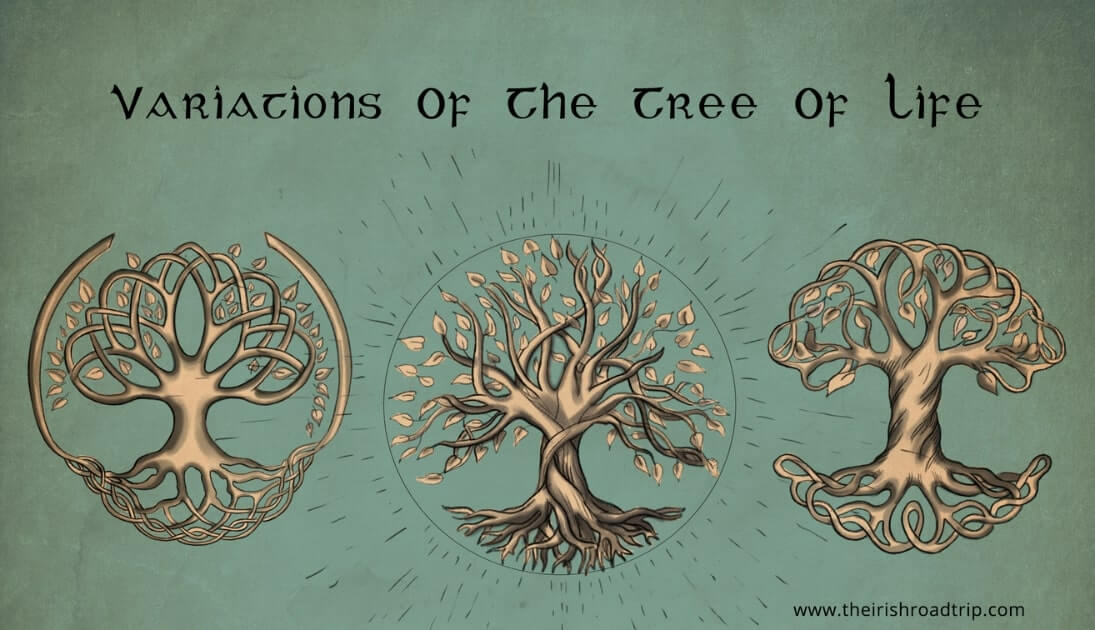 Before scrolling down to see the Celtic Tree of Life meanings, take 15 seconds to read the points below, as they’ll get you up-to-speed quickly:

1. Trees were vital to daily life

The Celts saw trees as being vital to their very existence. They depended on trees for shelter, food, heat and trees were also home to some of the wildlife that they hunted.

As the oak trees were some of the largest and tallest trees in the forest, they frequently attracted lightning. This was seen by the Celts as a sign from the Celtic Gods that the tree was special.

Although there are several Celtic symbols for strength, few come close to the Irish Tree of Life. The Celts admired the immense power of the mighty root system that lay beneath the oak and held its weight (more below). 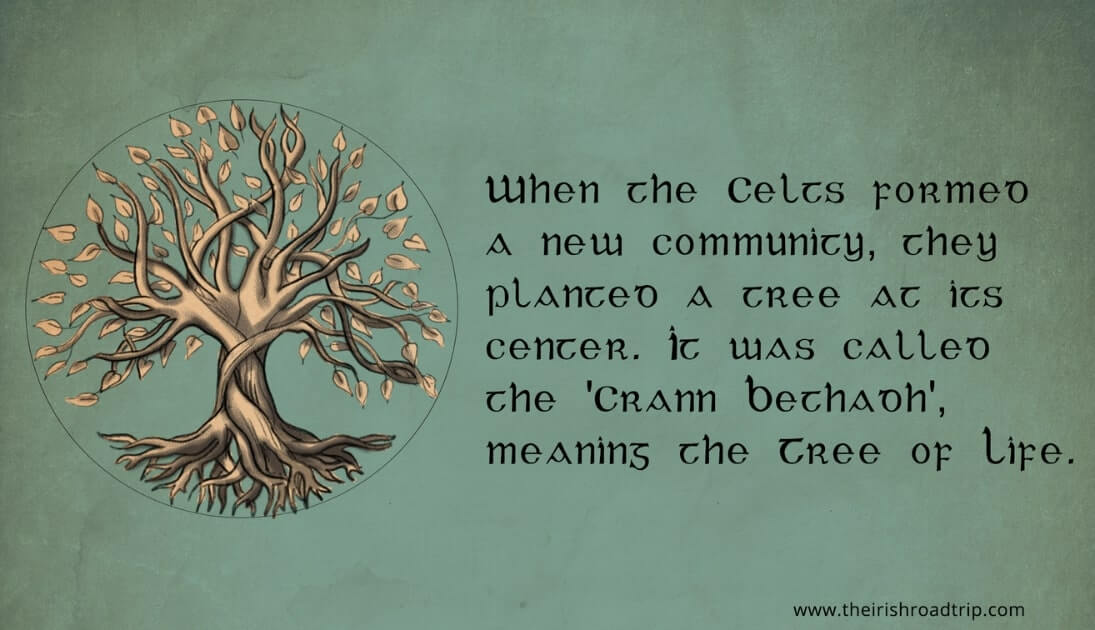 The Celtic Tree of Life symbol is one of the many designs to come from an ancient group of tribes known as the Celts.

The Celts lived across Europe and, contrary to popular belief, were not Irish or Scottish – in fact, the exact origin of these ancient people is unknown.

The importance of trees

We’ve touched lightly on the importance of trees in Celtic culture, but this can’t be underemphasised.

The Celts believed in nature and the connection between the earth and the life beyond and it’s thought that they believed that trees held the spirits of their ancestors.

The Celts saw the towering strength and longevity (oaks can live for over 300 years) of the oak tree as a symbol of nobility and endurance.

When the Irish Celts formed a new community, they planted a tree right at its center, and it was called the ‘Crann Bethadh’, meaning ‘the Tree of Life’.

As the hub of the community, the tree’s shady branches were the place where important meetings were held.

In times of warfare, the Celts believed that if they cut down the tree of their enemies, it would ensure their victory over them.

They regarded the root system of the tree as a physical doorway, penetrating the earth to the spiritual world beyond.

Although the symbol is found in many forms and variations, they all show a tree with spreading branches above and a network of roots below.

In some designs, the Tree of Life appears the same if you flip it upside down. Some designs, like ours above and below, are more elaborate, while others are minimalist.

Like many other Celtic Knot symbols, such as the Motherhood Knot and the Dara Knot, some variations of Tree of Life knot is endless with no beginning or end (see the image below).

Crann Bethadh in other cultures

The Norse had a Tree of Life symbol and they possibly brought it to Ireland when they invaded. However, their sacred tree was not the oak but the ash tree which they called ‘Yggdrasil’. 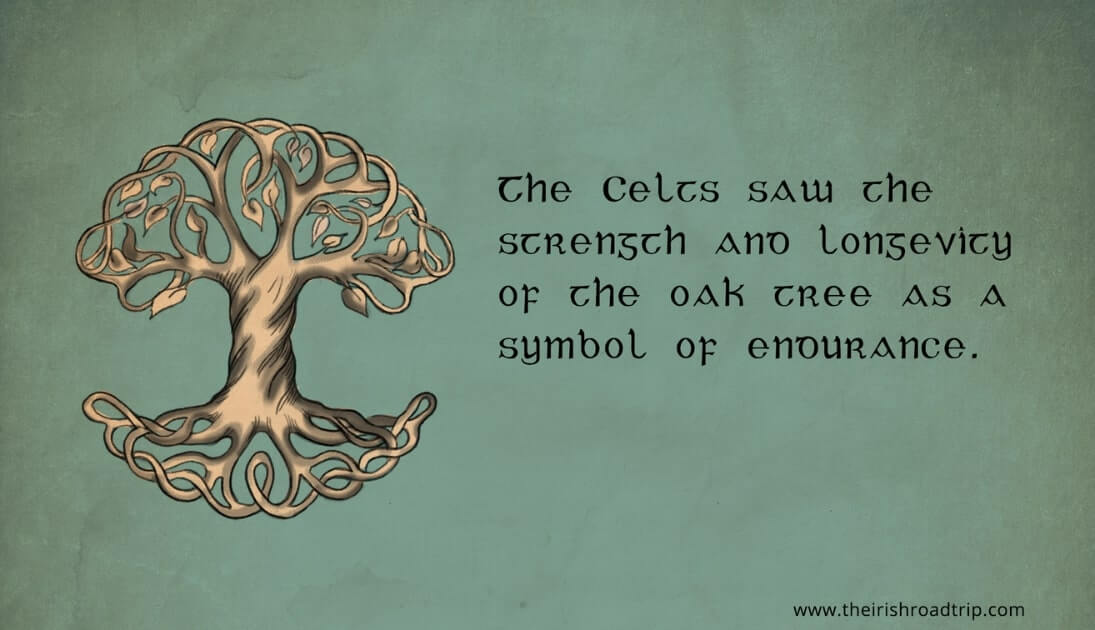 There are many different interpretations of the Celtic Tree of Life meaning, so please be aware that nothing is definite.

Records from back when these symbols were used in everyday life are scarce, so we rely on calculated guesswork. Here are three Celtic Tree of Life meanings to consider:

The most accurate Celtic Tree of Life meaning is that it symbolises strength and wisdom. The Oak tree can live for over 300 years.

During its life, it weathers storms, gets attacked and damaged by humans and animals and grows up to 40 meters in height.

The Celts saw the Oak as a symbol of strength, due to it’s intricate root system that holds the trees massive weight, wisdom, due to the time it spent on earth and endurance, due to the time and conditions it stands proudly through.

2. The stages of life

Another popular Celtic Tree of Life meaning is that it symbolises the three stages of life: birth, death and reincarnation in another life.

It isn’t the only Celtic symbol with a meaning similar to this – the Trinity Knot and the Triskelion both have similar meanings.

As the oak trees were some of the largest and tallest trees in the forest, they frequently attracted lightning strikes. This was seen by the Celts as a sign from the gods that the tree was special.

As the tree grows old and rots, its acorn seeds ensure new beginnings so the tree was seen as immortal. The Celts believed that trees were their ancestors in a reincarnated state.

FAQs about the Irish Tree of Life

We’ve had a lot of questions over the years asking about everything from ‘What’s a good Irish Tree of Life tattoo?’ to ‘What does it mean?’.

What does Celtic Tree of Life mean?

Although there are several different Tree of Life meanings, the most accurate ones are strength, endurance and wisdom.

What tree is the Celtic tree of life?

The Celtic Tree of Life is arguably one of the most important Celtic symbols as it directly features an oak tree.

Great info. I recently picked up a s.s. ring with the design and I've been wearing it since. I'm 59 and hope my tree of life roots are deep. Lol. Thanks

@Sean Riffle, Thank you for sharing this with us. Very interesting.

Hi, my mother is Irish and got me a tree of life pendant because I love learning my ancestors history; there is something written around the tree and I've Googled till my thumbs hurt. If anyone could translate it for me that would be AMAZING!

Thank you! I just received a pendant from my little boy of the Celtic Tree of Life and love it. I’m so glad to know the history behind this beautiful symbol.

Very good! I liked to know about the Celtic symbols Tks?