Out of the many mythical characters in Irish folklore, the Morrigan is arguably one of the best known.

The Morrigan is one of the many prominent figures to feature in Irish mythology and is primarily associated with war / battle, fate and death.

She is a gifted shape shifter and is known to favour changing into the crow. The Morrigan was one of the Tuatha De Danann, who were the folk of the Goddess Danu. 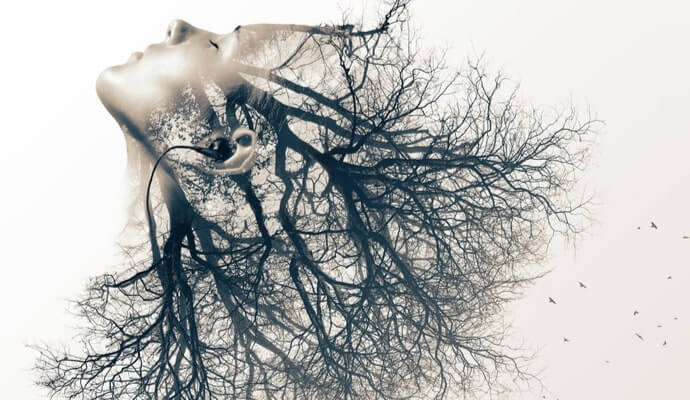 As kids, we were frequently told stories about Celtic Gods and Goddesses, however, few stories had us on the edges of our seats like the tales of the Goddess Morrigan.

The mysterious Morrigan Celtic queen as kids growing up in Ireland. Like all stories from Irish and Celtic Folklore, the tales were colourful, magical and, in this case, featured many a battle.

The Phantom Queen/Morrigan mythology is one of the most popular there is, which is likely due to the incredible stories that revolve around her.

Who is the Morrigan in Celtic mythology?

If you’re not familiar with the warrior queen, she was one of three war Goddesses that featured in Irish mythology. The other two Goddesses were Macha and Neman.

Although the name by which she is called tends to change depending on who is telling the story, she often referred to by several different names:

What is Morrigan the goddess of?

The Morrigan Goddess is also known as what’s called a ‘Triple Goddess’. At times, she appears alongside her two sisters (Badb and Macha).

She is primarily known as the Goddess of war. In a book from 1870 called ‘The Ancient Irish Goddess of War’, the Morrigan is described as being able to predict the death of warriors in battle, which she used to influence the outcome of war.

According to legend, she delivered this message after she appeared as a crow (often mistaken for a raven) and flew overhead during a war. It’s said that her appearance would either terrify those fighting or inspire them to fight for their life.

The Goddess Morrígan and Cuchulainn 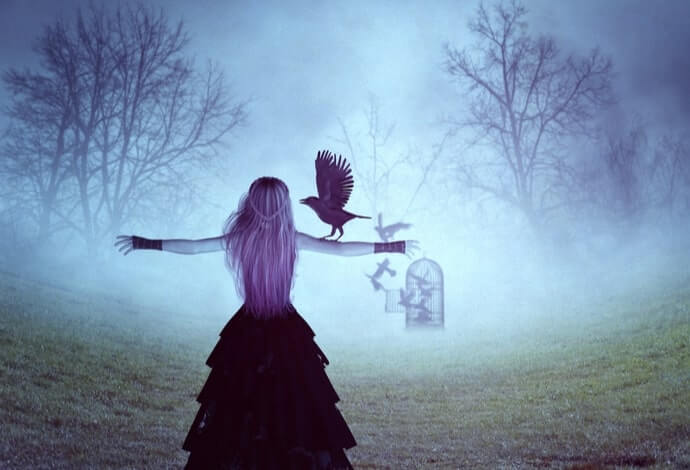 One of the stories about the Morrigan that I recall being told as a child was about an encounter with the mighty warrior Cu Chulainn.

The Goddess Morrigan first appeared to encounter Cu Chulainn while he was defending the province of Ulster from Queen Maeve and her army.

The story goes that the Morrigan fell in love with Cuchulainn and that she tried to seduce him one day before he entered battle, but for one reason or another, he said no, despite the Goddesses immense beauty.

And then, a mighty battle began

Outraged, the Morrigan Goddess used her ability to shape shift to transform from a woman into an eel. This allowed her to swim up to Cu Chulainn as he made his way through a fjord and trip him.

He punched at the eel and managed to hurt it, though just temporarily. It then managed to transform itself into a huge wolf. The wolf ran at a herd of cattle and drove them at Cu Chulainn.

He managed to grab his famous sling-shot in time and used it to fire a stone into the eye of the Morrigan Goddess, who was temporarily blinded.

The Goddess quickly transformed again, this time taking the appearance of a cow. The cow riled up the others in the herd and managed to get them to stampede towards Cu Chulainn.

However, he managed to dodge the herd of cows and hit the Goddess Morrigan with a stone that broke her leg and forced her to accept defeat.

The old woman, the Morrigan Celtic Goddess and the cow

Cu Chullain made his way back to his base after winning the battle. Along the way, he met an elderly lady sat on a little stool milking a cow.

Now, Cu Chullain was weary from battle and he wasn’t paying enough attention. If he was, he would have noticed that this woman was blind in one eye and that her leg was recently injured.

Not sensing the danger that he was in, Cu Chullain stopped to speak to the old woman. Apparently thankful for his company, the old woman offered him a drink of milk.

After finishing his drink, he blessed the woman, not realising that, upon doing so, he cured the Morrigan Goddess of all of her injuries and restored the Goddess to her full strength.

However, the Morrigan did not attempt to engage Cu Chullain in battle – she had already outsmarted him and tricked him into healing her.

The Crow and the death of Cuchulainn

The Goddess Morrigan and Cu Chulainn met once before the great warrior’s death. Cu Chulainn was en route to another great battle when he encountered a woman scrubbing battle armour covered in blood.

This was seen as a very bad omen to encounter before entering battle. Cuchulainn passed the woman and continued to confront his enemy.

It was during this battle that he was mortally wounded. With his last bit of energy, he used some sturdy twine to tie himself upright to a nearby boulder, in an attempt to frighten off any other enemies closeby.

Then a crow landed on his shoulder and he is said to have finally drifted off to sleep for good. Now, the Morrigan was known to transform into a crow… was it her that had the final laugh? Who knows!

The Morrigan Goddess was a shape-shifter and thus tends to be associated with a number of symbols and Celtic creatures.

FAQs About This Celtic Goddess

Since publishing this guide a year or so ago, we’ve had countless emails with questions about the Morrigan Celtic Goddess.

Below, we’ve done our best to answer the most FAQ of these questions. If you have one that we haven’t answered, ask away below.

Who is the Morrigan?

She was one of three war Goddesses from Irish mythology (the others were, of course, Macha and Neman).

What is she the Goddess of?

Known as a ‘Triple Goddess’, the Morrigan was the Goddess of war and it is believed that she was able to predict the death of warriors in battle.

What is the Morrigan symbol?

As this Celtic Goddess appeared as a crow (often mistaken for a raven), many associate this animal as her true symbol.

If you enjoyed this story, dive into our section on Irish culture (you’ll find everything from beer to tales from ancient Ireland.

Thank you for detailed description of the morrigan. Though I'm of Hispanic origin, I have Irish ancestry, back when interracial love was still frowned upon. Thanks again.

This is very informative and easy to understand. Thank you!

Love the Goddess Morrígan, like the Crow often mistaken for a bad omen She brings change, Good future, strength and Power if you meet her AND that is why we must be good to the Crows as you never know if the Goddess is among them ! Celtic Derv

i have come across morrigan multiple times I feel a strong connection whenever I read about her or speak about her I feel she's the goddess I should follow thank you so much for this info.