The Serch Bythol symbol is one of several ancient Celtic Knots.

However, unlike many of the more notable Celtic symbols, information around its origin isn’t as clear.

Below, you’ll find information on everything from the Serch Bythol meaning to variations of the design. 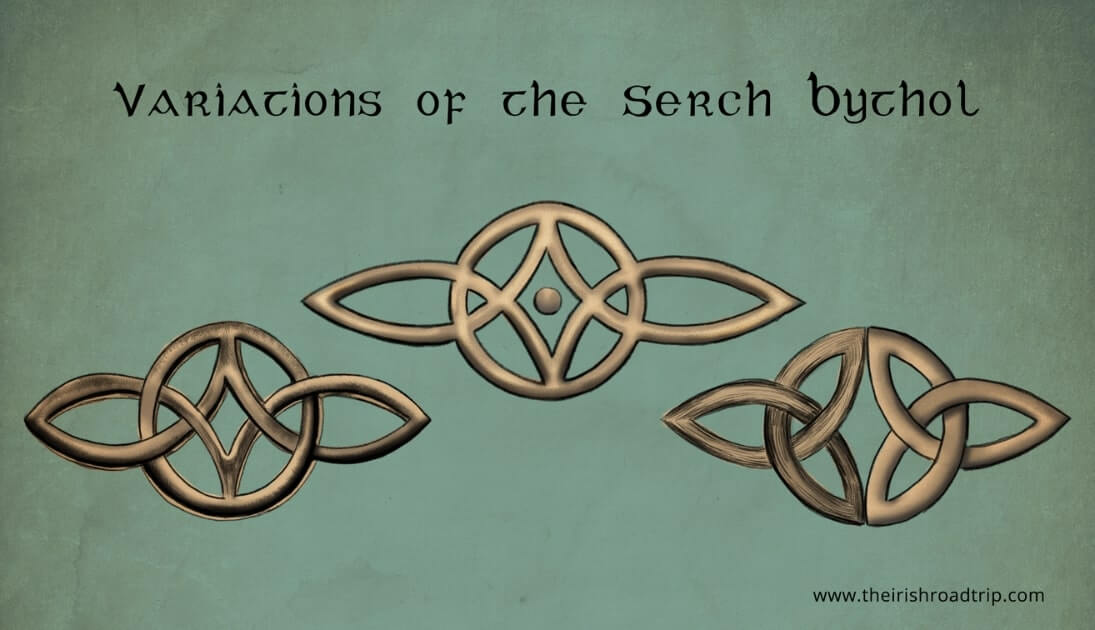 The points below will get you up-to-speed on the Serch Bythol symbol nice and quickly (we’ll go into more detail then later on):

Now, unlike the other Celtic Knots (e.g. the Dara Knot), there’s very little factual information available about the Serch Bythol symbol that can be traced back to the time of the Celts. Most information online is the writers own interpretation (or, sadly, lies to attract website visitors!). As such, we can’t be 100% certain that the design was actually used by Celts.

2. It’s a variation of the Triquetra

Despite the fact that information about its origin is sparse, something we do know is that it is a variation of another well-established Celtic Knot – the Triquetra. So, even if it was drawn for the first time in the last century, its connection to the Trinity Knot means this symbol is deep with meaning and captures the essence of the Celts and their spirituality.

Serch Bythol translates to “everlasting/eternal love” in Welsh, and it’s generally considered one of several Celtic symbols for love. It suggests the joining of two souls—more on that later—and makes a perfect Celtic Love Knot! More on the Serch Bythol meaning below. 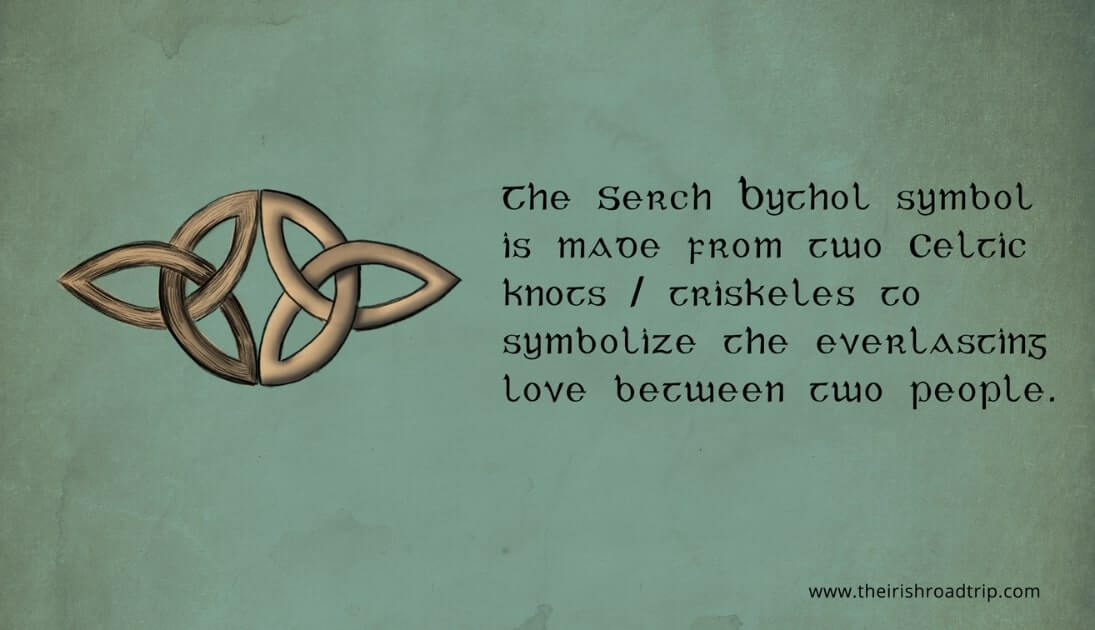 The Serch Bythol design tends to vary quite a bit. Some almost look like an owl swooping toward you.

However, closer inspection reveals that it is actually made from two Trinity Knots. They’ve been flipped on their side and joined together to form one whole.

In doing so, a perfect circle is created, which many believe symbolises eternal love. The design seems ideal for rings and other pieces of jewellery, and it can easily be hung on a chain or piece of string.

If you’re looking to get a Serch Bythol tattoo, the designs above and below are worth considering.

About the Serch Bythol Meaning 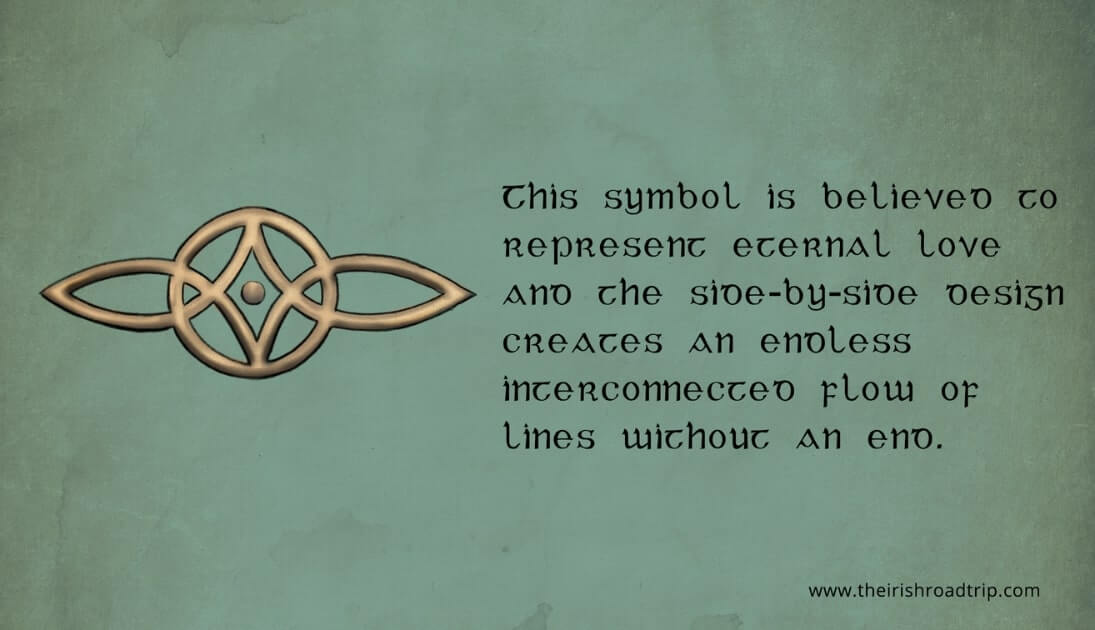 The Serch Bythol meaning is up for debate, but I’ll give you our interpretation of it.

It’s frequently thought to symbolise eternal love, but it goes a little deeper than that. To gain a full understanding of the symbolism, let’s break it down a bit.

The Triquetra, or Trinity Knot, is one of the most well-known Celtic symbols. Its exact meaning is hard to pin down, though it can mean a great many things all at once.

One universal belief is that the endless nature of the knot represents eternity.

As for the three points, it’s a common belief that they represent the holy trinity, though many would argue that the roots are deeper, relating to the ancient pagan belief system.

By joining two Trinity Knots to form the Serch Bythol symbol, it’s no stretch of the imagination to say that it represents the joining of two souls.

Each soul retains its individuality in terms of mind, body, and spirit, but the circle that is created by joining the two knots symbolises an endless unity between the two souls.

That’s why the Serch Bythol meaning is often considered a good choice for soulmates, two who are destined to be together for all eternity. It’s also why it’s often considered one of the best Celtic Symbols of love.

There are several Celtic symbols for family, including the Serch Bythol. It can also be used between family members and signifies the importance of strong familial links in Celtic culture.

Parents might give the knot to their children. Indeed, many see the Trinity Knot to represent the father, mother, and child.

By joining two together, it shows how, through the circle of life, death, and rebirth, everyone is connected—another important aspect of Celtic culture.

We’ve had a lot of questions over the years asking about everything from ‘What’s a good Serch Bythol tattoo?’ to ‘What does it symbolise?’.

What does Serch Bythol mean?

The Serch Bythol symbol is made from two Celtic knots / triskeles to symbolize the everlasting love between two people. The two defined yet closely intertwined parts represent two people joined together forever in body, mind, and spirit.

Is the Serch Bythol symbol real?

It’s hard to tell. There’s little information to determine whether it was used by the Celts. However, it’s made from two Trinity Knots, which were used by the Celts, so there’s an argument that it is a ‘real’ Celtic symbol.

I am writing a story w a curse. Love curse. Anything come to mind? I was thinking of making my own from combinations. Don’t want to give plot away.