If you’re looking for things to do in Louth, the Carlingford Greenway is a wonderful way to whittle away a few hours.

It can be cycled or walked and it’s a relatively easily trail to tackle, as it’s pretty flat for the most part.

You can park up in Carlingford Town (or Omeath, if you’d like to do the route from there), grab a bit of breakfast and then head off on your merry way.

In the guide below, you’ll find everything you need to know about the Carlingford to Omeath Greenway, from where to park to where to rent a bike.

Some quick need-to-knows about the Carlingford Greenway 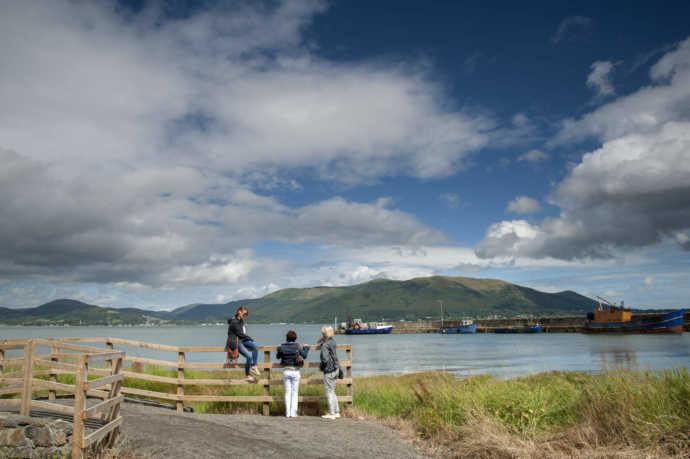 Although a spin along the Carlingford to Omeath Greenway is fairly straightforward, there are a few need-to-knows that’ll make your visit that bit more enjoyable.

Running along the south and western lough edge, the route stretches out from the Carlingford marina at one end, and into the village of Omeath at the other. The route takes in farmland, castles of former kings, historic shrines to saints, and stunning viewing points for Slieve Foye and Carlingford Lough.

With gently rising and falling slopes, the pathway covers a wide range of terrains and inclines. At present, the designated route is between 6 and 7 kilometres as it weaves its way from the Carlingford marina, and through Ballyoonan, Knockangoran, and finally into Omeath. However, the proposed extensions will increase this distance dramatically (see below).

If you walk the Carlingford Greenway, you can expect it to take around 2 hours in total, at a leisurely pace. If you’re cycling, it should take you around 50 minutes in total, depending on pace.

If you’ve ever dreamt of walking a cross-border Greenway, then this might just be the one for you! When completed, the Newry extension will join the Carlingford Greenway to Newry. The proposed extensions will mean the total length will be close to 20km and should take 3.5-4-hours to complete.

About the Carlingford to Omeath Greenway

Constructed in less than four months, between September 2016 and January 2017, the Carlingford Greenway shot up very fast, and quickly became one of the more popular walks in Louth.

Running in parallel to the A1/N1, known for being unfriendly towards cyclists, the Greenway offers those wanting to enjoy a slower pace of travel some of the most stunning scenery in Louth.

Since its official opening in 2018, walkers and cyclists have been able to enjoy unfettered views of Carlingford Lough, the Cooley Peninsula, and both the Cooley and Mourne mountains, as well as many historic sites including shrines, castles, and medieval villages.

In the near future, will have a Carlingford to Newry Greenway. This will be a 50+ kilometre long Greenway that stretches from Portadown in Northern Ireland to Greenore in Louth.

An overview of the Carlingford Greenway route

The Carlingford Greenway is a very handy route to follow. In the map above, you’ll find a rough overview of the trail along with info on where to get parking and where to rent bikes.

Now, you can always walk the Greenway if you fancy – you don’t have to rent a bike. But it really is a nice, handy cycle.

Whilst the route can be started from either end, Carlingford is a wonderful choice, as there’s so much more to see and do in the village when you get back. To start your Greenway adventure, head up the R173 to the Carlingford Marina.

Keep on going until you pass the restaurant on your right and you’ll see the entrance right in front of you.

Although the Carlingford to Omeath Greenway runs in parallel to the A1/N1, the two experiences couldn’t be more different. Away from the noisy traffic, you’ll enter a world of rolling fields and farmland, traverse through the old forest, and tread on the shadows of majestic mountains as you wander along the side of Carlingford Lough.

At each bend and turn, every dip and climb, you’ll have a chance to stop and take pictures of stunning scenery and make memories to last a lifetime. This easy walking route can be completed on foot or bike, from Carlingford to Omeath and back, with ease all in one day.

Things to do near the Carlingford Greenway

There’s plenty of things to do in Carlingford after you’ve finished your cycle, from food and hikes to scenic drives and more.

Below, you’ll find a handful of things to see and do a short walk from the Greenway.

1. Grab a post-walk/cycle feed in the town 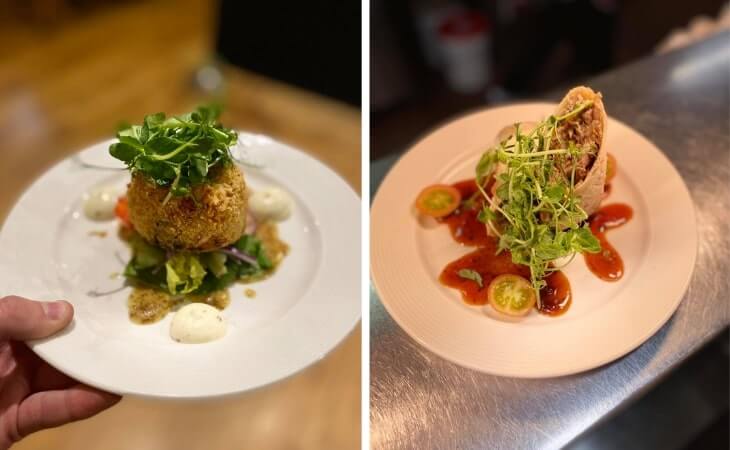 Photos via Schooners Restaurant on FB 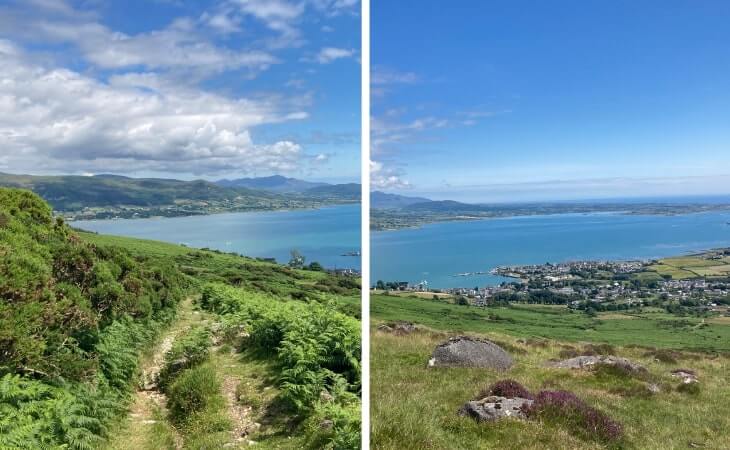 Looking for another challenge while you’re on the Cooley Peninsula? Then why not climb up Slieve Foye? There are a variety of National Walking Loops, some setting out from Carlingford, others from within more natural settings. Difficulty degrees are mapped and sign-posted clearly from Green (easier) to Red (hard).

3. Soak up the views on the Carlingford Ferry 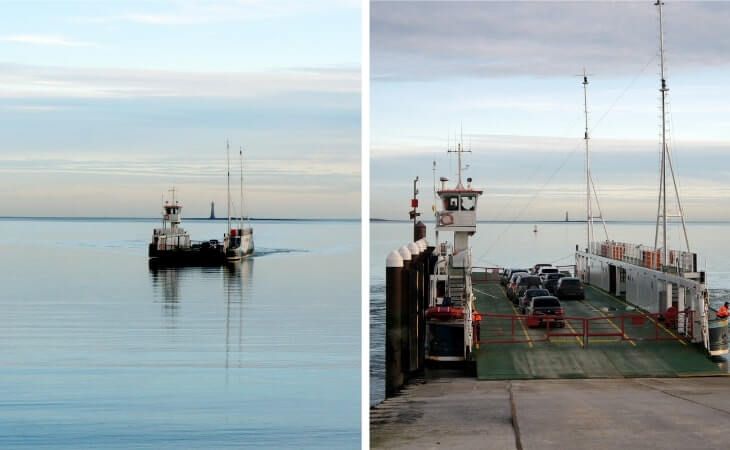 If you’re visiting during the summer months, then you’re in for a real treat. Head to Greenore and hop on one of the Carlingford Ferry evening cruises. You can take the regular car ferry, which takes 20 minutes, and be treated to stunning views during the crossing. 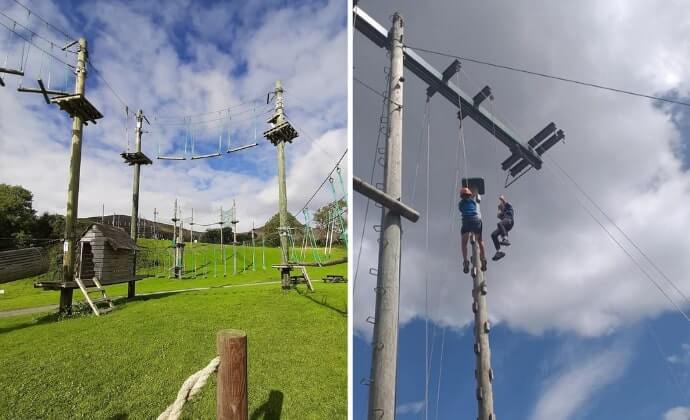 Photos via Skypark Carlingford on FB

Get your adrenaline on with a host of activities at the Skypark. Choose between navigating your way through a 3D maze, throwing axes or archery, aerial adventure course, or take aim with a game of Quazer. Other less fraught activities are also available, like footgolf or mini-golf.

FAQs about the Carlingford to Omeath Greenway

We’ve had a lot of questions over the years asking about everything from ‘How long is the Carlingford to Omeath Greenway?’ to ‘Which Carlingford Greenway bike hire is best?’.

How long is the Carlingford to Omeath Greenway?

At present, the designated route is between 6 and 7 kilometres. However, when it becomes the Carlingford to Newry Greenway, it’ll stretch for 20km.

How long does it take to walk and cycle the Carlingford Greenway?

If you’re walking, allow 2 hours in total. If you’re cycling, allow around an hour to finish the entire route.