The Casino Marino is one of the more unique places to visit in Dublin.

Completed in 1775, it took about 25 years to design and build the Casino (Little House) at Marino for the first Earl of Charlemont.

The Casino Marino is a prime example of Dublin architecture at its finest. And, while you can’t get inside at the moment, it’s still well-worth admiring from the outside.

Below, you’ll find info on everything from parking beside the Casino at Marino to the history of the beautiful building and its tunnels.

Some quick need-to-knows about the Marino Casino

Although a visit to the Casino Marino is fairly straightforward, there are a few need-to-knows that’ll make your visit that bit more enjoyable.

You’ll find it located approximately 4.5km from Dublin City Centre at Cherrymount Crescent in Marino. Bus numbers 123 and 41 stop nearby. It’s a 10-minute drive from Croke Park and just under a 20-minute drive from Glasnevin Cemetery.

The grounds reflected Lord Charlemont’s travels and included classical sculpture, captivating architecture, and exotic plants. All that remains of the buildings is the Casino, but the grounds are still a thing of beauty. You can stroll around the grounds and see the building from the outside.

Sir William Chambers designed the Casino Marino for James Caulfield in the mid-18th Century, and this perfect little building is often acknowledged as one of the primary examples of neoclassical architecture in Ireland. Caulfield, 1st Earl of Charlemont, favoured Italian influences and named the Casino after the town of Marino in Lazio. 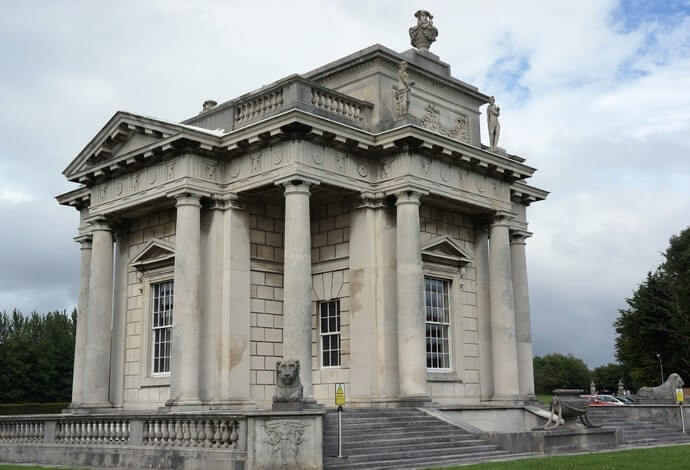 James Caulfield, the first Earl of Charlemont, inherited Marino House in the mid 18th Century. He had spent nine years exploring Europe and even visited Asia.

When he returned to Ireland, he had the Marino Casino designed and built to express his love of classical architecture. The building seems to be a one-room temple from the outside, but it actually contains 16 rooms over three floors.

The style of the building

The Casino sits on a podium, designed like a Greek temple. From above, it looks like a Greek cross. Steps lead up to a door on the north side, and lions sit on each corner of the podium—they were supposed to be fountains, but they were never completed.

Design features include ornamental urns and statues of Roman gods. Interestingly, the architect preserved the aesthetics of the building by having urns on the roof act as chimneys, and rainwater ran through columns into the basement.

The door appears to be almost the full height of the building, but only a part of it opens, and the tall windows are subdivided between rooms.

Although the rooms are small, they don’t seem overcrowded, e.g. the vestibule appears large, an illusion achieved by using a semicircular apse giving access to the three principal rooms. The ornamental focus of the vestibule is its rare intricate floor, made from several exotic timbers.

The two side doors in the room are disguised as wall sections—one leads to the Zodiac Room, and the other to the China Closet. The middle door leads to the saloon and is hung with its original blue silk fabric, pieces of which were found during the renovation.

The main upstairs room is the State Bedroom, another elaborate room with gold and white columns and bright turquoise walls.

Several tunnels run under the Casino at Marino, one of them said to have been used by Michael Collins to hide out during the Irish revolution. The Casino fell into disuse at the beginning of the 20th Century, and the OPW took it over in the 1930s.

So, the tours of the Casino at Marino aren’t running at the moment, from what we can tell, so you can only admire it from the outside.

There’s also a virtual tour, if you’d like to have a peek inside its magnificent walls before you visit.

1. Park at the grounds and admire it from the outside 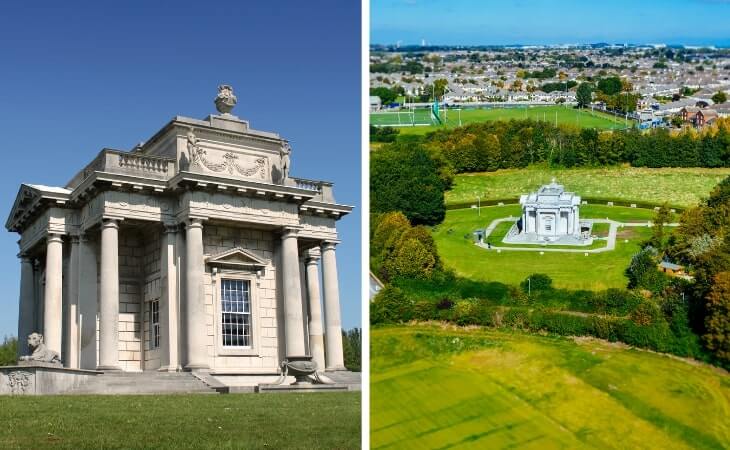 If you can’t go inside the Casino, there is plenty to admire from the outside. Car parking is available on site. The Casino sits on a square raised podium or platform and has been guarded at each end by Lion sculptures for approximately 250 years.

You can view a virtual tour and watch a short video presented by a tour guide by visiting the Casino at Marino’s website.  The video is full of fascinating information and shows the beautiful ornamental aspects of the rooms in great detail.

It’s thought that Chambers didn’t design the upper rooms, the Stateroom, for instance; (this may be due to unpaid bills?), as it’s much more ornate than the rooms downstairs.

I was quite pleased to see the tunnels online – I don’t think I’d have been so keen to see them in person. Worth a look if you’re interested in the Casino’s history.

Places to visit near the Casino at Marino

One of the reasons that a visit to the Casino Marino is up there as one of the most popular day trips from Dublin is due to the volume of things there are to do nearby.

Below, you’ll find everything from one of the finest parks in Dublin and the brilliant Glasnevin Cemetary to one of our favourite walks in Dublin. 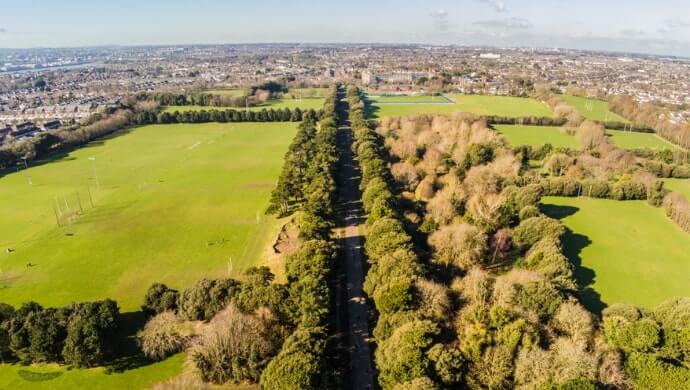 Former home of the Guinness family, St Anne’s Park is a gorgeous place to visit any time of year. The rose garden has international significance, and you can visit the rose festival on the 3rd weekend of July. The park offers a playground, playing pitches, tennis courts, boules and a par-3 golf course. 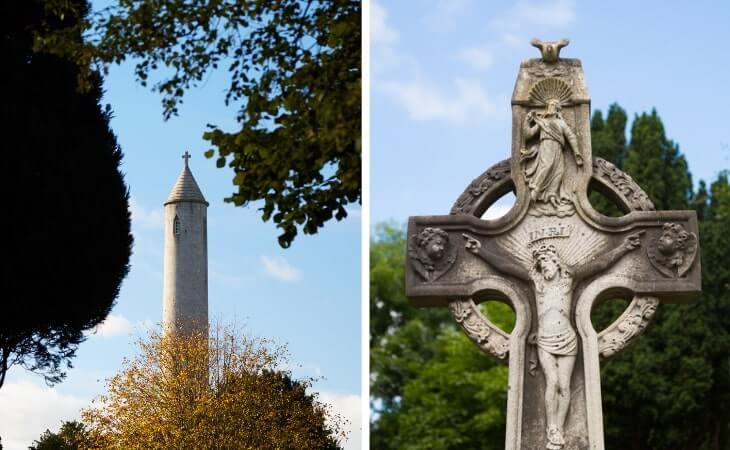 Until Glasnevin Cemetery opened in February 1832, Irish Catholics had no cemeteries of their own. By the end of that Century, over 800,000 people were buried there in unmarked graves because of the Great Hunger and a cholera epidemic. The cemetery has grown from nine acres in 1832 to over 124 acres today. It was the first crematorium in the Irish Republic with cremations offered since 1982 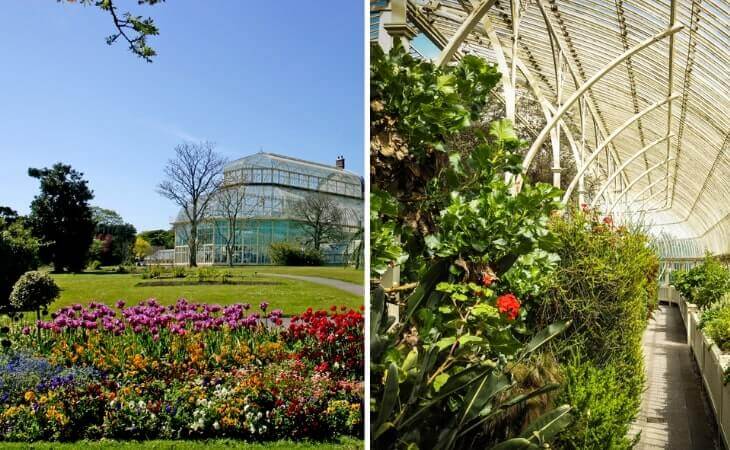 The (Royal) Dublin Society founded the Botanic Gardens in 1795 and are owned by the Office of Public Works. Over 20,000 living plants are grown here, and there are also millions of dried specimens. The gardens are active in biodiversity, conservation and sustainable development.

FAQs about the Casino at Marino

We’ve had a lot of questions over the years asking about everything from ‘Can you go inside the Casino in Marino?’ to ‘Is there parking at the Marino Casino?’.

Is the Casino Marino open to the public?

Yes and no – the grounds of the Casino at marino are open to the public, the building itself is not.

Is there parking at the Casino at Marino?

Yes. There’s a bit of parking right next to the Marino Casino. See guide above for its position on Google Maps.