Clifden Castle is a beautiful ruin overlooking the water on Ireland’s west coast.

It’s not your run-of-the-mill tourist destination, but it’s beautiful architecture and rural setting make it a wonderful place to spend an hour or two.

Below, you’ll find everything from how to reach it and where to park to the history of Clifden Castle.

Some quick need-to-knows about Clifden Castle 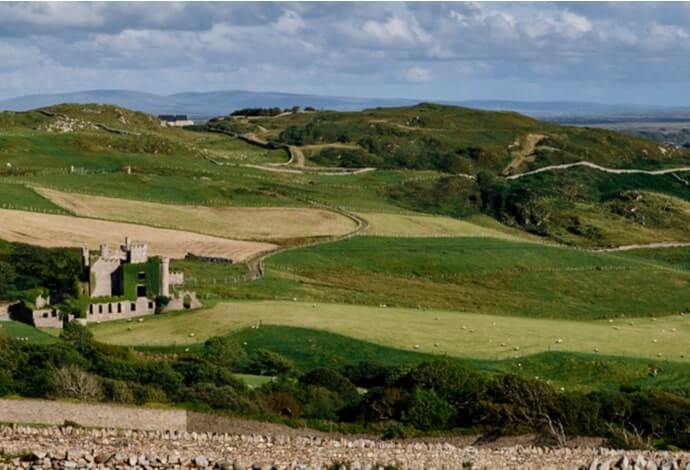 Photo by Jef Folkerts on Shutterstock

A visit to the castle in Clifden isn’t as straightforward as many of the other castles in Galway, so take 20 seconds to read the points below:

Clifden Castle can be found in the Connemara region in County Galway. It is just off Sky Road, less than 3km from Clifden town. The castle is 80km from Galway City (roughly 1 hour and 20 minutes away by car).

Clifden Castle has very limited parking. Driving along Sky Road, look out for the old castle gates (a beautiful stone archway with two towers). In front, you will see a small triangular patch of gravel with enough room for three to four cars (here on Google Maps).

From the parking area, there’s a short 1km walk to reach the castle. Pass through the old castle gates and follow the gently winding path through horse pastures and fields. Along the way, keep an eye out for the mock standing stones that the original owner, John D’Arcy, had built in honour of his children.

The walk to the castle is down an uneven gravel track that at times can get mucky and wet, especially after it’s rained! Proper footwear is a must, and those with limited mobility may find the walk challenging.

The castle is in ruins and you enter at your own risk. The castle itself also sits on private land, so please show respect and, as always, leave no trace behind you.

The history of Clifden Castle 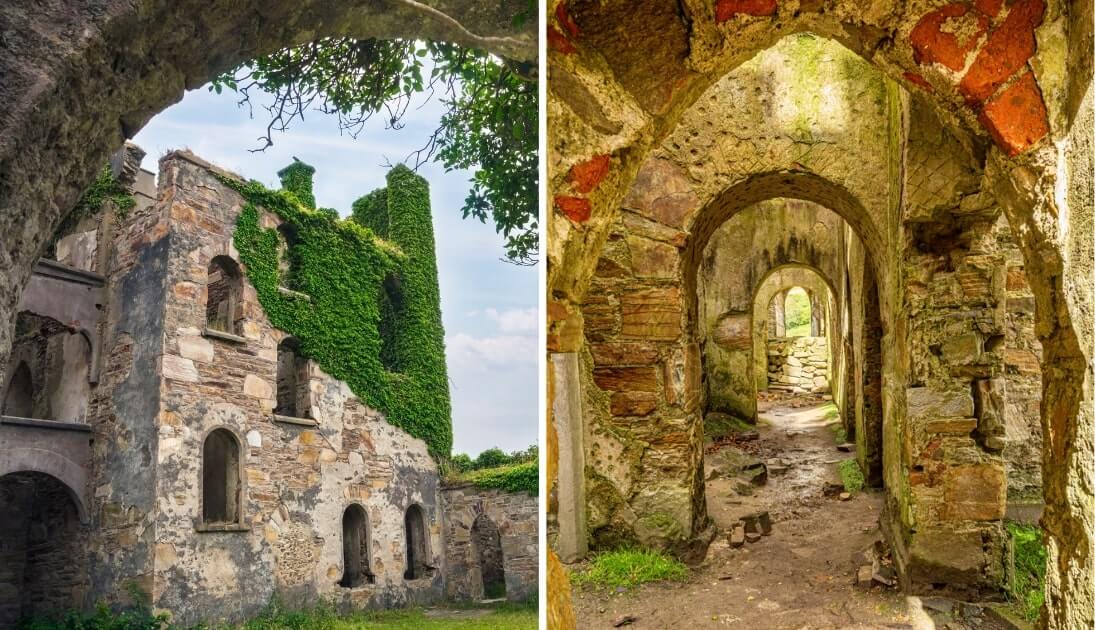 Clifden Castle or “Caislean an Clochán”, is a beautiful ruined manor house overlooking the coast in the Connemara region. It was constructed in 1818 for John D’Arcy, the founder of nearby Clifden.

The castle was built in the Gothic Revival style, with pointed arched windows and doors, several towers, and two round turrets. It served as the D’Arcy family’s main residence for several decades, alongside the 17,000-acre estate it belonged to.

In 1839 when John D’Arcy passed, the castle fell under tumultuous times when his eldest son Hyacinth D’Arcy inherited the estate.

Unlike his father, Hyacinth wasn’t well-equipped to manage the family’s properties and tenants, and during the Great Famine, their troubles grew when many of the D’Arcy’s tenants emigrated elsewhere causing them to lose rental income.

Eventually, the family went bankrupt, and in November 1850 several of the family’s properties, including Clifden Castle, were put up for sale.

The castle and lands were purchased by two brothers from Bath, Charles and Thomas Eyre, for a sum of 21,245 pounds.

The brothers used the castle as their holiday home until 1864 when Thomas bought Charle’s share and gave the castle and surrounding estate to his nephew, John Joseph Eyre.

When John Joseph passed in 1894, the running of the estate was left to agents and the castle began to fall into disrepair.

Later on, the estate, not including the castle demesne, was sold to the Congested Districts Board/Land Commission. In 1913, the castle demesne was offered to the board for a sum of 2,100 pounds, to be sold on to former remnants, but no sale was ever made.

In 1917 the castle and lands were bought by a local butcher, J.B. Joyce, in a highly controversial sale. The land around the castle was highly coveted and several former tenants had been using the castle grounds to expand their own farms.

The townspeople turned against Joyce and proceeded to run him and his cattle off the land, and replace it with their own.

In 1920, a Sinn Féin arbitration court decided that Joyce should sell the land and it was divided and shared between the tenants.

The tenants were given collective ownership of the castle, and they stripped the castle of its roof, windows, timber, and lead, and it fell into ruin.

Things to do near Clifden Castle

One of the beauties of the castle in Clifden is that it’s a short spin away from many of the best places to visit in Galway.

Below, you’ll find a handful of things to see and do a stone’s throw from Clifden Castle (plus places to eat and where to grab a post-adventure pint!). 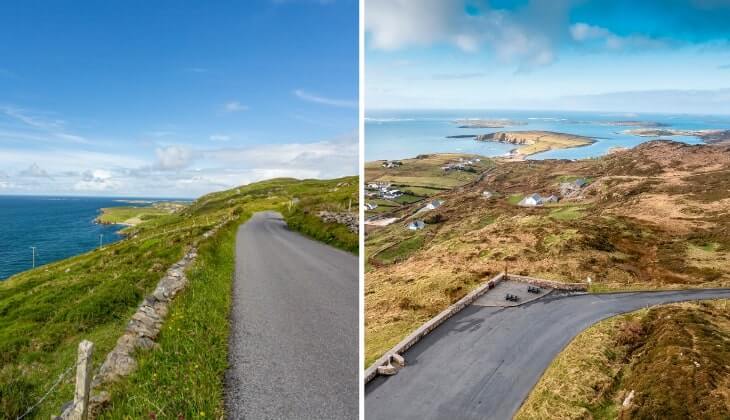 The Sky Road loop is a breathtaking 16km circular route starting from Clifden and heading west onto the Kingston peninsula. The road passes by Clifden Castle, and shortly after the castle gates, it separates into the lower and upper roads. The lower road has close-up views of the coast, but the upper road is more popular with stunning views of the whole area. 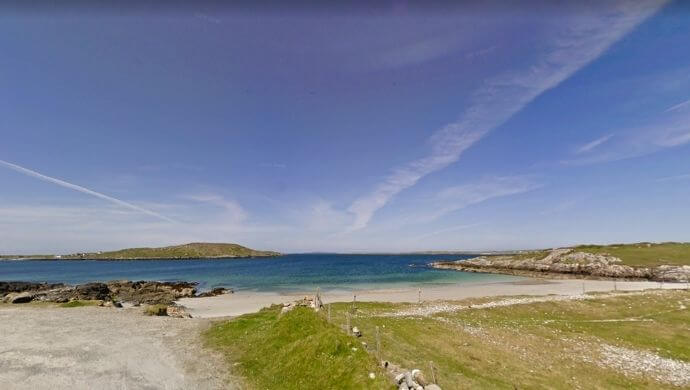 Eyrephort Beach is just off the Sky Road loop and it’s one of the quieter beaches near Clifden. It is a small sheltered beach with white sand and clear blue waters. From the beach, there are fantastic views of nearby islands Inishturk South and Inish Turbot. 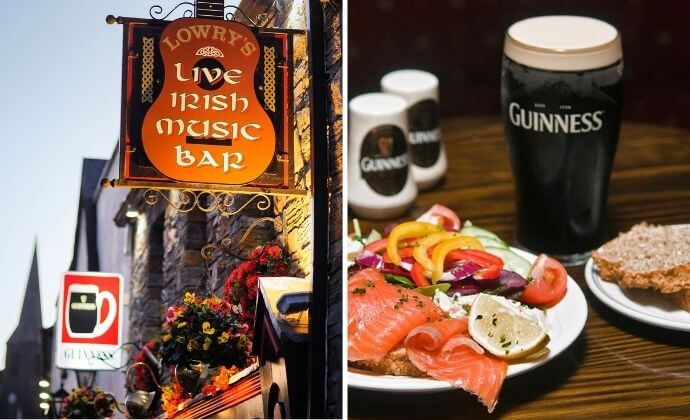 There are some excellent restaurants in Clifden. Ravi’s Bar on Market Street serves comfort food like fish and chips, chicken curry, and pizzas. They have a covered terrace with amazing views of the water. Mitchell’s Restaurant is a top choice if you’re craving seafood and their seafood platter is a must-try! 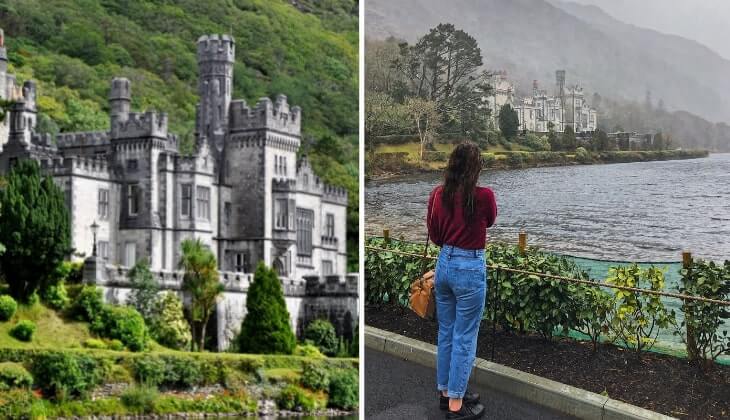 Kylemore Abbey is hands down one of the most beautiful castles in Ireland. Its lakeside setting at the foot of Twelve Bens Mountains makes you feel as if you’ve stepped into a fairytale. The abbey has stunning Neo-gothic architecture and the Victorian walled garden is breathtaking.

FAQs about the castle in Clifden

We’ve had a lot of questions over the years asking about everything from ‘Where do you park?’ to ‘How long is the walk?’.

Is Clifden Castle open to public?

Clifden Castle is on private property, but the walkway down to it is, at the time of typing, open to the public. Just please be respectful.

When was Clifden Castle built?

Clifden Castle was constructed in 1818 for John D’Arcy, the founder of nearby Clifden.