What is the drinking age in Ireland? How old do you have to be to drink in Ireland?

We get these questions a lot. And it’s no mystery why – Ireland is famed for its pub culture and our little island is home to some of the best pubs in the world.

People visiting Ireland with their kids tend to (not always) want to visit a pub during their time in Ireland, but they can often be unsure about what is and isn’t OK.

Drinking laws in Ireland may prevent some (or all) of your party drinking during their visit to Ireland.

In the guide below, you’ll find everything you need to know about the legal drinking age in Ireland and the many Irish drinking laws.

What is the Legal Drinking Age in Ireland? 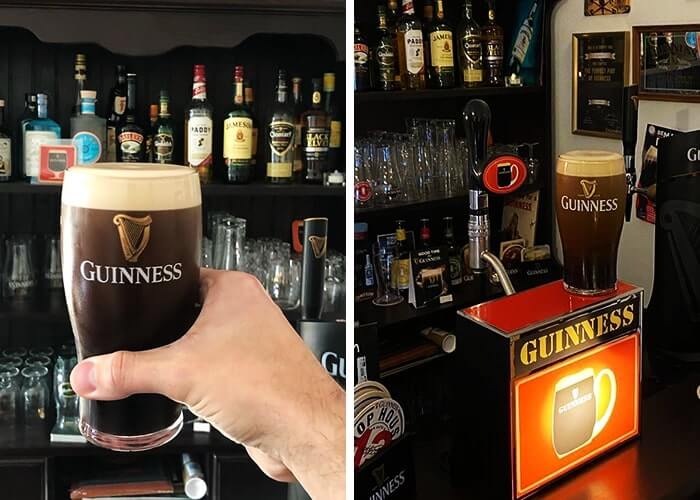 Ireland’s drinking laws are pretty crystal clear – the legal drinking age in Ireland is 18. That means you need to be 18 to buy a drink in a pub or to buy any form of alcohol from a store.

Now, if you’re thinking, ‘Well, if I get my mate’s brother to buy me a bottle of Irish whiskey it’s not technically illegal’, you’d be wrong… the drinking age in Ireland is 18 for consumption, also!

A book and a pint at the Shandon

There are a number of Irish drinking laws that both those of legal drinking age in Ireland and those below it should be aware of.

These laws relate to:

Here are some of the most important things to know about the drinking laws in Ireland. Read them carefully before you arrive.

1. Drinking and driving is never OK in Ireland

According to the Road Traffic Act 2010, it is illegal to drive a vehicle in Ireland while under the influence of alcohol. Read more about this in our guide to driving in Ireland.

2. You may have to prove that you’re the legal drinking age in Ireland in some places

If you go to buy alcohol, regardless of whether it’s in a pub or a shop, you may be asked to show ID to prove that you’re over 18.

If you go to enter a premises that has a bouncer/doorman, you may be also asked to prove that you’re above 18. If you’re visiting from abroad, bring your passport – but be careful with it!

3. Visiting a bar with someone below the age of 18

Let’s say that you’re visiting Ireland with your son who’s just gone 16. You want to drop into a pub and listen to some live music, but is it allowed?

Well, kinda. Under 18s can stay in a pub between 10:30 and 21:00 (until 22:00 from May to September) if they are accompanied by a parent or guardian. Now, without naming names, some places in Ireland are more lax about this than others.

You’ll often see people that are below the legal drinking age in Ireland sat in a pub after 21:00. You’ll also often see bar staff informing parents that they need to leave once 21:00 arrives.

Each local authority has the ability to pass by-laws that prohibit the consumption of alcohol in a public place.

Your best bet here is to just avoid doing it. The only real exception when it comes to drinking in public is when there are live events or if one of the various Irish music festivals is taking place (check the rules in advance).

For example, in Galway during race week, you’ll find the streets buzzing with people drinking from plastic cups that have been served from some of the city’s pubs.

5. Being drunk in public

There’s a very clear Irish drinking law for being drunk in public. Under the Criminal Justice Act 1994, it’s is an offence for a person to be so drunk in a public place that:

6. The Drinking age in Ireland with parents

According to Irish law, if you are travelling to Ireland with your child and they’re under 18, you can grant them permission to drink alcohol once it’s in a PRIVATE RESIDENCE.

This doesn’t mean that you’ll be able to give them permission to drink in a pub or a restaurant or a hotel bar – it’s for private residences only.

FAQ About the Ireland Drinking age and Drink Laws in Ireland

In the section below, I’ve popped in as many of the most FAQs that we’ve received about the drinking age Ireland enforces.

If you have a question that we haven’t tackled, feel free to ask it in the comments section at the end of this guide.

I’ve heard the Dublin drinking age is different – can you explain?

We’ve had a number of emails over the years mentioning the ‘Dublin drinking age’. I can’t for the life of me figure out where this came from but what I can tell you is that it isn’t a thing.

The drinking age in Dublin is the exact same as it is anywhere else in Ireland – it’s 18, plain and simple.

What do Irish drinking laws say about drinking in a bar with your Mom and Dad?

The drinking age Ireland enforces is 18. You can’t drink in a pub or buy alcohol full stop unless you’re 18 years of age. It doesn’t matter if your parents say it’s OK.

How old do you have to be to drink in Ireland if you’re just visiting?

This question always baffles me. If you’re visiting Ireland, you abide by the laws here. This means that you need to adhere to Irish drinking laws. You need to be 18 to drink in Ireland.

What’s the drinking age in Ireland if you’re going to remain in your hostel?

It. Is. 18. The only way that someone below the age of 18 can legally drink alcohol in Ireland is it they’re in a private residence and if they have parental permission.

I’m honestly excited to visit Ireland. I’m about 50% Irish since my great grandparents on my mom’s side came from Ireland. It’s why I have red hair! I turn 20 in February and I’m going to Galway. Now I know I can drink there too.