The now-iconic Drumcliffe Church (St. Columba’s Church) in Sligo is famed for being the final resting place of Ireland’s most beloved poet – W.B. Yeats.

Although there’s some controversy about Yeats’ final resting place, Drumcliffe Church is at the heart of Yeats’ County, and the scenery that surrounds it is outstanding.

In the guide below, you’ll discover the story of Drumcliffe Church, the controversy around W.B Yeats’ Grave and what to visit nearby. 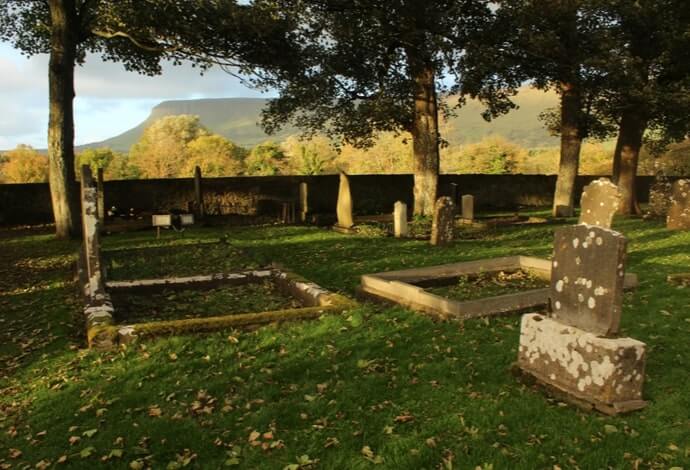 Although a visit to Drumcliffe Church & W. B Yeats’ Grave is fairly straightforward, there are a few need-to-knows that’ll make your visit that bit more enjoyable.

Backed by the spectacular Benbulben Mountain, the area is surrounded by gorgeous scenery, with rolling green fields all around. The iconic church lies just outside of the main village, standing proud alongside the main road.

Drumcliffe Church is perhaps best known for being the final resting place of W.B Yeats. His humble grave can be found in the churchyard, the simple headstone featuring no marble or other expensive materials. The inscription reads; “cast a cold eye on life, on death, horseman, pass by”, and was penned by Yeats himself as his final epitaph.

4. The Coffee shop and craft shop

After exploring the fascinating church and graveyard, there’s a handy coffee shop on-site. You’ll find a range of home baked goods available, as well as a wonderful cup of coffee, ideal for a moment of reflection. Meanwhile, the craft shop is home to a number of prints and quality crafts.

The story behind Drumcliffe Church and W. B Yeats’ Grave 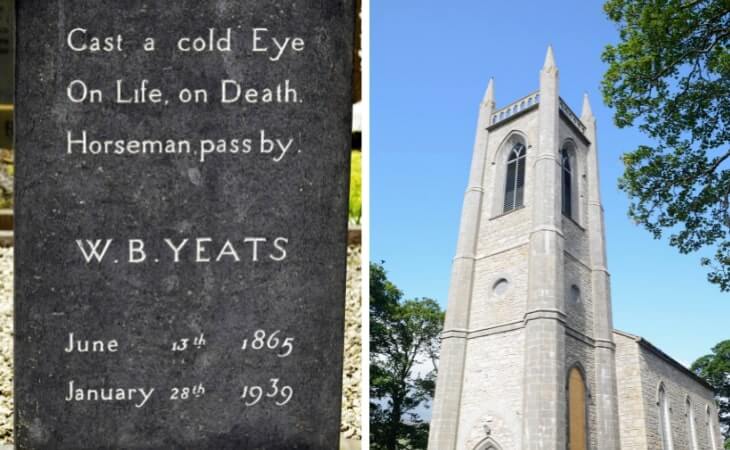 While Drumcliffe Church is indeed the final resting place of William Butler Yeats, it wasn’t the first place he was buried after his death. W.B Yeats died in 1939 at the age of 73, and had long since made plans as to where he’d like to spend eternity.

Describing his wishes through poetry, he left plenty of clues in the last verse of his poem, ‘Under Benbulben’, which conveys his love for Sligo and the county’s outstanding scenery.

He was buried in France

Drumcliffe Church stands in the shadow of the mighty Benbulben, and so Yeats truly is now ‘Under Benbulben’. But it was a bit of a journey to get there.

Yeats actually died in Menton in France. Before his passing, he requested that he buried there, first, before being moved to Sligo. His hope was that the newspapers would have forgotten him by then.

However, possibly due to the outbreak of World War 2, the reinterment wasn’t exactly smooth sailing, and it took much longer than a year.

His remains were exhumed after the war, but authorities mixed them up with other remains in the ossuary.

A skeleton was eventually pieced together by a French forensic doctor, and in 1948, what was left was finally buried in the poet’s beloved Sligo, under Benbulben, in an area now affectionately known as Yeats Country.

Drumcliffe Church is also well worth a look

While many visitors focus on seeing the grave of W.B. Yeats, it’s well worth taking a look around Drumcliffe Church as well.

Set on the site of a 6th century monastery, Drumcliffe Church (otherwise known as St. Columba’s Church) features a striking tower that looms over the ancient graveyard.

Three high crosses remain of the former monastery, as well as the stump of a round tower, just across the road. The most impressive of the high crosses dates back to the 11th century.

Made from sandstone, this intricately decorated piece of stone masonry has been amazingly well-preserved. The views from Drumcliffe Church, as you can see in the video above, are breath-taking.

Things to see near W. B Yeats’ Grave

One of the beauties of a visit to Drumcliffe Church & W. B Yeats’ Grave is that it’s a short spin away from many of the best places to visit in Sligo.

Below, you’ll find a handful of things to see and do a stone’s throw from Drumcliffe Church (plus places to eat and where to grab a post-adventure pint!). 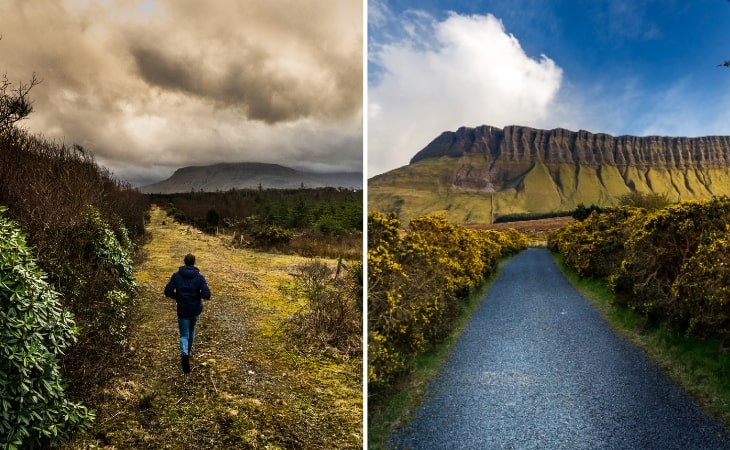 This impressive, flat-topped, rock formation looms in the background of Drumcliffe Church. It looks stunning from a distance, but the views on the brilliant Benbulben Forest Walk are sensational. 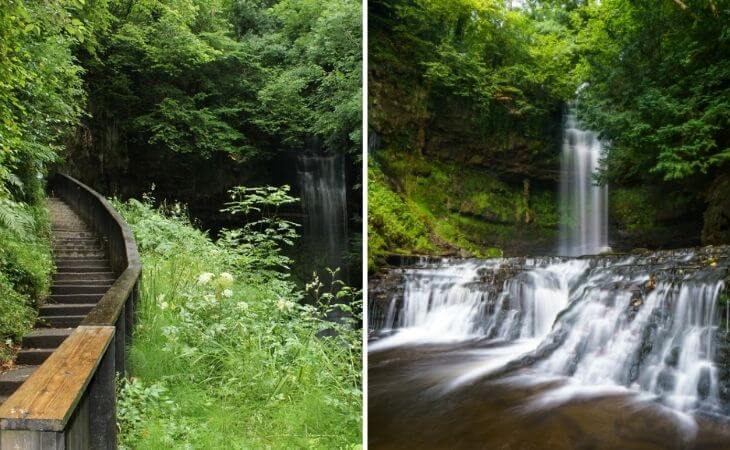 Crashing down from 50 ft high, the majestic Glencar Waterfall is a wonderful place to visit. Hidden just a short walk through the woods, it offers a magical atmosphere, and it’s easy to see why W.B Yeats took such inspiration from it. In fact, the waterfall appears in his poem, ‘The Stolen Child’. 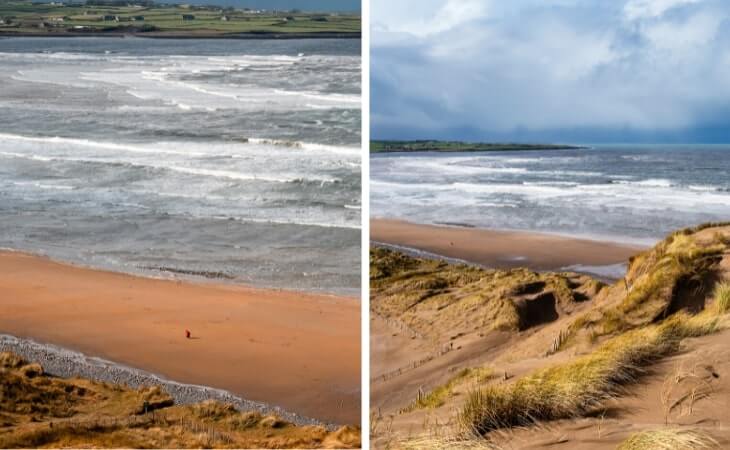 The seaside village of Strandhill is just a short drive from Drumcliffe Church, and it’s a superb place to spend the afternoon. If you’re hungry, there are several great places to eat in Strandhill, while the sandy Strandhill Beach is a pleasure to stroll along. 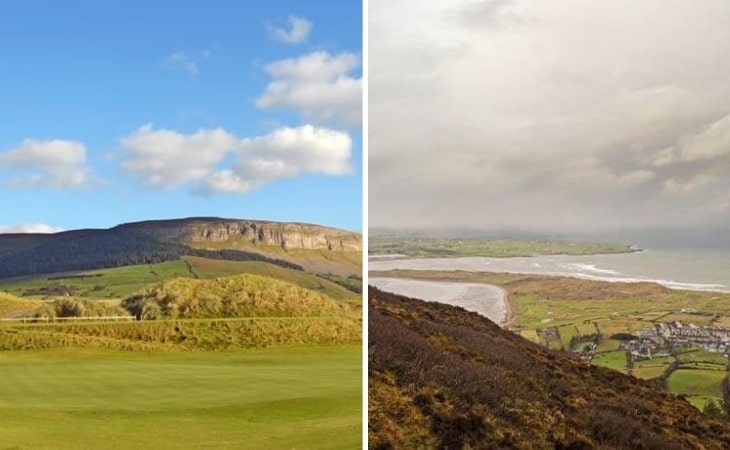 Drumcliffe Church & W. B Yeats’ Grave is short spin some of the best beaches in Sligo along with many of the best walks in Sligo. Here are our favourites:

We’ve had a lot of questions over the years asking about everything from where in Sligo is W.B Yeats buried to what there is to see at Drumcliffe Church.

Where is the grave of WB Yeats?

Yeats is buried in the scenic grounds of Drumcliffe Cemetery in County Sligo.

What is written on Yeats’ grave?

Cast a cold eye on life, on death, horseman, pass by.

What is there to do at Drumcliffe Church?

There’s a 30-minute audio tour of Drumcliffe Church that’ll help you discover the story of the Church and the people that lived nearby over the years. You can also nip into the teahouse for a coffee and a light bite.