As is the case with the Shankill Road, the Falls Road has played a significant part in Belfast’s modern history.

From the Bobby Sands mural to the Solidarity Wall, some of Belfast’s most iconic images are found in and around the Falls Road.

But the story behind those images is one of pride, identity and conflict. The feeling of community on the Falls Road runs deep and below, you’ll discover how it all started.

Some quick need-to-knows about the Falls Road in Belfast 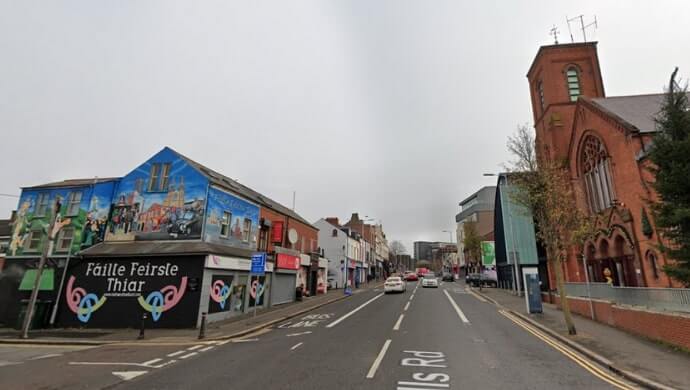 A visit to the Falls Road is fairly straightforward, but there are a few need-to-knows before you go (it’s worth understanding the difference between Northern Ireland and Ireland, also!).

Heading west out of Belfast city centre along Divis Street before swinging southwest, the Falls Road meanders two miles (3.2km) through the large Catholic part of West Belfast and goes as far as Andersontown.

With its proximity to the nearby Loyalist Shankill Road, violence and tensions were never far away from the Falls Road during The Troubles. The notorious Falls Curfew in 1970 was one of its most famous flashpoints.

Due to the violence of August 1969, the British Army built a Peace Wall along Cupar Way to separate the Shankill and Falls roads, thus keeping the two communities apart. 50 years later, the wall is still in place.

The Falls Road is easy enough to reach on foot from Belfast city centre though we’d recommend taking a walking tour or a Black Cab tour for the most illuminating experience. Also, we wouldn’t recommend visiting the area late in the evening.

The early days on the Falls Road 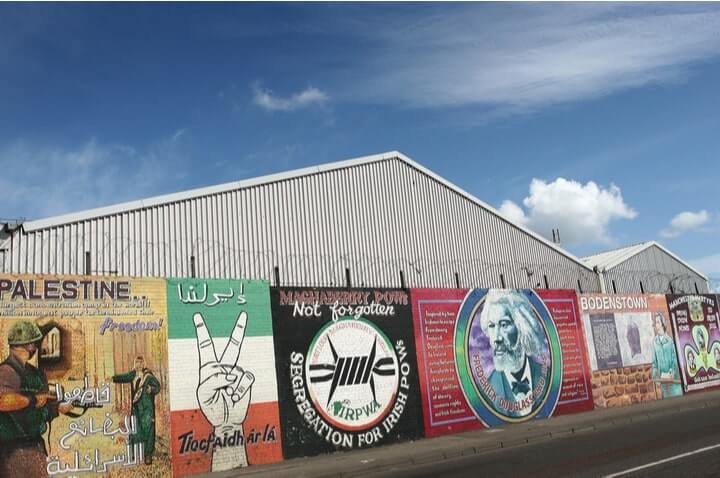 Once a country lane leading out from the town of Belfast, the Falls Road takes its name from the Irish túath na bhFál (territory of the enclosures) which survives in its modern-day form as the Falls.

The original extent of the territory was roughly equal to the civil parish of Shankill and it comprised the greater part of the Co. Antrim portion of the modern city of Belfast.

By the time of the 19th century, the Falls Road’s time as a country lane was swiftly coming to an end as the Industrial Revolution was in full swing and large linen mills began popping up all over west Belfast.

With the linen industry booming, it became the main source of employment in the area and began attracting people to live nearby.

The Falls Road and the start of The Troubles 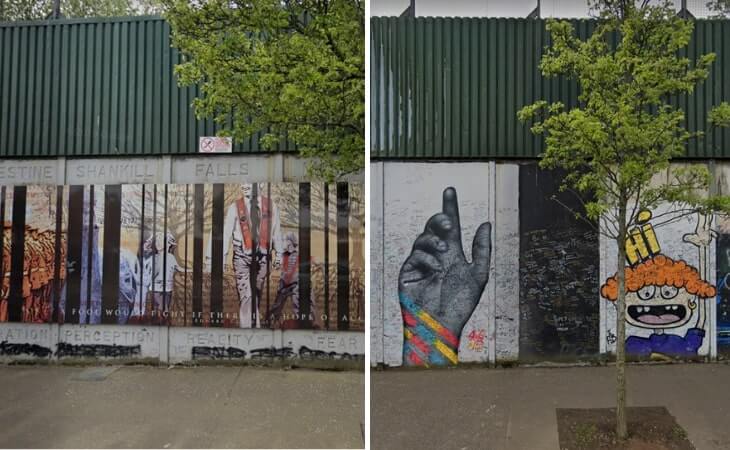 The infamous riots of August 1969 saw 6 Catholics killed and several streets burnt out near the Falls Road. Though the British Army came in to protect Catholics from further attacks, their heavy-handed tactics alienated many of the residents in the area.

The following year in 1970 saw the notorious Falls Curfew, a 2-day search for weapons in the Catholic neighbourhood where the British Army sealed off the area of 3000 houses and imposed a 36-hour curfew. The incident turned into an ugly battle between the Army and residents involving CS gas that devolved into a gun battle with Provisional IRA members.

Despite the presence of the ‘Peace Wall’ on Cupar way, there was still plenty of violence in the years that followed and the Falls Road saw some of the worst of it.

Not only were Loyalist paramilitaries a constant menace, the British Army also maintained a significant presence on the Falls Road, with a base on top of Divis Tower.

The last British soldier to be killed on the Falls Road was Private Nicholas Peacock in 1989, the result of a booby trap bomb left outside of the Rock Bar pub. A cycle of tit-for-tat killings between the IRA and Loyalists continued in Belfast until 1994, when the IRA called a unilateral ceasefire. 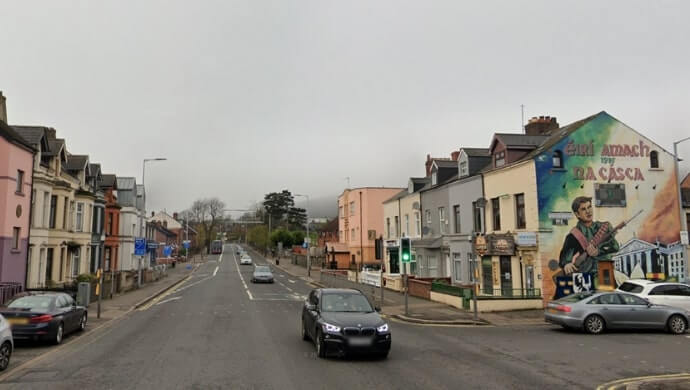 That ceasefire followed by the Good Friday Agreement in 1998 meant the violence in West Belfast eased greatly. While the two communities still have their distinct identities and tensions flare occasionally, there is nowhere near the degree of conflict that the city saw during The Troubles.

In fact, those differences between the two communities have become something of a curiosity for visitors and have turned a turbulent street into one of the more popular places to visit in Belfast.

Attracted by its fiery recent history and the colourful murals showing off the pride of the community, you can take a Black Cab Tour of the Falls and hear from locals all about what life was like during the tempestuous Troubles.

Erected in 1998 and featuring his smiling face beaming out, the Bobby Sands mural on the corner of Sevastopol Street is arguably one of the most famous landmarks in Northern Ireland, let alone Belfast.

We’ve had a lot of questions over the years asking about everything from is the Falls Road Protestant or Catholic to what did the Falls Road curfew involve.

Is The Falls Road dangerous?

We’d recommend visiting the Falls Road in Belfast early in the day, or as part of a guided tour. Avoid at night.

Why is The Falls Road famous?

The Falls Road and the area that surrounds it saw a significant amount of conflict over the years which attracted worldwide attention.

What was The Falls Road curfew?

The Falls Road Curfew was an operation carried out by the British Army in July of 1970. It began as a search for weaponry, but it progressed into clash between the Army and the IRA. The Army went on put a curfew in place on the area for a day and a half.

I was in Belfast in 1971. A young 18 year old American girl who decided to go and visit the country. Little did I know what I would encounter and experience. It is still surreal that I was there during a significant period of history in that region.