If you’ve laid eyes on the Belfast murals (or the more modern Belfast street art) you’ll known that no city bears its character as colourfully as this one.

And while the political messages on the murals in Belfast are deeply entrenched, they’re also often (not always!) stunning works of art that are unique to the Northern Irish capital.

In the guide below, you’ll get a closer look at some of the most prominent murals from both the Republican and Loyalist areas of Belfast.

You’ll also discover the story behind them and how you can experience them on one of the Belfast murals tours. Dive on in!

Republican and Nationalist murals in Belfast 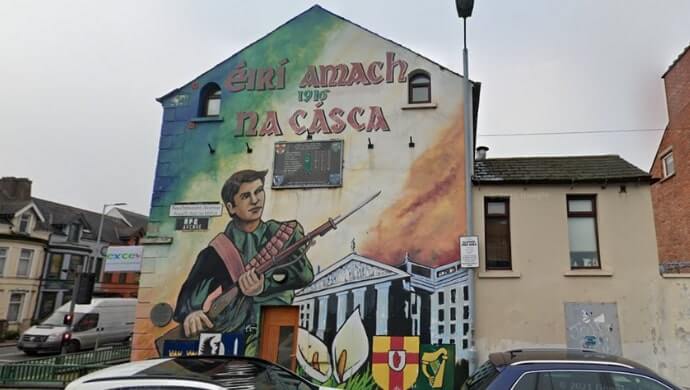 Though Belfast is a vibrant and largely peaceful city today, it was and still is divided along religious and cultural lines – the same ones that were the cause of so much violence during The Troubles.

From the late 1970’s however (and particularly after the death of Bobby Sands in 1981), the people of Belfast began expressing themselves in a more creative way.

If the above has you scratching your head, see our guide to the differences between Northern Ireland vs Ireland. 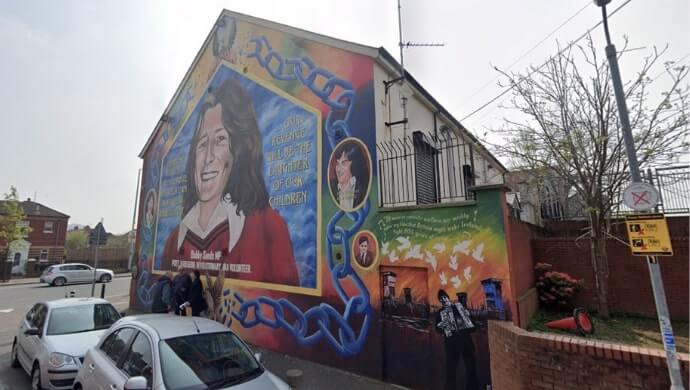 Arguably Belfast’s most famous mural (certainly the most well-known of the Republican side), this smiling portrait is a tribute to IRA volunteer Bobby Sands who died in prison on hunger strike in 1981. 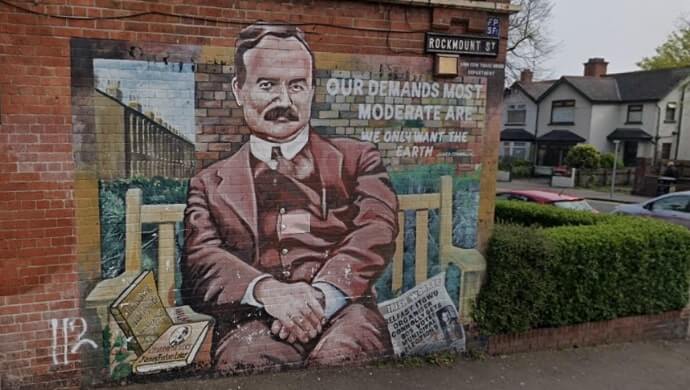 A prominent leader in the 1916 Easter Rising in Dublin, the mural on Rockmount St sees James Connolly seated on a bench flanked by books and newspapers alongside one of his well-known quotes. 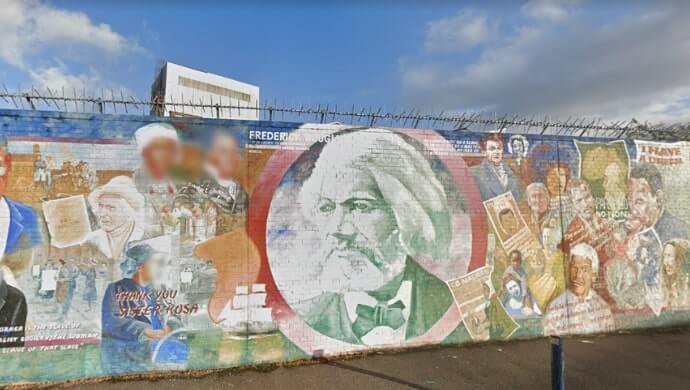 An iconic black American campaigner and statesman, Frederick Douglass’s mural depicts his portrait (with his customary shock of grey hair) while flanked by words of solidarity for the Irish cause.

4. Building an Ireland of Equals 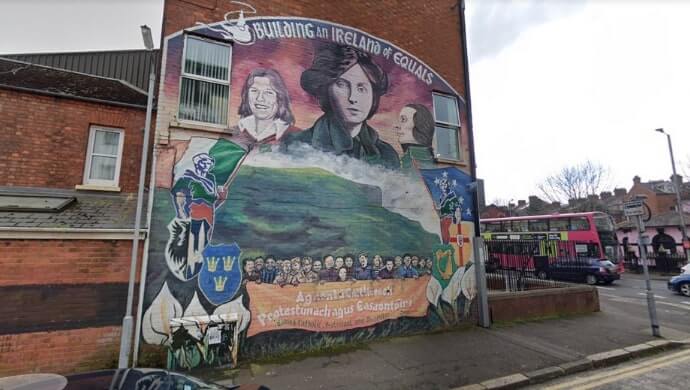 With the Napoleon’s Nose section of Cave Hill in the centre, Building an Ireland of Equals on Oceanic Avenue prominently displays the faces of Bobby Sands, Wolfe Tone and suffragist Winifred Carney. 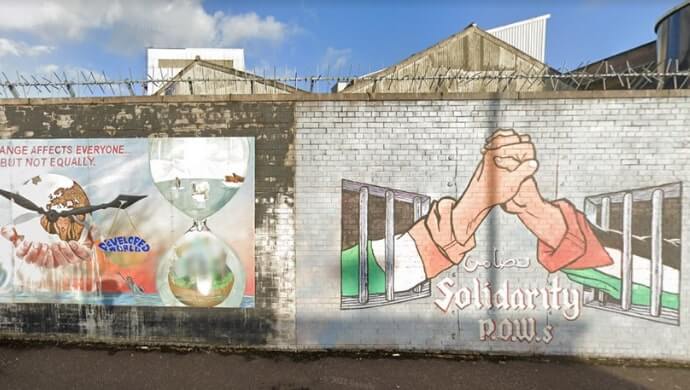 The Falls Road, also known as the Solidarity Wall, this features a collection of murals and artwork expressing support for global causes such as Palestinian liberation and Basque freedom. 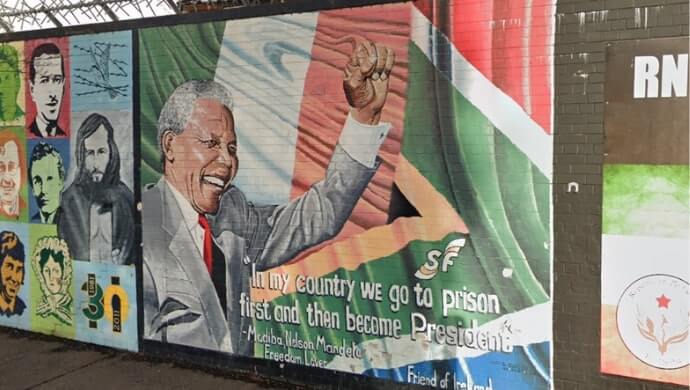 A tribute to arguably the most famous freedom fighter of them all, this mural shows Nelson Mandela smiling with his fist raised and the words ‘friend of Ireland’ written below. 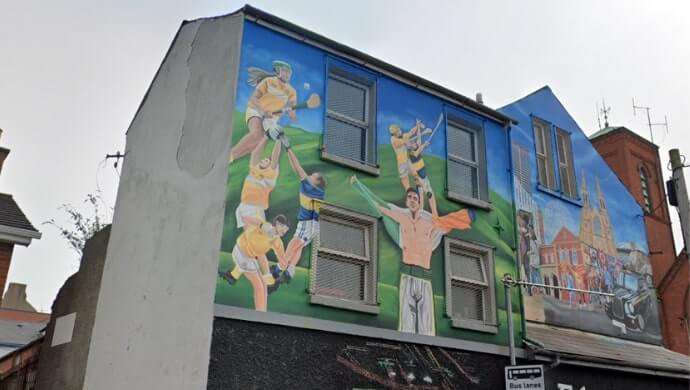 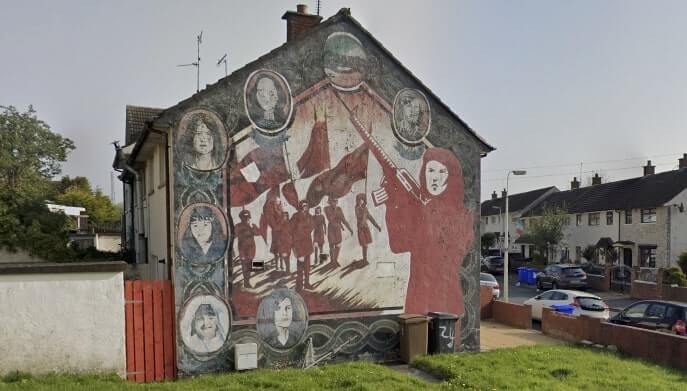 This mural on Ballymurphy Road depicts a woman proudly carrying a gun while surrounded by portraits of several other women who have died for the Republican cause.

With a gun-wielding soldier standing in front of the Dublin General Post Office, a large memorial to the famous 1916 Easter Rising can be seen on Beechmount Avenue. 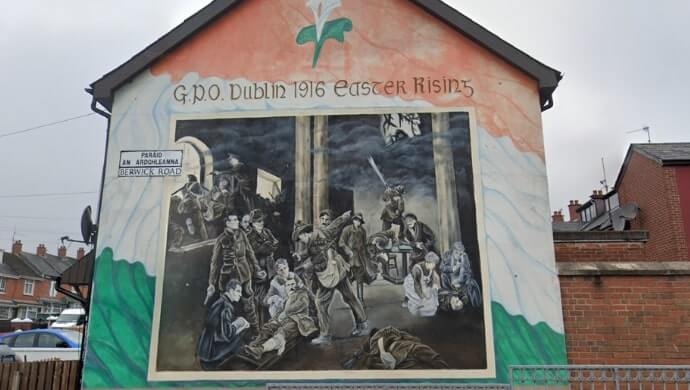 Continuing this theme over on Berwick Road, The Dublin Rising shows a dramatic black and white scene from inside the General Post Office with the Irish flag draped behind. 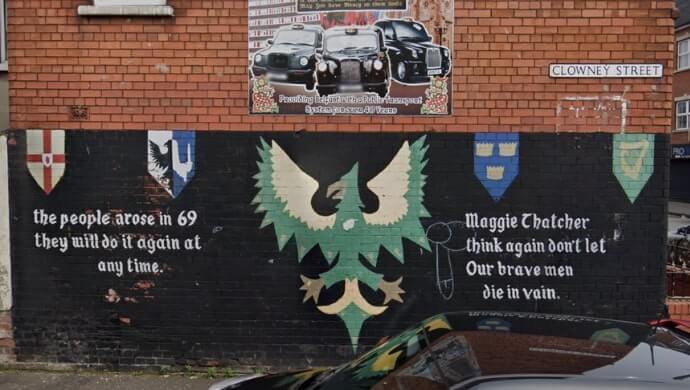 Dating back to 1989, Clowney Phoenix is one of the older Republican murals and depicts a rising phoenix surrounded by the emblems of the four ancient provinces of Ireland – Ulster, Connacht, Munster and Leinster. 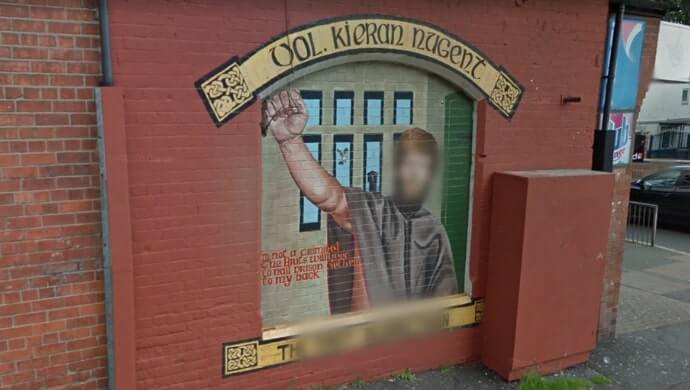 One of the smaller murals but no less powerful, this one on Rockville Street shows IRA volunteer Kieran Nugent who was only a teenager when he was jailed in the 1970’s. He became famous for being the IRA’s first ‘blanketman’. 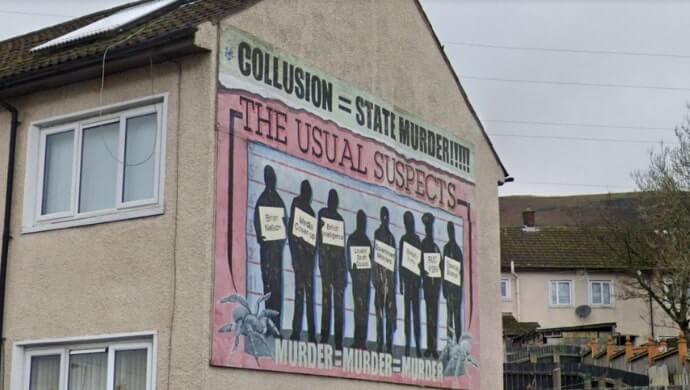 One of Belfast’s more bluntly political murals, Usual Suspects depicts a typical police line-up with each suspect holding a placard and accused of state collusion and murder in block capital letters.

The second section of our guide tackles the various Loyalist Murals in Belfast. Just keep in mind that this is just a selection of the different murals in place today.

If at this point you’re wondering why Northern Ireland is park of the Uk, it’s worth taking some time to read our guide on the separation of Ireland. 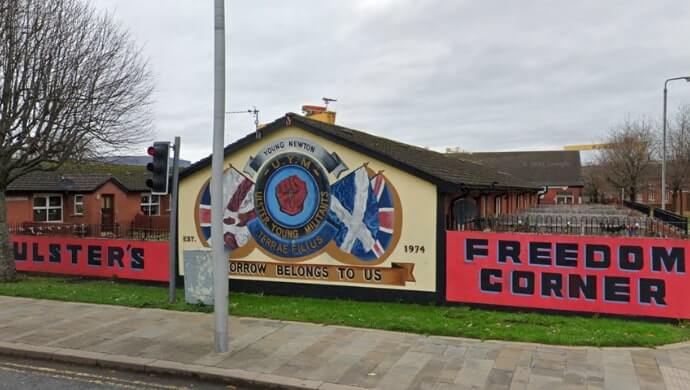 Residing at the end of a long line of murals on Newtownards Road in East Belfast, Ulster Freedom Corner shows the red hand of Ulster backed by various flags announcing ‘tomorrow belongs to us’. 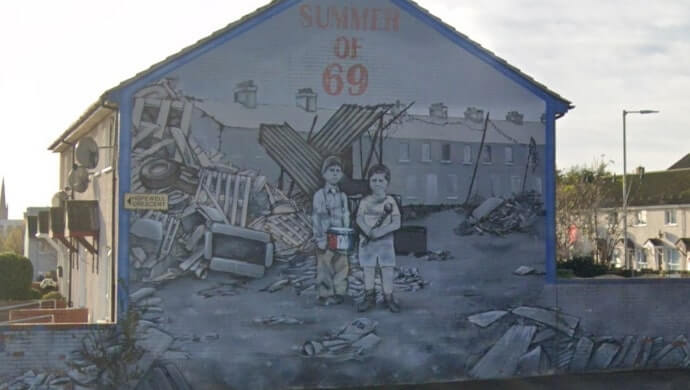 Often described as the year The Troubles began, Summer of 69 (with its ironic Bryan Adams reference in the title) depicts two children no longer able to play outside due to the violence surrounding them. 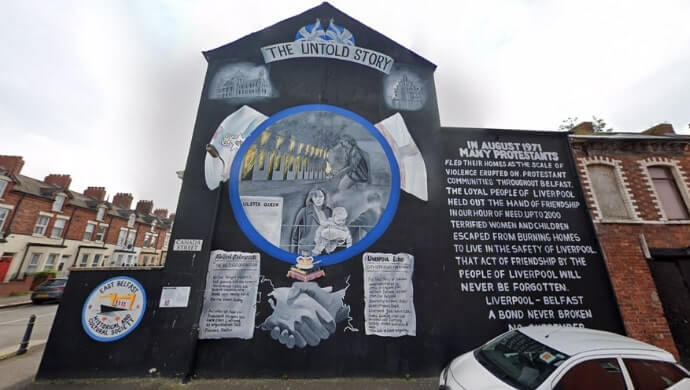 Located on Canada Street, Untold Story recounts an incident from August 1971 where Protestants fled their homes as the IRA launched an attack on Protestant communities throughout Belfast. 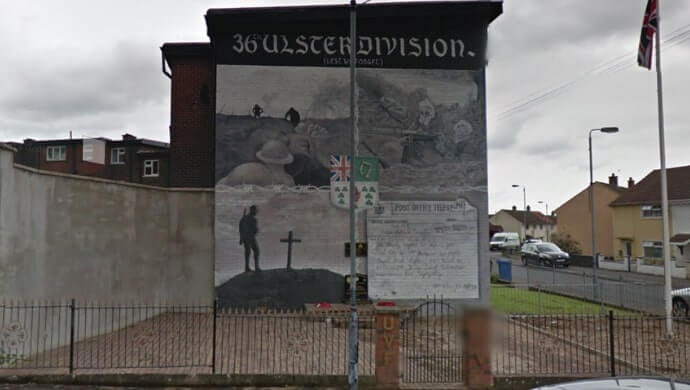 Using classic imagery from the Western Front, Lest We Forget pays tribute to the 36th Ulster Division who fought in World War One. 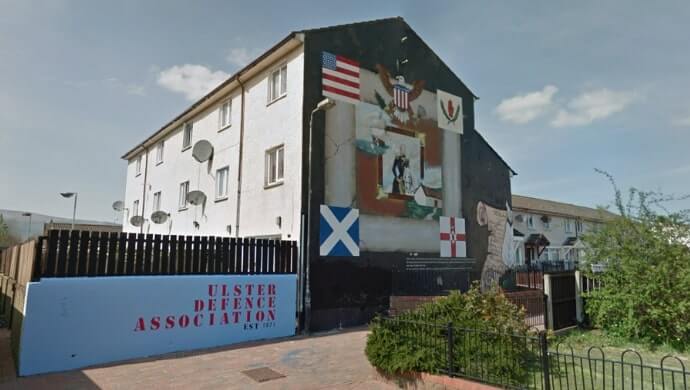 Located on Boundary Walk just off The Shankhill Road, UDA Boundary is a simple tribute to the Ulster Defence Association. 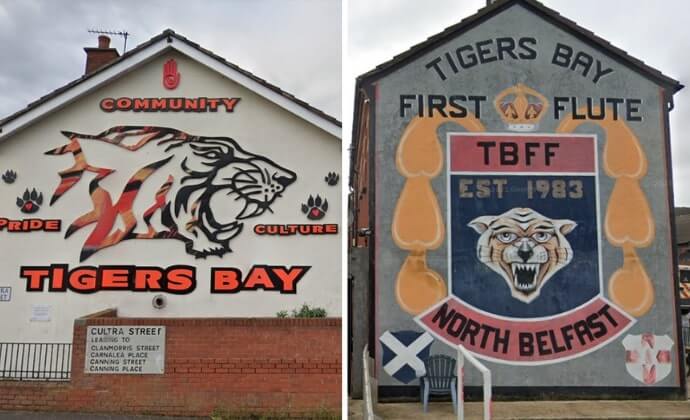 Anyone with a cursory knowledge of Loyalist culture in Northern Ireland will know how important their marching bands are. Tigers Bay pays tribute to the Tigers Bay First Flute band. 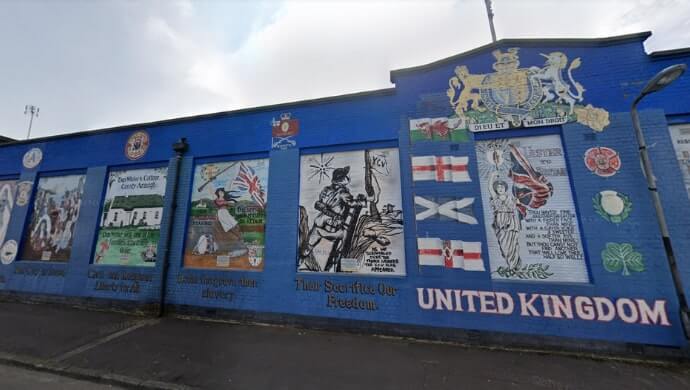 There’s some detail in this one! Ulster History is an impressive recounting of Ulster’s history from the Loyalist point of view that stretches a good 40ft or so in length. 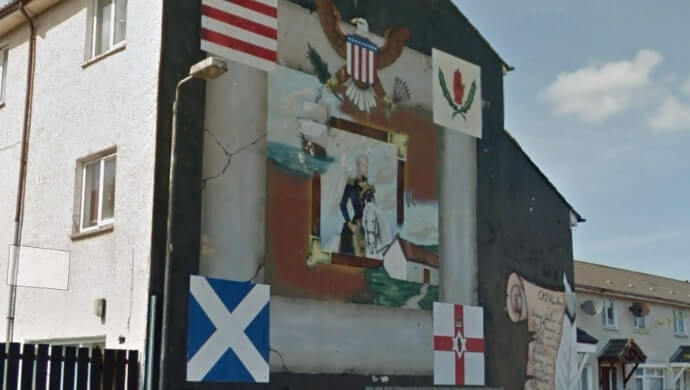 A tribute to Andrew Jackson, the 7th President of the United States. Jackson was the son of Presbyterian Scots-Irish colonists who had emigrated from Ulster two years before his birth. 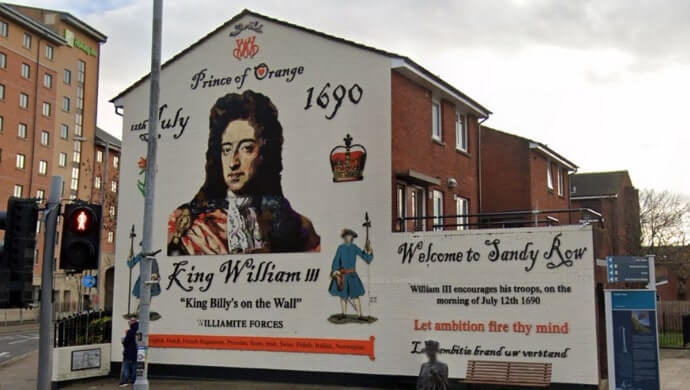 Also known as William of Orange or ‘King Billy’ in Northern Ireland, King William was a protestant ruler who waged war against Catholic rulers in the late 17th century so it’s no surprise he has his own dedicated mural. 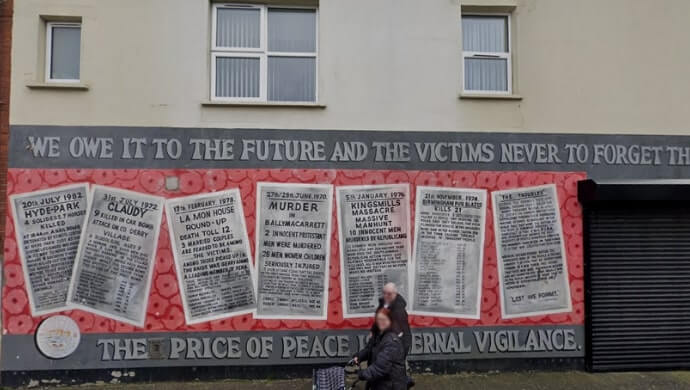 Located on Derwent St, this mural depicts a row of 7 newspaper clippings discussing protestant victims of The Troubles.

If you fancy taking a guided tour of the murals in Belfast rather than going it alone, this tour (affiliate link) has 250+ great reviews.

The tour is given by a guide that’s lived in Belfast during The Troubles, making the experience both and informative and and enlightening one.

You guide will off deep insights into the meanings of the various Belfast murals and the trip takes in everything from the Belfast Peace Wall to the lively streets of Belfast City.

A map of the different murals in Belfast

Above, you’ll find a handy Google Map with the location of the murals in Belfast mentioned in the guide above. Now, a quick disclaimer.

Again, as mentioned above, we’d recommend taking one of the Belfast mural tours rather than heading off solo to look for them (mainly as there are some areas of Belfast to avoid, especially late at night!).

We’ve had a lot of questions over the years asking about everything from where to see the different Belfast murals to why they’re present in the city.

Where are the murals in Belfast?

You’ll find the Belfast murals scattered right the way across the city. If you scroll back up to the Google Map above you’ll find the locations of the ones in this guide.

Why are the Belfast murals there?

The murals in Belfast display important aspects each community’s culture and history. In a nutshell, the Belfast murals are a visual way of showing pride and communicating messages that often reflect each community’s values.

What Belfast murals tour is worth doing?

The Belfast murals tour mentioned above is worth checking out. The reviews are excellent and the guide lived in the city during The Troubles.