If you fancy seeking out some Belfast street art, you’ve landed in the right place (note: if you’re looking for murals, which are very different, see our Belfast murals guide!).

While some cities are famous for a prominent landmark like a museum or a cathedral, nothing is as immediately visual or visceral as a piece of awe-inspiring street art.

And in a city as famous for its visuals as Belfast, it’s no surprise there’s a host of colourful street art for you to feast your eyes on!

In the guide below, you’ll find a mix of the best street art Belfast has to offer. So, dive on in!

Some quick need-to-knows about street art in Belfast 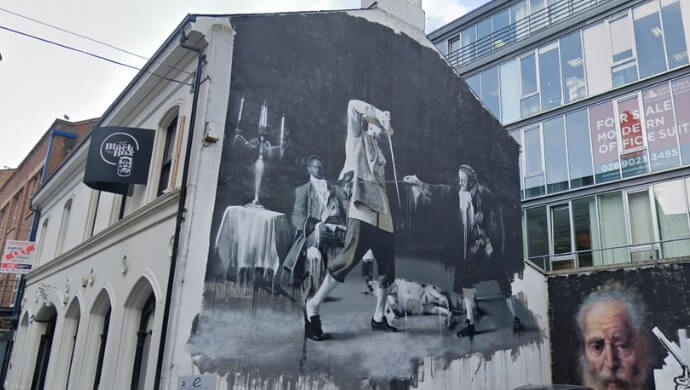 Seeing the different street art Belfast has to offer is relatively easy, once you know where to look. However, there are a few need-to-knows:

1. We’re not talking about murals

First though, a quick distinction needs to be made! Street art is not the same as a mural (very important in the context of Belfast). Murals typically form part of the architecture they’re painted on and the artist will have been commissioned and paid (check out our murals guide for much more on this).

Belfast street art, however, is a far more transient medium and which is why in a vibrant street art city like Belfast you need to visit them while you can! Work can be either abstract or making a statement. Either way, there’s no guarantee it’ll be around for long.

That transience, however, means you’ll see a slightly different Belfast each time you visit. The prospect of an ever-changing canvas is seductive and should be embraced! But for now, read on to find out more about (at the time of writing, at least) some of Belfast’s coolest street art.

4. A nice alternative to galleries

There’s an almost endless number of art galleries in Belfast, but the city’s street art is world’s apart. Rambling from piece to piece is one of the more unique things to do in Belfast, and you’ll see parts of the city you never knew existed as you stroll.

Our favourite Belfast Street Art (and where to find it) 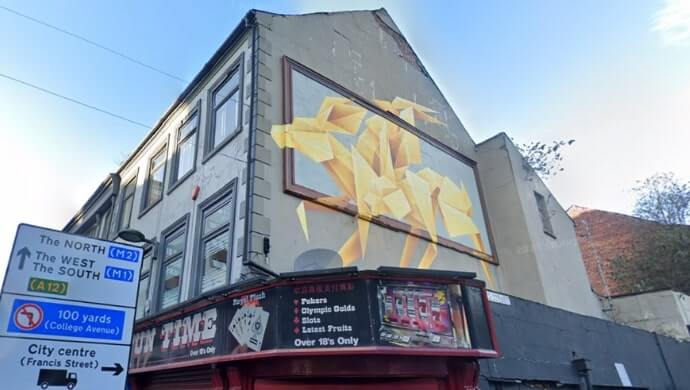 Below, you’ll find a mix of some of the better known street art Belfast has to offer along with several often-missed pieces that are tucked away off the tourist trails.

There’s everything from the magnificent ‘Blurry Eyed’ and the mesmerizing ‘Whitewashing a Rembrandt’ to ‘Keep Her Lit’ and much more. 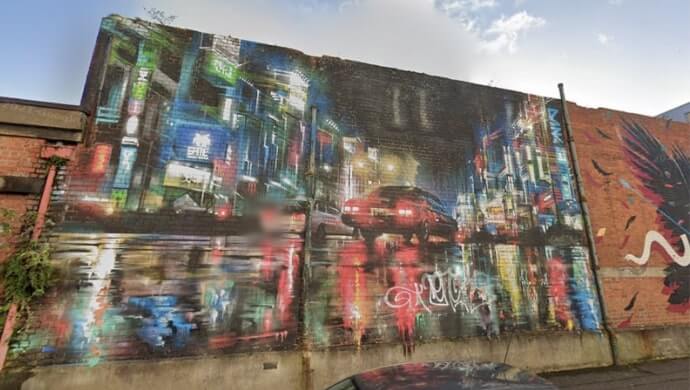 Depicting a rainy street scene lit up in a flurry of neon signs, Blurry Eyed by Dan Kitchener is a colourful addition to Talbot Street in the city centre’s Cathedral Quarter. 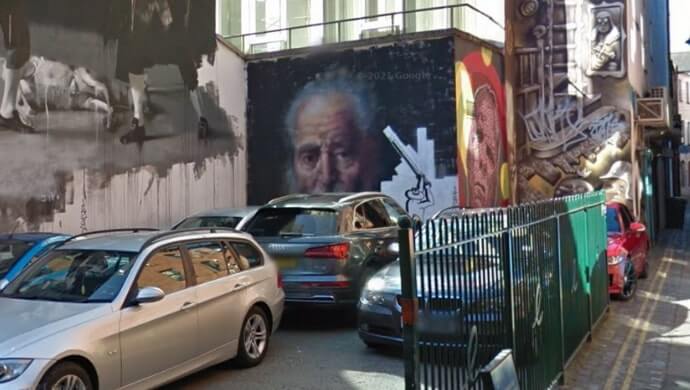 Just around the corner in a small car park on Hill Street lies Whitewashing a Rembrandt. Created by Lisbon-based artist PANG, it shows a classical portrait being whitewashed by a painter in the corner. 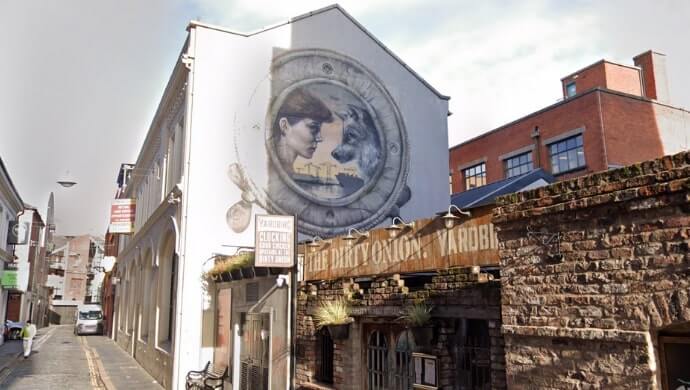 Staying on Hill Street, Still Waters by Manchester-based Nomad Clan explores Belfast’s industrial past and present by showing a modern young woman face-to-face with a wolf. 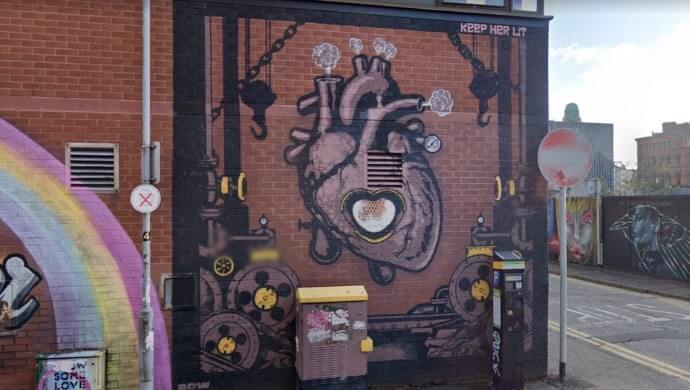 There’s a steampunk element to Keep Her Lit on Union Street. Created by Dublin-based artist ADW, it shows a human heart fitted with a pressure clock set among pipes and chains. 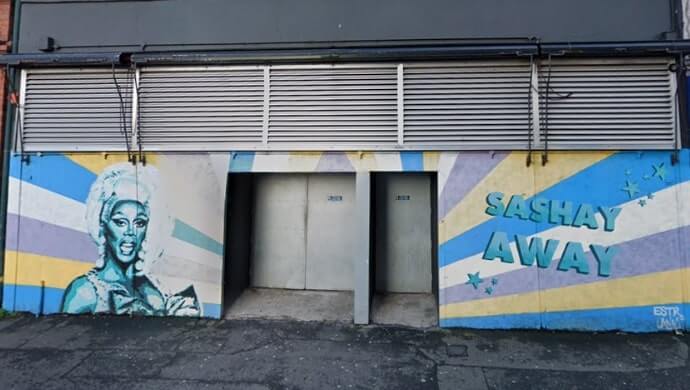 Created by Emmalene Blake and Lanni Powder, this colourful piece on Little Donegal Street shows RuPaul along one of his favourite catchphrases from his popular Drag Race TV show. 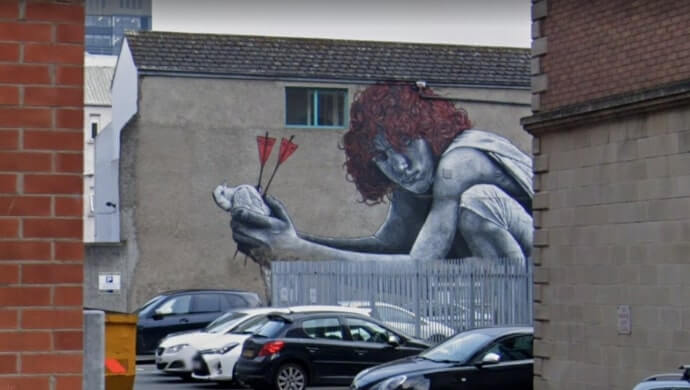 Located in a car park on Talbot Street, The Son of Protogoras by MTO touches on Belfast’s past conflicts and depicts a boy clutching a dove that has been struck by two arrows. 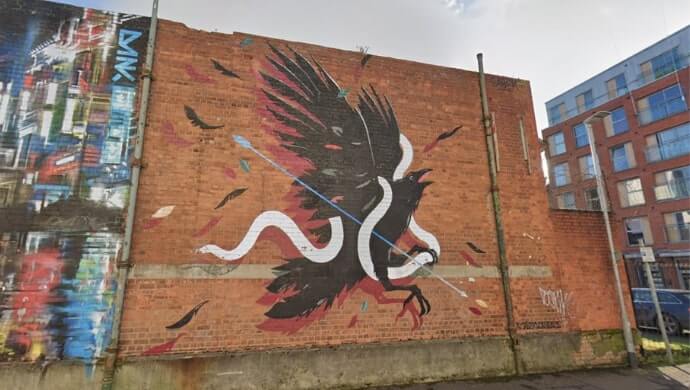 Vividly depicting a fight between a crow and a snake while an arrow goes flying past, Conflict by Spanish artist Sabek can be seen on Talbot Street. 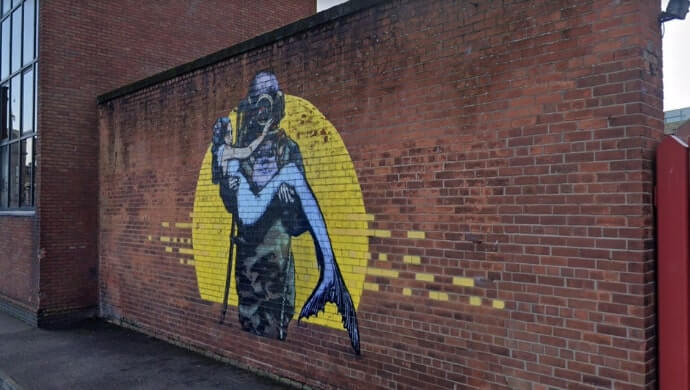 Another great piece from ADW can be found on Dunbar Street. Deep Love shows a diver in an antique diving suit carrying a mermaid in his arms. 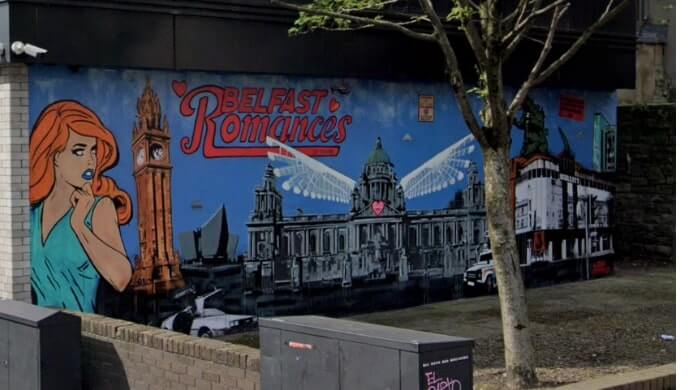 A cool pop art addition to the city’s street art scene, Belfast Romances by Leo Boyd is a colourful piece representing the artist’s favourite things about Belfast, with the City Hall at its heart. 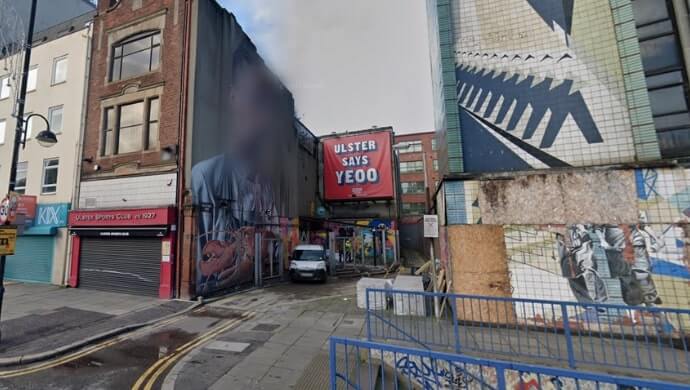 Located on High Street and three stories high, The Chef by Australian artist Smug is an exceptionally well-crafted image of a young chef holding a lobster.

A sublime black and white piece on Hill Street by Irish artist Conor Harrington, The Duel of Belfast depicts two dueling men and hints at the decadence of the colonial west.

A striking piece on Pottingers Entry by Manchester-based Nomad Clan, Pelicans shows the pelicans from the Pottinger family crest while the Asian flowers represent trading routes from Belfast’s industrial past.

As was the case in our Belfast murals guide, we’re going to recommend a guided tour of the various street art Belfast has to offer.

One of the reasons for this is that you’ll get a better understanding of each piece of art, but also because street art can also be tricky to find at times, as it comes and goes.

Taking place every Sunday at noon, Seedhead Arts’ walking tour is a great way to discover more about the awesome artworks dotted around Belfast. Now running for three years and lasting around two hours, you’ll learn about the city’s legacy of conflict and how artists from all over the world have come together to interpret Belfast’s unique character.

What Belfast street art have we missed?

I’m sure we’ve unintentionally missed out on some other great street art Belfast has to offer.

Please shout away in the comments with the names/locations of any ones you know of and love and we’ll check them out asap.

FAQs about the best street art Belfast has in 2021

We’ve had a lot of questions over the years asking about everything from what’s the newest street art in Belfast to which works should be avoided as they’re in areas of Belfast to avoid.

What is the best street art Belfast has to offer?

Our favourites are ‘Whitewashing a Rembrandt’ and the brilliant ‘Golden Hares of Rathlin Island’.

What Belfast street art is the most impressive?