The magnificent St Anne’s Cathedral (aka Belfast Cathedral) is one of the more popular places to visit in Belfast.

The focal point to the Belfast Cathedral Quarter, St Anne’s Cathedral is unusual because it serves two separate dioceses (an ecclesiastical district under the jurisdiction of a bishop) and therefore has two bishop’s seats.

Steeped in history, the cathedral is popular both as a place of worship and with tourists. Below, you’ll find info on everything from opening hours to its many unique features. 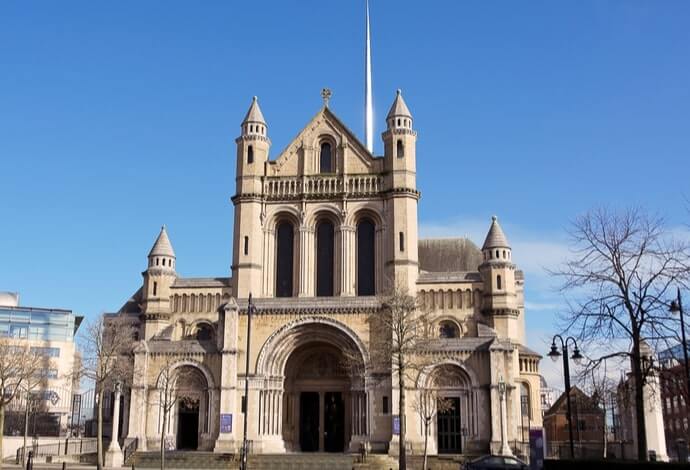 Although a visit to Belfast Cathedral is fairly straightforward, there are a few need-to-knows that’ll make your visit that bit more enjoyable.

Sunday worship takes place at 11am (services are also streamed live every Sunday on the cathedral’s Facebook page). The opening hours otherwise are 11am to 6pm, Monday to Saturday, and 1pm to 6pm Sundays.

4. Home to plenty of interesting features

St Anne’s Cathedral, built in the Romanesque style characterised by its semi-circular arches, attracts its fair share of visitors thanks to its wealth of interesting features, such as the Spire of Hope, the Titanic Pall and the Tomb of Lord Carson. More on this below. 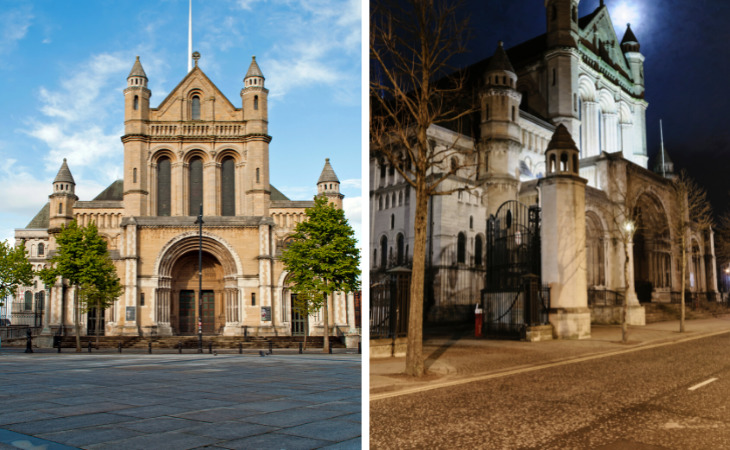 Like many cathedrals, Belfast Cathedral is built on the site of a former church after a plan was launched in 1895 to build a cathedral for the city.

Both architects appointed were Belfast men, Thomas Drew and WH Lynn, and the building’s foundation stone was laid in 1899.

The cathedral does not have a heavy central tower because of the soft clay ground underneath, and wooden piles 50 feet long were needed to support the walls and pillars of the nave.

This, the first part of Belfast Cathedral to be constructed was consecrated in 1904 and the cruciform church was a work in progress for some 80 years, its sections completed bit by bit, and the final stainless-steel Spire of Hope laid down in 2007.

During the Second World War, the cathedral almost fell victim to a German bomb, which caused much damage to the surrounding properties. The Troubles and inflation also caused delays in its construction and issues with the financing of the building.

One of the reasons that St Anne’s Cathedral is one of the more popular places to visit in Belfast is due to it’s many unique features.

1. The Spire Of Hope

Installed on top of the cathedral in 2007, the Spire of Hope was the result of an unusual solution to a tricky problem.

As the ground underneath the cathedral is a mix of soft grey mud, silt and sand otherwise known as Belfast ‘sleech’, no traditional spire or bell tower could sit atop of it as they would result in the further subsidence of the building.

The Cathedral held a competition asking for ideas from architects in Ireland of what could be done to create a lightweight spire. The winning idea came from Colin Conn and Robert Jamison of Box Architects who proposed a spire that would rise some 250 metres above ground level and be illuminated at night. It was named the Spire of Hope to reflect the many signs of progress going on all over the city at the time.

More than 1,500 lives were lost when the Titanic ocean liner sank in 1912. The ship was built in Belfast, so it is fitting that St Anne’s Cathedral honors all who were lost in that great tragedy.

Made from Merino felt and backed with Irish linen, the Titanic Pall is dyed indigo blue to evoke the midnight sea. It was made by textile artists Helen O’Hare and Wilma Fitzpatrick and was dedicated to the memory of those who died on the 100th anniversary of the tragedy.

It takes the form of a large central cross comprised of lots of tiny crosses individually stitched, and hundreds more crosses that fall away symbolising those lives lost in the ocean. The theme was inspired by the composer Philip Hammond, whose Requiem for the Lost souls of the Titanic was performed for the first time in St Anne’s Cathedral.

Most cathedrals have more than one tomb, which makes St Anne’s unusual as it has only one – that of Lord Carson. The Irish unionist, politician, barrister and judge was born in Dublin in 1854 and as an MP at Westminster, he led the anti Home Rule movement and came to dominate the cause in Ulster.

Because he was seen as so important to the unionist cause, he was one of the few non-Royals to receive a British state funeral, which took place at the cathedral in 1935 after a special Act of Parliament allowed for this.

The bronze-railed tomb is marked by a massive granite stone from the Mourne Mountains and at the funeral service, earth from each of the six counties of Ulster was strewn on the coffin.

The Regimental Chapel was consecrated on the anniversary of D-Day in 1981, and it contains many historical artefacts such as the Books of Remembrance, the font, lectern, and chairs that were presented by families to commemorate the soldiers who lost their lives.

There is also a Book of Prayers written on rice-paper by a prisoner of war in Korea. It was presented to Captain James Majury by the prisoners who found comfort in the services he held for them during their captivity in 1952-53.

The Baptistery has a mosiac roof – an example of art adapted to the Romanesque architecture style. The roof is made of 150,000 pieces of glass that represent creation and symbolise earth, fire and water. The font is composed of marble taken from all over Ireland.

While St Anne’s Cathedral narrowly escaped bombing during the 1941 Belfast Blitz, Coventry Cathedral was reduced to rubble by German bombers.

At the time, a priest walked through the ruins the following day and found large, medieval carpenters’ nails that fell down with the roof. He fashioned them into the shape of a cross—the first Cross of Nails that came to stand for suffering and the hope of survival.

More than 100 more crosses were made afterwards from those nails taken from the ruins, and one was accepted for St Anne’s in 1958.

Things to do near Saint Anne’s Cathedral Belfast

One of the beauties of a visit to St Anne’s Cathedral is that it’s a short spin away from plenty of other things to do in Belfast.

Below, you’ll find a handful of things to see and do a stone’s throw from Belfast Cathedral (plus places to eat and where to grab a post-adventure pint!). 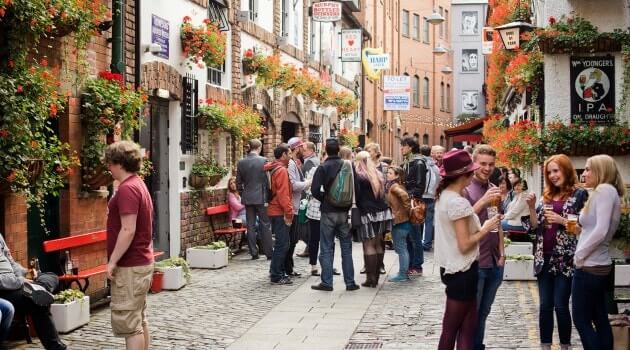 The Cathedral Quarter is home to some of the best restaurants in Belfast. The SQ Bar and Grill is part of the Ramada Hotel and has an outdoor terrace overlooking St Anne’s Square, while Top Blade is a steakhouse that also offers cocktails and in 21 Social you can eat, drink and dance. It’s also home to some of the liveliest pubs with live music in Belfast.

No-one can come to Belfast and not visit the Titanic Belfast, which tells the story of the doomed liner from its conception, construction and launch through to its sinking. When you visit, keep an eye out for the iconic Harland & Wolff cranes – you can’t miss them! 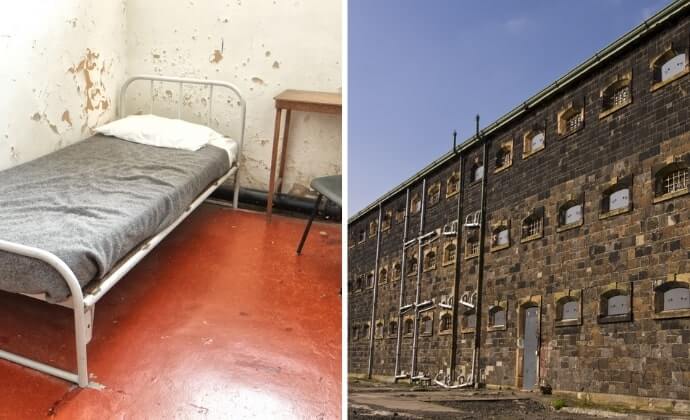 This 5-star visitor attraction offers tours of the infamous prison. There is also a bar and a restaurant, and you can even get married there if you fancy a venue with a difference! See our Crumlin Road Gaol guide for more.

FAQs about visiting the Belfast Cathedral

We’ve had a lot of questions over the years asking about everything from is St Anne’s Cathedral in Belfast worth a visit (it is!) and what to see while you’re there.

Is St Anne’s Cathedral worth visiting (if so, why)?

Yes! St Anne’s Cathedral in Belfast is home to a wealth of history and the building boasts some very unique and unusual artefacts and features.

What is there to see at St Anne’s Cathedral?

There’s The Spire Of Hope, The Titanic Pall, The Regimental Chapel, The Baptistry and The Coventry Cross Of Nails.

I was christened in st Anne’s cathredal in 1942 , is there a registra of the people who was chtistenedthere p,ease