The iconic Claddagh Ring is proudly worn on millions of fingers, Irish and non-Irish, right the way around the world.

It’s an Irish symbol of love. But, as you’ll discover shortly, the wearer doesn’t need to be in a relationship (or in love, for that matter).

In the guide below, you’ll discover everything from the meaning of the Claddagh Ring to its very interesting history that involves heartbreak, pirates and slavery.

There’s also a section that clearly explains how to wear the Claddagh Ring, depending on whether you’re engaged, single, in a relationship or married.

Related read: Why the Claddagh isn’t a Celtic Symbol for love and why sneaky online businesses want you to believe that it is!

The History of the Claddagh Ring 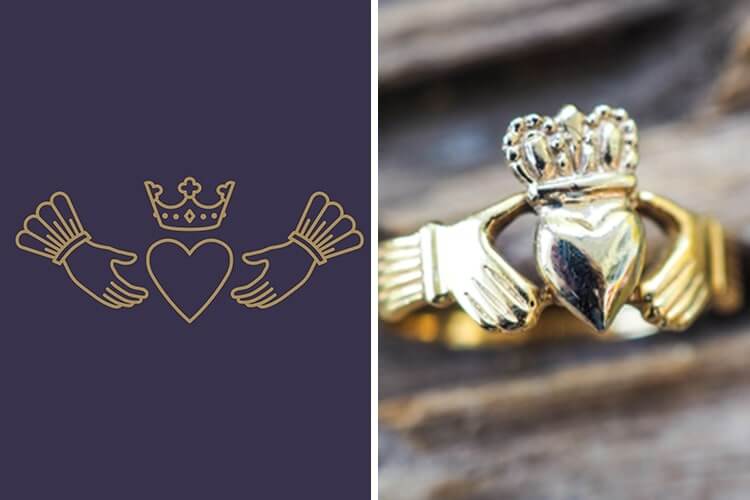 In Ireland, you’ll find that many tales, legends, and, at times, chunks of history, tend to have many a different version. This tends to happen when a piece of information is passed down through generations.

The story of the Claddagh ring is no different. I’ve heard a number of different accounts of its history, and while each is similar, there are subtle differences.

I’ll tell you the history of the Claddagh as I was told as a child. It all begins with a man from Galway by the name of Richard Joyce.

Richard Joyce and the Claddagh Ring

According to legend, shortly before Joyce was due to be married, he was captured by pirates and sold to a rich goldsmith in Algeria.

It’s said that the goldsmith sensed Joyce’s potential as a master craftsman, and he decided to take him on as an apprentice.

Now, this wasn’t out of the good of his heart – don’t forget, the Algerian had bought Joyce as a slave. It’s likely that he would have trained him up and worked him to the bone.

It was here, in a workshop in Algeria, that Joyce is said to have designed the first Claddagh ring (this has been disputed – info below!). Inspired by his love for his bride-to-be back in Galway.

The return to Galway

In 1689, William III was appointed King of England. Shortly after being crowned, he made a request to the Algerians – he wanted all of his subjects that were enslaved in Algeria released.

If you’re thinking, ‘Eh, how is a lad from Galway a subject of the King of England’, you’re probably not alone.

Ireland was under British rule during this period (further reading here, if you fancy diving more into it). Anyway, back to the story of the Claddagh Ring and the man himself, Richard Joyce.

The return to Ireland and the first Claddagh Ring

I’ve heard tell that Joyce was so good at his craft that his Algerian master didn’t want him to leave for Ireland, despite instructions from the king.

Knowing that he could no longer enslave him, the Algerian offered Joyce half of his Goldsmith business along with his daughter’s hand in marriage, as an incentive for staying.

Joyce refused his masters offer and embarked on the journey home to Galway. When he arrived back to Ireland, he found his long-suffering bride-to-be waiting for him.

Here’s where things get a bit grey – in some stories, it’s said that Joyce designed the original Claddagh Ring while in captivity and that he presented it to his fiance when he arrived home.

Others say that he designed the ring upon his arrival back in Galway. And others dispute that Joyce was the original creator entirely.

Arguments against the above story of the Claddagh ring

I mentioned above that the story of the Claddagh ring tends to change a bit, depending on who you speak to or where you read it.

Some people debate that Joyce wasn’t the inventor of the design, stating that his version of the Claddagh Ring was just the most popular at the time.

You’ll often hear mention of Dominick Martin, a goldsmith that was already in operation in Galway when all of this was going on.

Some people believe that Martin was the original designer and that Joyce’s design was simply more popular.

The Meaning of a Claddagh Ring

We get about 4 emails and/or comments every single week, without fail, from people asking something along the lines of, ‘What is the meaning of a Claddagh Ring’.

The Claddagh is a traditional Irish ring that’s packed with symbolism. Each section of the ring represents something different:

While the rings are popular in Ireland, they’re far more popular among those with Irish ancestors and among those visiting Ireland, who often see them as the perfect souvenir.

How to Wear a Claddagh Ring 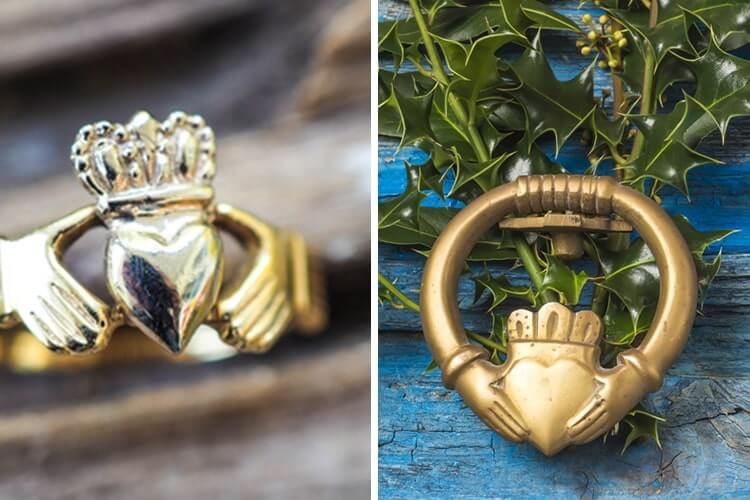 Although it’s is a symbol of love, the meaning of a Claddagh ring depends entirely upon how it’s worn.

There are four different ways of wearing a Claddagh:

There’s a misconception that the Claddagh ring is only for people in love/in long term relationships. This isn’t true.

The ring is just as appropriate for those of you happily single or happily/unhappily in search of a partner.

If you’re single, you can wear the ring on your right hand with the point of the plump heart facing towards your fingertips.

Meaning of the Claddagh ring #2: For those in a relationship

OK, so, you’re in a relationship and you’ve just bought your first Claddagh ring… and now you’re worried.

Worried that you’ll pop it onto your finger the wrong way and that you’ll have some drunken fool annoying you in a bar.

Don’t fret – first, the chances of some drunken fool being able to see the ring are probably next to impossible.

Second, once you place it on a finger on your right hand with the heart pointing up at your wrist, it’ll let people know that you’re in a relationship.

Now, keep in mind that a lot of people won’t know the meaning of the Claddagh ring… so, you’ll probably still have drunken fools annoying you!

How to wear a Claddagh ring #3: For those happily engaged

Yes, there’s a crazy number of ways of wearing the Claddagh ring, but that’s what gives it the appeal for a lot of people.

OK, so, you’re engaged to be married – fair play to you! Make sure to read our guide to Irish wedding blessings, when you get the chance!

If you wear the ring on your left hand with the little point of the heart facing towards your fingers, it symbolises that you’re engaged.

And finally #4 – for married folk

Annnd we’re finally onto the last way or wearing the Irish Claddagh Ring. If you’re married, pop the ring onto your left hand.

You’ll want to face the point of your heart to your wrist. That way, those familiar with the ways of the Claddagh will know you’re happily (hopefully!) married.

Have a question about the Claddagh? Let me know below!