They range from funny and sad to mad, mental and everything in between.

And, while you’ll see some that double up as Irish wedding toasts, others are packed with mischievous humour, making them better suited as an Irish cheers over drinks with friends.

Before using Irish drinking toasts, make sure to… 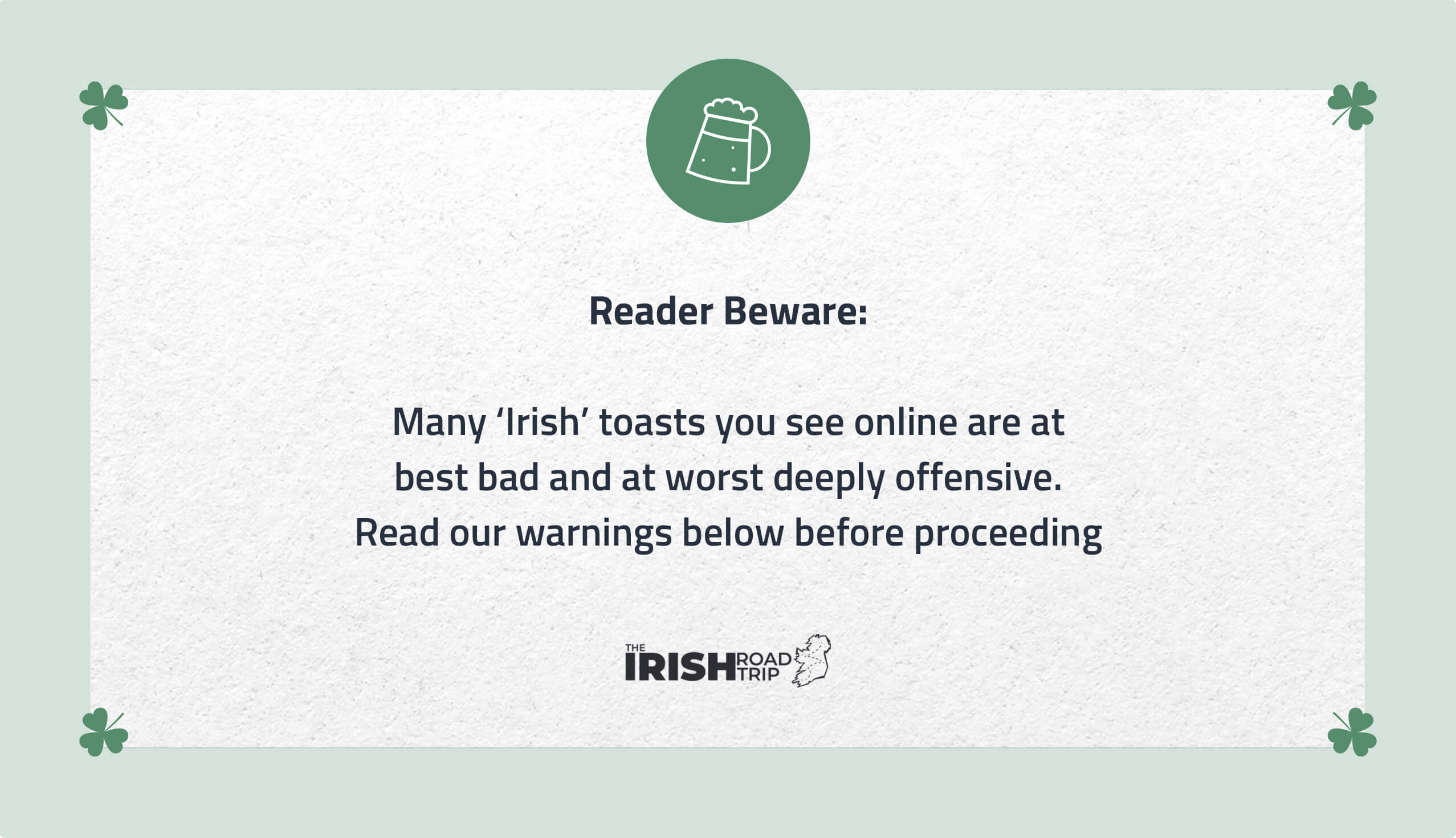 So, there’s a few need-to-knows about saying cheers in Irish to ensure that you don’t land yourself in hot water. Take 10 seconds to read the below points, first:

1. Know exactly what it is you’re saying

This may sound strange. However, we’ve heard plenty of stories of people that have used a bit of Irish slang during a toast, unaware of what it really meant. Always sense check Irish drinking toasts and, if in doubt, leave it out.

2. Know who you’re toasting with

This one sounds obvious, but make sure to know your audience. Many Irish drinking toasts are a bit edgy and some contain Irish insults, so it’s worth keeping them for when you’re with friends, rather than blurting one out during your best man’s speech.

3. Take what you see online with a pinch of salt

You’ll find hundreds of guides to delivering the ‘Perfect Irish cheers’ online. Many of these so-called Irish drinking toasts aren’t Irish at all. So, you could end up using one thinking that it’ll get a smile from your Irish in-laws but you’ll end up with an awkward silence.

Our favourite Irish cheers to accompany a drink 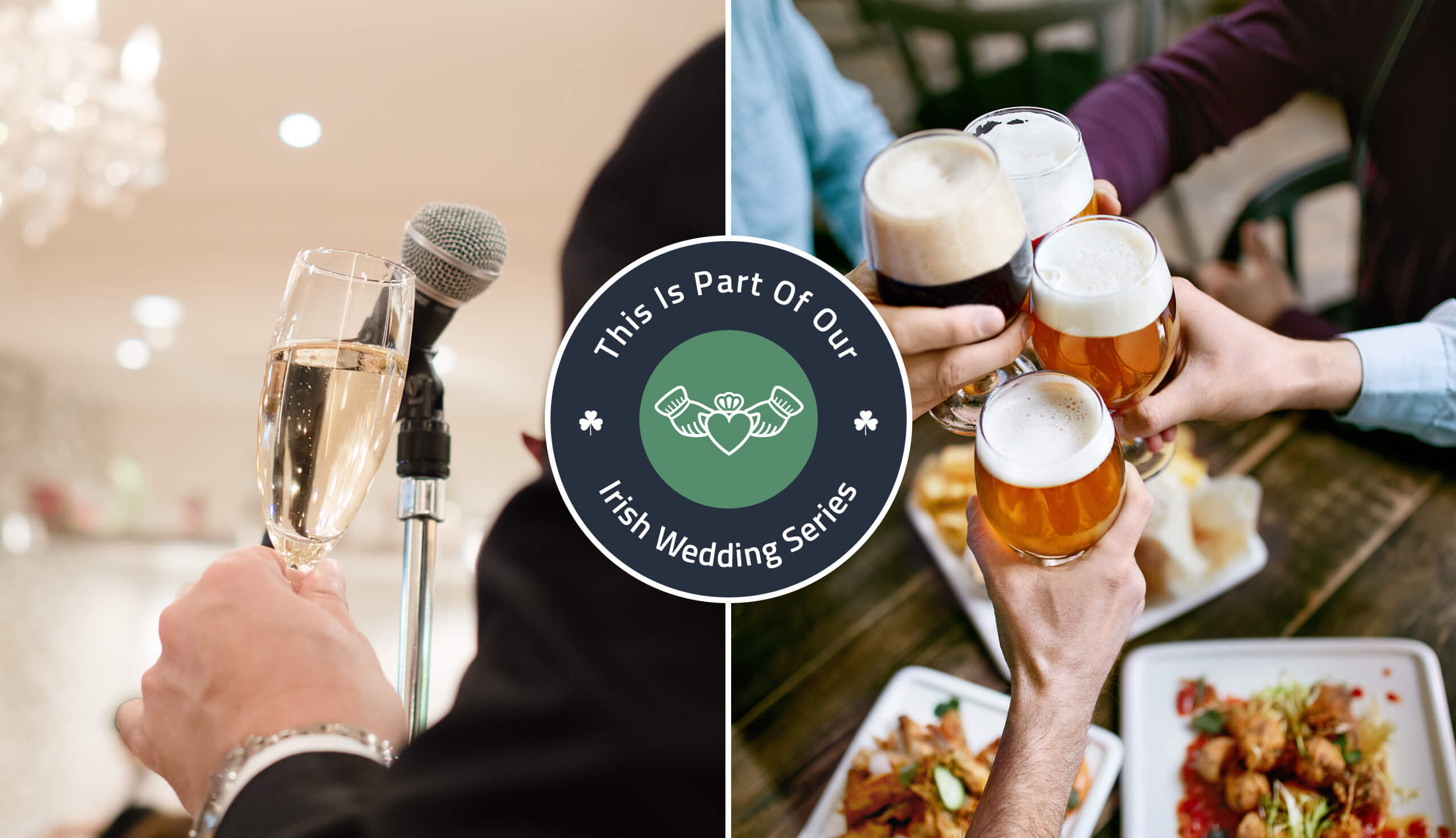 Right, now that we have the etiquette around Irish drinking toast out of the way, let’s get into the toasts themselves.

If you’re looking for some tunes to accompany your toast, see our guide to the best Irish drinking songs. 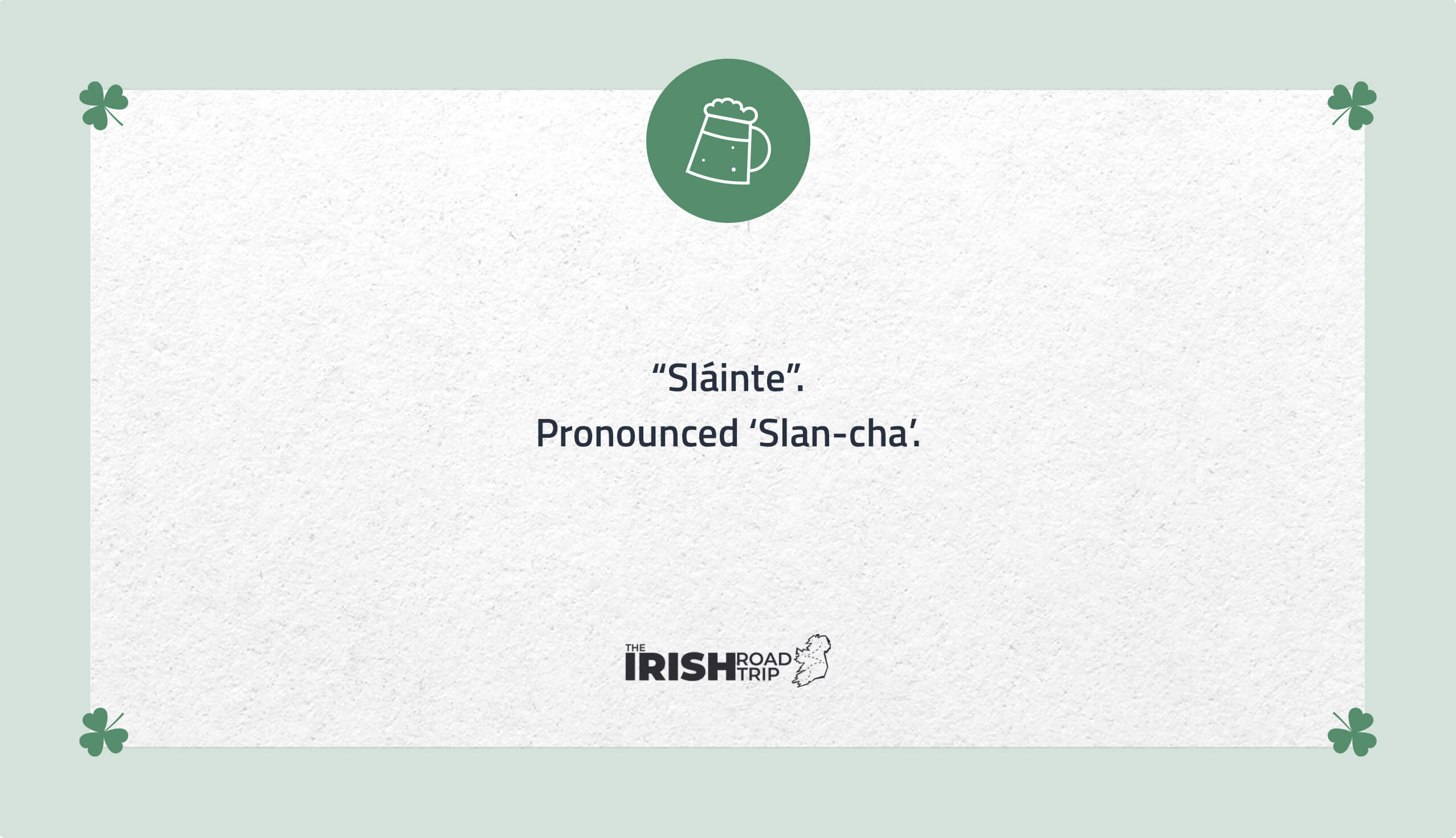 We’re going to kick things off with the most popular way of saying cheers in Ireland.

It’s one of the most common Irish drinking toasts, although you don’t really hear it used in Ireland too often. 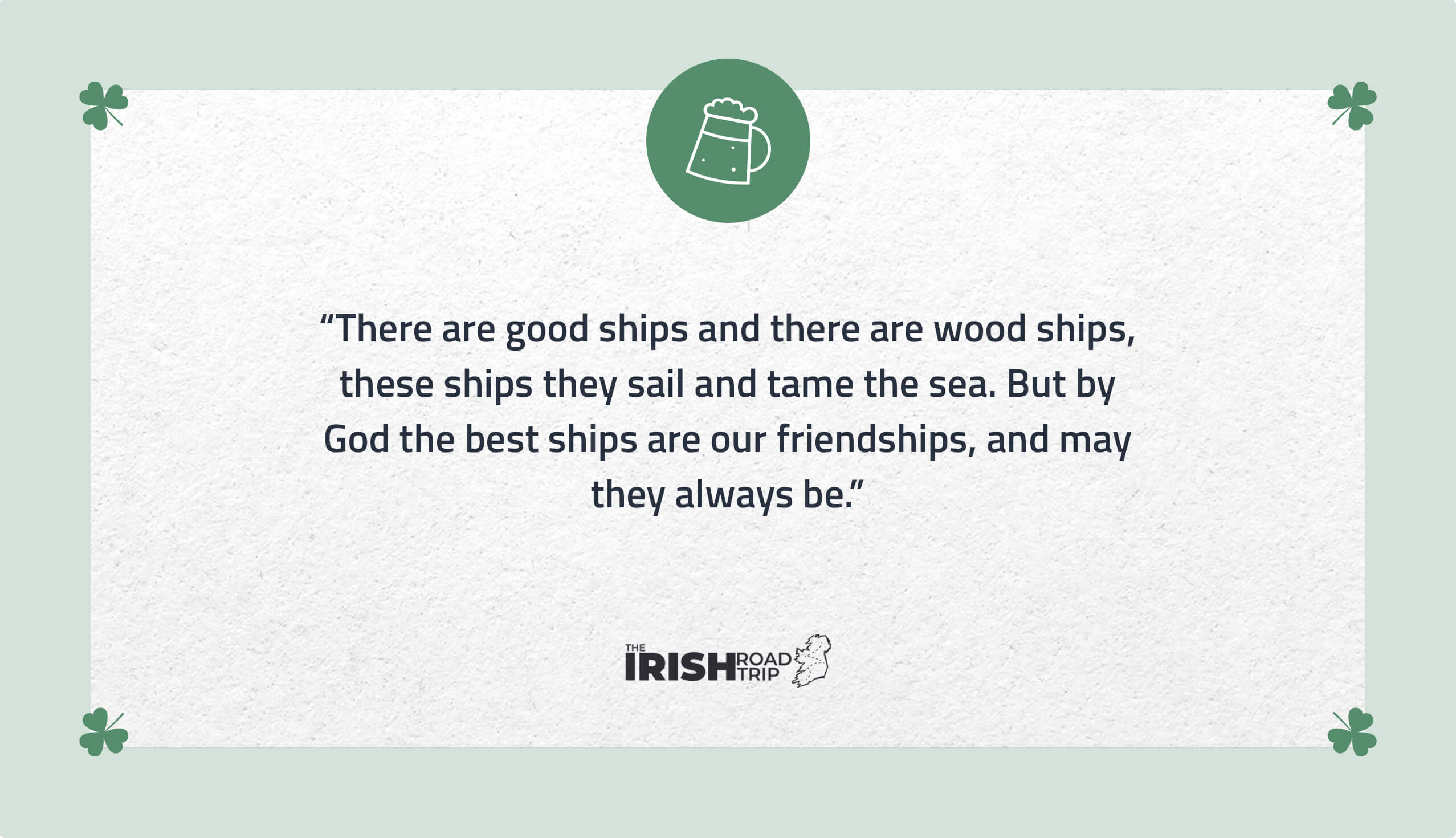 This is one of our favourite Irish drinking toasts as the rhyming pattern makes it easy to memorise.

You could easily use this as a toast around a table with friends or at a wedding or more formal occasion.

“There are good ships and there are wood ships, these ships they sail and tame the sea. But by God the best ships are our friendships, and may they always be.”

3. This rounds on… your man 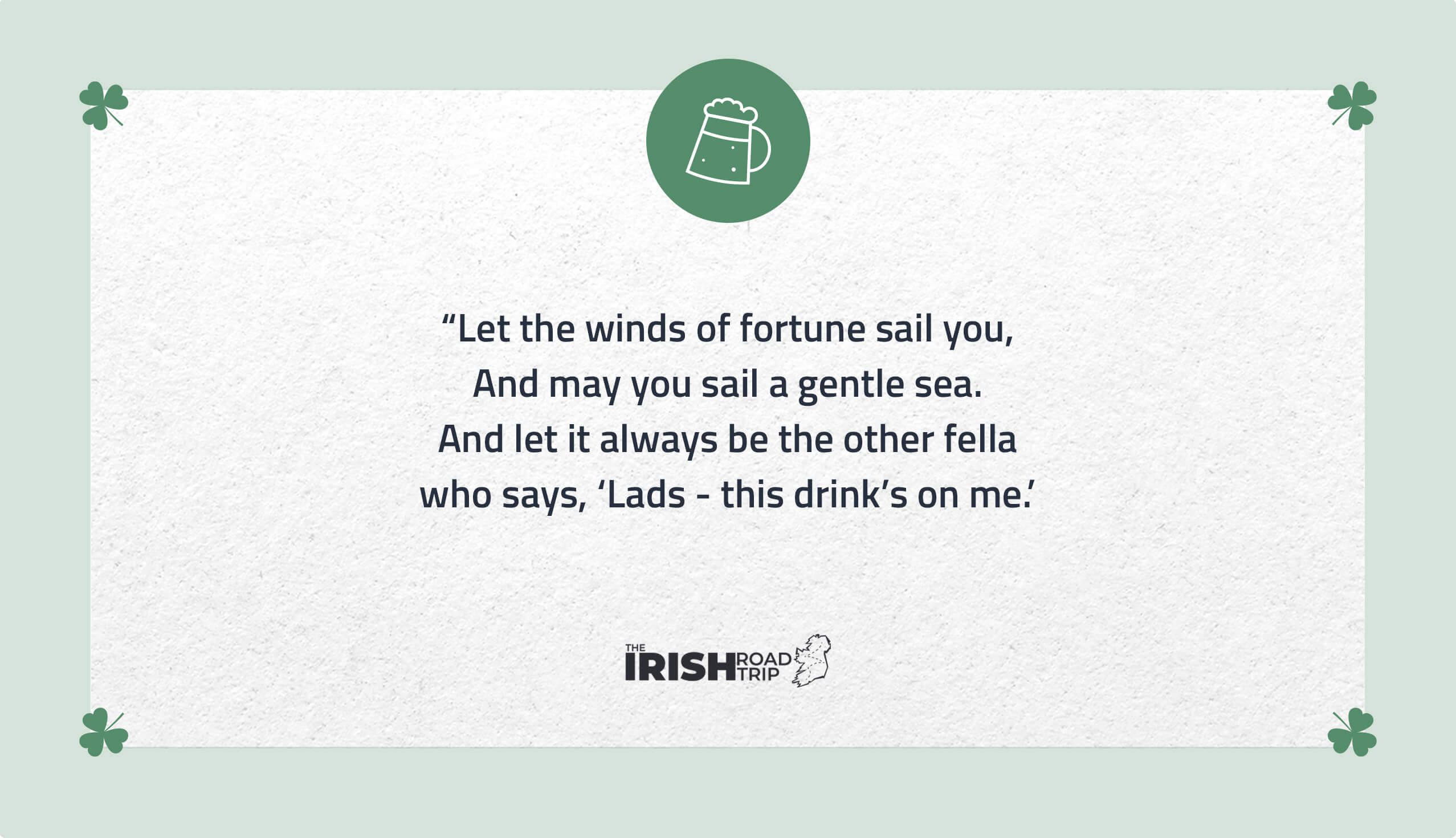 Many Irish jokes tend to ‘slag’ someone off (i.e. to make fun of, but in a gentle manner).

This one isn’t going to get you a load of laugh-out-louds, but it’ll raise a smile on the faces of those in attendance.

“Let the winds of fortune sail you, And may you sail a gentle sea. And let it always be the other fella who says, ‘Lads – this drink’s on me.’

4. A dash of humour and health 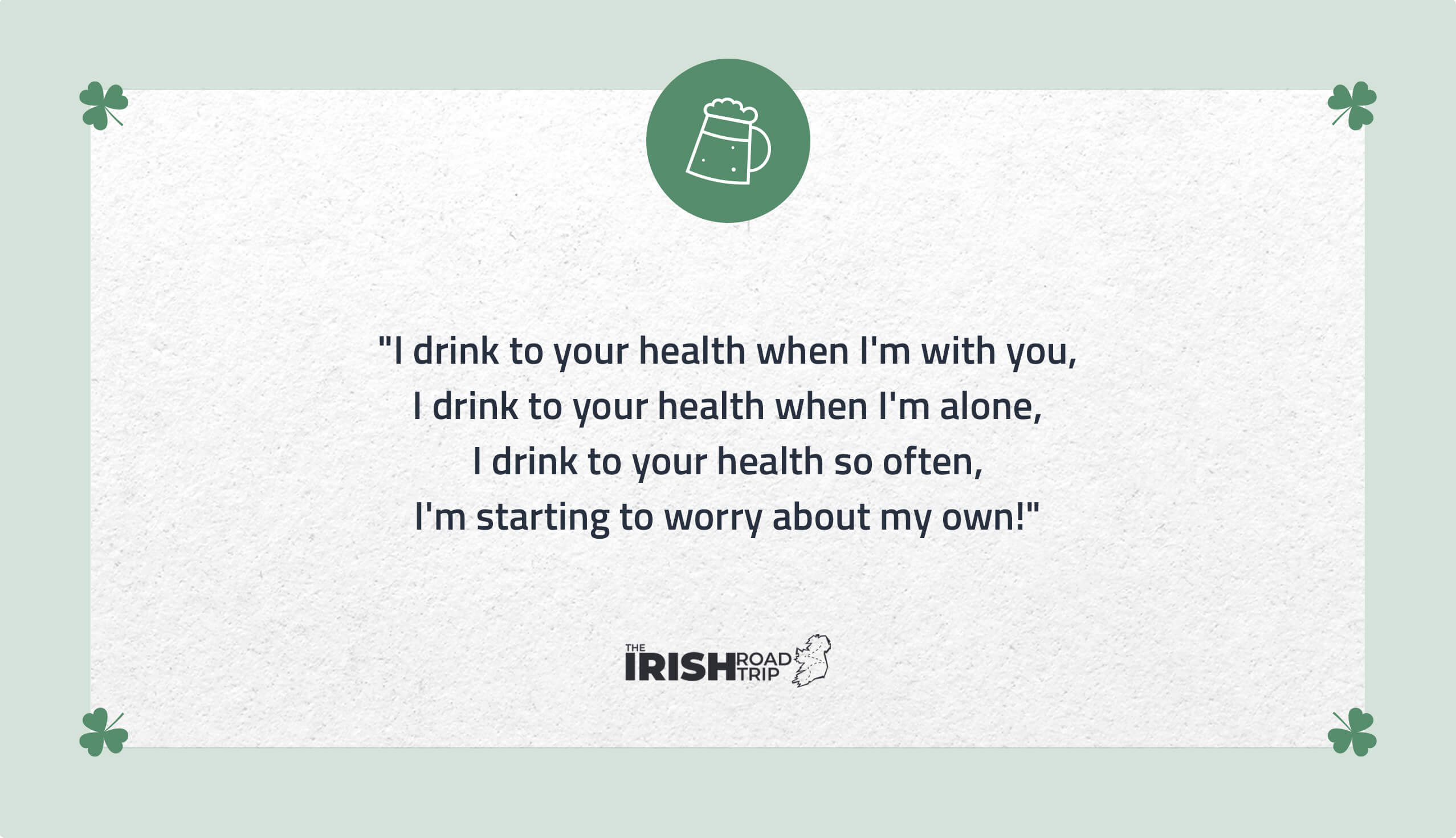 This is one of my favourite Irish drinking toasts as it combines light, inoffensive humour with a good rhyming pattern.

Although not suitable for a wedding, you could easy whip it out during the afters at an appropriate time. 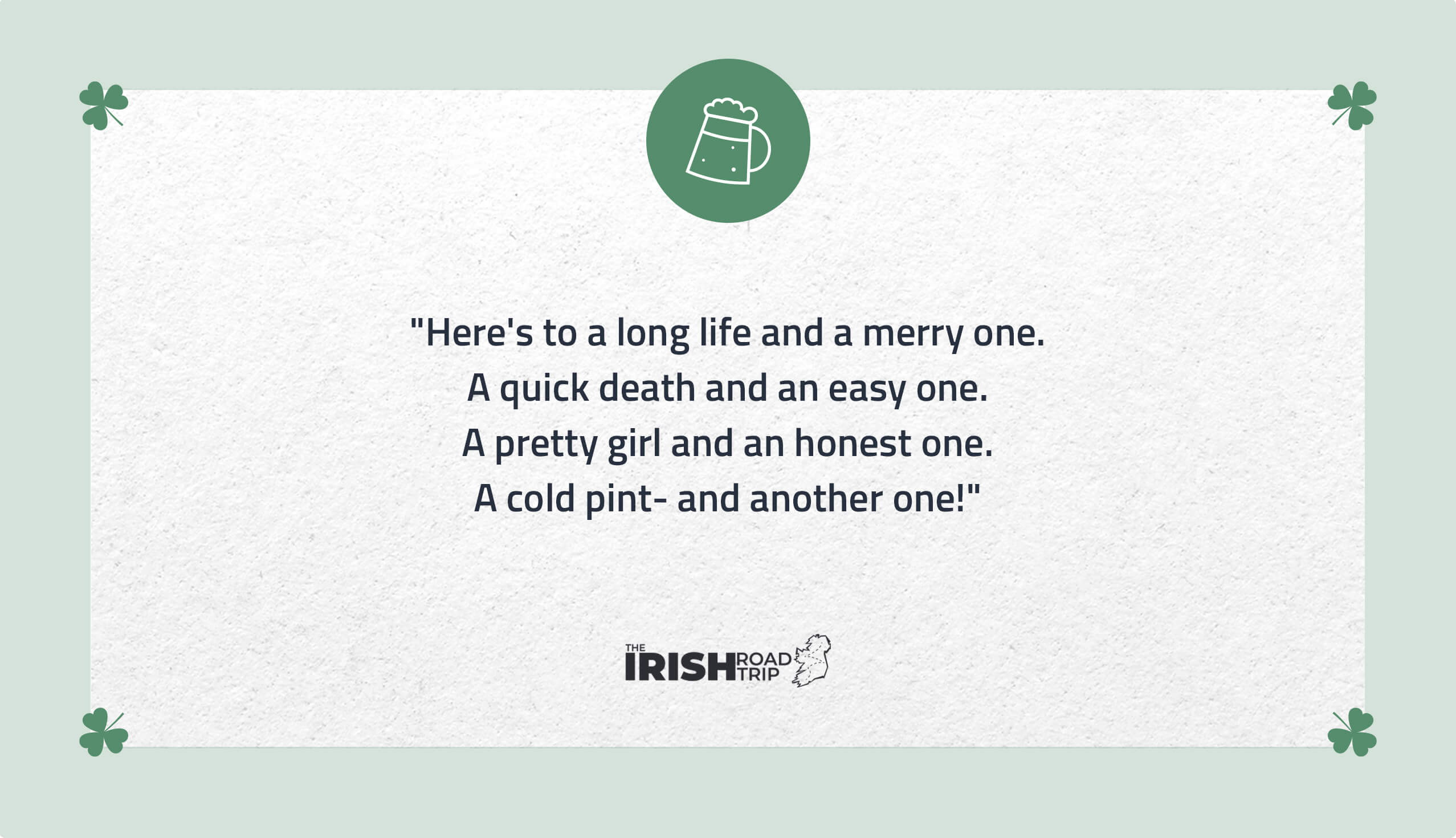 Next up is one of the more popular Irish cheers sayings, and it’s likely you’ll have come across it before.

You could use this in a variety of settings, from weddings or a family gathering to a birthday and everything in between.

“Here’s to a long life and a merry one. A quick death and an easy one. A pretty girl and an honest one. A cold pint- and another one!”

6. An Irish drinking toast to friendship 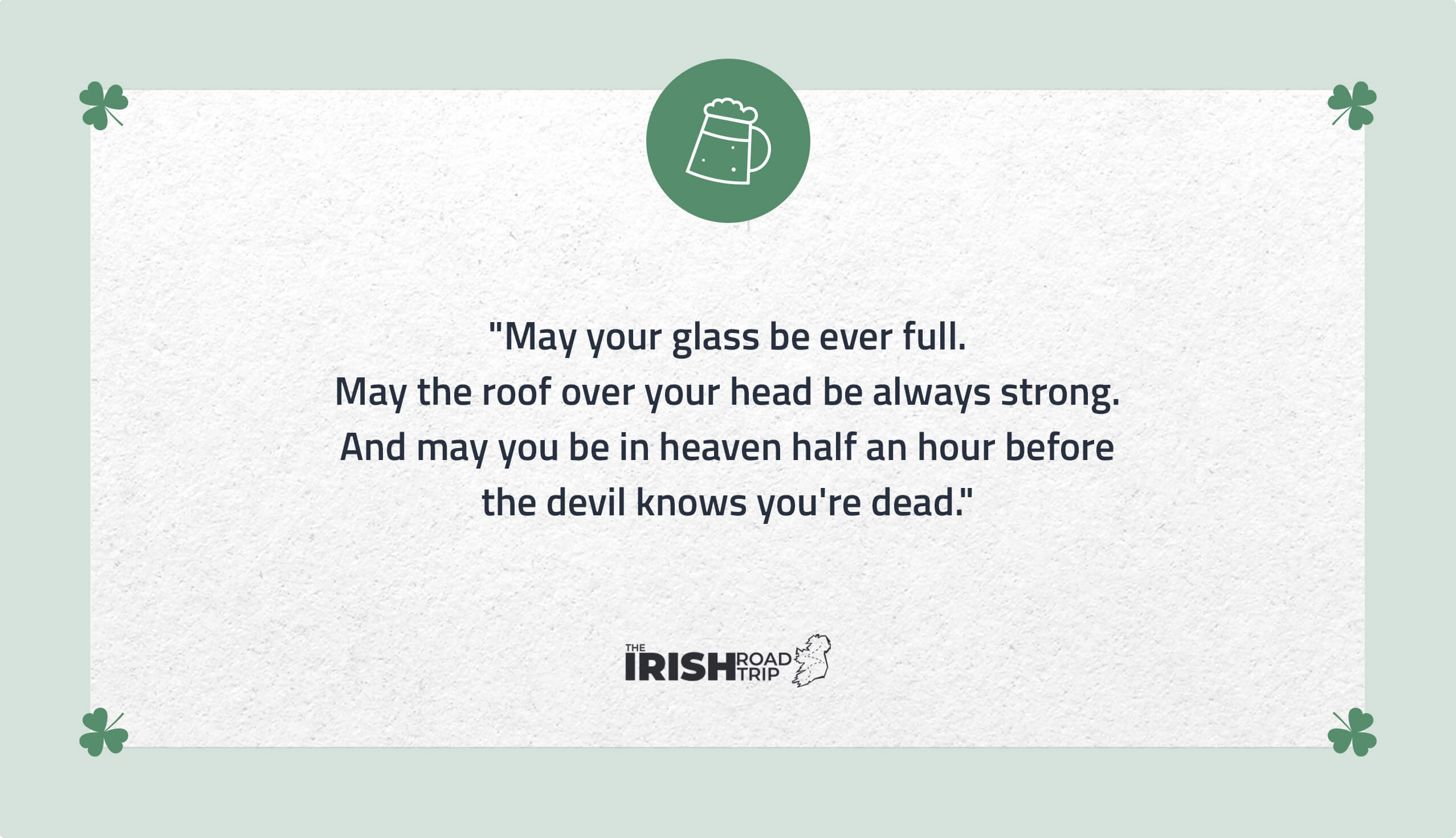 The majority of Irish cheers sayings revolve around friendship and wealth.

This toast, while short and sweet, packs a punch. It’s length makes it easy to remember and recite, too!

“May your glass be ever full. May the roof over your head be always strong. And may you be in heaven half an hour before the devil knows you’re dead.” 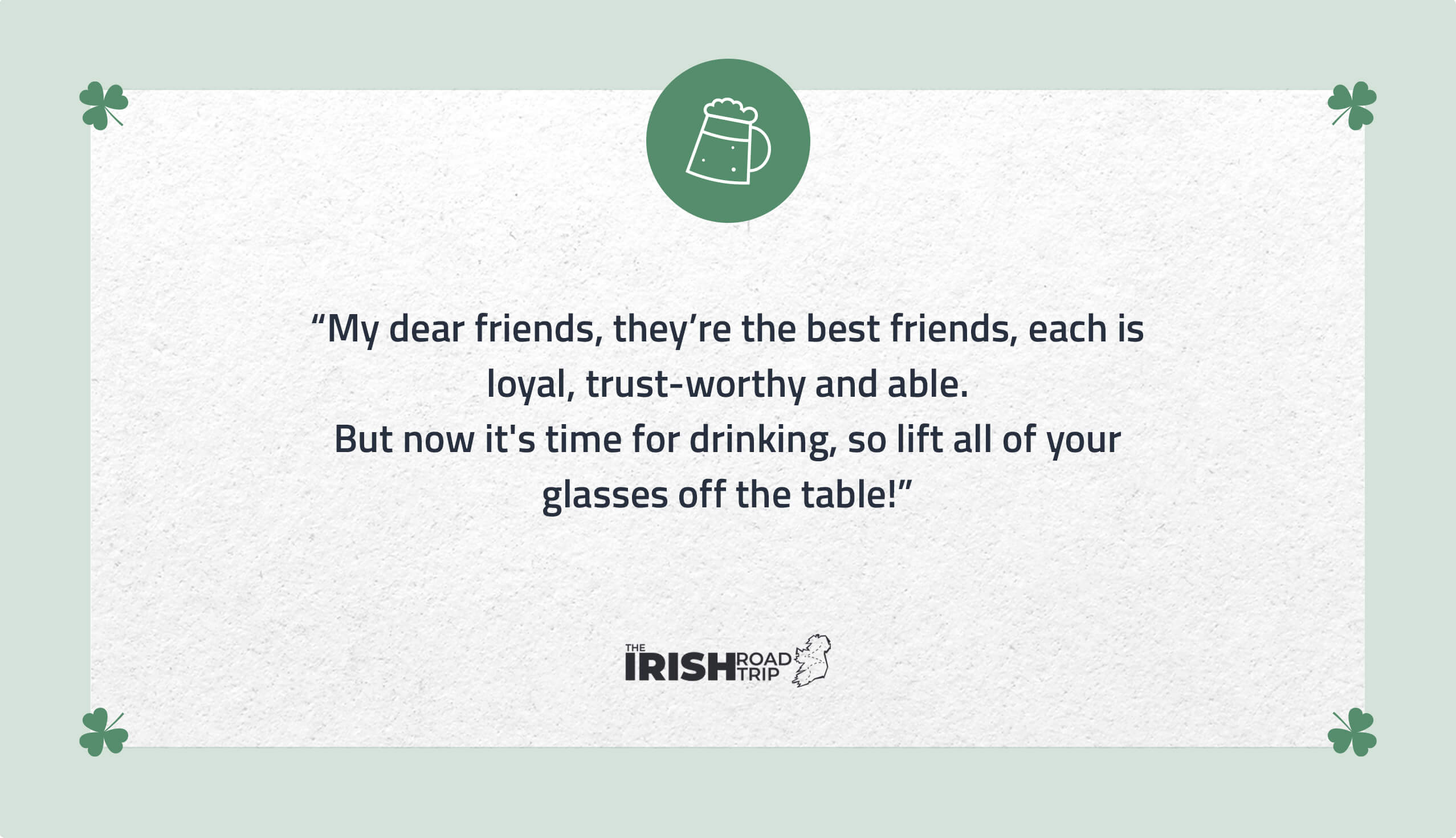 Yes, our next Irish drinking toast revolves around friendship, like many of the others above.

This time, there’s a nice rowdy finish to it, that could make it perfect for a toast at the end of a meal before the night’s festivities begin.

“My dear friends, they’re the best friends, each is loyal, trust-worthy and able. But now it’s time for drinking, so lift all of your glasses off the table!” 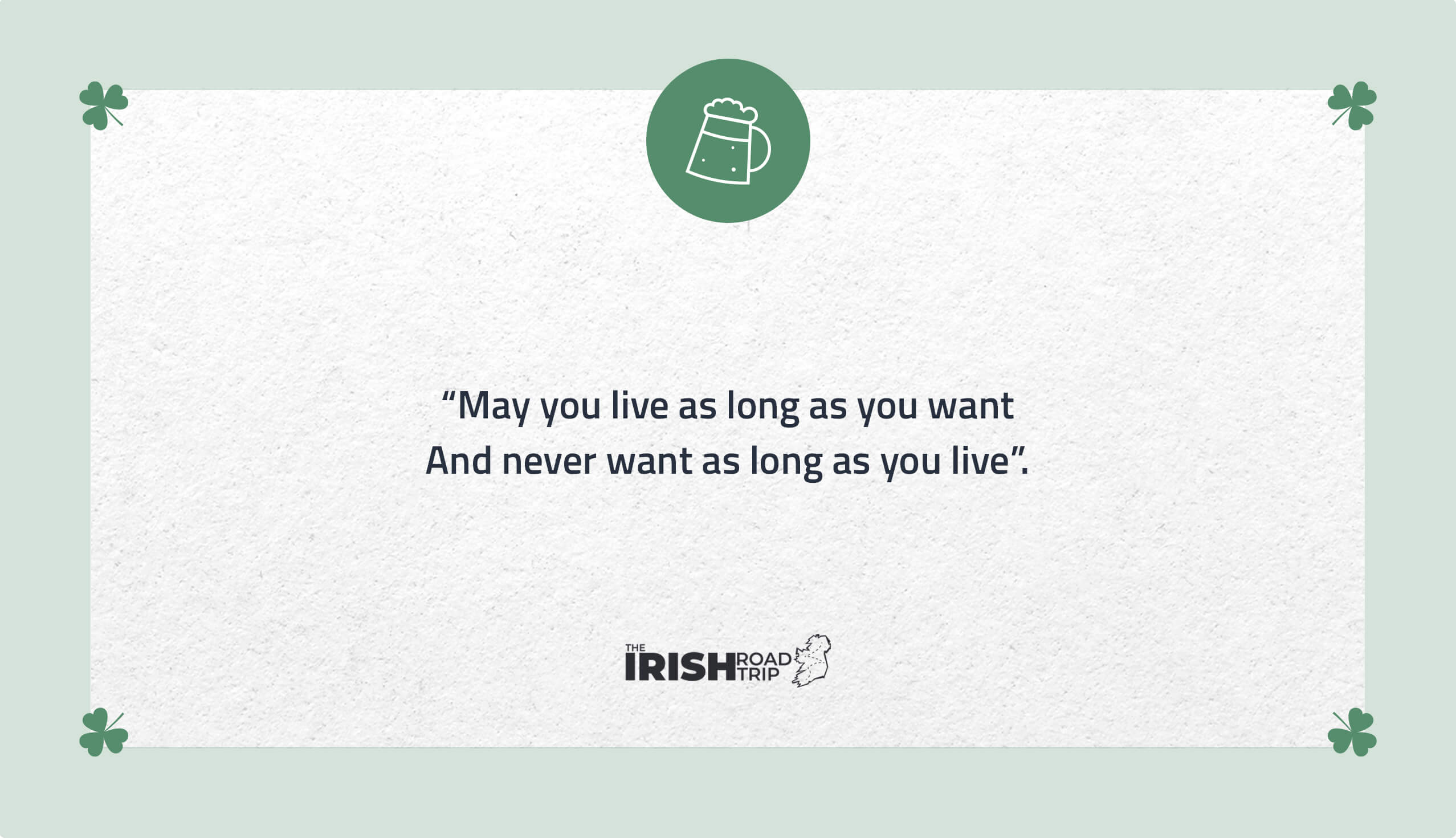 Some of the best Irish drinking toasts are short and sweet and pack fine aul a punch.

This is a handy, easy-to-deliver toast that’s perfect for a person of few words.

9. A toast for prosperity 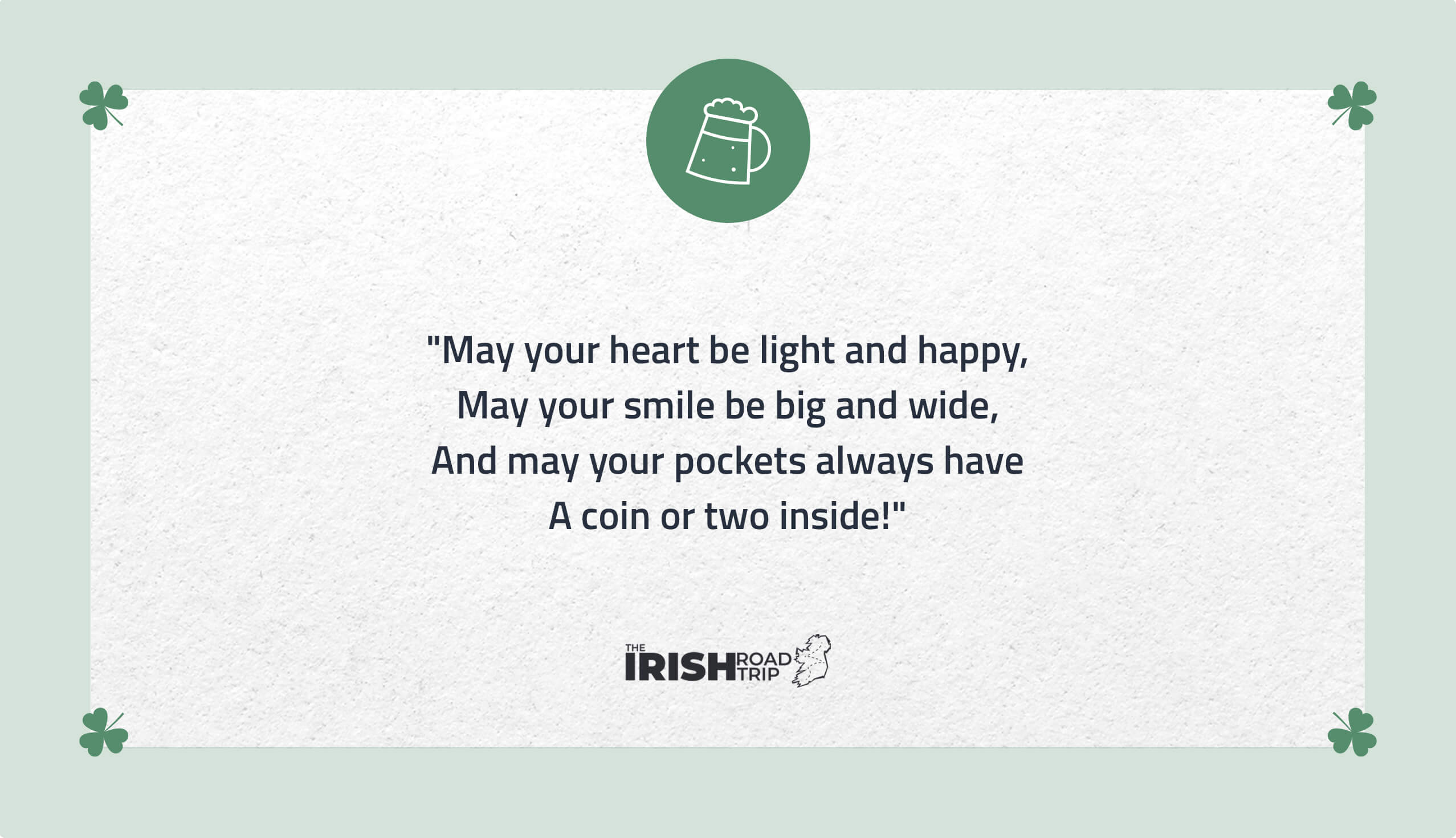 If you’re in search of Irish cheers sayings that wish prosperity upon your audience, this next one is ideal.

Easy to memorise, it’s arguably not too suitable for a wedding and would likely work better when wishing toasting someone embarking on a new journey.

“May your heart be light and happy, May your smile be big and wide, And may your pockets always have, A coin or two inside!” 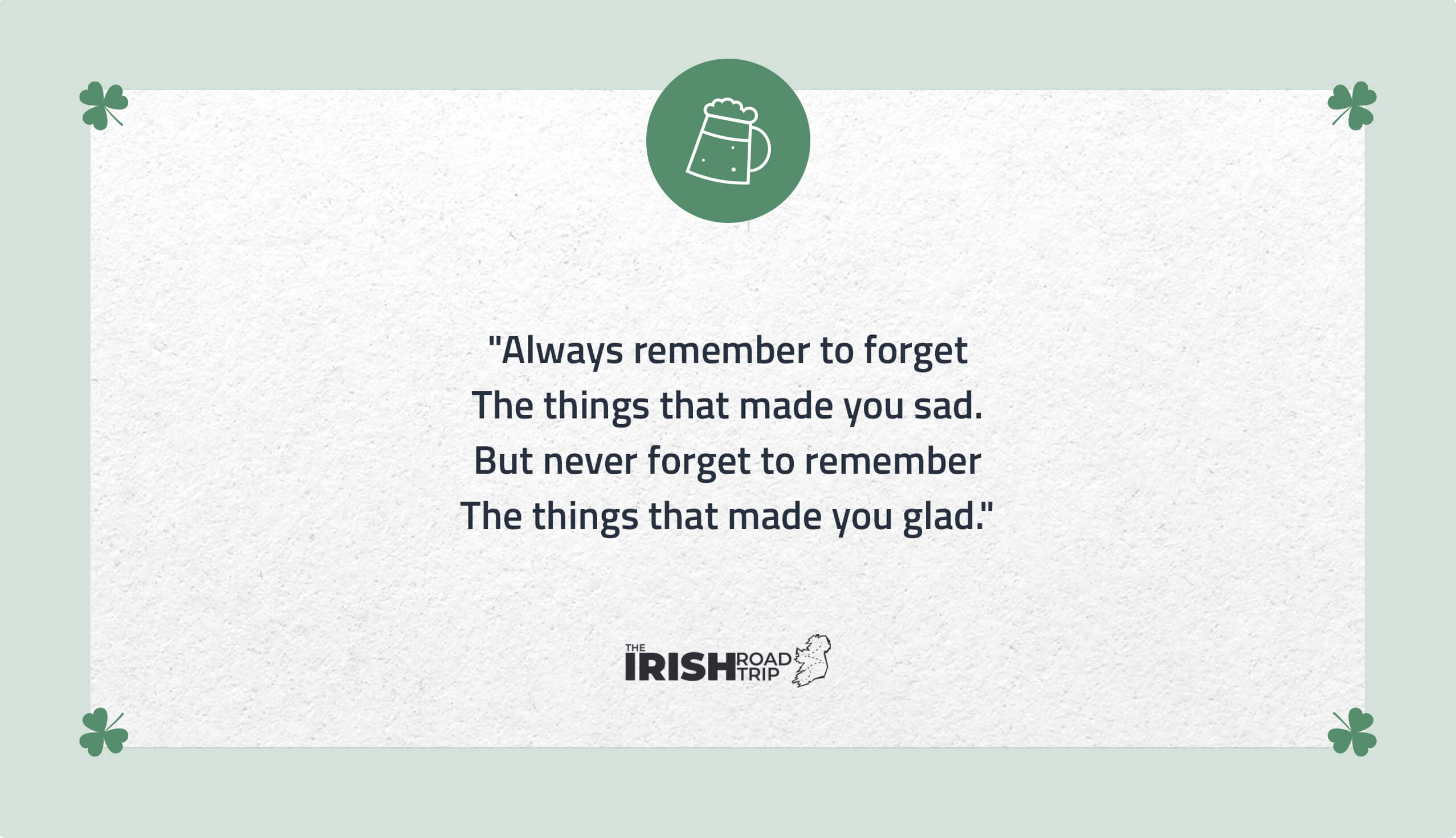 Toasts like this one tend to be used to mark the departure of someone, whether it be to a far off land or somewhere else.

There’s a feeling of melancholy of this one and it’s likely one you could recite and remember forever more. 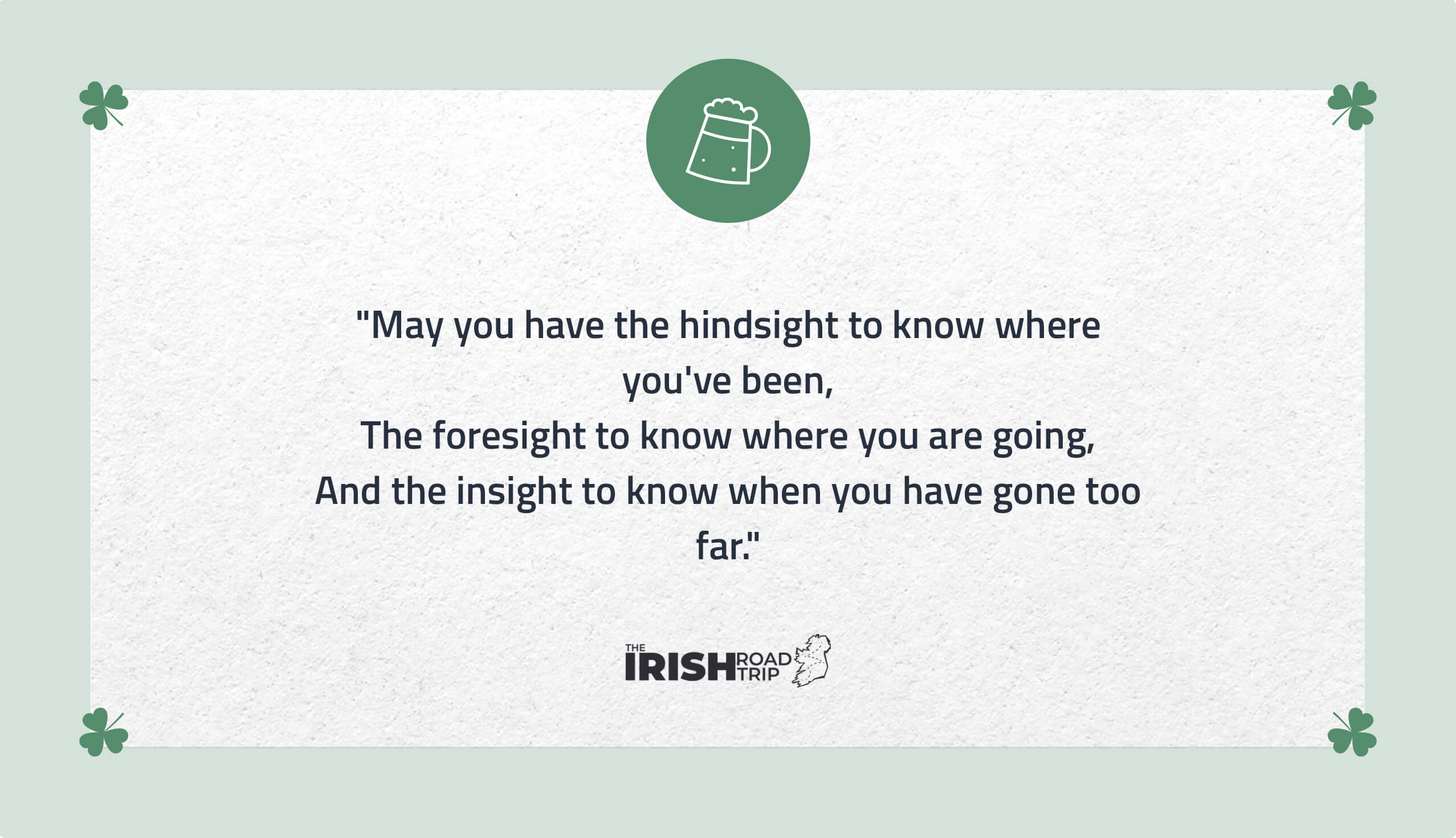 Hopefully the last line of this one won’t be directed at someone who’s gone too far on the night that you’re making this toast!

You might recognise this one from our Irish wedding toasts guide. It’s a great wedding toast but also perfect for a family occasion.

12. A toast to friends for life 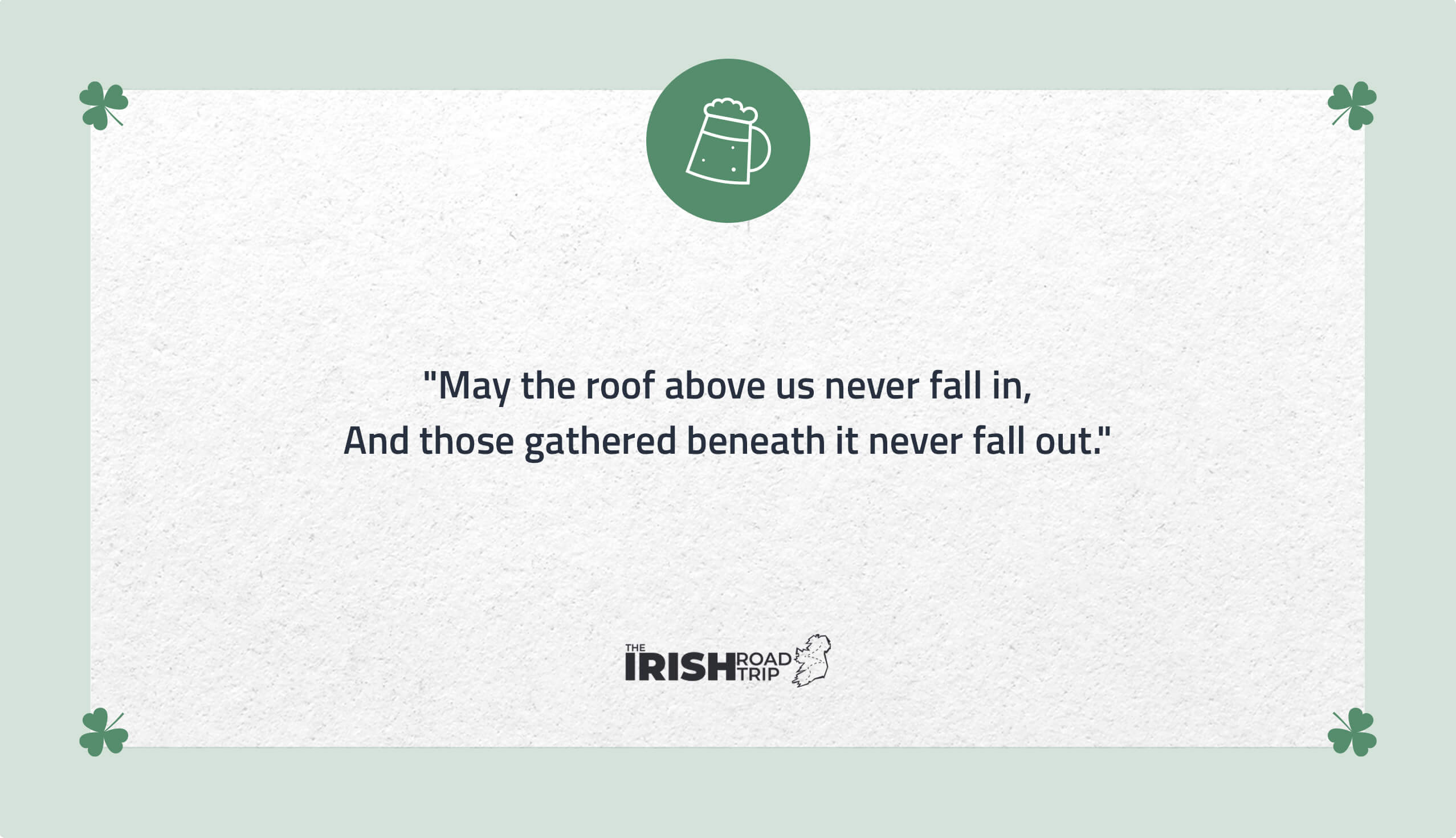 This is one of the more popular Irish cheers sayings and it’s perfect for using amongst close friends.

Also, thanks to it’s shortness, you’ll remember it with ease and have no trouble recalling it at a later date.

“May the roof above us never fall in, And those gathered beneath it never fall out.”

We’ve had a lot of questions over the years asking about everything from ‘What is cheers in Irish?’ to ‘How do you toast before a pint?’.

What are some short Irish drinking toasts?

What do the Irish say before drinking?

So, many people think ”Sláinte” is used heavily in Ireland before drinking, but it isn’t. Yes, you’ll hear it in some places, but it’s not used far more often than it is.