The Strangford Ferry (AKA the Portaferry Ferry) is a handy (and scenic) bit of public transport.

It takes you to and from the gorgeous Ards Peninsula in County Down and goes between Portaferry and Strangford.

Below, you’ll find info on everything from how long it takes to what to see on both sides!

Some quick need-to-knows about the Strangford Ferry 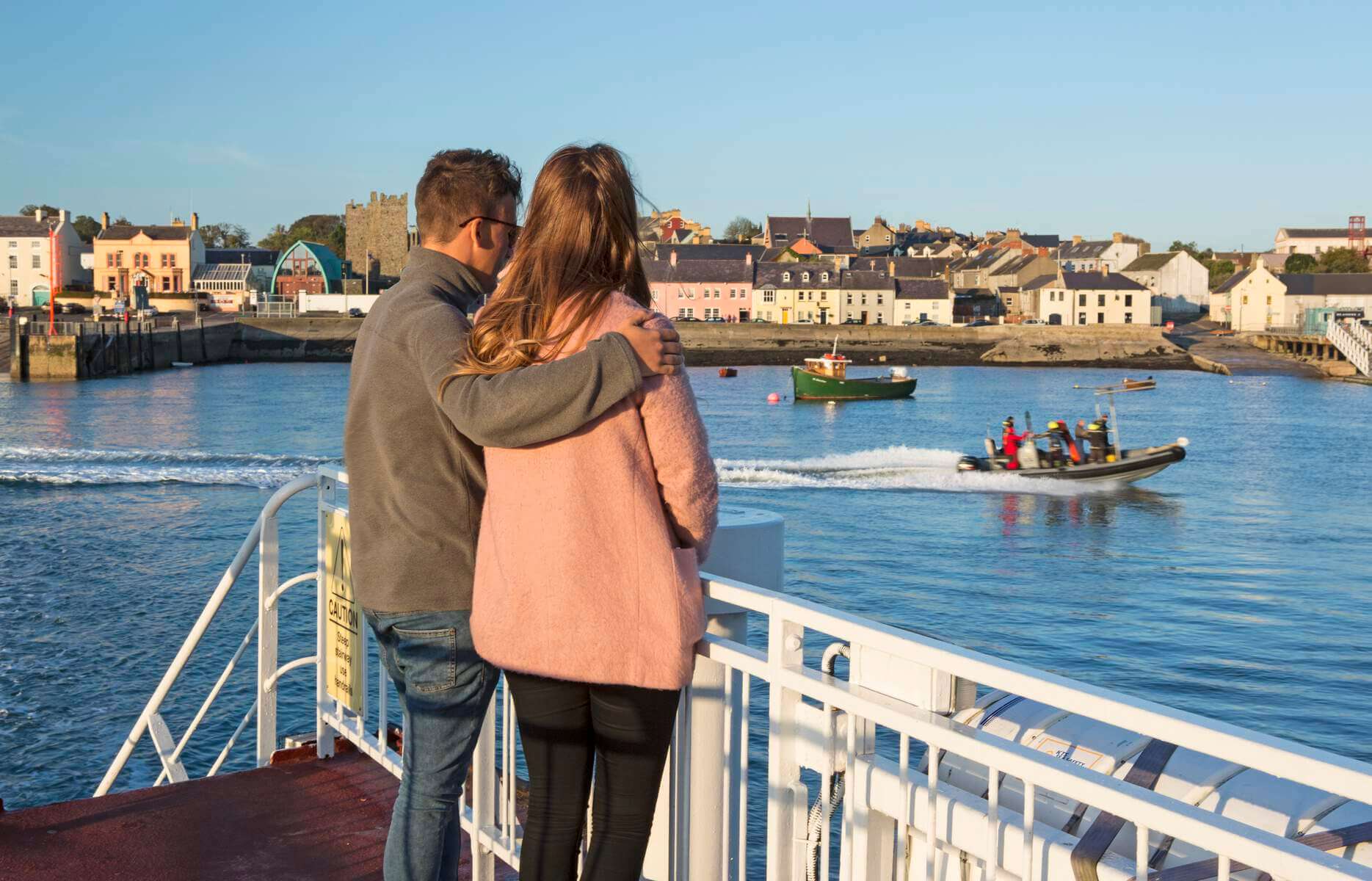 Although getting the Strangford / Portaferry Ferry is fairly straightforward, there are a few need-to-knows that’ll make your visit that bit more enjoyable.

1. Where it leaves from

The Strangford Lough ferry sails between Portaferry and Strangford in County Down. The two towns sit opposite each other at the southern end of Strangford Lough and the Ards Peninsula near the Narrows, which is where the lough meets the sea. They are both quiet little coastal villages.

The journey across the waterway takes between 6 and 10 minutes, which is much quicker than the estimated alternative road journey that is around 76km to get to the other side of the peninsula.

Prices for the Strangford / Portaferry Ferry vary quite a bit, with a single ticket for a vehicle and driver starting at £5.80 (£10 return). If you’re travelling by bike or on foot, it’s just £1 (£2 return). Find the most up-to-date prices here.

The Strangford Lough Ferry departs on the hour and on the half hour every day (up-to-date timetable here). Here’s when the Strangford Ferry leaves:

And here’s when the Portaferry Ferry leaves:

About the Strangford / Portaferry Ferry 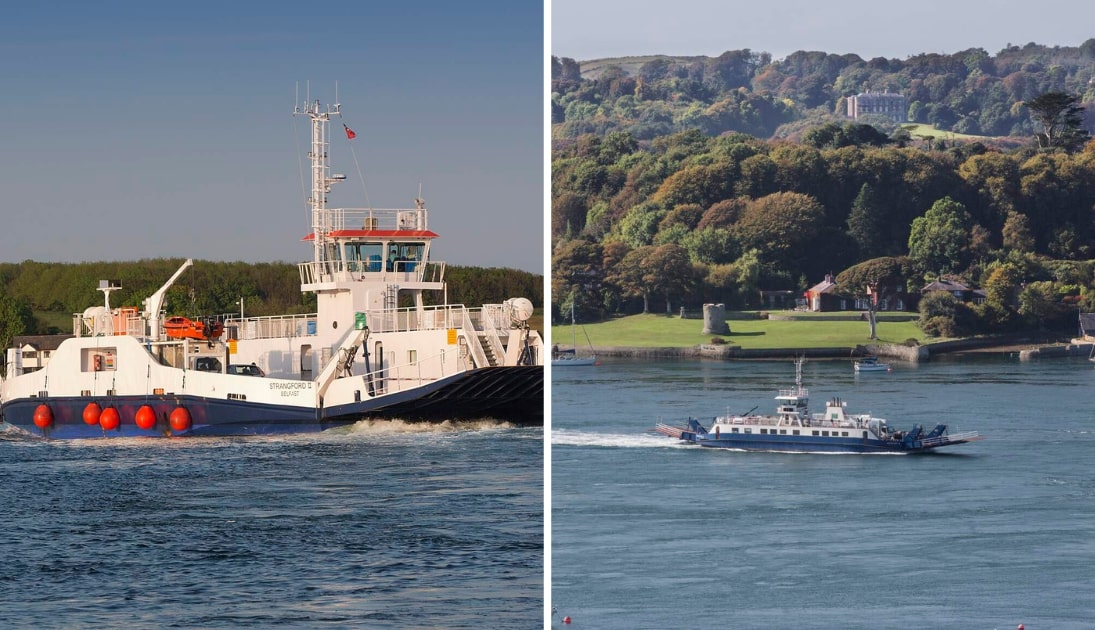 The Strangford Ferry service crosses the lough at its narrowest point at the southern end, close to where it joins the Irish Sea.

It connects the A2 road across the peninsula and has been running continuously for four centuries.

History of the ferry

It was way back in 1611 when James I granted land on either side of the Narrows for a ferry service. In 1835, a group of local people formed the Portaferry and Strangford Steamboat Company and commissioned the first steam ferry in Ireland.

Various vessels have since been in use across the service, including some tragic incidents in 1913 and 1946 when lives were lost in capsizes.

Currently, the service has two ferries, the MV Portaferry II which was introduced in 2001. It has a gross tonnage of 312 tons and can hold up to 260 passengers and 20 cars.

In 2017, the MV Strangford II was introduced with a gross tonnage of 405 tons and a capacity to carry 260 passengers and 27 cars.

Things to do when you get to each side 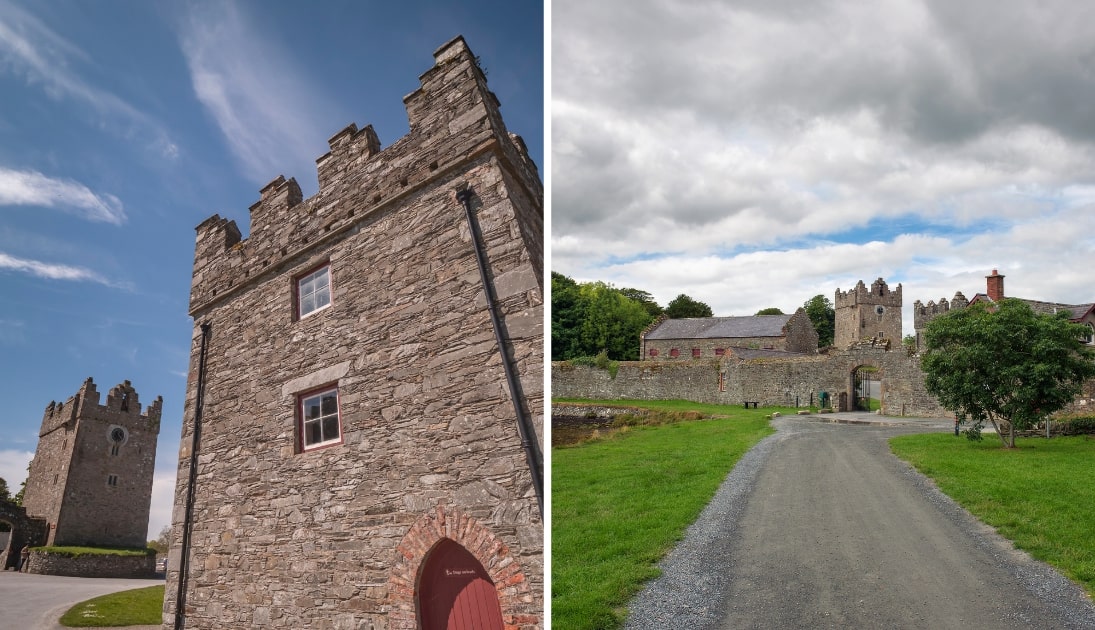 There are plenty of things to do in the towns and surrounding areas on either side of the ferry crossing.

1. On the Portaferry Ferry side

Portaferry is a pretty little town on the Narrows. It has several attractions to check out if you find yourself wandering the streets. The biggest attraction in Portaferry is Exploris Aquarium, a family friendly aquarium and museum with sea life and reptiles on display and live shows throughout the day.

Further afield, you can explore the southern part of the Ards Peninsula, including the incredible beaches like Cloughey Bay Beach and Ballywalter Beach. The quiet peninsula has stunning scenery and quiet roads for a beautiful drive around the coast.

2. On the Strangford Ferry side

Another quaint seaside village on Strangford Lough, Strangford is a nice town to stroll the streets. However, there’s plenty of things to do within a short drive too.

The National Trust Castle Ward, Winterfell Castle and Demesne and Audleys Castle are all just a couple of miles away.

Further south of Strangford, you’ll also find St John’s Point Lighthouse and Rossglass Beach and Tyrella Beach, which are great spots to take the whole family for a day by the sea.

FAQs about the Strangford Portaferry Ferry

We’ve had a lot of questions over the years asking about everything from ‘What are the times?’ to ‘Does it take long?’.

How long does the Strangford Ferry take?

The journey across the waterway takes between 6 and 10 minutes, which is much quicker than the estimated alternative road journey that is around 76km to get to the other side of the peninsula.

When does the Portaferry go?

The Strangford Lough Ferry leaves on the hour and on the half hour every day, aside from Christmas Day.

Hi, thanks for a informative guide in Northern Ireland. We are visiting Belfast the beginning of December and we would like to travel on the ferry. What would you suggest, to drive to Strandfod lough from Belfast and catch the ferry there or travel to Portaferry and catch it there?? Also to have a nice lunch along the way, where??? I'm bring a Viking Swede with me!!!!!!!!