There are plenty of things to do in Castlebar‌, regardless of when you visit.

Castlebar is the county town of County Mayo and the town was a settlement that grew around the de Barry Castle built by in the 13th century.

Nowadays, it’s a wonderful place to base yourself while you tour Mayo, and the town offers plenty in the way of attractions, days out, pubs and restaurants.

In the guide below, you’ll discover lots of things to do in Castlebar‌ along with heaps of places to explore nearby.

Our favourite things to do in Castlebar 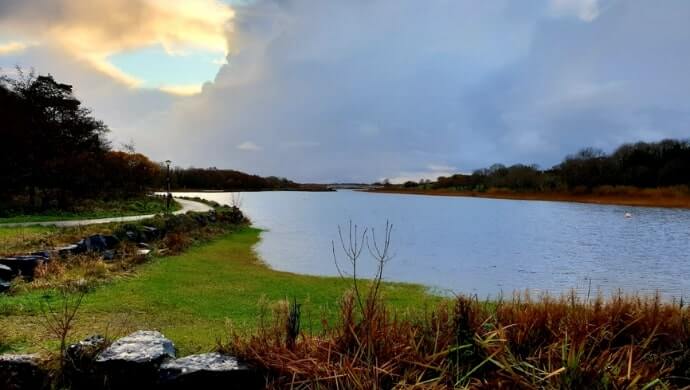 The first section of our guide tackles our favourite things to do in Castlebar‌, from food and beaches to some of the most popular places to visit in Mayo.

The second section of the guide tackles things to do near Castlebar‌ (within a reasonable driving distance, that is!)

1. Kick-start your visit with something tasty (or just coffee) from Cafe Rua 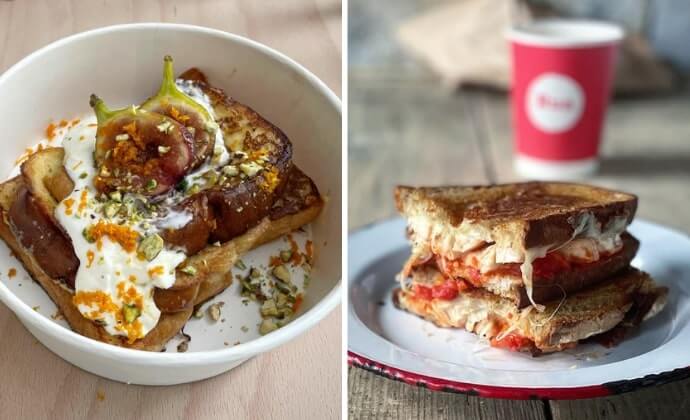 Fancy a tasty breakfast? Café Rua on New Antrim Street only uses Irish meat and fish in its menus, and mainly locally-grown fruit and veg (organic where possible). Freshly baked cakes include lemon drizzle and coffee and walnut.

There are loads of other cafes here, too, with great reviews, such as Tara Café for its paninis, apple pies and scones or Café Nova where you can get a chowder that comes in a giant bread bowl.

If you visit later in the day, you’ll find lots of great restaurants in Castlebar and plenty of great pubs, too!

2. Then head off on the Castlebar Greenway 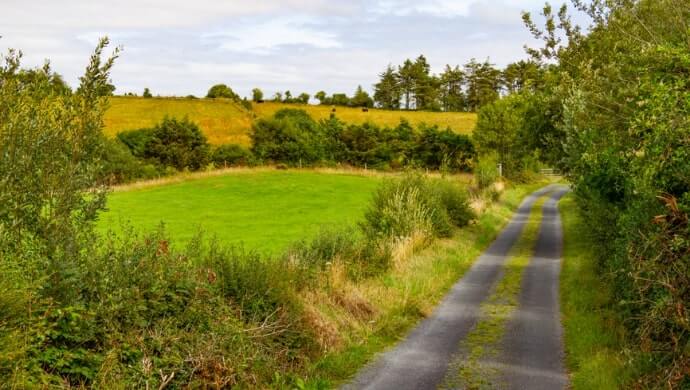 This trail is set along the Castlebar River Valley and is approximately 7 kilometres long. It skirts the banks of the river and takes you through open countryside, quiet minor roads and native woodlands before ending at the National Museum of Ireland.

Although not as popular as the Great Western Greenway, this is a gorgeous trail that’s well worth exploring, on bike or on foot.

If you’re in search of active things to do in Castlebar, you can’t go wrong with a day spent tackling the Castlebar Greenway.

3. Spend a rainy day at the National Museum of Ireland – Country Life 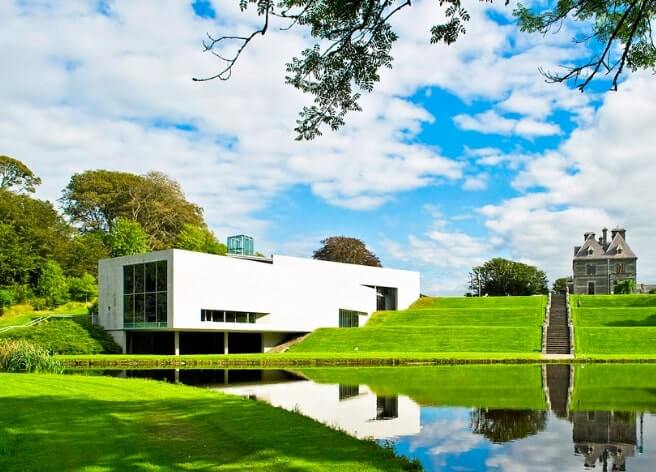 The National Museum of Ireland – Country Life houses a number of interesting collections. The Irish Antiquities Division, for example, has the Irish archaeological collection, which offers visitors insight into the development of Irish civilisation from the prehistoric times up until the end of the Medieval period and beyond.

The collection includes treasures such as the Tara Brooch, the Ardagh Chalice and the Derrynaflan Hoard, and is based on collections that were put together in the 18th and 19th centuries by the Royal Dublin Society and Royal Irish Academy.

There are now more than two million objects – prehistoric gold collections, ecclesiastical metalwork and personal ornaments from the early medieval time, and the Viking Dublin assemblage.

If you’re wondering what to do in Castlebar on a rainy day, you can’t go wrong with a few hours spent wandering around here.

4. And a sunny one rambling around Lough Lannagh

Lough Lannagh is an urban park and walking trail located just off the old Westport Road. It’s just under 2 kilometres and takes you around the shores of the lough, taking in native wildflowers and tall grasses – the perfect countryside escape and yet set in an urban location.

There is also a children’s playground and outdoor exercise equipment for those in an energetic mood. Look out, too, for all the ducks and swans that have made the lough their home, and don’t forget to keep an eye out for Croagh Patrick off in the distance.

If you’re looking for things to do in Castlebar‌ with friends, this place should be right up your street. Grab a coffee from the town and ramble along the banks of the Lough.

Other popular things to do in Castlebar (and close by) 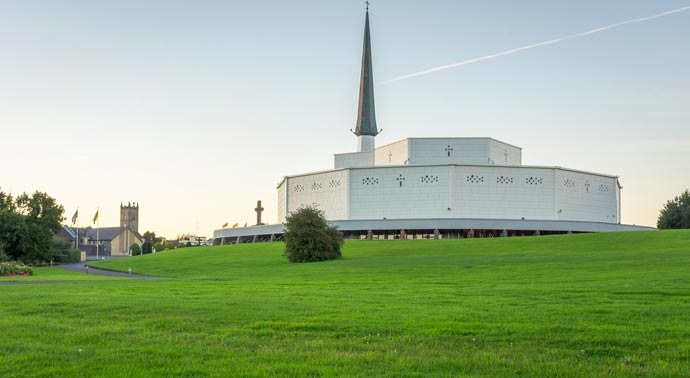 Now that we have our favourite things to do in Castlebar‌ out of the way, it’s time to look at some other great activities and places to visit in Castlebar‌ and close by.

One of the beauties of the town is that it’s a short spin from many of the best places to visit in Mayo. You’ll discover some of our favourites below. 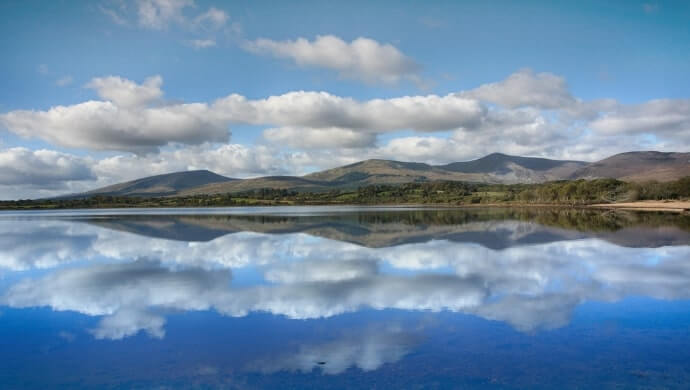 If you loves getting out and about in the fresh air, you’re in the right place. Raheens Wood is an eight-minute drive away from Castlebar, while Nephin, the highest standalone mountain in Ireland is 32 minutes away

Although the latter is only suitable for those with experience and a good level of fitness. Mayo Peace Park in the town itself – a garden of remembrance that commemorates all those who served and died in major world wars and conflicts in the 20th century, is worth a visit, too.

Related read: Check out our guide to the best hotels in Castlebar (with something to suit most budgets)

2. See the waterfall in Tourmakeady Woods (27-minutes away) 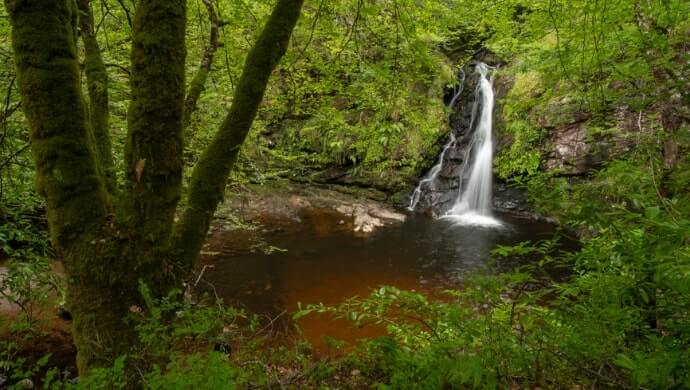 Tourmakeady Waterfall is located at the base of the Partry Mountains and along the western shore of Lough Mask. The scenery in this area is spectacular and it’s a lovely place for an evening stroll or to do some hill walking.

Walk options vary from 5 to 8 kilometres. The shortest walk is a track/path walk through the Tourmakeady Woods that passes an amazing waterfall.

If you’ve tackled the walks listed in the things to do in Castlebar section of our guide, this should be first on your list of rambles to conquer next. 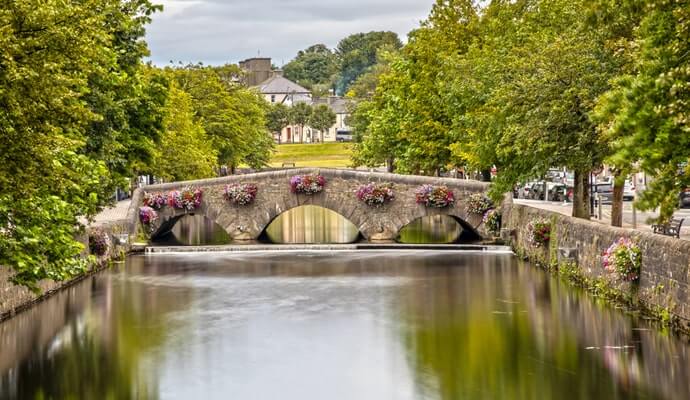 There’s an almost endless number of things to do in Westport and within easy reach of the town, from Westport House to the incredible Doolough Valley.

There are also plenty of pubs and restaurants in Westport, if you fancy nipping over for the evening. The town is a joy to ramble around with a coffee, although it gets very busy during the summer months. 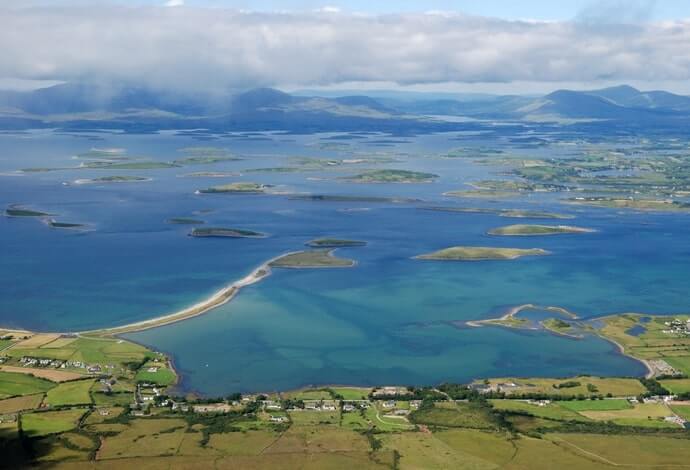 Croagh Patrick is Ireland’s Holiest mountain and is situated a short spin from Westport. Climbing it affords the hiker magnificent views of Clew Bay and the surrounding countryside.

The Teach na Miasa is the Croagh Patrick Visitor Centre and can be found in Murrisk on the Pilgrim’s path at the base of Croagh Patrick mountain behind the public car park. Make sure to call and visit.

Knock Shrine attracts more than 1 million visitors every year, many of them keen to find out more about the apparition that took place in the village in 1879.

It was here that 15 witnesses saw a vision of the Blessed Virgin, St Joseph, St John the Evangelist and the Lamb of God.

At the shrine, you can embark on the guided tour, visit the museum, take time to contemplate life in a quiet, peaceful surroundings, take part in mass and admire the mosaic that illustrates the apparition on the night it happened.

6. Whittle away and evening in one of the towns many traditional pubs 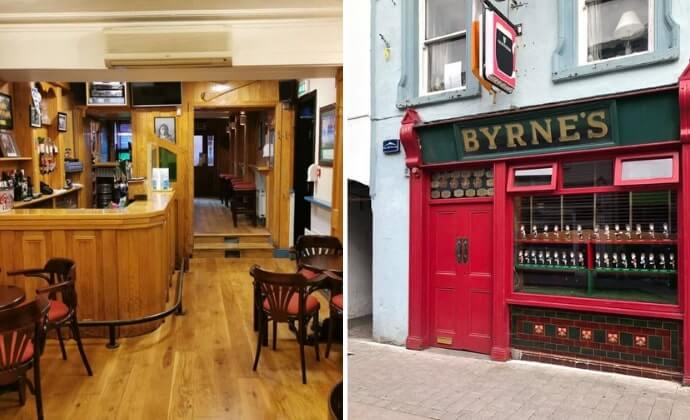 You won’t need to go far to find a pub in Castlebar, as it has more than its fair share of fabulous places to listen to traditional Irish music, enjoy a pint of Guinness and the craic.

Mick Byrne’s Bar offers a warm welcome and complimentary snacks for drinkers. John McHale’s Pub is one of the oldest pubs in Castlebar and is known for its sale of a Meejum measure of Guinness (slightly less than a pint).

7. Discover the story behind Ballintubber Abbey (13-minutes away) 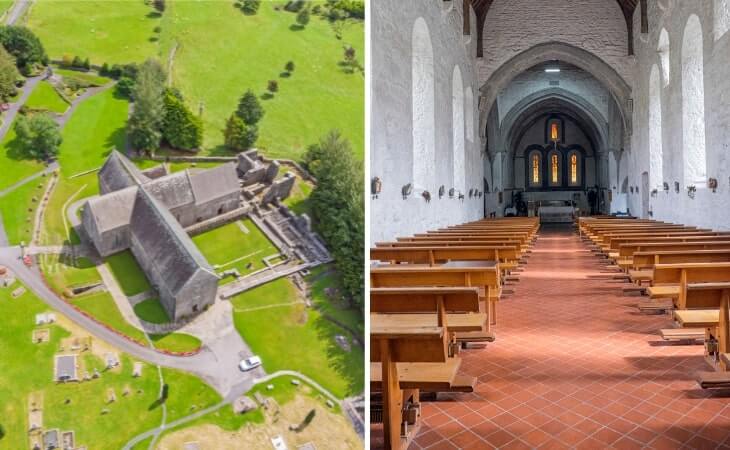 Ballintubber Abbey is arguably best known for its impressive record – it has provided mass services, uninterrupted, for 800+ years, religious upheavals notwithstanding.

The original abbey was founded by King Cathal Crovdearg O’Conor in 1216, the abbey was built to replace an old crumbling church in the area.

Although legislation was passed in Tudor times dissolving monasteries, this proved difficult to enforce in Ireland, and worship continued – even after Cromwellian soldiers burnt many of the buildings.

You can tour the abbey and see the famous St Patrick’s Well, where St Patrick baptised new converts to Christianity in the 5th century.

8. Take a spin over to Achill Island 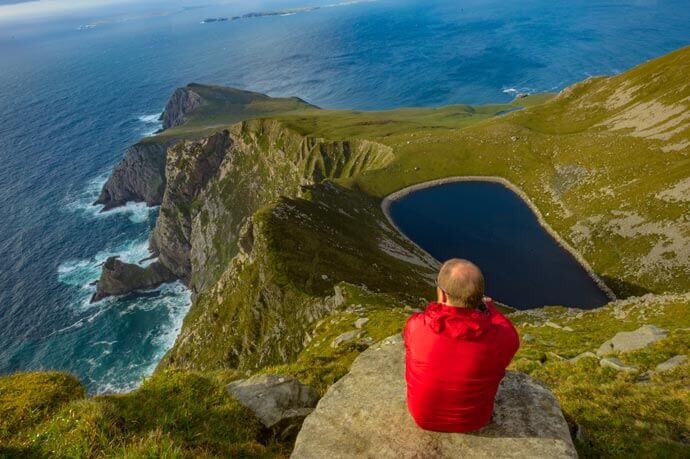 Ireland’s west coast is dotted with beautiful little islands, some of them inhabited, some of them not. Achill Island is the largest and has a population of just over 2,500.

It is attached to the mainland by the Michael Davitt Bridge and early human settlements are believed to have established themselves on the island around 3000 BCE.

In our guide to the best things to do in Achill, you’ll find everything from the Croaghaun cliffs (the highest in Ireland) to the beautiful Keem Bay.

What to do in Castlebar: Where have we missed?

I’ve no doubt that we’ve unintentionally left out some brilliant things to do in Castlebar‌ from the guide above.

FAQs about the best things to do in Castlebar

We’ve had a lot of questions over the years asking about everything from active things to do in Castlebar‌ to where to visit nearby.

What are the best things to do in Castlebar‌?

I’d argue that the best things to do in Castlebar are to cycle the Castlebar Greenway, to step back in time at the National Museum of Ireland – Country Life and to ramble around Lough Lannagh.

Is Castlebar‌ worth a visit?

Yes – the lively little town of Castlebar‌ is well worth a visit. Although there isn’t a huge number of things to do in Castlebar‌ itself, it’s a lovely little base to explore Mayo from.

Where is there to visit close to Castlebar‌?

There’s an endless number of places to visit near Castlebar‌, from mountains and coastal drives, to beaches, gorgeous towns and historical sites.

Are there camping car facilities in C'bar