If you’re debating a visit to Tory Island in Donegal, you’ve landed in the right place.

Tory Island is Ireland’s most remote inhabited island  and you’ll find it 12km off the coast of northern Donegal.

The island’s isolation has contributed to the preservation of its traditional way of life and it is both a visually and culturally fascinating place to explore.

In the guide below, you’ll find info on everything from how to get to Tory Island and things to do to why this is one of the most unique attractions in Donegal.

Some quick need-to-knows about Tory Island in Donegal 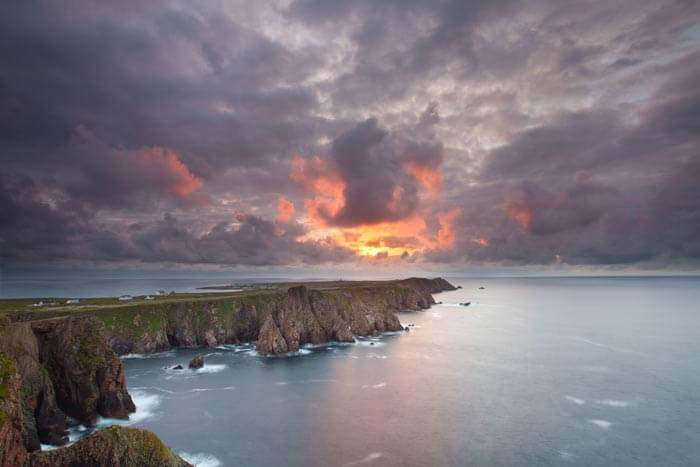 Although a visit to the island is fairly straightforward, there are a few need-to-knows that’ll make your visit that bit more enjoyable.

You’ll need to take the Tory Island Ferry (info below) from the harbour at Magheroarty (not far from Magheroarty Beach).

There are few places in Ireland quite like Tory. Over the centuries, the island has witnessed the arrival of the Fomorians (a supernatural race from mythology), sieges and the sinking of WW1 boats (more info below). 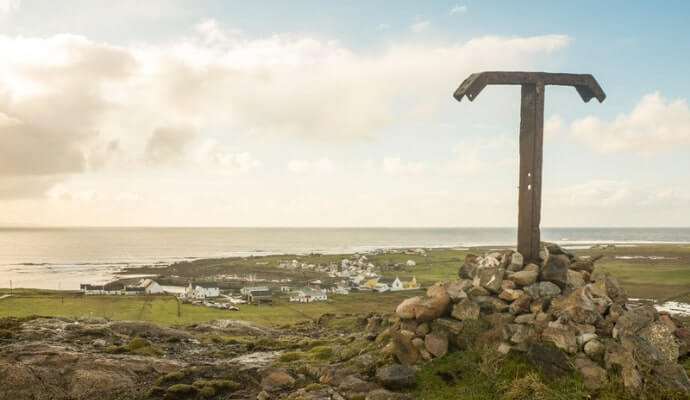 Photo by DorSteffen on shutterstock.com

Tory Island is located 12km off the northwest coast of County Donegal. The rugged island is known as Ireland’s most remote inhabited landmass and is just two and a half miles long and three quarters of a mile wide.

The island is arguably best known for the ‘King of Tory’ tradition, but we’ll go into that in a moment.

There’s a fine bit of history tied to it. It’s said that the island was the site of a tower inhabited by Conand – the leader of the Fomorians – a supernatural race from Irish mythology.

According to legend, many years later the same tower was called home by Balor – another leader of the Fomorians. He is regurally described as a massive eye. Yes, an eye.

In the 6th century, Colmcille (an Irish abbot) founded a monastery on Tory and it stood proudly on the island until it was destroyed by English forces during their battle to suppress the islands chieftans.

More recently, in 1914, the first battleship to go down in WW1 toom place off the island. 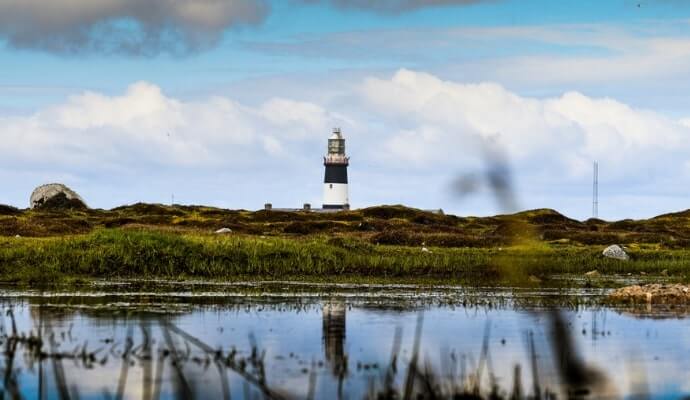 Photo by ianmitchinson on shutterstock.com

You’ll need to take the Tory Island Ferry to get to the island. Please pay particular attention to point number 4 about the tides:

1. Where / when it leaves from

The Tory Island Ferry leaves from Magheroarty Pier. The timetable varies throughout the year (info here) with the first crossing from the mainland taking place from between 09:00 and 10:30.

2. How much it costs

The tickets for the Tory Island Ferry (which you can book here) are pretty reasonable. Here’s how they stand at the time of typing:

The Tory Island Ferry takes 45 minutes to get from Magheroarty Pier to the island and vice versa.

As Magheroarty Pier is tidal, the Tory Island Ferry can be rescheduled or cancelled. It’s worth downloading the Tory Ferry App and checking that the ferry is going ahead before you leave home.

Things to do on Tory Island

There are plenty of things to do on Tory Island, from long and short walks to historic sites, diving and plenty more.

Below, you’ll find several worthwhile things to do on Tory Island, along with advice on where to eat, sleep and grab a post-adventure pint.

1. Stretch the legs on the Tory Island Loop Walk

Photo by DorSteffen on shutterstock.com

One of the best ways to explore Tory Island is by following this 4km loop walk. It starts in West Town and takes you around the edges of the island with views across the spectacular cliffs.

You can find a map board which outlines the loop at the pier as you disembark.

2. Learn about the King of Tory Island tradition

The history of the King of Tory fascinates many visitors to the island. The traditional title has a history that dates back to at least the 6th century, if not longer.

The role of the King was to be a representative of the island and he often greeted visitors coming off the ferry. The most recent king, Patsy Dan Rodger, died in October 2018 and at the time of his death, was the last remaining kingship in Ireland.

Diving is one of the most exciting activities with the clear water around Tory Island making it a great place to witness some unique marine life. The wreck of the HMS Wasp is also just off the island with a dive of about 15 metres deep.

If you’re interested in going for a dive head over to the dive centre at the Tory Island Harbour View Hotel (please only try solo diving if you’re experienced).

4. See Tau Cross on your own or on a guided tour

One of the most fascinating historical sites on Tory Island in Donegal is the Tau Cross. The cross is a reminder of the monastic period that ended in 1595 when English troops forced the monks to flee.

The cross is carved from a single slab and measures 1.9m high and 1.1m in breadth. You can visit it on your own or with an experienced guide (hit play above!).

Not far from the Tau Cross on the main street in West Town, you can visit this 6th century round tower. It has a circumference of almost 16m and a round doorway.

It’s the most impressive structure to have survived from the original monastery. 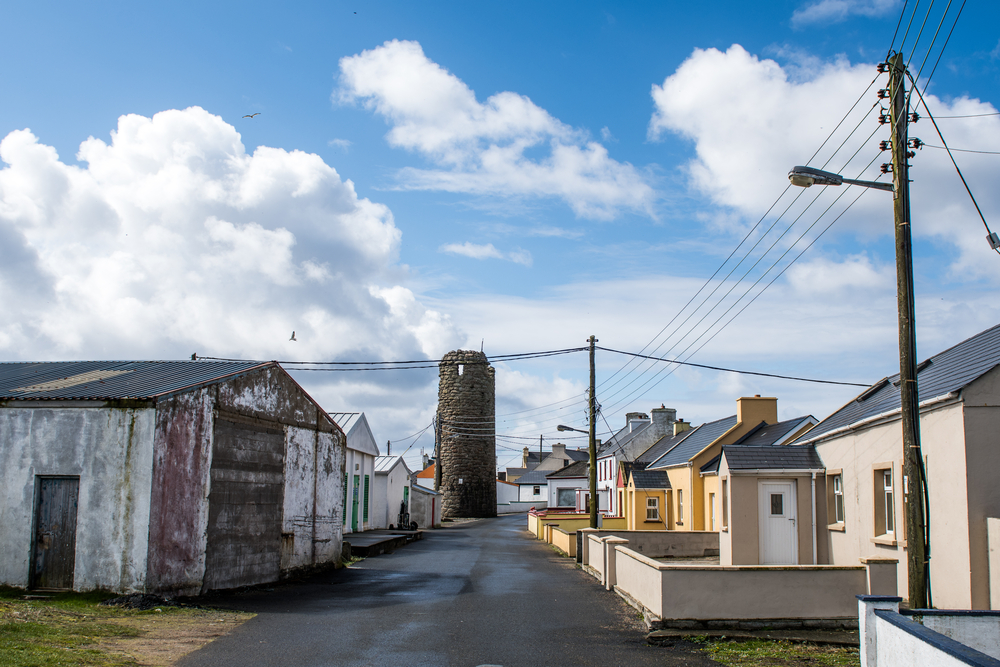 Photo by ianmitchinson on shutterstock.com

The Tory Island accommodation options are fairly limited, however, what is there is pretty good, so you’ll be fine once you book in advance.

The Tory Island Hotel is by far the island’s premier accommodation, dining and entertainment facility.

They have 12 comfortable en-suite bedrooms available as well as the People’s Bar for a drink and meal. It’s located in the main West Town area, not far from the ferry pier.

If you can’t get a spot in Tory Island hotel, there’s very limited alternative options. However, a handful of self-catering options have opened up.

Just keep in mind that these can fill up quick during the summer months.

Pubs and restaurants on Tory 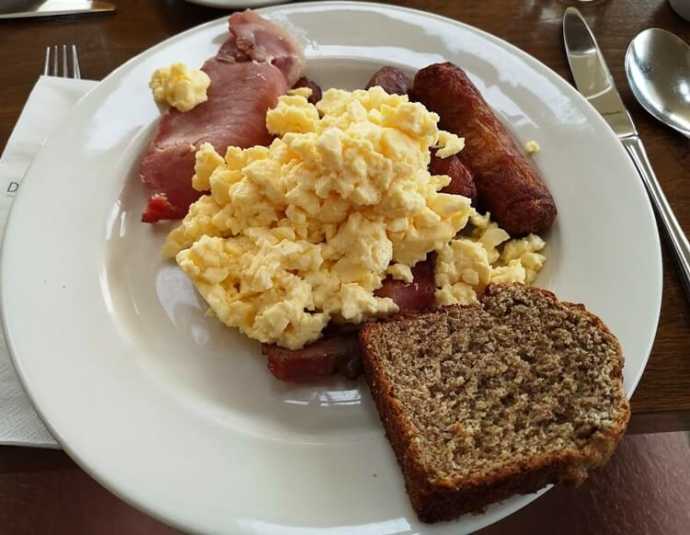 Tory Island has limited places to eat, but if you’re looking for a tasty feed and a drink to round-off the day, the below options will make your belly happy.

This cosy little bar is in West Town, just a short walk from the ferry pier. You can grab a pint of Guinness and a traditional pub meal, while chatting to the local barman. On a clear day you can set at a table outside for great views.

This is the main accommodation and restaurant on the island in West Town. It’s just a short walk from the pier and is the perfect place to grab a meal from the friendly staff. The outdoor tables look straight out over the harbour.

Can you stay on Tory Island?

Yes, you can. The main accommodation is the Tory Hotel but there’s also some self-catering options available on the island, too.

How do you get to Tory Island?

You need to take the Tory Island Ferry which takes 45 minutes and leaves from Magheroarty Pier not far from Falcarragh.

Hi - is there any accommodation on Tory Island for one night nest week?

Hey Mike - you'd need to reach out to the accommodation directly to check the dates. Have a great trip!

hi, cant find any info. is there on Tory island allowed to stay with tent? tanks