In this guide, you’ll discover the most popular traditional Irish instruments that are used to bang out Irish traditional music.

If there’s one thing that Ireland is world-famous for, it’s music.

After all, it’s the only country in the world that has a musical instrument (a harp) as its national emblem.

The distinctive melodic sounds that epitomise Irish folk music come from an ensemble of traditional Irish instruments, so let’s check them out and see what’s what. 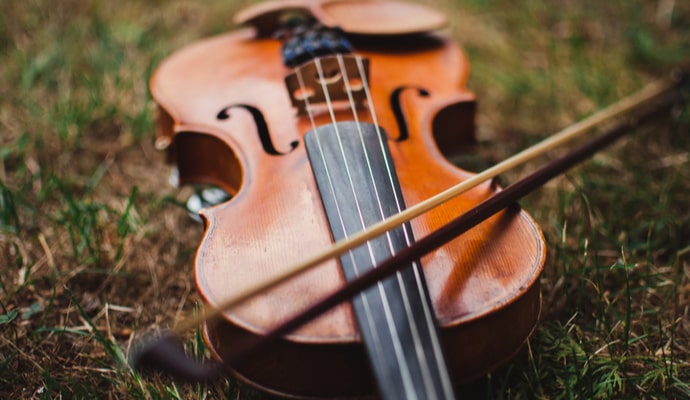 Photo by Olha Horshcharuk on shutterstock.com

The fiddle is arguably the most popular Irish instrument for banging out some Irish traditional music. Many Irish trad songs feature fiddle music as it’s one of the fundamental Irish instruments in folk music.

If you’re not familiar with this traditional Irish instrument, it’s a type of violin, but how it is played is entirely different and varies from region to region.

For example, Irish traditional music in Sligo that features a fiddle is played very quickly and flows with slurred bow strokes and very little vibrato.

While in Donegal, the fiddle playing reflects foot-tapping rhythms and a distinctive staccato sound.

In East Galway, fiddlers emphasise the melody while in the upland region of Sliabh Luachra (Munster), fiddlers favour polkas, slides and reels with a unique style of bowing.

2. The Harp (one of the most iconic Irish instruments) 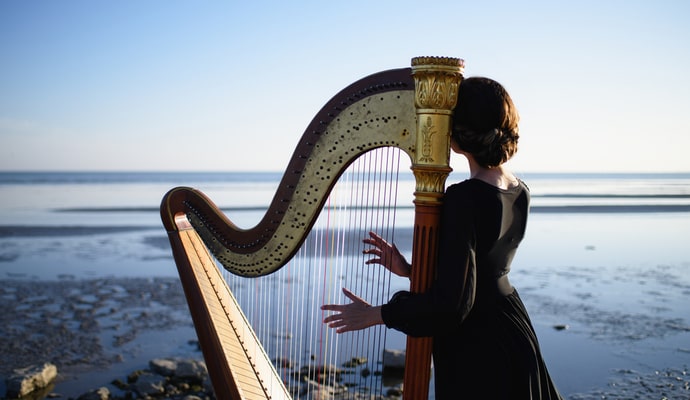 Celtic harps are centuries-old traditional Irish instruments and legend has it that the first harp was owned by Chief Dagda from Tuatha dé Danann.

Apparently, he could make his audience weep, smile or even been lulled to sleep depending on his style, so the harp became known as the dispenser of Sorrow, Gladness and Rest.

The original Irish harp was smaller, carved out of bogwood and did not have a foot pedal as seen in modern instruments.  he word “harp’ means “to pluck” and original harps had wire strings rather than gut.

This beautiful Irish musical instrument is traditionally played at weddings and funerals and has a special place in Irish culture. 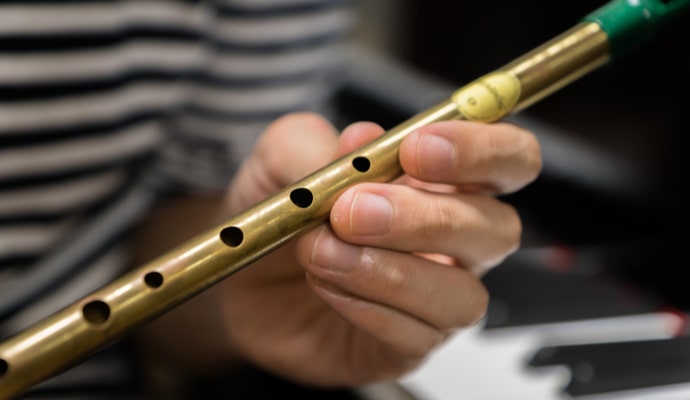 Photo by Uskarp on shutterstock.com

Dating back to the 12th century, the tin whistle or Penny Whistle sounds shrill and high-pitched (think Geraldine Cotter) while the low whistle is larger and produces a deeper, more mellow sound. T

he flute is a classical orchestral instrument with a similar tone to the low whistle. It is played by blowing across the mouthpiece rather than into it and creates a soft velvety tone. 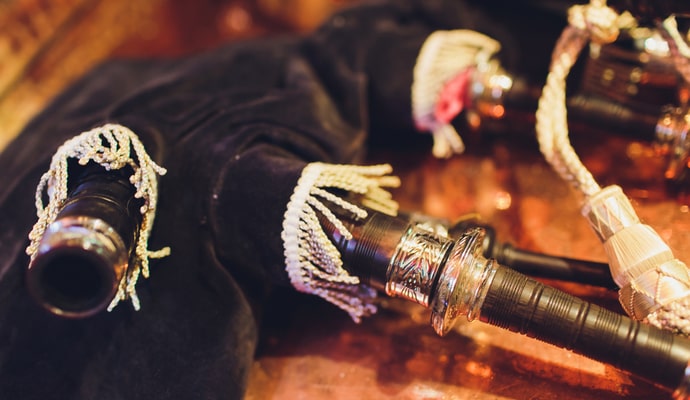 Photo by The Uilleann Pipes on shutterstock.com

One of the lesser-known Irish instruments for playing Irish traditional music, the Uilleann Pipes, similar to Scottish bagpipes, are Ireland’s national pipes.

“Uilleann” means “pipes of the elbow” as the bag is inflated using bellows strapped around the player’s waist and pumped using the arm.

It saves all that puffing and blowing as with bagpipes and delivers a drier air to the reed. The tube with finger holes is known as the chanter and is used to create the notes on these traditional Irish instruments. 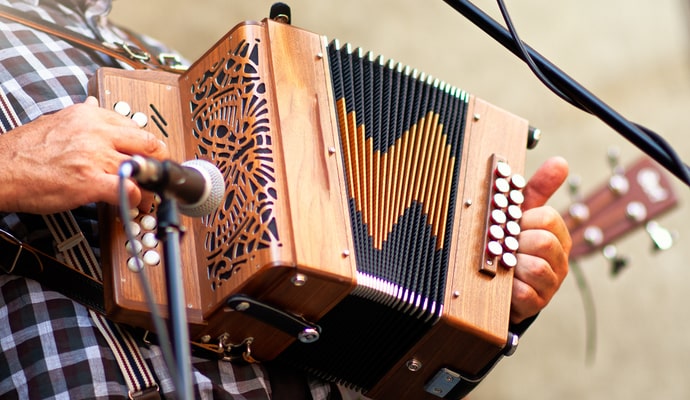 Photo by michelangeloop on shutterstock.com

The accordion and the concertina are popular Irish instruments commonly used for impromptu music session and accompanying sing-alongs.

Nicknamed a “squeezebox” the accordion hangs from the shoulders by straps. It has bellows operated by pulling and squeezing the box while the left-hand plays bass notes on buttons and the right-hand plays the main tune on a keyboard.

Concertinas are the smaller member of the squeezebox family, often hexagonal with buttons at both ends of the bellows instead of a keyboard.

6. The Banjo (one of the most popular Irish musical instruments) 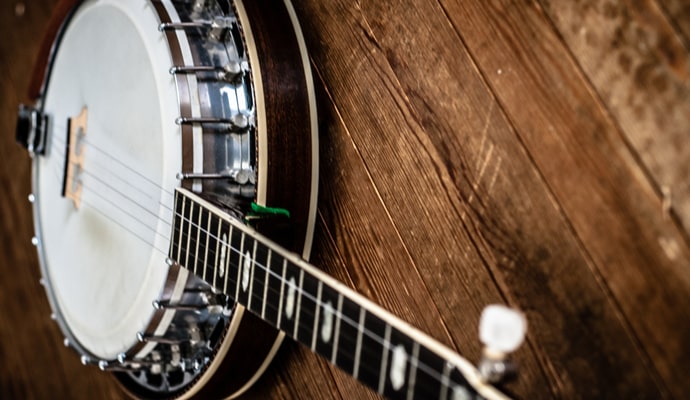 Photo by Tito Slack on shutterstock.com

The banjo is one of my favourite Irish instruments for playing Irish traditional music and you’ll see it feature in many of the tunes in our guide to the best Irish drinking songs.

Popular with many Irish bands, the stringed banjo has a round box cavity and a neck with five strings which are tuned and adjusted by nuts.

The tenor banjo is a relative newcomer to Irish folk music as pre-1960 it rarely featured, but things move on.

Banjos can be strummed, picked with fingers or played with a plectrum and most commonly play single-note melodies in Irish music. 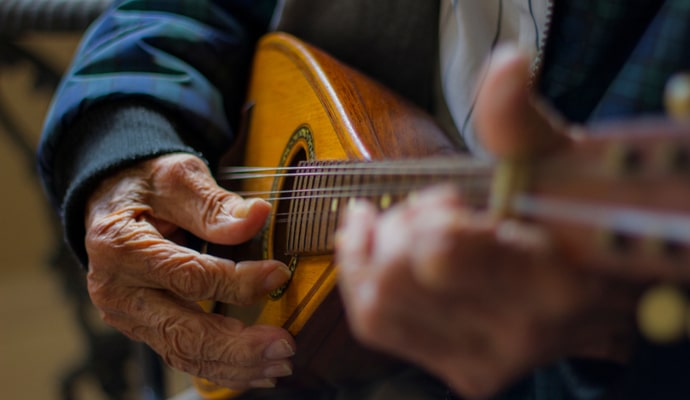 Photo by PauloAlmeidaPhotography on shutterstock.com

The mandolin is another popular traditional Irish music instruments. The Celtic mandolin is a beautiful instrument shaped like an onion with a solid wood back (usually rosewood or mahogany) which is flat or gently curved.

Smaller than a guitar, Celtic mandolins may have round or oval sound holes and the four double sets of strings are played with a plectrum.

Part of the lute family, mandolins rarely featured as Irish music instruments until the early 70s when they were played by the Dubliners, Horslips, Lindisfarne and other formative bands. 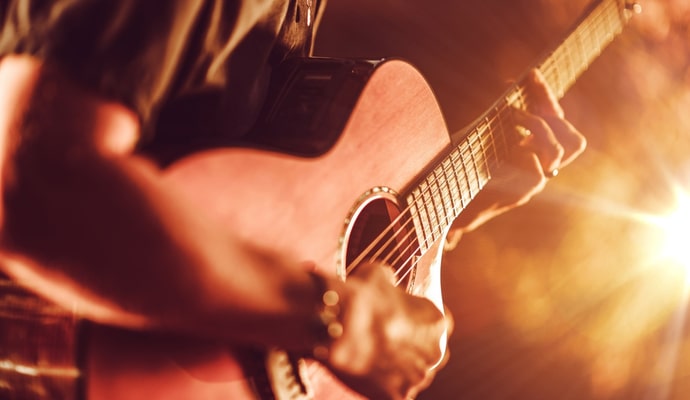 Photo by Virrage Images on shutterstock.com

Acoustic guitars are the perfect Irish instruments for jigs, slips and reels creating a foot-tapping rhythm that’s infectious, which is why they feature in many of the best Irish songs.

The guitar is relatively easy to teach yourself to play using chords created by holding down the four strings in certain formations while strumming the soundbox with fingers or a plectrum moving the forearm.

Guitars can also be flat-picked. They are ideal for folk music but playing jigs on guitar can be a little more difficult requiring irregular strumming. 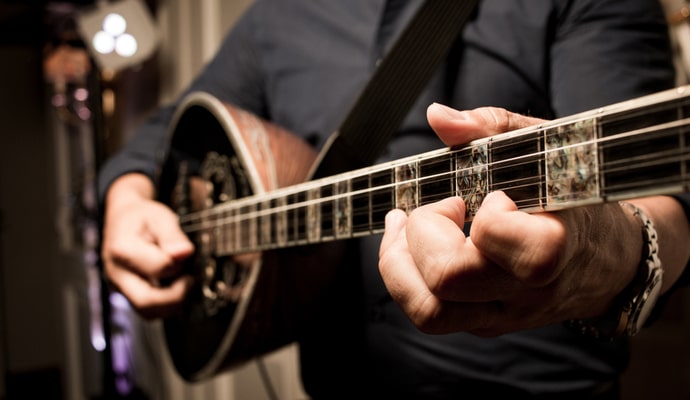 Photo by Tim.Turner on shutterstock.com

The Bouzouki is another of the lesser-known Irish instruments for playing Irish traditional music and it was adapted from the Greek bouzouki.

The Irish bouzouki is not a traditional Irish musical instrument as it was only introduced to the Irish music scene by Johnny Moynihan (Sweeney’s men) in the mid-1960s.

In the early 70s, Irish musician Dónal Lunny replaced two-octave strings with unison strings and later commissioned the first bouzouki with these specifications.

Now an integral part of Irish folk music, it is mainly used for chordal accompaniment to the flute or fiddle. You’ll see this featured in many tunes in our guide to the best Irish love songs. 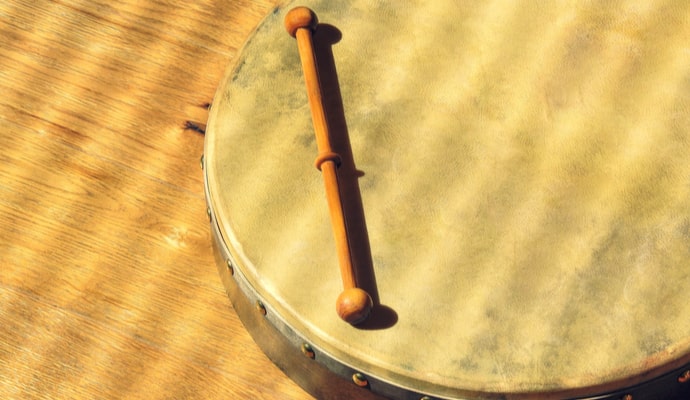 The Bodhrán Drum has been around for centuries and is one of the most popular Irish percussion instruments.

Measuring between 25 and 65cm diameter and played in an upright position, it is covered with animal skin (usually goatskin) on one side and on the other side the hand controls the pitch and timbre.

Popular in Irish rebel songs, the deep tone of the Bodhrán Drum complements other Irish instruments such as the fiddle, harp and guitar. The name “Bodhrán” means dull and reflects the hollow sound of the drum. 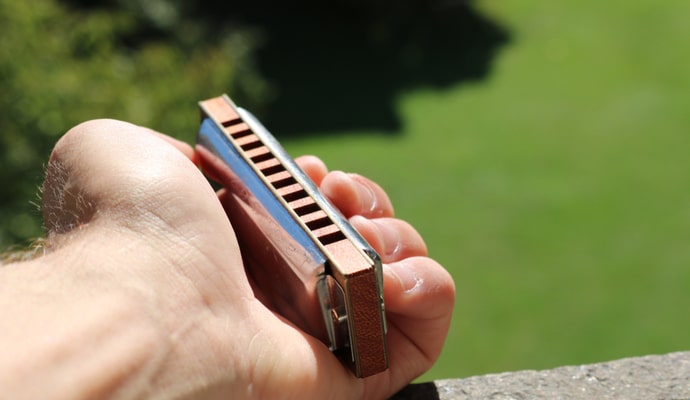 Photo by Jojo Photos on shutterstock.com

The Irish harmonica is a type of mouth organ commonly played in County Wexford but popular as Irish music instruments throughout Ireland.

You don’t need formal lessons to learn to play the harmonica, just plenty of practice and a little trial and error.

The handheld instrument commonly has 10 holes and a little practice in breath control and lip training will soon produce some rewarding harmony. Harmonicas have long been popular traditional Irish instruments in slow airs and faster dance tunes.

Traditional Irish music instruments: Which ones have we missed?

I’ve no doubt that there are some other Irish musical instruments that need to be added to the guide above. If you have one to recommend, let me know in the comments section.

Early In Riverdance there is a solo by a man playing an instrument that looks like an oboe but sounds like a flute.

Can you tell me what it is?

@suzanne, I am not sure of which performance you are referring to, but I found this one:

The fiddle plays a fair solo, but there is a man also playing a distinct line with an Irish tin whistle at first and then with the uilleann pipes. He does not play it as a solo in this performance, though.

Hope this helps. Perhaps share the video link as well. Then we can have a better look

Gillian...nice work! However, in the lovely photo of the woman and harp looking out to sea, the harp is actually reversed to the way it's played. Seated and with the "straight" side out. Some oversimplifications in the accordion (or accordian?...both used. Continuity?!) "hanging from the shoulders" when the instrument is, moreover, "secured" to the body with the straps ergonomically to have a stable, unmoving instrument...what with all of thst "squeezing"! If indeed it was "hanging," Houston, we'd have a problem!