Which makes it a popular option for those in search of day trips from Belfast that aren’t too far from the city.

The gardens here are a joy to ramble around and the area boasts and absolute wealth of history (it’s also free to visit!).

Below, you’ll discover everything from the history of Antrim Castle Garden to it’s opening hours. Dive on in! 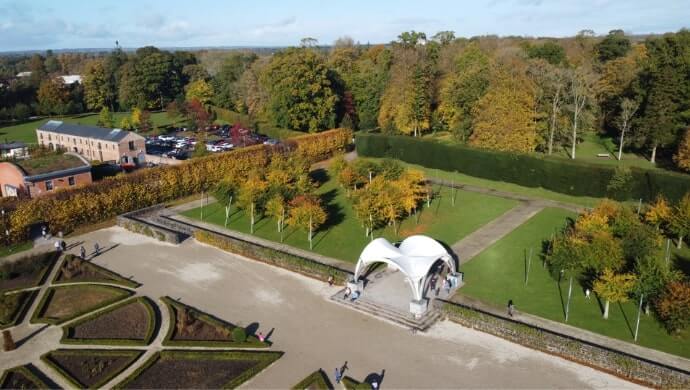 Although a visit to Antrim Castle Gardens is fairly straightforward, there are a few need-to-knows that’ll make your visit that bit more enjoyable.

The gardens are open all year round. On Mondays, Wednesdays and Fridays, you can visit between 9am and 5pm, on Tuesdays and Thursdays it is 9am until 9,30pm and on Saturdays and Sundays, opening hours are 10am to 5pm. The gardens are closed for the bank holidays on 1 January and 25 and 26 December.

Admission is free, making this a budget-friendly holiday pick. There is limited car parking on site at Antrim Castle Gardens, although there are several places to park nearby (see this map for parking spots).

Worry that all that marveling at beautiful scenery might trigger hunger pangs? Fear not, there is an onsite coffee shop at Clotworthy House which is open every day, serving up quality refreshments, teas, coffees, soft drinks, snacks and meals.

The history of Antrim Castle and its fabulous Gardens

Antrim Castle on the banks of the Sixmilewater River was built in stages between 1613 and 1622, destroyed by a fire in 1922 and finally demolished in the 1970s. A slightly raised grass platform is all that remains, along with a 19th century Italian stair tower and a gatehouse.

The castle was originally built by the English settler, Sir Hugh Clotworthy, in 1613, and later enlarged by his son John in 1662. His daughter and heiress, Mary, married Sir John Skeffington, 4th Baronet who became the 2nd Viscount Massereene, and the estate and title then passed to the latter family.

In the 1680s, the Jacobite General Richard Hamilton raided the castle and his men looted Viscount Massereene’s silverware and furniture up to a value of £3,000, a huge sum at the time.

The castle was used for political conferences, such as in 1806 when the Right Hon. John Foster, the last Speaker of the Irish House, was reported to have spoken in the Oak Room of the castle.

Burnt to the ground

A grand ball took place on 28 October 1922. It was during the event that the castle caught fire and was destroyed (a similar fate awaited several castles in Northern Ireland).

While much of the evidence indicated that the fire was the result of an IRA arson attack, the verdict was not conclusive, and an insurance claim could not be paid out. The castle remained a ruin until it was demolished in 1970.

One of the reasons that a visit to Antrim Castle is one of the most popular things to do in Northern Ireland is due to the sheer volume of things there is to do there.

Below, you’ll find info on everything from walks and historical sites to interesting castle features and the tour. 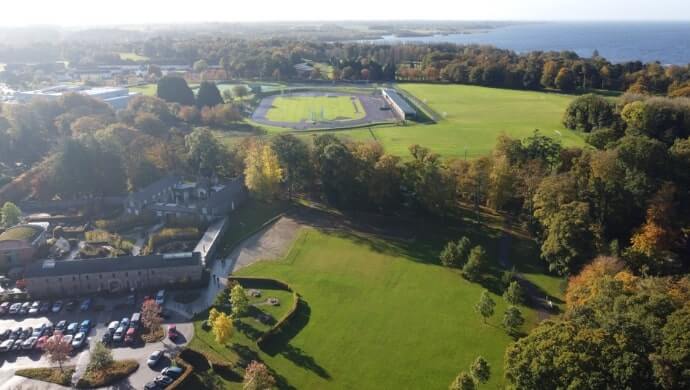 Clotworthy House is a fine stable block and coach house built in the Jacobean revival style round about 1843 by the 10th Viscount. It is believed to have been designed by Charles Lanyon, who would later design iconic Belfast buildings, such as Queen’s University.

After the house was acquired by the council, it became an arts centre and these days functions as a visitor centre.

Antrim Castle Gardens’ design is based on the geometrical construction of four lines that run parallel north through a ‘wilderness’ – the Lime Avenue one of them. There are notable water features to see, such as the long, narrow canal, an oval pond and another small pond surrounded by yew trees. The avenue leads the eye to notable landmarks, such as some of the area’s churches and Shane’s Castle. 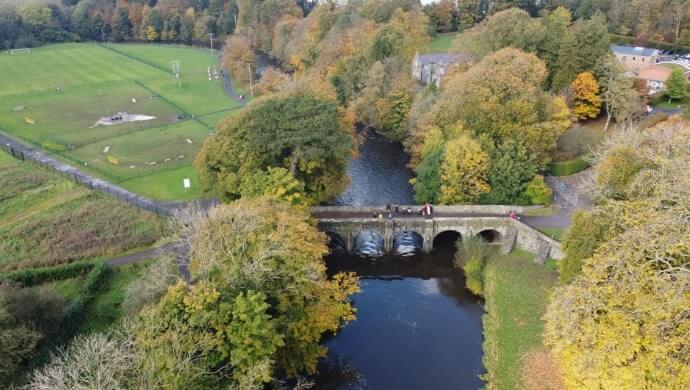 Deerpark Bridge is built from basalt rubble and is thought to be one of the most picturesque features of the gardens. Built more than 300 years ago, it was the only link between the gardens and the landscaped park beyond. It is called the Deerpark Bridge because the park originally supplied venison from the deer in the park to the household.

French styles were very influential among 17th century landowners and later an Anglo-Dutch style, reflecting the arrival of a Dutch monarch to the English throne. The lower canal was constructed in the early 18th century, while the upper canal was added in the 19th century.

The Long Canal has a ghost story connected to it. A phantom coach is said to descend into the depths of the Long Canal on the night of 31 May every year, sinking to the bottom of the waters. It is thought to be the enactment of an event that took place in the 18th century, when a drunk coachman steered the coach into the canal waters, killing everyone in it. 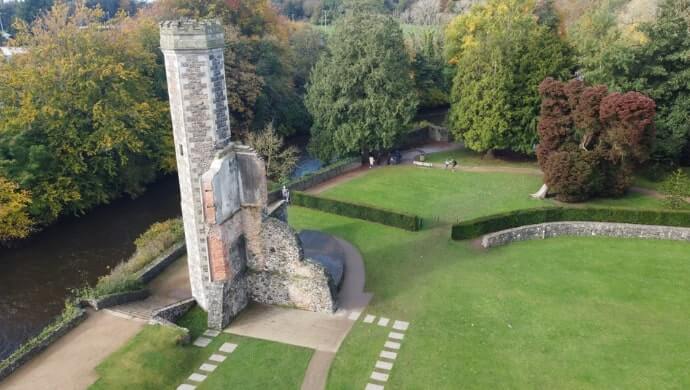 Antrim Castle was destroyed by fire in 1922 and demolished in 1970. A line of stones set around the lawn mark where the building used to be. Old photos and paintings show a magnificent building

The well-preserved motte is close to the eastern boundary of the gardens and was built in the late 12th century by the Earl of Ulster John de Courcy, or one of his followers and is said to be one of the finest in the country. When the Castle of Antrim passed to the Crown in 1210, there are accounts of knights, armed archers and foot soldiers in place there.

7. Lady Marian and the Wolfhound

Lady Marion Langford married Sir Hugh Clotworthy in 1607. Shortly after her marriage, she was walking from Antrim Castle to the shores of Lough Neagh when she heard something growl behind her, turned and saw a large wolf, and promptly fainted.

A wolfhound appeared and fought the wolf. She awoke to find the wolf dead and the wounded wolfhound lying next to her, licking her hand. She took the wolfhound back to the castle and tended to its wounds, but the animal vanished shortly afterwards.

Some years later, the wardens of the castle heard the deep baying of a wolfhound, lit a beacon fire and saw their enemies gathering below. A single canon shot repelled the attack, but the mysterious hound had alerted them to the danger.

Upon wakening the next day, the castle’s occupants discovered the wolfhound had been turned to stone, and was in place on an elevated position on a castle turret.

Things to do near Antrim Castle Gardens

One of the beauties of Antrim Castle is that it’s a short spin away from many of the best places to visit in Belfast. 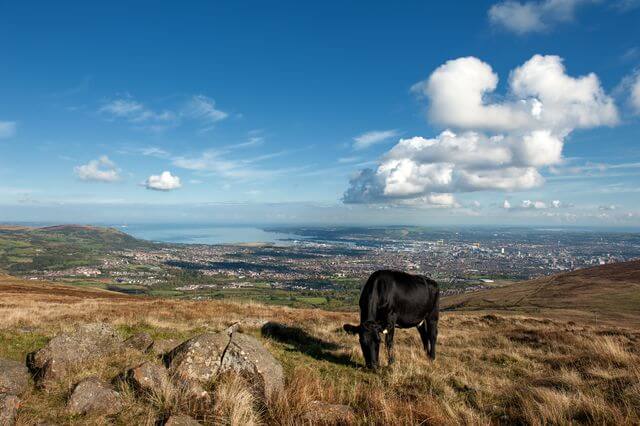 The Divis and Black Mountain are the highest points of the Belfast Hills. Divis or Dubhais means ‘black ridge’ and refers to the dark basalt bedrock. As well as amazing views, there is plenty of wildlife to see and archaeological remains. 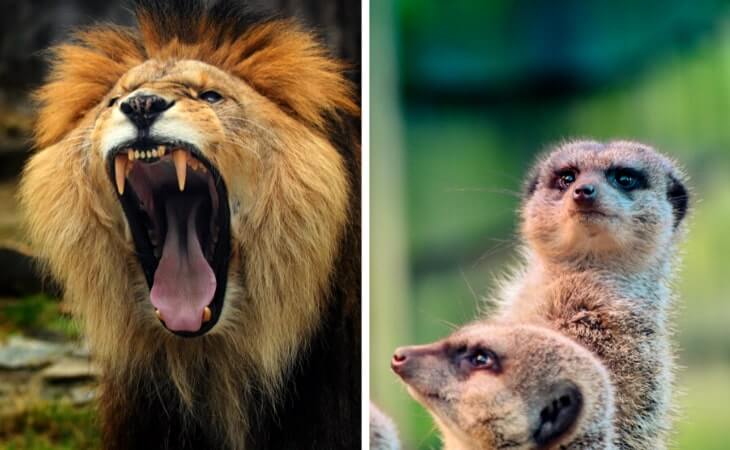 Belfast Zoo is home to more than 120 different species of animals, many of which are endangered or extinct in the wild and its plays an important part in protecting species from extinction. This is one of the most popular things to do in Belfast for kids for good reason! 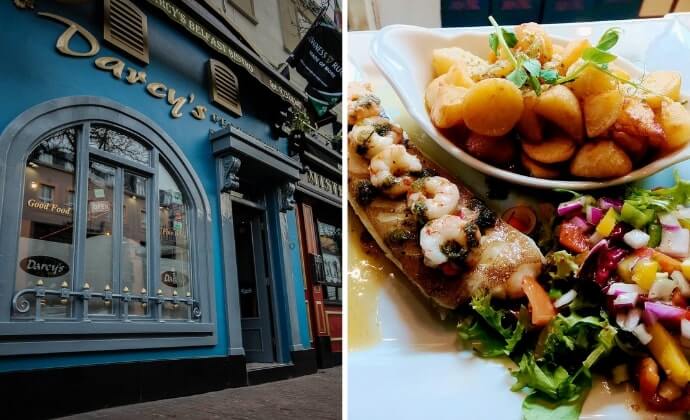 There’s an endless number of excellent restaurants in Belfast to drop into. From brunch (the regular kind) and bottomless brunch to breakfast and more, there’s plenty to choose from.

FAQs about visiting the Castle Gardens in Antrim

We’ve had a lot of questions over the years asking about everything from what are Antrim Castle Gardens like at Christmas to what are the opening hours.

Are Antrim Castle Gardens worth visiting?

Yes! The gardens are home to loads of things to do along with heaps of history (there’s even a ghost!) and a great spot for a bit of lunch.

How long is Antrim Castle Gardens?

If you fancy heading for a walk, there’s a roughly 1 mile looped walk of the gardens you can head off on. Ask the staff on-site if you’re unsure of the route.

When are the Castle Gardens in Antrim open?