There are plenty of castles in Kerry to have a nosey around, if you’re a fan of Irish history.

The mighty Kingdom of Kerry is home to some of the most popular castles in Ireland, and the vast majority of them are easily accessible.

In the guide below, you’ll discover 11 Kerry castles, ranging from ruins to fancy castle hotels, that are worth a visit.

The best castles in Kerry

First up is arguably the best known of the many castles in Kerry. I’m talking, of course, about Ross Castle in Killarney.

The 15th century tower fortress is set on the edge of the lower lake in Killarney National Park, where you can also take a boat trip to Lord Brandon’s Cottage for even more exploring.

The castle was built by O’Donoghue Mor, a powerful head chieftain (a man of many magical legends) and it was the last stronghold in Munster to hold out against Cromwellian forces, eventually taken in 1652 by General Ludlow.

The castle is open to the public during the summer months with admission for an adult costing €5 (prices may change). 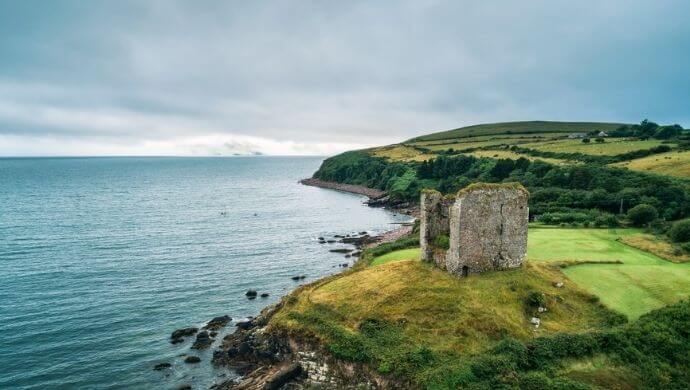 This 16th century castle is one of three built by the Fitzgerald clan on the Dingle Peninsula. The ruins are made up of a rectangular tower house constructed from sandstone blocks laid in a strong mortar.

Minard Castle sits proudly on a hill that overlooks a beautiful little bay with stunning views across the Atlantic Ocean.

The castle was built as a stronghold and a resilient one at that, when Cromwell’s Army tried detonating charges at each corner of the castle back in 1650, they failed miserably.

This is one of the lesser-known castles in Kerry, but it’s worth visiting, especially if you’re visiting nearby Inch Beach.

This 15th century four-storey tower house was built by the FitzGeralds, and is known as one of the few fortified structures preserved on the Dingle Peninsula. The tower has a vaulted ceiling on the 4th floor and was originally accessed on the 1st floor.

This now Irish Heritage site has been extensively restored with a new rectangular doorway added in the north wall. In the east wall is a mural stairway that rises up towards the other floors.

The castle is only 1 km (0.62) from Gallarus Oratory, a 12th century Romanesque church, thought to be used as a shelter for pilgrims or foreigners. 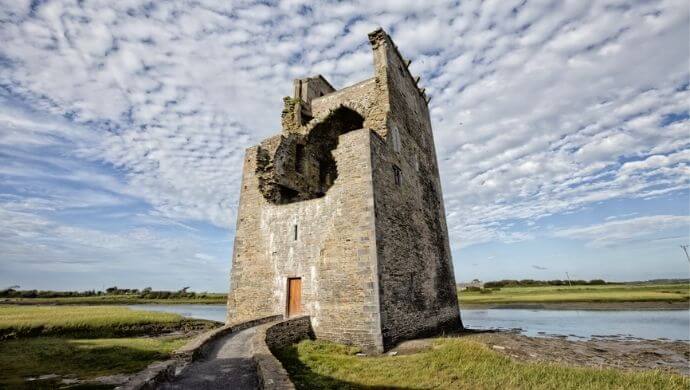 Located just 2 miles from Ballylongford, this 15th century tower house was constructed with thin pieces of limestone by Conor Liath O’ Connor, the main chieftain and baron of the area.

The 5-storey castle has vaults over the second and fourth storeys with an unusual wide spiral staircase of 104 steps that rise on one corner of the tower, leading to the battlements.

There was also a siege here during the Desmond wars in 1580, after 2 days the castle was breached and all occupants, 19 Spanish and 50 Irish, were brutally massacred. Opposite the castle is a medieval church, which was also built in the same style as the castle. 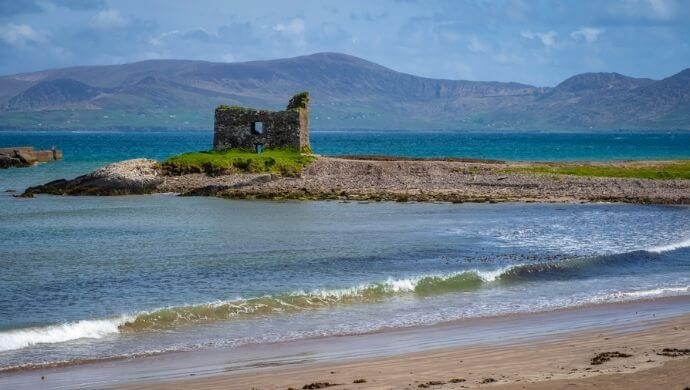 This 16th tower house was built by McCarthy Mor, firstly to protect the bay from pirates and secondly, to charge a tariff on any incoming trade ships.

Many of these tower houses were built around Cork and Kerry coasts by the McCarthy Mor family. Ballinskelligs Castle is situated on an isthmus which leads out into Ballinskelligs bay.

There are a few defensive elements to the castle’s architecture such as a battered base, narrow window openings and a murder hole that made it a resilient stronghold. It’s surreal to think that the castle was once three storeys tall, with the walls around 2m in thickness. 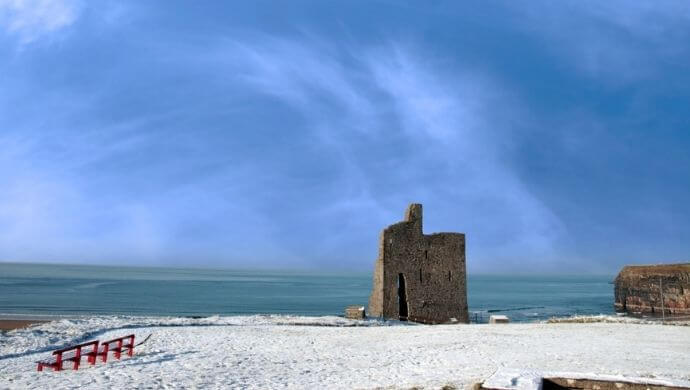 It is believed that Ballybunion Castle was constructed in the early 1500s by the Geraldines and was acquired by the Bonyon family in 1582 who acted as caretakers to the building.

Willian og Bonyon had the castle and land confiscated due to his active role in the Desmond rebellion in 1583. During the Desmond wards, the castle was destroyed and all that remains is the east wall.

Since 1923, the castle has been under the care of the Office of Public Works. In 1998, the castle was hit by lightning, destroying the upper part of the tower.

The ruins now serve as a memorial to the resilient Bonyons, with the coastal town of Ballybunion deriving its name from the family. 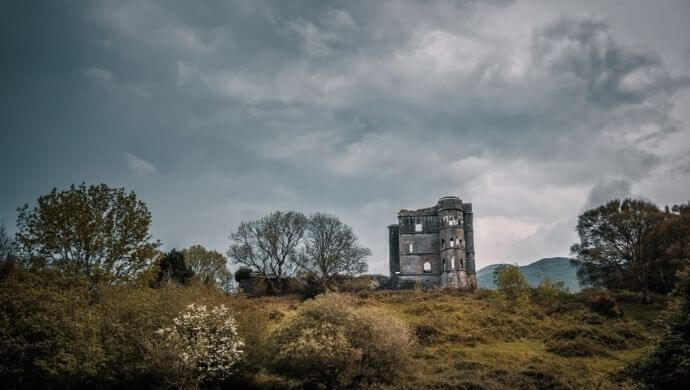 Next up is another of the many castles in Kerry that tends to get overlooked by those exploring the county.

The ruins of this castle are situated on the outskirts of Glenbeigh village. The castellated mansion was built in 18687 for Charles Allanson-Winn, 4th Baron headley.

Money from the castle came from the rents of tenants on the Baron’s estate but as construction continued, the cost increased too and so rents were increased. This resulted in hundreds of tenants unable to pay and cruelly evicted from their homes.

Not long after the castle was built, the Baron became insolvent and left Glenbeigh completely.

During WW1, the castle and grounds were used as a training centre for the British Military which led to Republican forces burning the castle to the ground in 1921, never to be rebuilt. 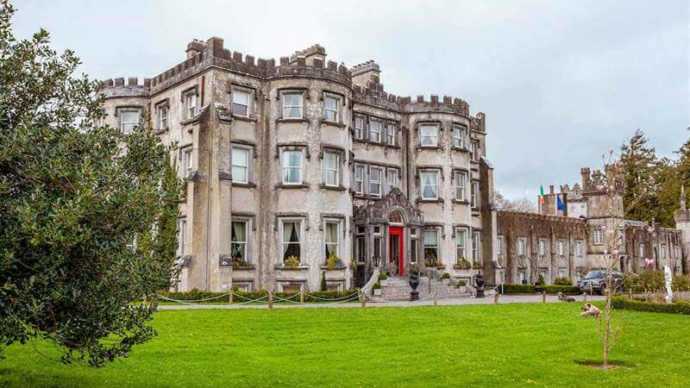 Ballyseede Castle is one of our favourite hotels in Kerry and it’s arguably one of the best Irish castle hotels value wise.

This family-run castle luxurious hotel dates as far back as the 1590s and even comes with a loveable Irish wolfhound called Mr Higgins.

The castle is a huge three-story block over a basement full of historical artifacts wherever you look. The front entrance has two curved bows and the south side is another bow with a battlemented parapet.

The lobby has a unique wooden bifurcating staircase made from fine oak. The library Bar has a carved oak chimney piece over-mantle dating back to 1627.

The banqueting hall is one of the most impressive aspect of the hotel, where huge feasts and entertainment took place.

Constructed in 1810, this once grand mansion was the home to the Crosbie family, who lorded it over Kerry for years but this wasn’t too last.

In 1840, the castle was burnt down by accident and on the 27th May 1921, it was destroyed yet again as part of the Troubles.

It is said that many household goods were taken from the castle and given to the community before locals set it on fire. There is also believed to be a ghost floating around and hidden treasure somewhere in the castle.

Today the castle is situated inside a golf course (so two reasons to visit) and the Ballyheigue beach is only a 6 minute walk to reach. 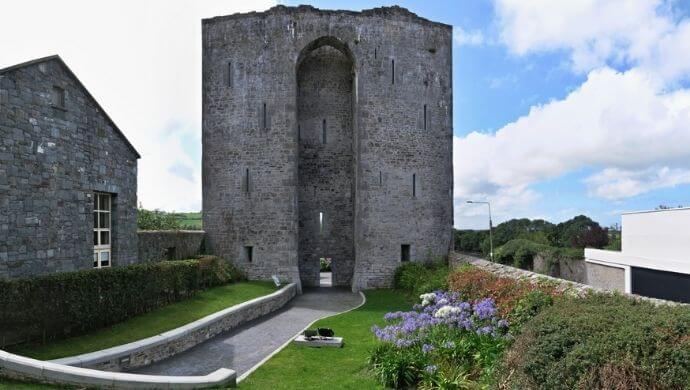 This 16th century stronghold sits on an elevation that offers wonderful views overlooking the River Feale. While only half of the building is still standing, it is one of Kerry’s greatest examples of Anglo-Norman architecture.

Only two of the original four square towers still stands at over 15 metres high. During the First Desmond Rebellion in 1569, Listowel was the last bastion against the forces of Queen Elizabeth.

The castle’s garrison managed to hold out for an impressive 28 days of siege before being overpowered by Sir Charles Wilmot. Days after the siege, Wilmot executed all soldiers who occupied the castle.

This 15th century rectangular tower house was built on the remains of an ancient ring fort (which was built sometime in the 7th or 8th century AD).

Once a formidable stronghold of the Knights of Kerry who belonged to the Geraldine (FitzGerald) family, The FitzGeralds had castles in Dingle town and Gladine but no longer exist.

Local tradition claims that this piece of land was the last in Ireland to be held by the Vikings which was why it was so easily defended. In 1602, the castle was taken by Sir Charles Wilmot but was ruined during the Cromwellian conquest some decades later.

FAQs about the different Kerry castles

We’ve had a lot of questions over the years asking about everything from which castles in Kerry are most worth visiting to which ones can you stay in.

Which castles in Kerry are most worth a visit?

This will change depending on who you ask but, in our opinion, Ross Castle in Killarney and Minard Castle in Dingle are most worth visiting, as they’re close to many other things to see and do.

Are there any Kerry castles where you can spend the night?

Yes. Ballyseede Castle is a fully functional hotel where you can spend a night or two. The reviews online are excellent and it’s near plenty of other attractions.

Are there any haunted castles in Kerry?

There are ghost stories associated withy several castles in Kerry, the most notable of which are Ballyseede’s resident ghost and Ross Castle, where it’s said that a Black Baron haunts.

Do you have any information on Richard Pierce Mahony’s Coss Castle next to Dromore Castle in County Kerry?