I’ve spent a good 10 or 11 weekends in Dingle in Kerry over the years, and the place never gets old.

There’s an almost endless number of things to do in Dingle, which means it’s the perfect place for a weekend of adventure (and pints – but more on that in a minute!).

In the guide below, you’ll discover everything you need to know if you’re thinking about making Dingle your base for a few nights. 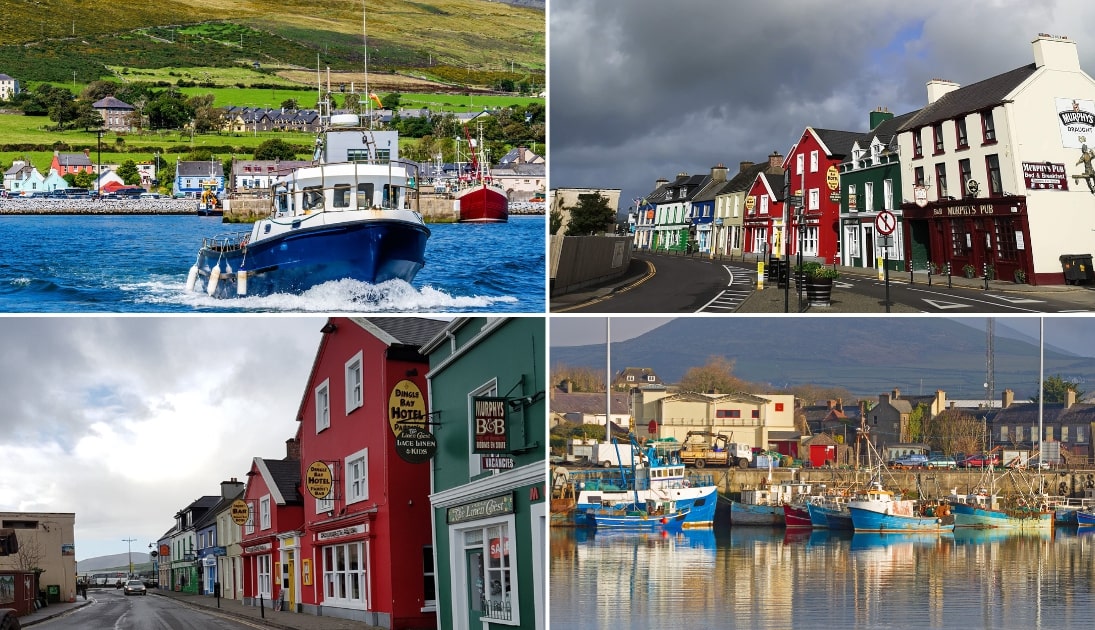 Although a visit to Dingle in Kerry is nice and straightforward, there are a few need-to-knows that’ll make your visit that bit more enjoyable.

Dingle Town is situated, unsurprisingly enough, on the Dingle Peninsula, which stretches 71 Km into the Atlantic on the Southwest coast of Ireland.

The peninsula’s spine is formed by a range of mountains, running from the Slieve Mish range to Conor Pass and Mount Brandon (which is Ireland’s second highest peak).The glorious coastline is made-up of several dramatic headlands broken by sandy beaches.

3. A fine base for adventure

Dingle Town makes a great base to explore from. You can easily check into one of the various B&Bs in Dingle and then spend a day tackling Slea Head and another exploring the nearby Iveragh Peninsula (home to the Ring of Kerry).

A brief history of Dingle Town 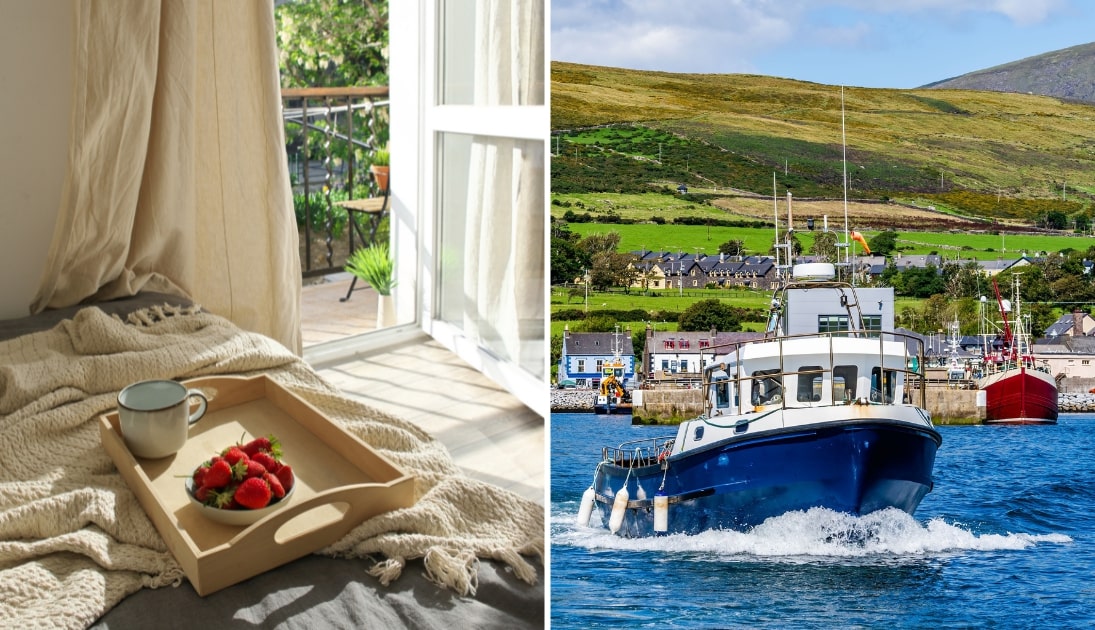 During the Norman invasion of Ireland, Dingle was developed as a port. By the 13th century, there were more goods being exported from Dingle than Limerick.

By the 16th century, Dingle was one of Ireland’s main trading ports, exporting fish and hides and importing wine. Many French and Spanish fishing fleets would use Dingle as a base.

Links between Spain and Dingle flourished due to trading, several houses in Dingle were even built in the Spanish fashion. Dingle was also an important embarkation port for  pilgrimages visiting the shrine of Saint James in Spain.

In 1969, a movie called “Ryan’s Daughter” was filmed near Dingle which showcased the beautiful scenery of the town and peninsula to the world, helping put Dingle on the map and kick-start tourism in the town.

Things to do in Dingle Ireland (and nearby)

So, we’re created an extensive guide on the many things to do in Dingle, that covers everything from hikes and walks to tours and scenic drives.

However, I’ll give you a quick overview of some of the most popular places to visit and things to do near Dingle in Kerry. 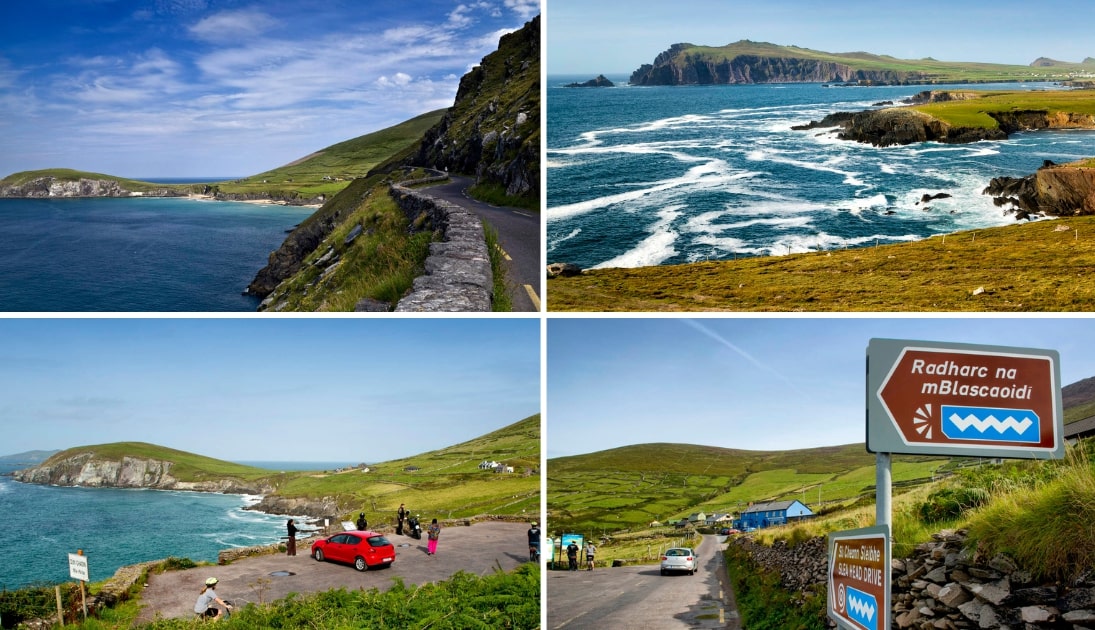 The circular Slea Head Drive, which also forms part of the Wild Atlantic Way, starts and ends in Dingle.

Clearly labelled by road signs, the scenic journey will take you through Irish speaking villages, historical sites, famous Hollywood locations and wonderful views of both the Blasket and the Skellig islands.

It’s most enjoyable when explored slowly over a few days or if you are tight for time, you should set aside a half-day. 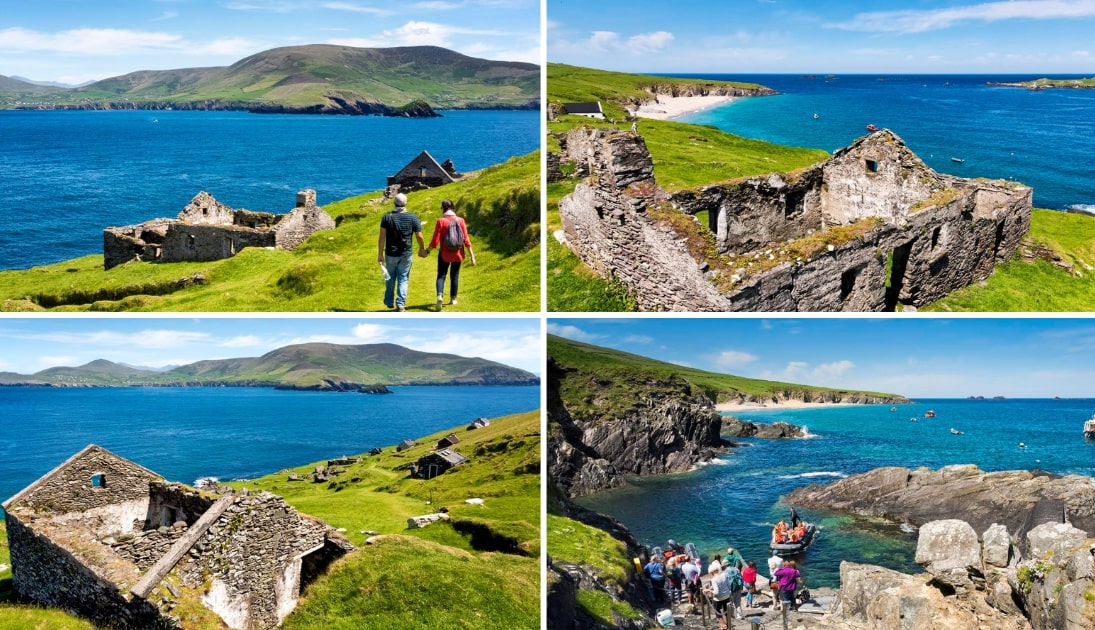 There are two islands near Dingle that attract and delight visitors: the Blasket Islands and the Skellig Islands.

The later tend to be the most popular, as the tours are harder to get onto since the islands shot to fame during the filming of Star Wars (here’s a guide on getting to the island).

The Blaskets are well-worth a visit and they’re often overlooked by many visiting the Dingle area. As you’ll see here, though, they pack a fine punch! 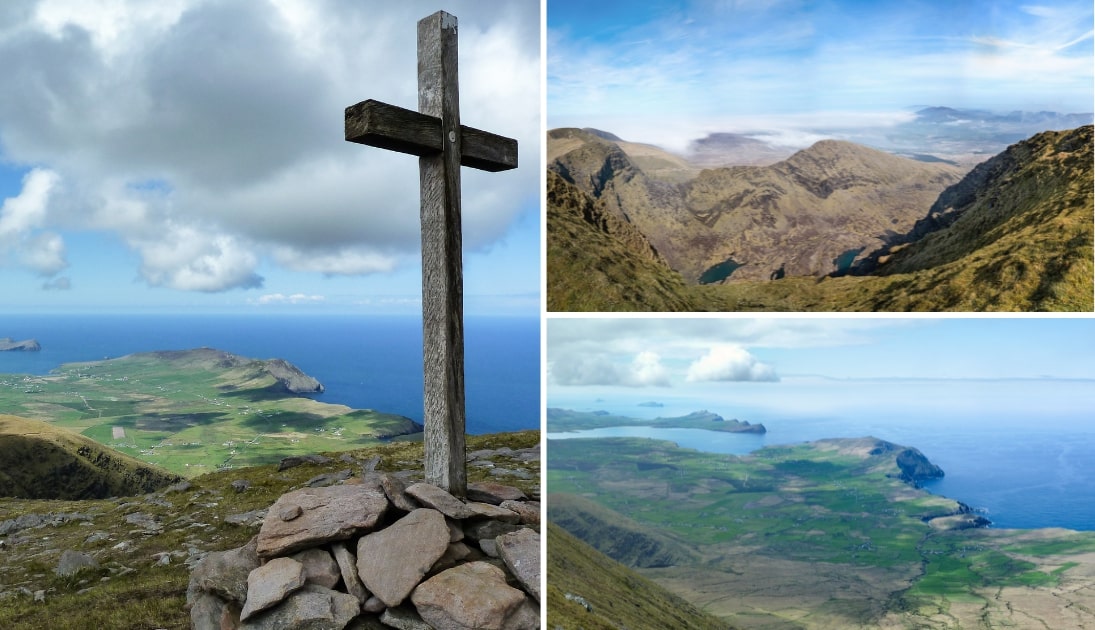 This 179km long Dingle Way hiking route starts and ends in Tralee and takes around 8 days to complete (so it’s broken into 8 sections for each day).

Luckily, you can join the trail at any number of points along its length and there are also a few shorter looped walks and mountain hikes off the main Dingle Way.

For the more experienced, there is the Mount Brandon hike, bringing you to the highest point in the Dingle Peninsula and takes 5-6 hours for the loop. 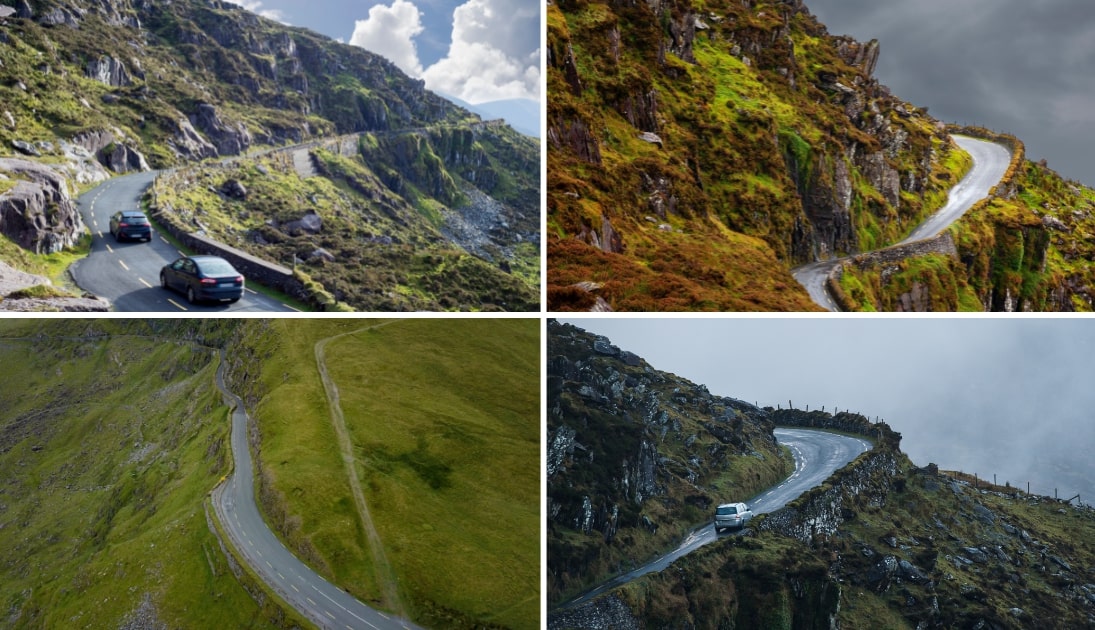 The area has plenty more to offer from the various beaches near Dingle and the different Dingle tours t0 Conor Pass (above), Coumeenoole Beach, Dunquin Pier and much much more.

The town is also a short spin from many of the best places to visit in Kerry, like Killarney National Park, Valentia Island and more. 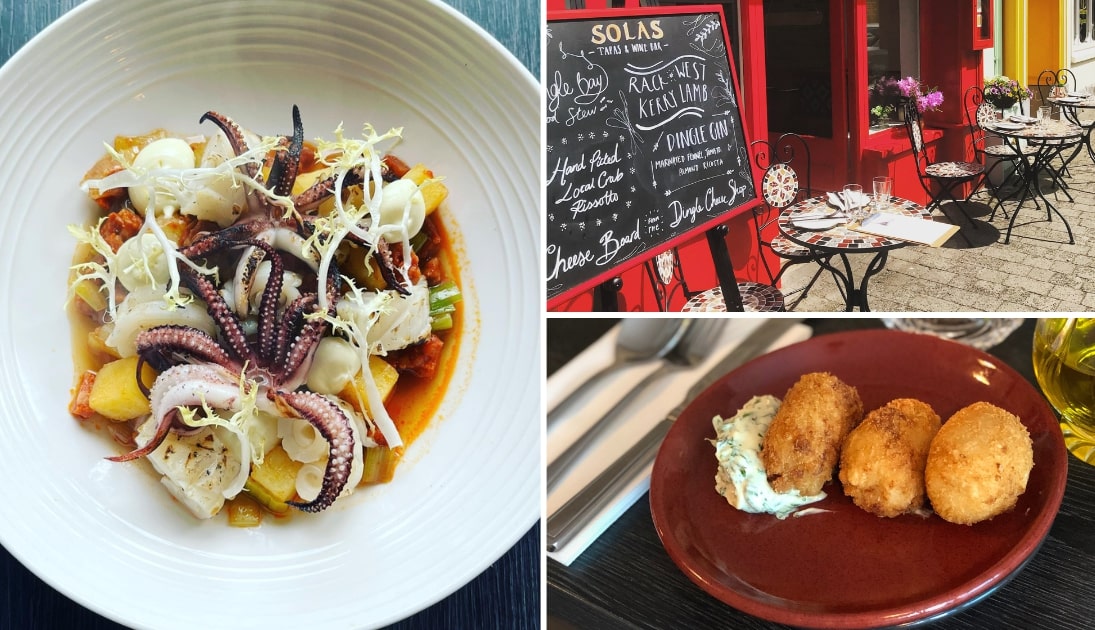 In our guide to the best restaurants in Dingle, you’ll find some places to eat that’ll make your belly very happy.

Here are a handful of our favourites from the guide (the Fish Box, in particular, is absolutely incredible!).

This family run restaurant dishes up fresh seafood straight from sea to plate (they own a trawler and the owner’s brother, Patrick, apparently catches the fish).

The boat can take 5-15 days at sea to make sure they get the best seafood. A lot of the dishes come with a seafood twist like a prawn burrito or monkfish goujons.

This seafood-only shack has been offering fresh fish and seafood delicatessen since 2001. It’s situated on the harbour so you can expect great views to go along with your fish dish.

The restaurant was also awarded Georgina Campbell’s Seafood Restaurant of the year in 2005 and can also be found in the Michelin guide for the last 15 years too.

While it’s not the most glamorous or glitzy in comparison to other restaurants in town, the food here is spectacularly good.

All seafood is locally sourced and freshly cooked, and the beef is from a local farmer. They also have a huge selection of local fish, from monkfish to haddock to hake to mackerel. 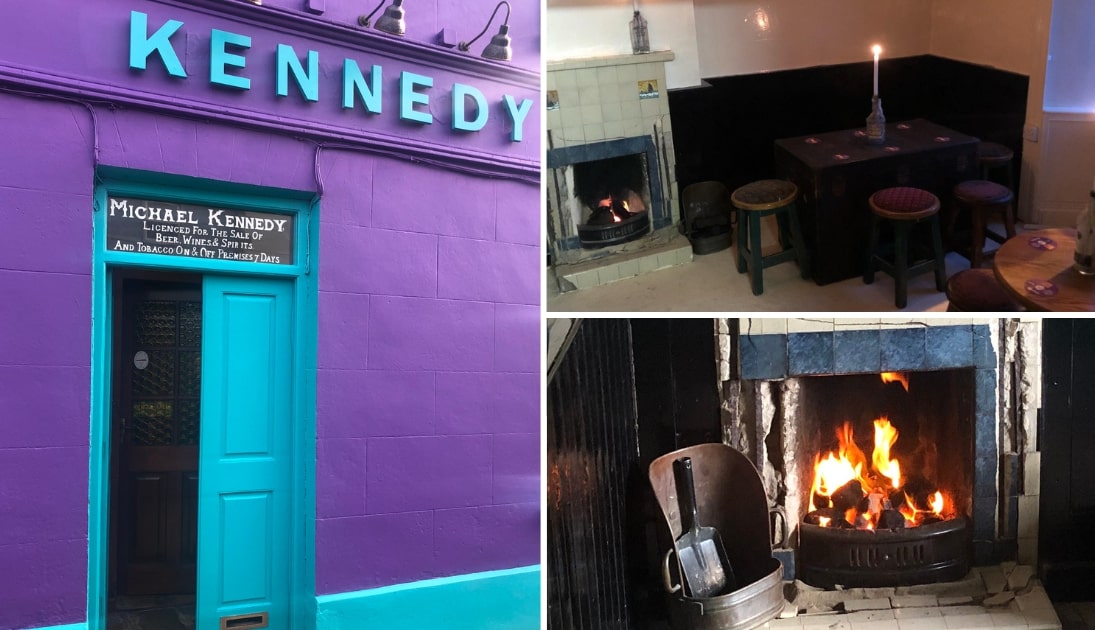 We created a guide to the best pubs in Dingle what feels like a lifetime ago now (4 years ago!), however it’s still as relevant now as it was then.

There’s some excellent pubs in Dingle, many of which host regular trad sessions. The best of the bunch, in my opinion, is Foxy John’s, but there’s some stiff competition.

This is a unique spot since it’s half an Irish and half a hardware store and bike hire. There are not many places in the world where you can have a pint of Guinness while there is tools and mousetraps around you. On hot summer days, this is the go-to for a bit of craft cider and there is live music on the weekend.

This pub has been pulling pints since 1899. One half of Dick Mac’s is where you will find beers and fine whiskeys while on the other side is a leather shop. Explore the adjoining rooms where the Mac Donnell family used to call home. There is also outdoor seating, artisan food trucks and a fantastic brewing facility available for tastings and tours.

John Benny’s got its pub license back in 1894 and has been run by the same family for three generations, the Long family. Michael Long was a collector of marine specimens, with some of his correspondence located in the Museum of Natural History in Dublin. The pub is also an excellent spot for local Irish cuisine and live trad sessions too. 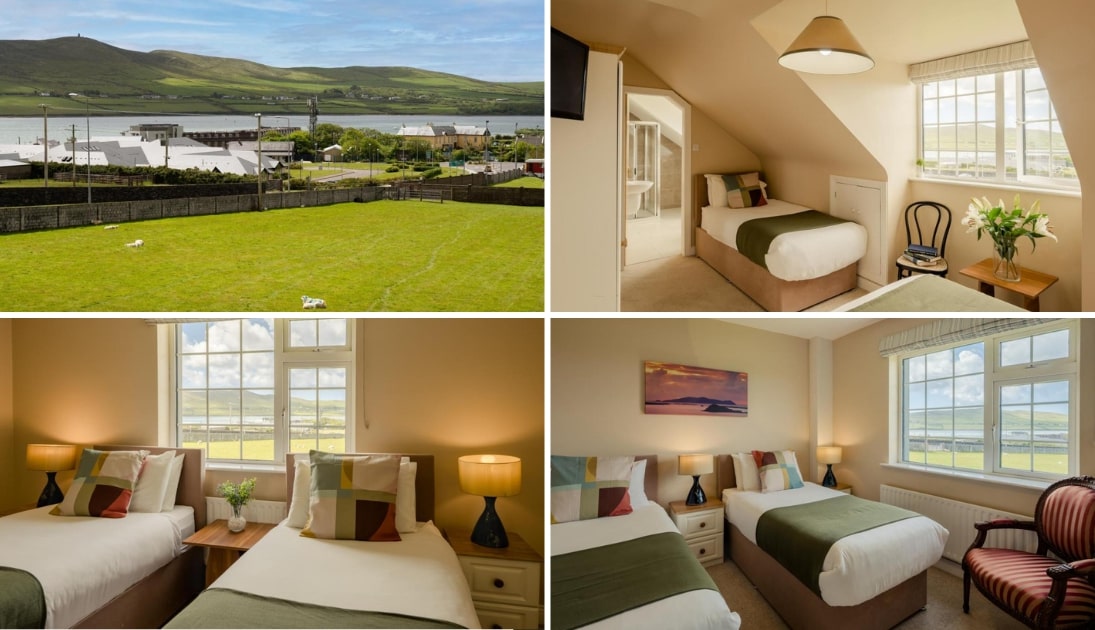 There’s a lot of different places to stay in Dingle in Kerry. For those of you that fancy staying in a hotel, you’re in luck – there are plenty to choose from.

You can discover the best of the bunch in our guide to the best hotels in Dingle. Here are a handful of our favourites.

The 4-star Dingle Skellig is only 200 m from Dingle Bay, a great spot for diving, swimming, sailing and fishing. You might even spot the wee legend Fungie or he will spot you.  The luxurious hotel comes with 3 pools, a restaurant (that serve some top notch seafood) and a gym. The spacious rooms are en suite and with a big satellite TV.

This intimate boutique hotel is located in the heart of Dingle and is also the oldest hotel in Dingle, dating as far back as the 1800s. Every corner of the hotel just oozes opulence. There are charming 52 rooms, spacious and designed with great attention to detail. They have also won a Georgina Campbell award for Best breakfast, though they also cater to anyone who prefers a bit of brunch.

Located in the town centre and right by the sea, this family-run hotel offers 25 spacious rooms, all en suite, and come with a tea/coffee making facilities and a TV. There is also a hip bar and restaurant that has a good selection of homemade breads, scones and pastries as well as Blasket Island Lobster (a must). Paudie’s Bar is where you can enjoy the evening and experience West Kerry music.

If you fancy trying some self-catering accommodation, there are plenty of Airbnbs in Dingle to choose from.

There’s also a tonne of great holiday homes and B&Bs in Dingle to choose from, like the sensational Pax Guesthouse.

FAQs about visiting the town of Dingle in Kerry

Since mentioning the Dingle Ireland in a guide to Kerry that we published several years ago, we’ve had hundreds of emails asking various things about Dingle in Kerry.

Where is Dingle Ireland?

Is Dingle worth visiting?

Yes. It can get fairly manic during the busy summer months, but the town makes a great base to explore from, with plenty to see and do nearby.