Several of the best Christmas markets in Ireland have confirmed that they’ll be back in 2022.

And, after the two very up-and-down years we’ve had, a bit of festive normality is more than welcome!

Large markets, like the Galway Christmas Markets, have dropped their dates as have some of the smaller Christmas markets Ireland has to offer, like the one in Wicklow.

In the guide below, you’ll find info on everything from when each of the markets kicks-off to which ones we’re still waiting for info on.

The best Christmas Markets Ireland in 2022 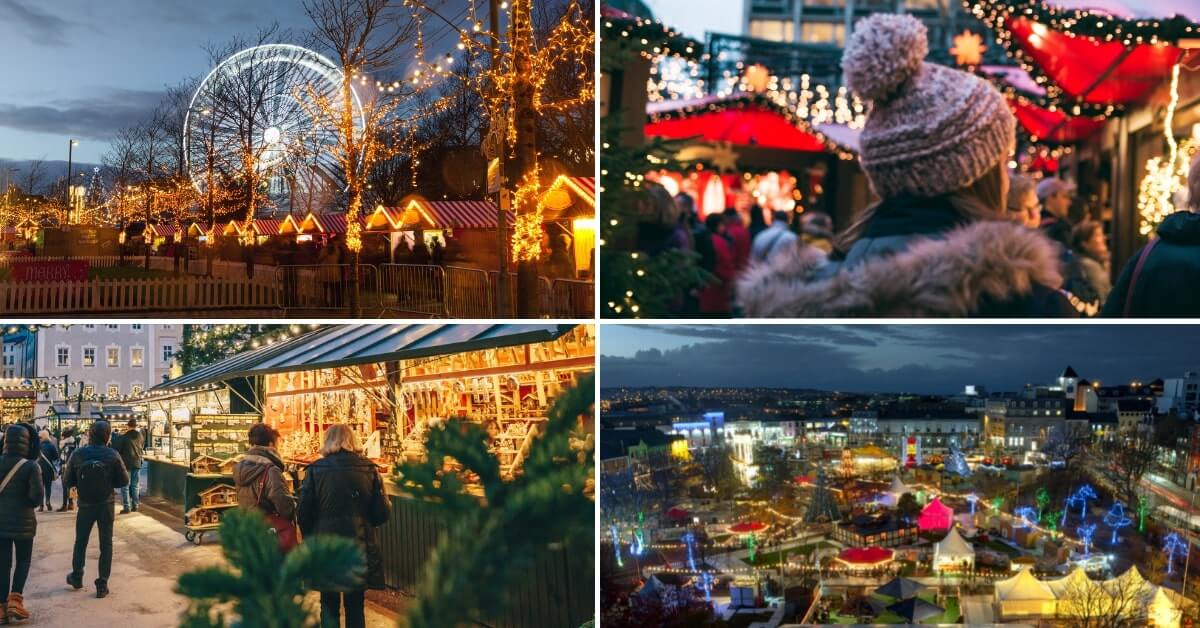 Visiting a Christmas market in Ireland has become a popular Irish Christmas tradition over the last 7 years or so.

In the guide below, you’ll discover the best Christmas markets Ireland has to offer, from Cork and Belfast to Waterford, Dublin and more. 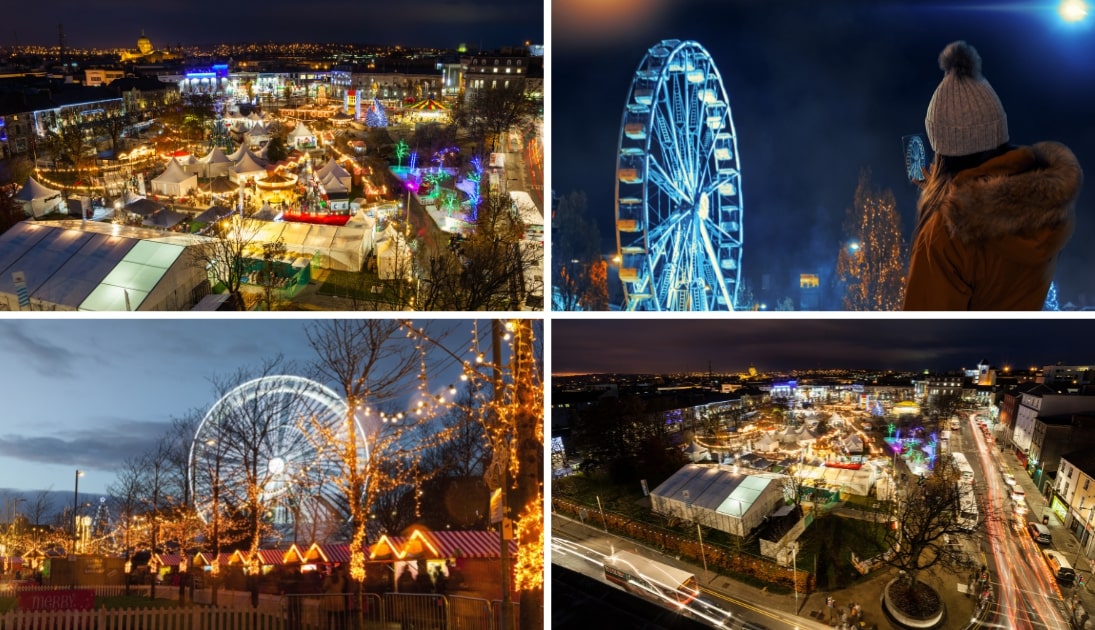 The Galway Christmas Markets are widely regarded as the best Christmas markets in Ireland. And, now entering their 13th year, they’re officially the longest-running!

This year’s market sounds like it’ll be contained to Eyre Square (it was spread across the city previously) and it sees the stalls, the beer tents, the massive ferris wheel and more return.

Date wise, the organisers have confirmed that the Galway Christmas Markets will kick off on November 12th and will run until Dec 22nd. 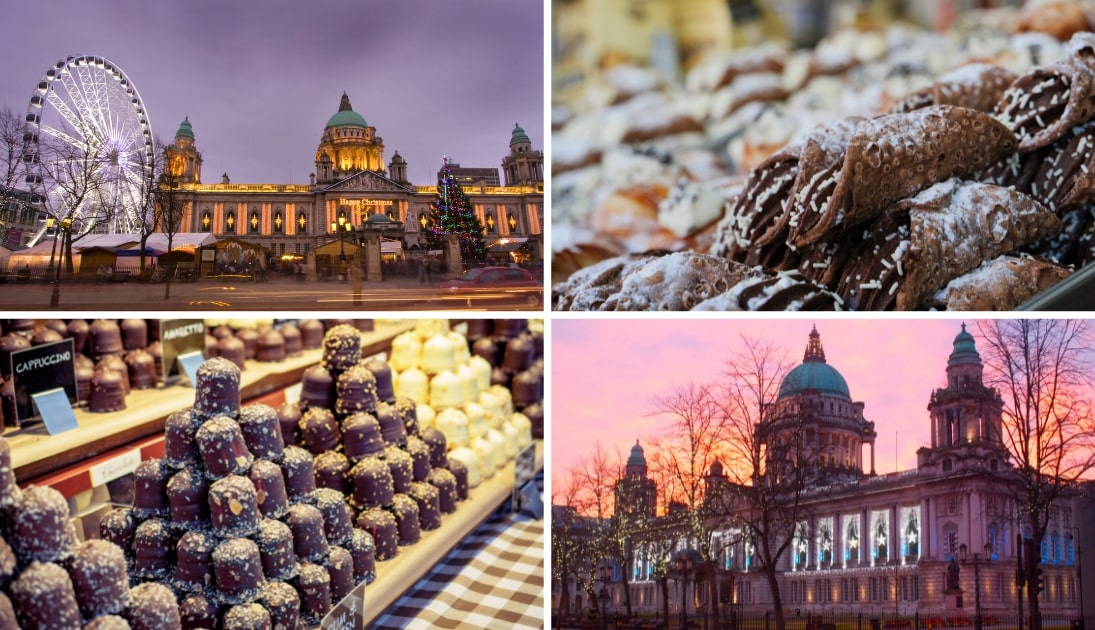 The Belfast Christmas Markets is another of the more popular Christmas market Ireland has to offer, and it’s been on the go for over 11 years now!

Each year, Belfast’s City Hall is transformed into a traditional German-style Christmas market, packed to the brim with 90 masterfully handcrafted wooden chalets.

At the markets here, expect to find a food court with cuisines from 32+ nationalities, heaps of family activities and attractions, like the Santa Train, buzzy beer tents and plenty more.

The organisers have confirmed that the Belfast Christmas Markets will run from November 19th and they’ll run until December 22nd. 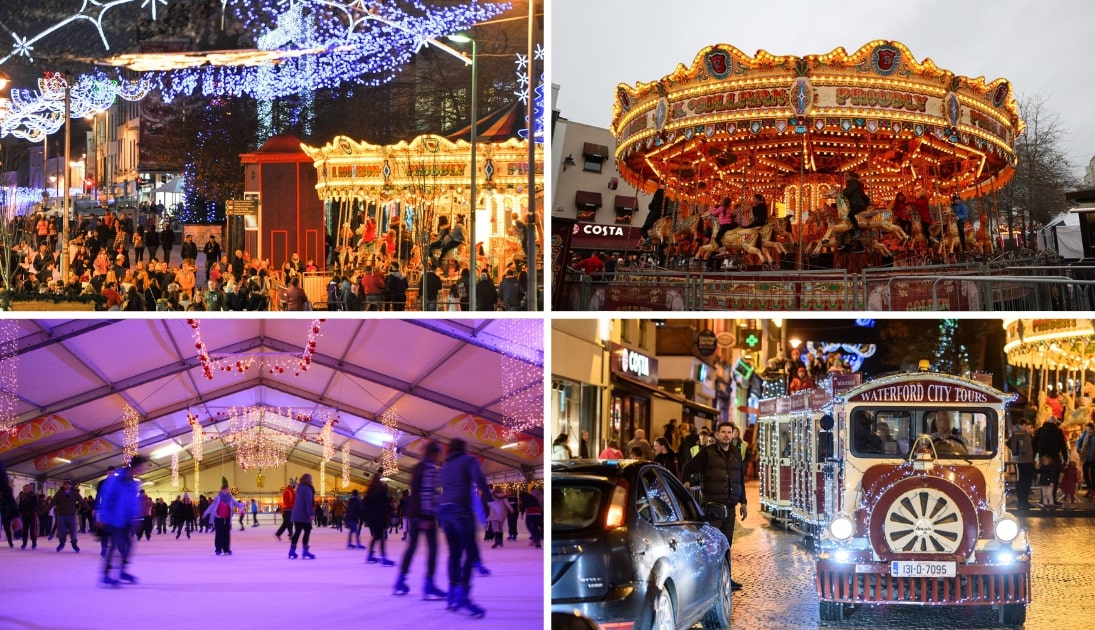 Photos via Winterval on FB

Waterford Winterval is another of the more popular Christmas markets in Ireland, and it’s a great one to team up with a spin along the Waterford Greenway.

Now entering its 10th year, Winterval has gone from strength to strength and this year is set to be ‘Its biggest and most festive programme yet’.

Visitors here can expect everything from the big market, the ice skating rink and the Illuminates feature along with the Winterval Train, the now-iconic 32 metre high Waterford Eye and more.

The organisers have confirmed that Winterval will return from Friday, November 18th and it’ll run until Friday, December 23rd. 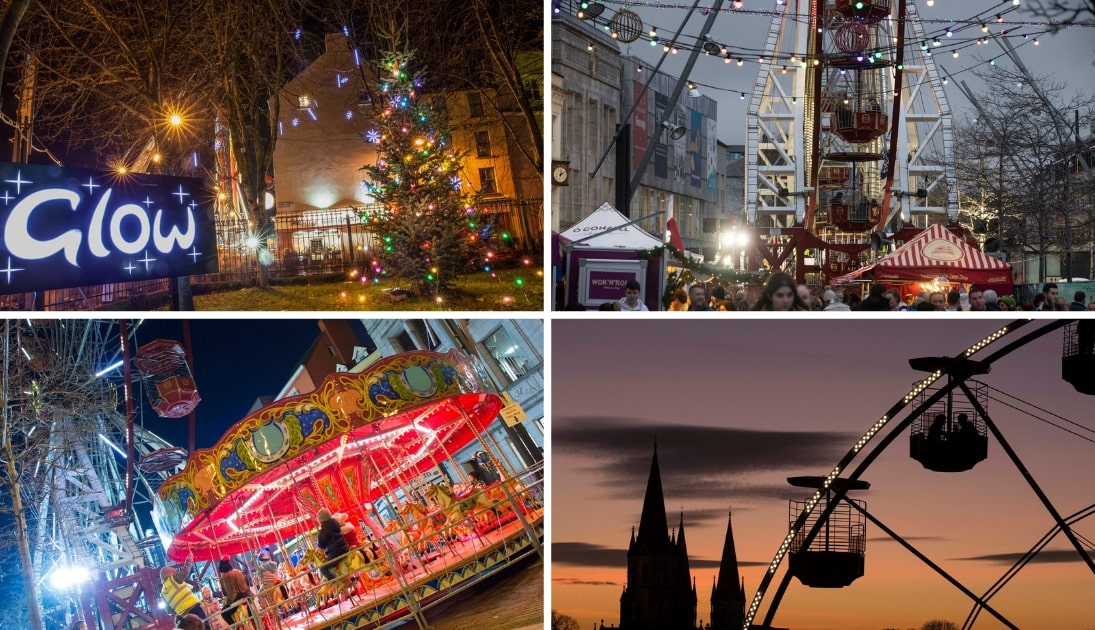 Photos via Glow on FB

The Cork Christmas Markets (Glow Cork) are one of several Christmas markets in Ireland that tend to get overlooked by many looking to visit a festive event in Ireland.

Which is a shame, as Glow Cork packs a fine punch! Every year, the city’s already buzzy atmosphere is given an added boost with the arrival of Glow.

Visitors here can expect everything from the now-iconic Ferris wheel and the usual market stalls to some finely decked out streets.

The Cork Christmas Market 2022 are officially returning on November 25th and they’ll run until January 9th. 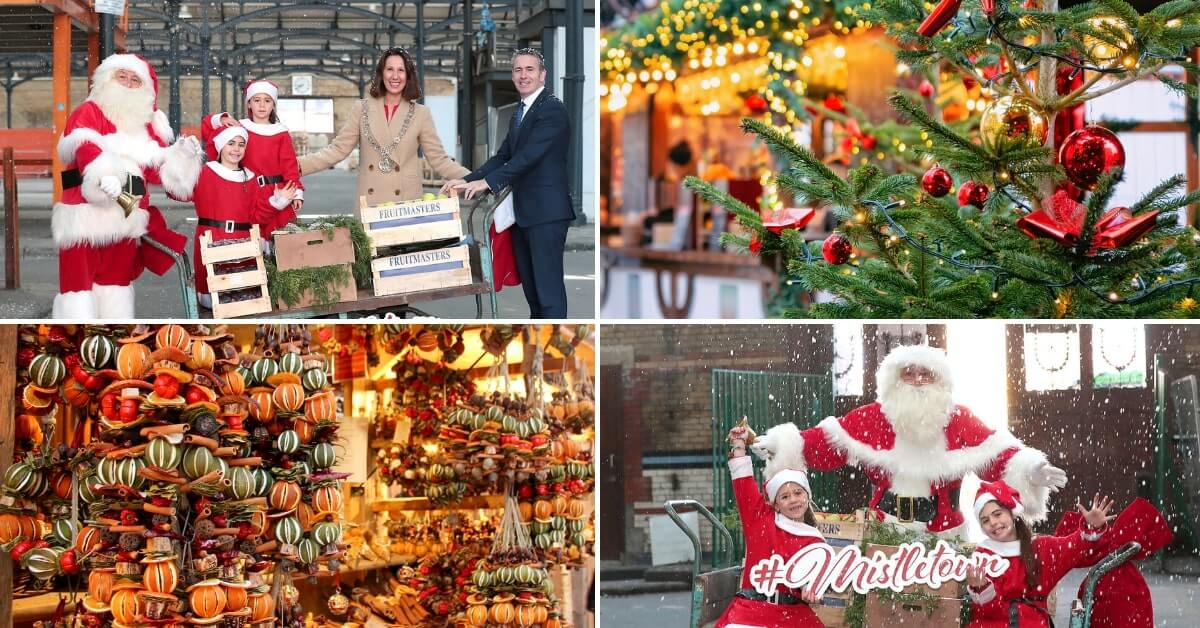 The Dublin Christmas Markets have been very hit and miss over the last 7 or so years, with many long-running markets now no longer in operation.

The Dublin Castle Christmas market is one of the only festive markets that has run consistently over the last couple of years and it’s back this year from December 8th to December 21st.

One we have a lot of hope for is the Mistletown Market (TBC) which is set, if it finally launches, set to be the largest Christmas market in Ireland.

We’re also hoping to see the return of the Dun Laoghaire Christmas Market this year but, like the ones above, it’s still TBC. 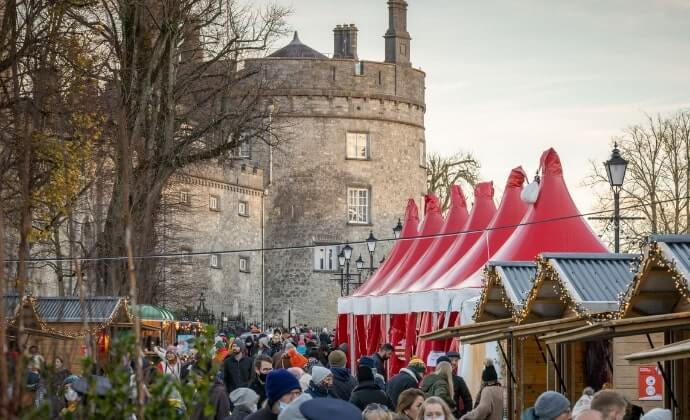 Last year, the market took place every weekend, starting at 10am and running until 6pm. These are your usual festive stall markets, with local vendors selling everything from food to tasty bits and bobs.

Organisers have confirmed that the market will return on November 26th and they’ll run until December 23rd. 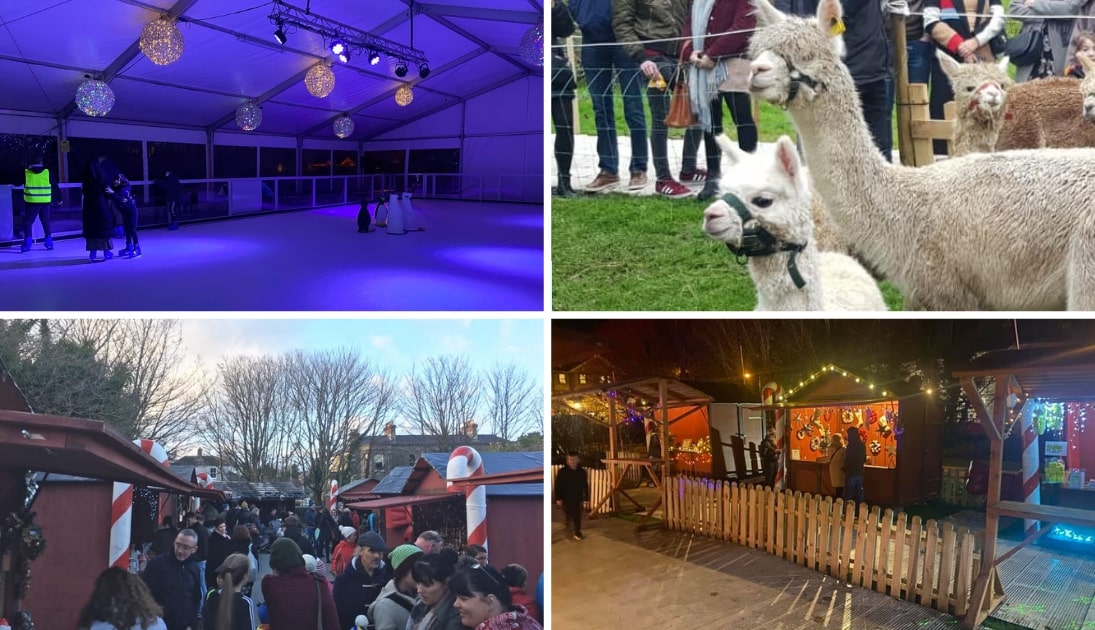 Those that visit can expect a Santa Express experience, an ALPACA experience, a magical funfair, craft stalls, food, fire shows and much more.

The dates for the Wicklow Christmas Market 2022 have been officially confirmed and the festivities will take place on:

So, we’ve had a lot of emails over the last couple of weeks about the various different Christmas markets Ireland has to offer and what the craic is in 2022.

Here’s a few of the most FAQs. We’ll update this guide over the coming months as more dates are confirmed.

Where are the best Christmas markets in Ireland?

I’d argue that the best Christmas markets in Ireland are the ones in Galway, Waterford, Belfast and Cork.

Will Christmas markets be open in 2022 Ireland?

Yes, many Irish Christmas markets have confirmed their dates for 2022, like the ones in Galway, Wicklow, Belfast and Waterford.

Any suggestions as to where to stay in either cork or Waterford for these markets? Myself & 2 children aged 10 & 6, thanks!

Thank you so much for your recomendations! I'm visiting Dublin this December and cannot wait to visit these markets!!

Awww you didn't mention The Boatyard Market in Greystones @boatyardmarket on facebook. Fab little fundraiser for Greystones Tidy Towns and St Vincent de Paul. Over 35 traders every Saturday and Sunday in December. Santa on a Sunday!