The Dublin Famine Memorial is a feature on the quays that makes the mind wander.

It was during the 18th and 19th centuries that Ireland bore witness to suffering via times of famine that is still felt to this day. The Great Famine brought catastrophic times to Ireland.

And these stories often go unheard by locals and tourists alike. The Famine Statues in Dublin is just one great attraction in the area that sparks thought.

Below, you’ll discover everything you need to know about the Famine Memorial in Dublin, from when it was built to the story behind it.

Some quick need-to-knows about the Dublin Famine Memorial

Although a visit to the Dublin Famine Memorial is fairly straightforward, there are a few need-to-knows that’ll make your visit that bit more enjoyable.

You will find the Famine statues on Custom House Quay in the Dublin City docklands, close to the Talbot Memorial Bridge (here on Google Maps) and not far from Grand Canal Dock.

2. An insight into the past

These statues commemorate Irish history’s most profound disaster in the mid-19th century (1845-52) when Ireland lost more than one million of its people to starvation. As well as those who died, some millions more emigrated from the country, resulting in a drop in population from between 20 to 25 percent.

To find out more about this period of history, visit the EPIC museum and the Jeanie Johnston, which are both a few minutes’ walk away. The memorial is a good place for a quick visit before heading to the more in-depth tours that will give you a real insight into the causes of the famine and what resulted from it.

About the Famine Memorial in Dublin

The Dublin Famine Memorial was designed and crafted by Dublin sculptor Rowan Gillespie, and they were presented to the City of Dublin in 1997.

The haunting sculptures are of six life-size figures dressed in rags and clutching their meagre belongings and children as they walk towards the ships that will take them away from Ireland.

In 2007, similar figures were unveiled in Canada’s Ireland Park in Toronto. The two memorials represent Irish emigrants leaving the country to seek out a better life elsewhere. 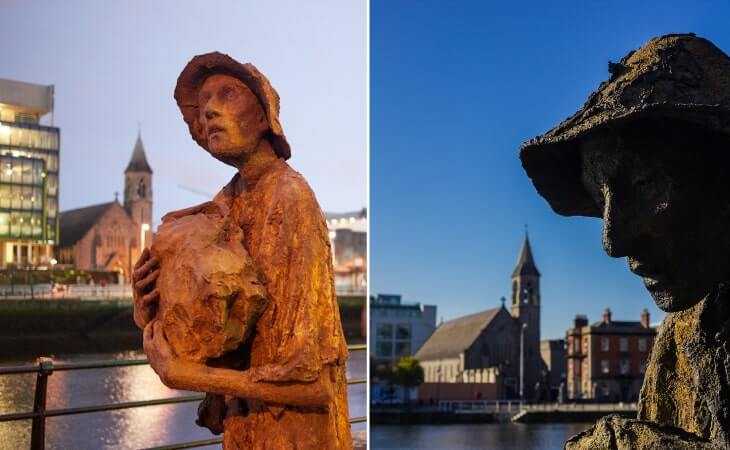 Many people who visit Ireland for the first time never fully grasp what took place when the famine hit the island. The worst affected areas were the west and south of Ireland.

While the overall population decreased by more than two million (those who died and those who fled), in some areas it decreased by as much as 67 percent between 1841 and 1851.

The main cause of the famine was the potato blight, which destroyed potato crops, the primary source of food for many exacerbated by the British Government’s incompetence and reliance on laissez-faire capitalism, as well as not imposing a ban on food export from Ireland during the time.

It worsened relations between the Irish and the ruling British government and heightened ethnic and sectarian tensions, boosting republicanism and nationalism. Is causes and impact have been debated ever since.

Places to visit near the Famine Memorial Dublin

One of the beauties of the Dublin Famine Memorial is that it’s a short spin away from many of the best places to visit in Dublin.

Below, you’ll find a handful of things to see and do a stone’s throw from the Famine Memorial in Dublin (plus places to eat and where to grab a post-adventure pint!).

The fully interactive EPIC museum will guide you through the dramatic and inspiring stories of the Irish people who travelled all over the world, where you will discover the far-reaching influence of Irish history, and the impact those 10 million Irish emigrants had on the world. 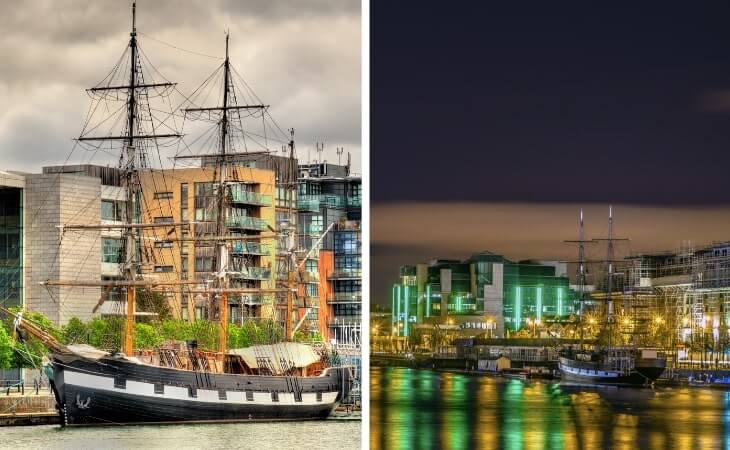 The Jeanie Johnston will transport you back in time to the gruelling journey emigrants faced as they embarked on a voyage in the hope of a better life in North America. The boat is docked at Custom House Quay and the tour beings with a walk around the upper deck and then an exploration of the lower deck to see for yourself the cramped conditions where the voyagers spent most of their time. 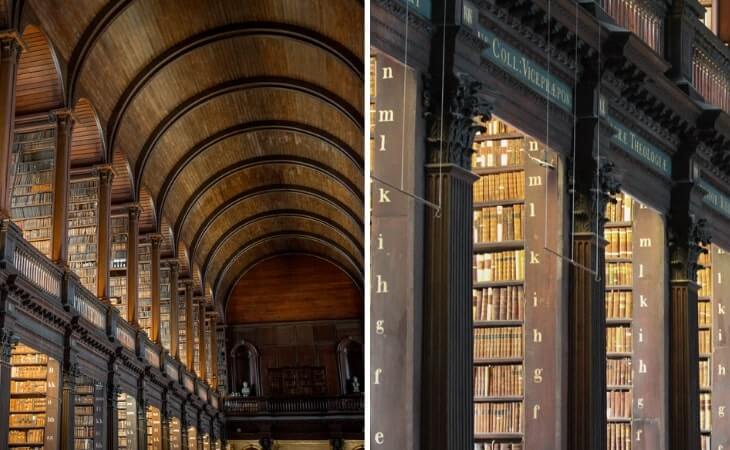 Visit Trinity College (Ireland’s most famous academic institute) and the Long Room where the ancient 8th century Book of Kells is held. Stroll around the magnificent gardens and hope all that surrounding intellect settles on you!

FAQs about the Famine Statues in Dublin

We’ve had a lot of questions over the years asking about everything from ‘Are the Famine Statues in Dublin worth visiting?’ to ‘What is there to see nearby?’.

Why are the Famine statues in Dublin?

The Famine Statues in Dublin are where they are as they were presented to the City of Dublin by the artist who created them in 1997.

Where is the Dublin Famine Memorial?

You will find the Famine Statues in Dublin on Custom House Quay in the docklands, close to the Talbot Memorial Bridge.

Why are the Famine Memorial Statutes so tall?