The lovely Blackrock Park is one of our favourite parks in Dublin.

It has strong Victorian influences, as you’ll see from the entrance off Merrion Avenue—the massive granite piers and gates give you a sense of what’s to come.

When you ramble through it, you’ll be treated to a beautiful melody of sights and sounds, with plenty to discover within its grounds.

Below, you’ll find info on everything from parking at Blackrock Park and its opening hours to where to grab parking nearby.

Some quick need-to-knows about Blackrock Park 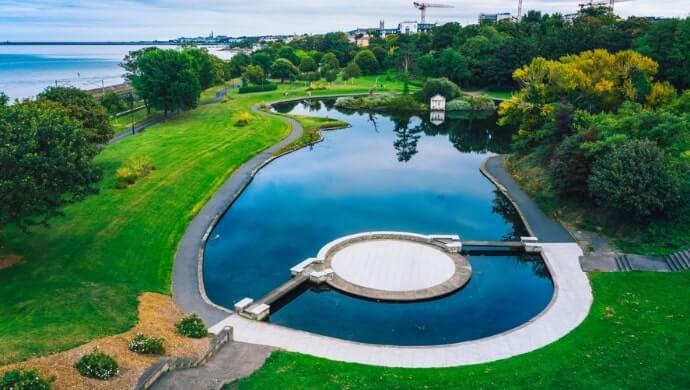 Although a visit to Blackrock Park is fairly straightforward, there are a few need-to-knows that’ll make your visit that bit more enjoyable.

Probably because it’s a linear park that takes you through to Booterstown, the Park is open twenty-four hours a day, all year round.

There are a few options for parking at Blackrock Park. Eighteen spaces are available inside the park (see them here). Naturally enough, these fill up fast on warm days/at weekends, so try and arrive early.

The playground is not huge but is perfect for small children, and you can also take them to the pond to see the ducks and swans. All ages will enjoy the butterfly garden, and there are loads of spaces that encourage wildlife and teach about the importance of creating these havens for pollinators.

Several bus routes, including the 46A, service Blackrock from all corners of Dublin City and County and you can also reach Blackrock Park from either Booterstown or Blackrock DART stations. 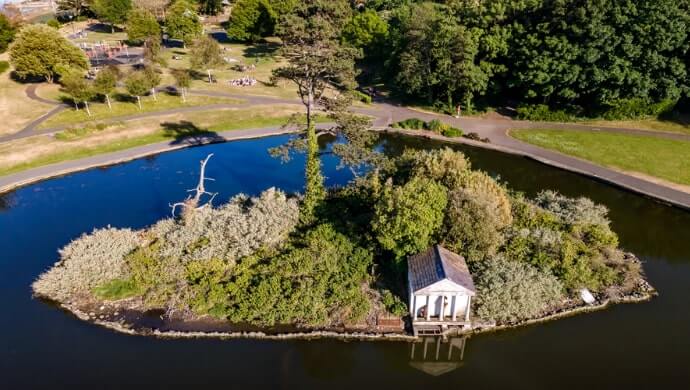 Blackrock Park unites urban and suburban as its location is part of both a coastal route north and a coast to mountain route on the south side.

The Park has strong Victorian influences, as you’ll see from the entrance off Merrion Avenue—the massive granite piers and gates present an impressive welcome.

Inside the entrance is an unused toilet pavilion, while another pavilion sits on a raised area overlooking the bandstand. This pavilion was built in the late 19th Century and was where the visitors could buy sweets and cakes. The East entrance off Rock Road also has ornate gates, and this entrance led to the Railway.

Nowadays, the Park boasts sports, exercise, and picnic areas as well as a cycle path and a well-equipped children’s playground. The gardens are beautiful and categorised as Sensory, Herb, Bees & Butterflies, and a wildflower meadow.

There’s also a demonstration site teaching about home composting. Ducks and swans populate the pond, which has a small island and is a firm favourite among visitors. Both birds and the island share the pond with the Peace Fountain, which was erected to mark the 1986 International Year for Peace.

This is a special place to get away from the traffic on Rock Road. Feel the breezy sea air from just over the wall that runs the length of the Park or climb up higher and watch the cargo ships and ferries as they near Dublin Port.

Easy access to and from the Blackrock or Booterstown DART stations makes it easy for Dubliners near and far to pay a visit to this urban oasis. You’re close to the food hall of the Frascati Centre if you want to make a day of it or wander into the village and enjoy all it has to offer.

Watch the ducks and swans darting and diving around the island in the centre of the pond, and if you have children, there’s a lovely well-maintained playground for them. There’s also a clearly defined cycle lane, so everyone is safe, and there’s a gym area for adults.

Like many parks around the country these days, Blackrock Park is playing its part for pollinating species with a wildflower meadow, a Bee and Butterfly Garden, and a demonstration area to teach you about composting at home. Allow a couple of hours here.

Things to do near Blackrock Park

One of the reasons that a trip out to Blackrock Park is one of our favourite day trips from Dublin City is due to its proximity to some mighty Dublin attractions.

Below, you’ll find a handful of things to see and do a stone’s throw from Blackrock Park (plus places to eat and where to grab a post-adventure pint!).

Photo by the gent that is @Padddymc.ie

Seapoint Beach is rocky. You can swim there at high tide but be careful at the South end because the shallow water holds hidden rocks. The North end has slipways and steps leading to water which makes it easy to access. Lifeguards are on duty during the summer season.

Dun Laoghaire is home to the National Maritime Museum of Ireland and is popular for its East Pier, which offers excellent walks, winter, and summer. There’s plenty of things to do in Dun Laoghaire and there’s lots of great restaurants in Dun Laoghaire, too.

We’ve had a lot of questions over the years asking about everything from ‘Is the park open all year round?’ to ‘Where is there to visit nearby?’

Is there parking at Blackrock Park?

Yes – but it’s very limited. There are only 18 parking spaces here and on a good day they fill up fast.

No. Probably because it’s a linear park that takes you through to Booterstown, the Park is open twenty-four hours a day, all year round.