Golden Strand is one of the more popular beaches on Achill.

Below, you’ll find info on parking and what to look out for while you’re there.

Some quick need-to-knows about Golden Strand 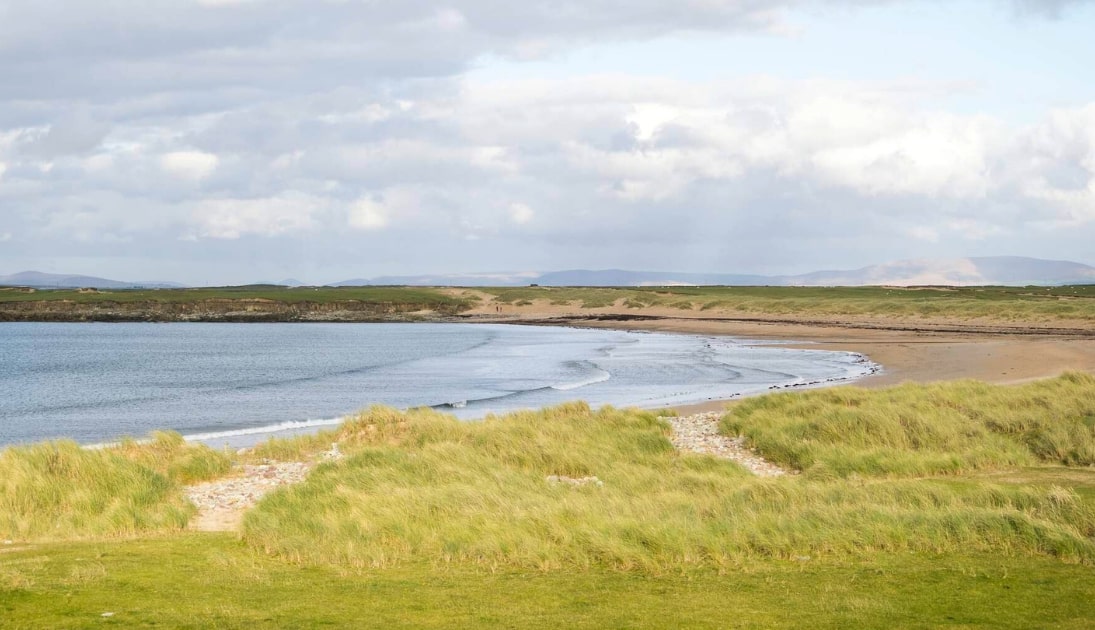 There’s lots to love about Achill’s Golden Strand, but before you pull on your swimming costume, let’s go over the basics.

There’s a decent car park at the edge of Golden Strand, with plenty of space for cars, as well as bike racks and picnic tables. While there are no public toilets here, there is a great pub near the car park, and it’s worth visiting for refreshments.

Golden Strand is a Blue Flag Beach, and while there used to be lifeguards in the past, at the time of writing it doesn’t look as though there are. As such, we can’t recommend swimming at the beach. It’s best to ask locally or try one of the other lifeguarded beaches nearby.

4. Part of the Atlantic Drive

The Golden Strand marks the end of the fantastic Atlantic Drive, a road that explores the best sights of Achill Island. The beach is the perfect place to relax and stretch your legs after enjoying the drive, and it’s a top spot for a picnic. 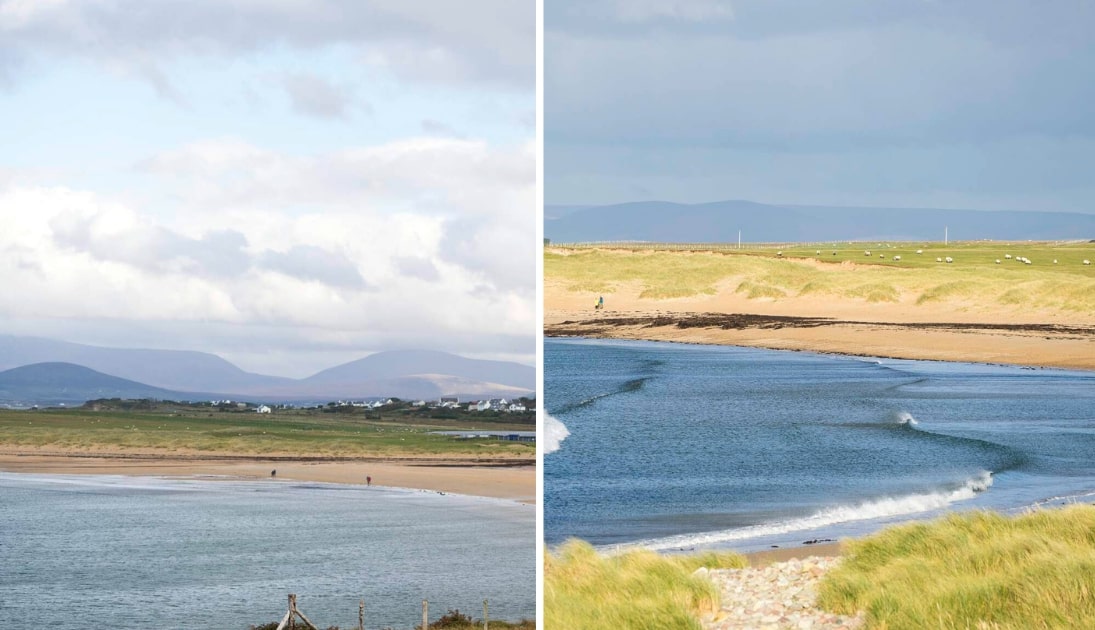 Golden Strand is around 3 km outside of Dugort village and was one of the first places to attract tourists to Achill Island after the Slievemore Hotel opened in the 1830s.

Looking out over Blacksod Bay, it’s a sandy beach that stretches for almost one kilometre. Large pebbles are scattered about on one edge of the beach, while sand dunes roll up behind it.

The Gap of the Horses

Golden Strand is also known as Barnyagappul Strand, which translates to the gap of the horses.

The name comes from the days in which seaweed was used to fertilise the fields. Back then, horses would carry the seaweed across the sands to the farms.

The Golden Strand is a fantastic place for sea kayaking and you can enjoy organised tours in the area.

There’s also the Blueway Kayak Trail, which is great for more experienced canoeists as it follows the coast around to Dugort Beach.

Things to do near Golden Strand

One of the beauties of the Golden Strand is that it’s a short spin away from many of the best places to visit on Achill.

Below, you’ll find a handful of things to see and do a stone’s throw from Barnyagappul (if you’re peckish, see our Achill restaurants guide). 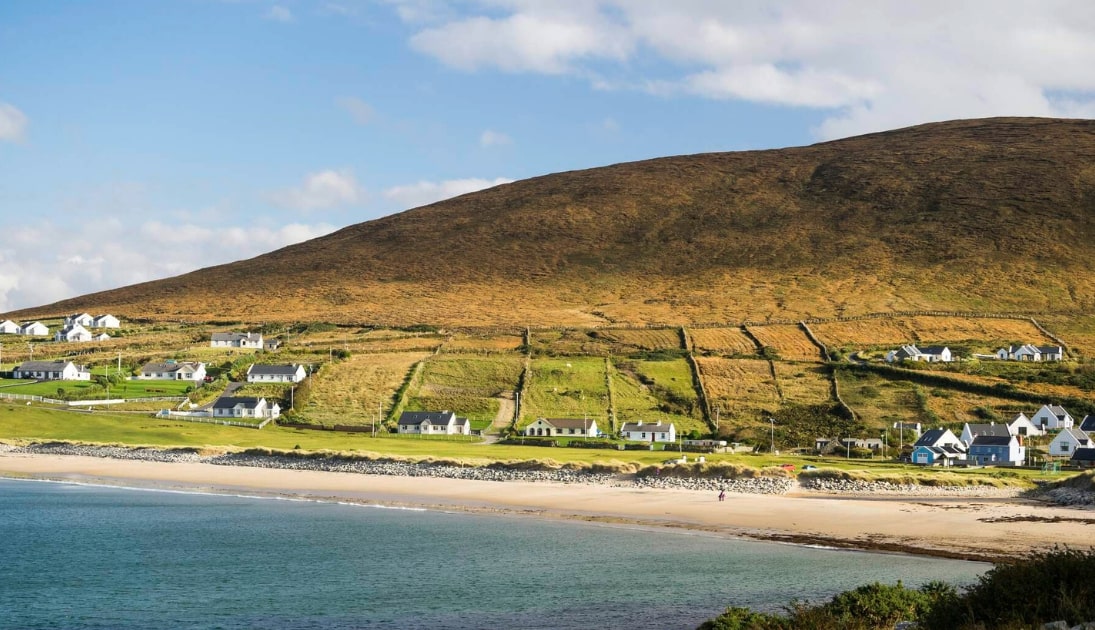 Dugort Beach is just a short drive, or walk, away from Golden Strand, and is pretty much its smaller cousin. What it lacks in size though, it makes up for in gorgeous scenery. The beach sits at the foot of Slievemore Mountain, offering incredible views of the slopes, which contrast against the ocean beautifully. 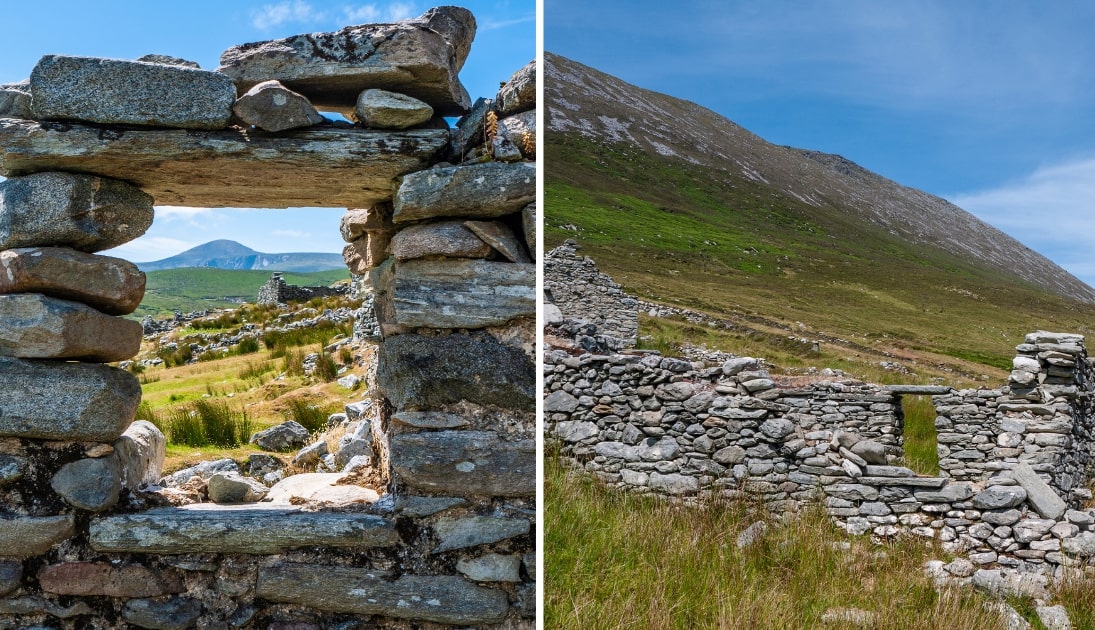 This deserted village is steeped in history, which some believe stretches as far back as 5,000 years. The most recent iteration of the village still sits on the southern slope of Slievemore Mountain in the shape of almost 100 stone cottages, slowly crumbling to ruin. 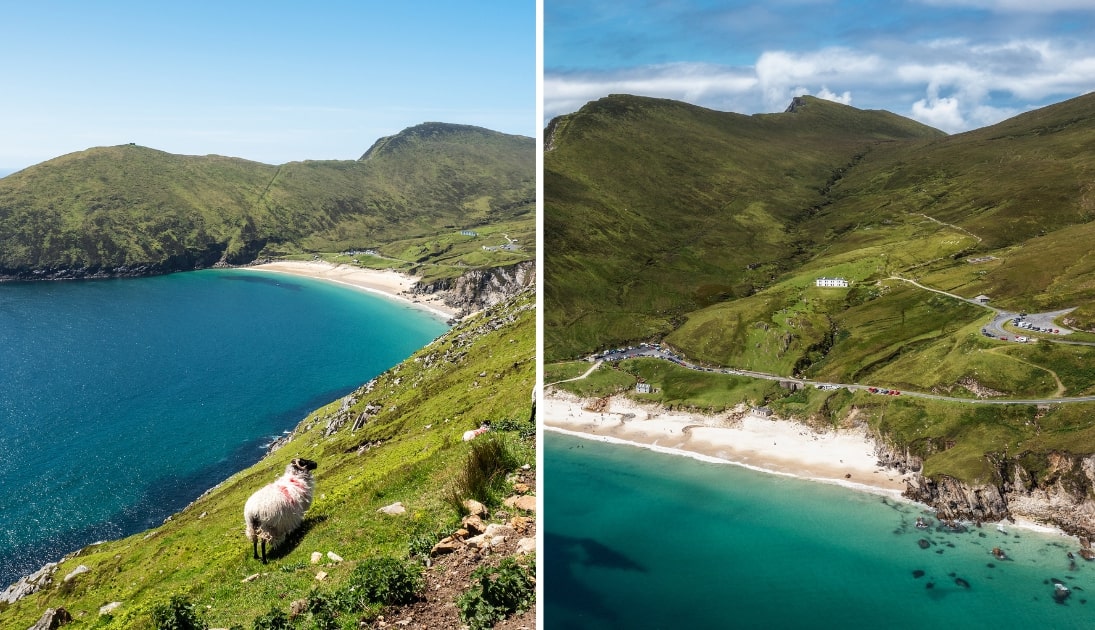 For another fantastic Blue Flag Beach, Keem Bay is hard to beat. The midsize bay sits sheltered between vibrant green slopes, with the deep azure ocean laps at the soft golden sands. You can also hike up to the Croaghaun Cliffs from here.

FAQs about Golden Strand on Achill

We’ve had a lot of questions over the years asking about everything from ‘Is there a surf school?’ to ‘Where do you park?’.

Is Golden Strand worth visiting?

Yes! This is one of the more impressive beaches on Achill Island and it’s well worth carving out some time to drop by during your trip.

Can you swim at Golden Strand?

We can’t find any official information online to confirm whether it’s safe to swim here. It doesn’t look like there are lifeguards on duty, so check locally before going near the water.