I‘d argue (and I have…) that Inishturk Island and nearby Clare Island are two of the most overlooked places to visit in Mayo.

The island, which is easily accessible from Roonagh Pier near Louisburgh, is home to buckets of raw, wild and unspoiled scenery.

The island, which you can visit on a day trip or over the course of a weekend, is a walkers paradise and it’s well worth the 1-hour ferry ride.

In the guide below, you’ll discover everything from things to do on Inishturk and where to grab a bite to eat to what to see nearby. 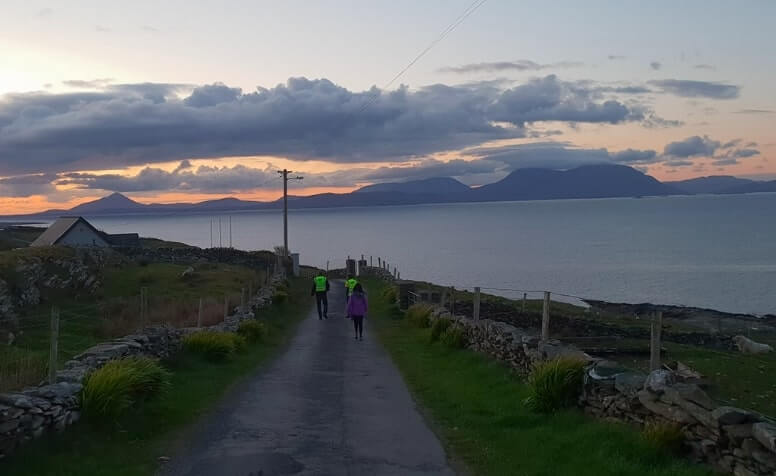 So, unlike some of Mayo’s other attractions, a visit to Inishturk requires a little bit of planning. Here are some need-to-knows.

A mere 5 x 2.5 kms, Inishturk is 14.5 km off the west coast of Mayo. With its wall-like cliffs off the northwest and steep hills to the north, it sticks out from the Atlantic Ocean and has a permanent population of some 58 people.

2. Getting to the island

The O’Malley Ferries service operates a year-round crossing to the island from Roonagh Pier, about 6 km from Louisburgh and just before you reach the Doolough Valley. It takes “about an hour” to get there (according to the guy running the ferry that I just called).

While a trip to Inishturk takes a bit of planning, we highly recommend you take the time. There are beautiful beaches, lovely places to stay, some fabulous looped walks around the island and a warm welcome guaranteed.

There are two main settlements on the island located on the more sheltered eastern side – Ballyheer and Garranty. There is a social club, Mountain Common, situated between the two.

The island has been inhabited on and off since 4000 BCE, and permanently since around 1700. During the Napoleonic Wars of the early 19th century, the British built a Martello tower (a small defensive fort) on the island’s western coast.

The island’s population stood at a high of 577 before the Great Famine, declining fairly steadily after that.

The Inishturk Community Centre opened in 1993 and is used as a library and pub. In 2011, the primary school on the island had only three pupils – believed to be the smallest primary school in the country.

In more recent years, Turkfest, a lively festival of arts, has become one of the more unique festivals Ireland has to offer.

How to get to Inishturk Island 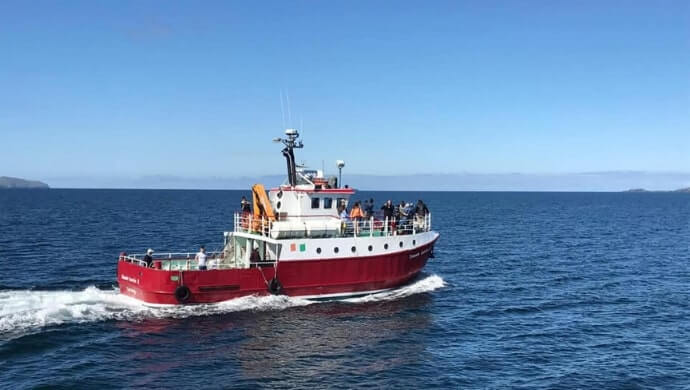 To get to the island, you’ll need to take the Inishturk Island Ferry, which leaves from Roonagh Pier, a stone’s throw from Louisburgh Village.

Here’s some need-to-knows about the Inishturk Island Ferry (note: you need to get this booked in advance).

Where you get the ferry from

The main embarkation point for the ferry is Roonagh Pier. It is also possible to get to Inishturk from Cleggan Pier in County Galway via the Inishturk mail boat on Tuesdays and Thursdays, but this is subject to change.

The journey takes “around an hour” according to the Inishturk Island ferry (and you’ll be treated to some amazing scenery on the way).

How much it costs

It’s worth noting that weather, as is the case with all ferry services in Ireland, can result in the crossing being cancelled. The Inishturk Island Ferry website recommends that you call them in advance of your trip to confirm the ferry is still going.

Things to do on Inishturk Island

There are plenty of things to do on Inishturk Island, especially if you, like us, like to explore on foot.

Below, you’ll find everything from the island looped walk and spectacular viewing points to food, pubs and more. 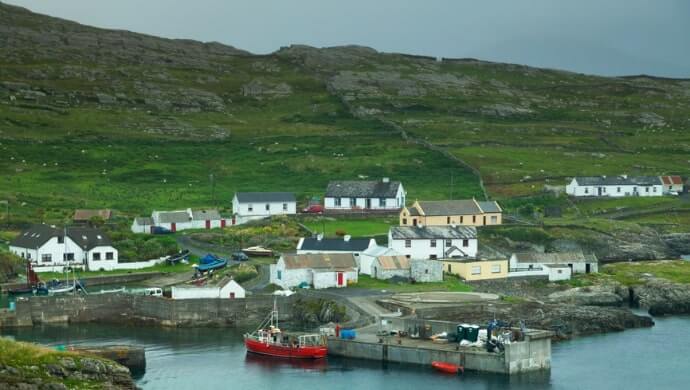 Most people visit Inishturk to experience daily life that is far removed from the urban grind. This small, isolated spot is where you come to charge the batteries and take lungfuls of fresh, ozone-laden air. It is also about stepping back in time to simpler days; again something most visitors enjoy experiencing.

Inishturk’s GAA pitch grounds are notable for the scenery that surrounds it, the hills and the seascape. Sports grounds can sometimes look incongruous in non-urban settings, which is what makes the sight of this so delightful.

3. Saunter along the sand on some of Mayo’s finest beaches

You’ll find some of the best beaches in Mayo on Inishturk Island. On the south-east coast of the island are two beautiful beaches protected by the coves.

Tranaun and Curraun offer stunning views and are great examples of scenery that has changed very little in hundreds of years.

4. Soak up the scenery on one of several looped walks 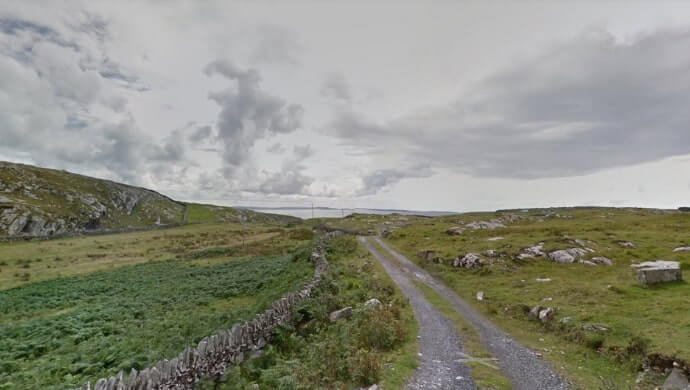 There are two loop walks on the island. The inner walk is rather more general, and the second a cliff walk that requires a good fitness level. They both start at the island pier. The Lough Coolaknick Loop is 5 kilometres and takes between an hour and an hour and a half, and the Mountain Common loop is 8 kilometres in total, with an ascent of about 170 metres. 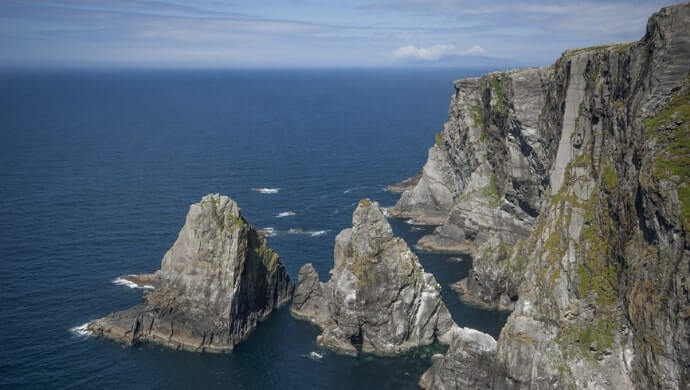 Inishturk is well-known for its majestic cliffs, which is what most visitors travel to the island to see. There’s a vantage point where you will be able to see the Buachaill Mor and Buachaill Beag sea stacks, and from here, you can follow the clifftop to Dromore Head for more great vistas. There are lots of bird sanctuaries on the cliffs; a proper thrill for bird watchers.

6. Step back in time at the Signal Tower

The signal tower also called a Martello Tower was built in 1805/1806 in response to the threat from Napoleon. A whole network of towers was built along the western coast.

Malin Head was number 82 and Inishturk number 57. They used heliographs or polished steel plates to reflect the sunrays to passing ships. There’s a fire lighting ceremony at the tower every year, which also takes place simultaneously on both Achill Island and Clare Island.

7. See the Tale of the Tongs 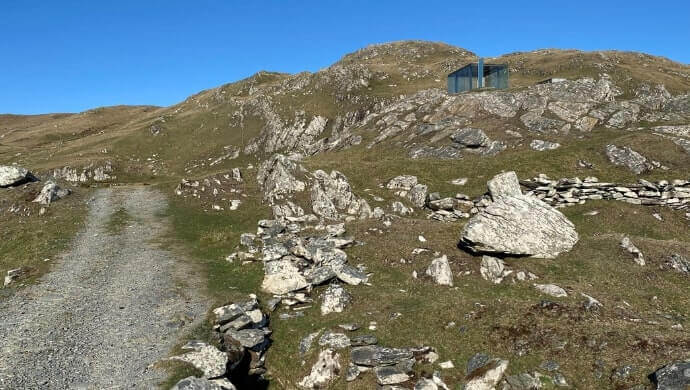 This was a commemorative architectural installation project included in the Ireland Gathering of 2013 and was designed by Travis Price and students from the Catholic University of America.

The installation represents centuries of people gathering on Inishturk and it acts a shrine, a respite, a viewing and resting point. It is a spiritual and cultural focus point representing the global Irish diaspora.

8. Plan your visit around Turkfest

Turkfest is a festival that has taken place every other year since 2017 (it started in 2013) and is billed as “an exploration of craic and island adventure”.

It is held on the second weekend in June, when the island throws open its doors to those who want to listen to music, join in beach barbecues and explore the landscape.

9. Give glamping a crack 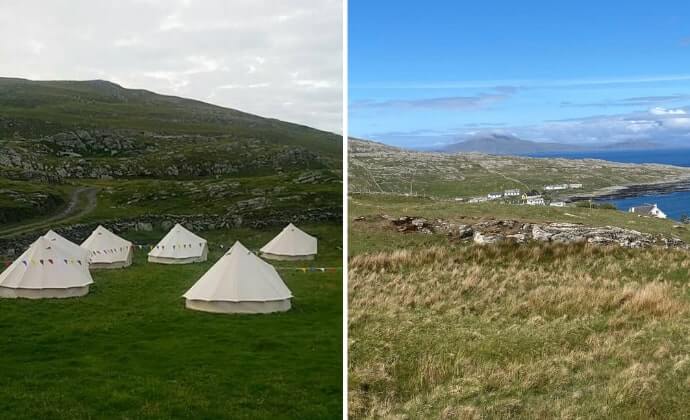 If you are looking for a stay with a difference then a glamping holiday may fit the bill. The site nestles at the foot of a naturally occurring amphitheatre which is also a great spot for star gazing.

The site is fully equipped with airbeds, bathrooms and shower facilities, and the tents can accommodate individuals, families, large and small groups. This is one of the more unique places to go glamping in Mayo for good reason.

10. Enjoy a meal with a view from Caher View restaurant 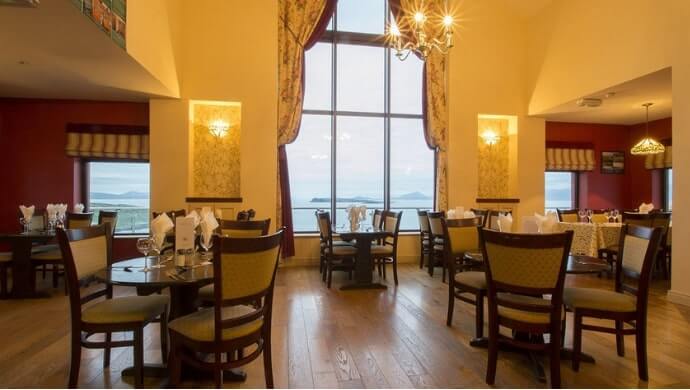 Part of the Community Club refurbishment, the Caher View Restaurant offers meals with a stunning backdrop. It specialises in dishes made from local produce – lobster, pollock and mackerel – and home-made desserts.

Or, you can polish off your visit with a pint at the Community Club. The Community Club bar offers a varied selection of drinks, those oh-so-stunning views and traditional Irish music and craic.

Things to do near Inishturk Island in Mayo

One of the beauties of Inishturk Island is that it’s a short spin away from many of the best places to visit in Mayo.

Below, you’ll find a handful of things to see and do a stone’s throw from Inishturk Island, from hikes and walks to beaches and some very unique tours. 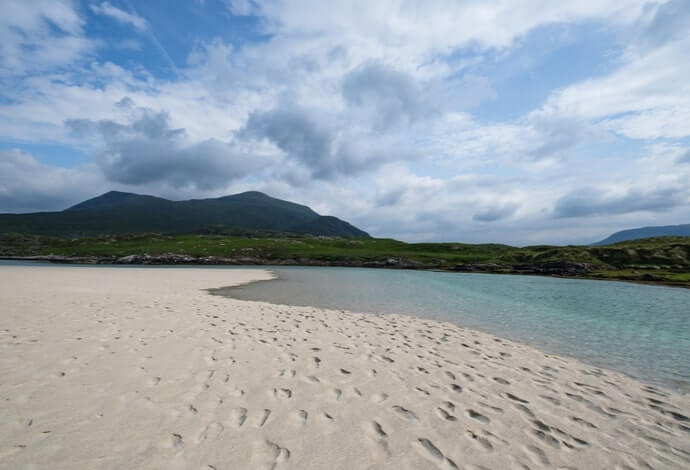 This remote, unspoiled Silver Strand beach in Mayo is located about 25 kilometres south of Louisburgh. It is in an ecologically important area and was awarded the Green Coast Award in 2018. It is a fine sandy beach with gorgeous dunes and has a rich archaeological heritage including megalithic tombs and other monuments. 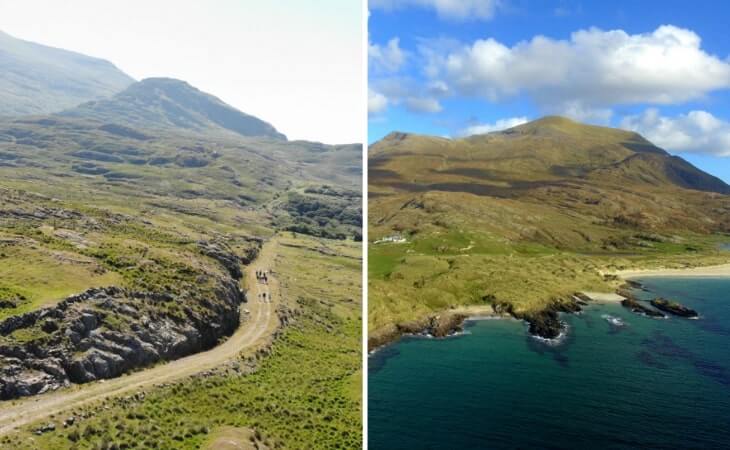 Photos via the Lost Valley

The Lost Valley visitor experience offers those who partake the opportunity to step back in time and see what life was like in rural Ireland for hundreds of years. There is a ruined famine village where you can see the many potato ridges that have lain there undisturbed for almost 200 years. As the Lost Valley is a working valley, you can watch a sheep dog demonstration and live pet lamb feeding. 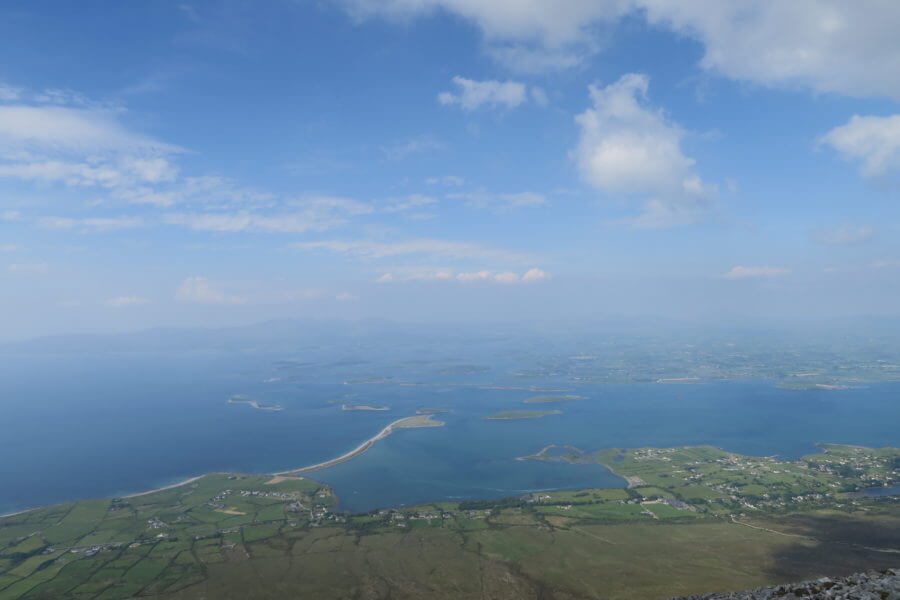 Nicknamed ‘The Reek’, Croagh Patrick is an important pilgrimage site in Mayo, climbed by hordes of them on Reek Sunday, the last Sunday in July, every year. It is the fourth highest mountain in Mayo and is supposed to be where Saint Patrick went to fast for 40 days. 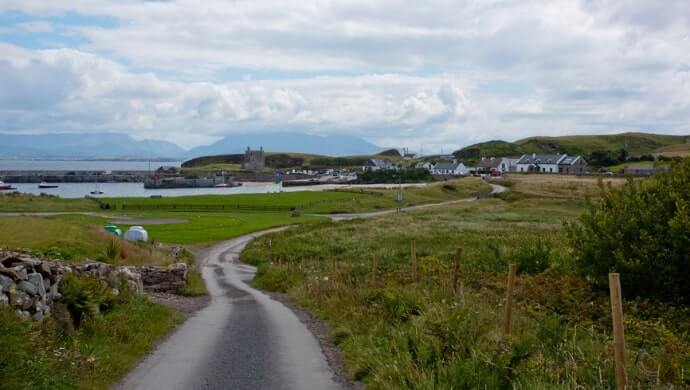 Clare Island is situated at the mouth of Clew Bay and is just north of Connemara. Like Inishturk, it is another hidden gem well worth visiting.

We’ve had a lot of questions over the years asking about everything from how long does the ferry to Inishturk Island take to what there is to do on the islands.

Is Inishturk Island worth visiting?

Yes! The island is home to some glorious scenery and, as it’s off-the-beaten path, it doesn’t attract hoards of visitors, so its beauty is raw, wild and unspoiled.

How long does the Inishturk Island Ferry take?

According to the Inishturk Island Ferry, it takes around 1 hour to get to the island from Roonagh Pier.

Are there many things to do on Inishturk?

You can oak up the scenery on one of several looped walks, see the Tale of the Tongs, see Sea cliffs galore and much, much more.