When I first stumbled across Kinnagoe Bay, I had to pinch myself to check that I was still in Ireland and not Bali!

This place is hands down one of my favourite beaches in Donegal and it’s easily up there with the best beaches in Ireland.

Tucked away among steep, craggy hills, this small stretch of beach offers a mini slice of paradise.

Below, you’ll find info on everything from parking (it can be a pain) and swimming to where to visit close by.

Some quick need-to-knows before you visit Kinnagoe Bay 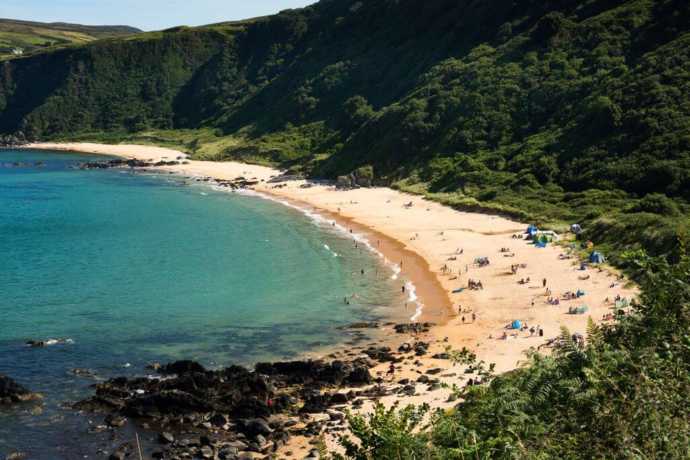 If you’re thinking about visiting Kinnagoe Bay while exploring County Donegal, there are several things you need to know before you go.

The Kinnagoe Bay parking area is at the bottom of a very steep, winding road, so extreme care should be taken both on the way down and back up again (it’s here on Google Maps)! The parking area gets packed during the summer, so try and arrive early.

Although we can’t find any official info online, Kinnagoe Bay is a popular swim spot. HOWEVER, this is one for capable and experienced swimmers only – there’s a BIG DROP not far from the shore that can catch you unaware. Note that there’s also no lifeguards on duty.

4. A view from above

Some of the best views of Kinnagoe Bay are from above, and you’ll find a pull-in area at the top of the track that leads down to the parking area (here on Google Maps). There’s only space for one car – take care not to block the road!

Camping is allowed at Kinnagoe Bay, and since it’s pretty sheltered you can enjoy a pretty peaceful night. Be sure to respect the area and take all your rubbish with you! 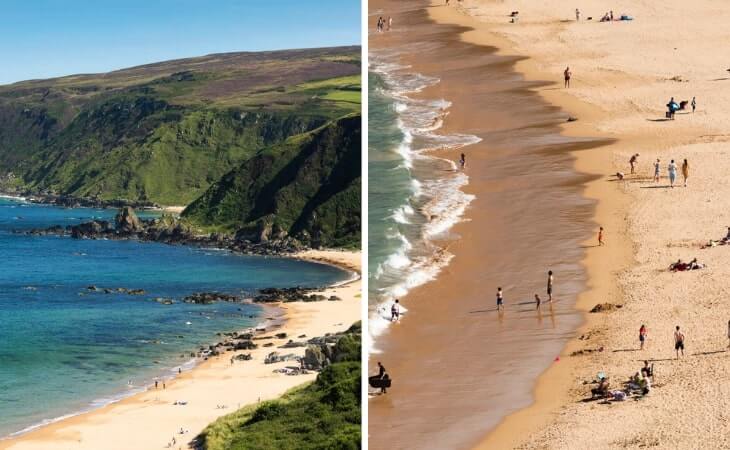 What Kinnagoe Bay lacks in size, it more than makes up for in natural beauty! The yellow sands and sparkling blue ocean are stunning on a sunny day, though the bay never fails to impress, even on the moodiest days.

Located on the stunning Inishowen peninsula, Kinnagoe Bay is arguably the most overlooked viewing point on the Wild Atlantic Way – mainly as it’s slightly off-the-beaten-path.

It’s well worth stopping by, either for the views (more below on how to see it from the view above!) or to take a dip in the calm, blue waters.

Just 4km from the fishing village of Greencastle, Kinnagoe Bay is a popular destination on public holidays, yet remains a relatively hidden gem the rest of the time.

One of the main attractions of Kinnagoe Bay is the shipwrecked La Trinidad Valencera. Discovered by members of the Derry Sub-Aqua Club in 1971, the ship itself actually dates back to more than 400 years ago.

In fact, La Trinidad Valencera was among the 130 ships that made up the Spanish Armada. After defeat in the English Channel, the remaining fleet eventually ended up on the west coast of Ireland.

La Trinidad Valencera ran aground after striking a reef in Kinnagoe Bay, where her wreckage lay undiscovered for hundreds of years. Since her discovery, an entire battery of cannons has been recovered, among many other treasures.

Places to visit near Kinnagoe Bay

One of the beauties of Kinnagoe Bay is that it’s a stone’s throw from many of the best things to do in Donegal.

Now, you can do the likes of the Inishowen 100 drive (or cycle!) and see all of these attractions together, or you can tick them off one by one. 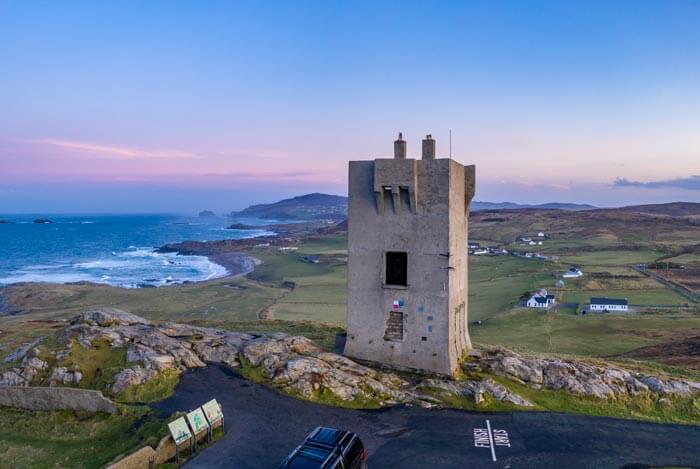 Visit the most northerly point of mainland Ireland and be awestruck by the immense views. Witness the wide open Atlantic Ocean come crashing into the craggy cliffs of Malin Head. 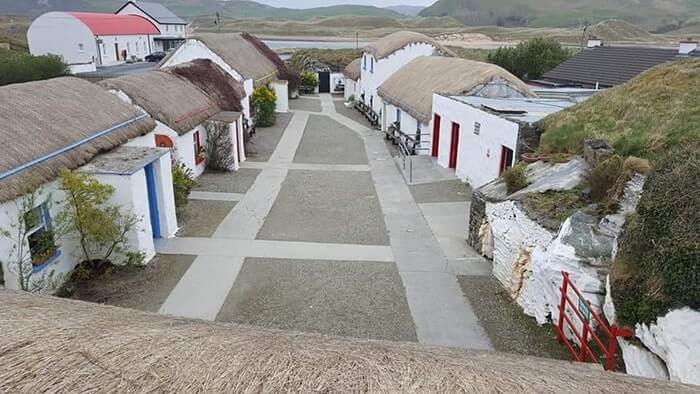 Doagh Famine Village is a museum like no other. Various hands-on exhibits tell the bitter-sweet story of how a community living on the edge struggled and survived against all odds from the 1800s to the present day. 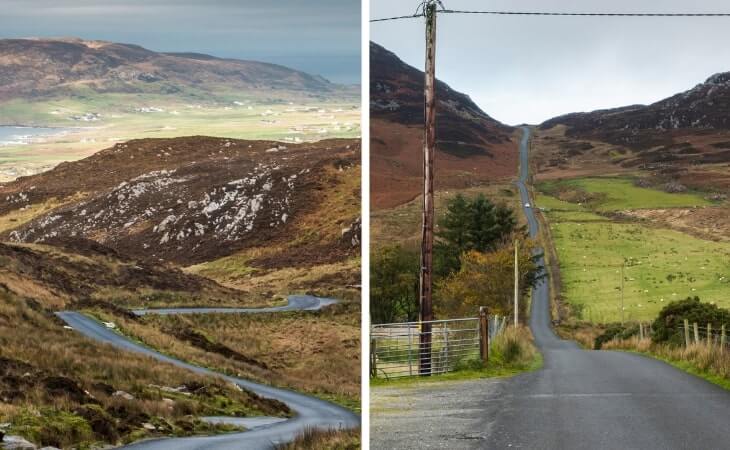 Breathtaking, panoramic views await those who tackle the Gap of Mamore, a steep, narrow pass through the Urris Hills. 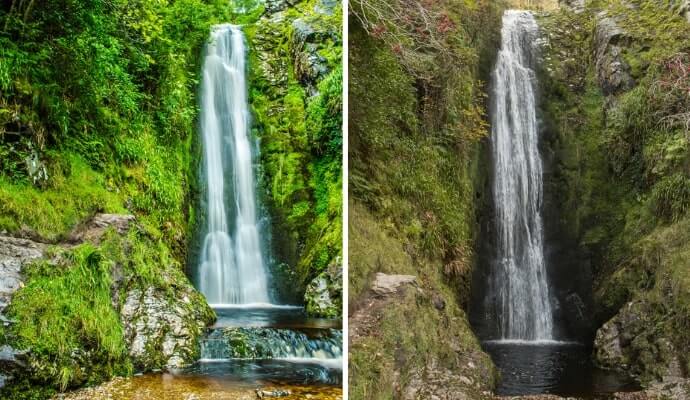 Lose yourself in the magical beauty of the stunning Glenevin Waterfall. Follow the wooded, riverside trail to the crashing waters and immerse yourself in one of Ireland’s many wonders.

FAQs about Kinnagoe Bay in Donegal

We’ve had a lot of questions over the years asking about everything from ‘Where do you park?’ to ‘Is camping at Kinnagoe Bay allowed?’.

Can you swim Kinnagoe Bay?

Yes, but only if you’re a capable swimmer and if the conditions are safe to do so. Note that there’s no lifeguards, the beach is isolated and there’s a big drop near the shore.

Is parking at Kinnagoe Bay a nightmare?

It can be. A very narrow lane leads down to the beach and there’s only space for 20 or so cars. During the summer it packs out quickly, so keep that in mind.