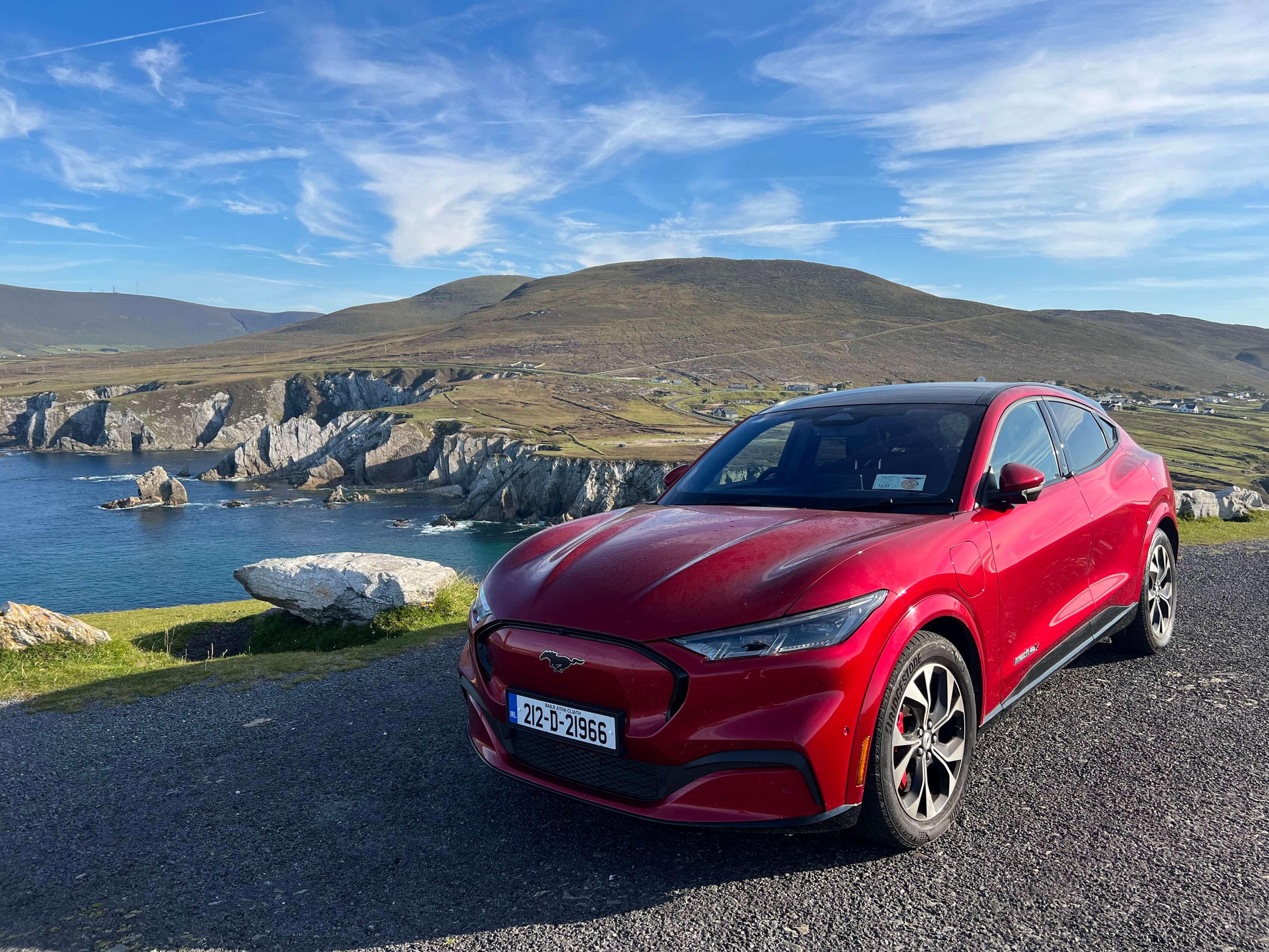 This article is sponsored by Ford Ireland

1 day is a tiny amount of time to spend in Mayo.

However, if it’s all you have to play with then the itinerary below, which uses Westport as a base and takes you around Achill, may come in handy.

This is our 4th road trip in the All-Electric Ford Mustang Mach-E (see our Wicklow road trip, our Waterford road trip and our Sligo road trip) and it was arguably the most scenic!

Some quick need-to-knows about this Mayo itinerary 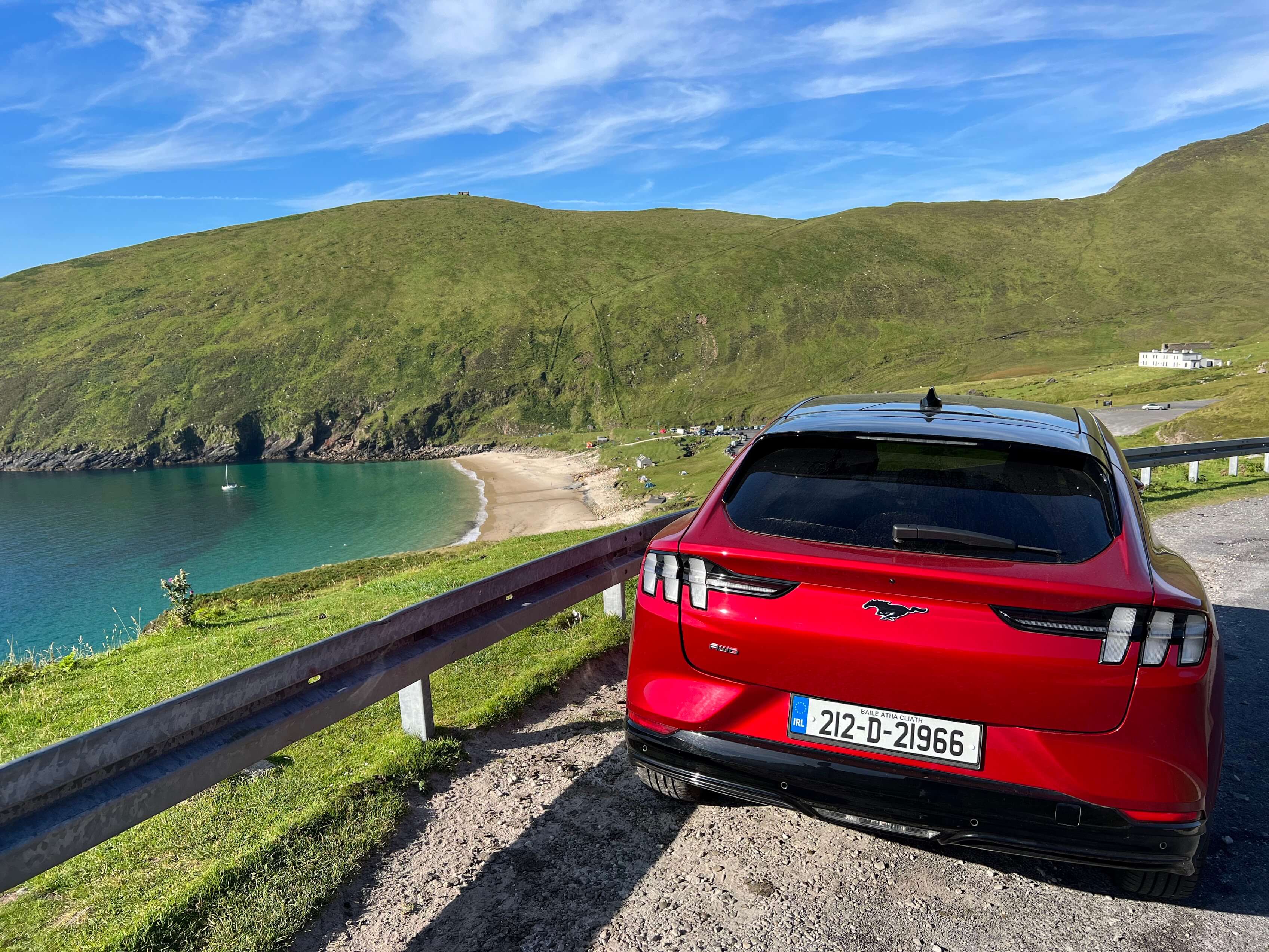 Although this Mayo road trip is fairly straightforward, there are a few need-to-knows that’ll make your visit that bit more enjoyable.

1. We started and ended in Westport

We left from Dublin the night before and used Westport as a base. You can use wherever you like but, if you’re following this itinerary, somewhere near Achill will reduce the amount you need to drive (Mulranny and Newport are two other good options!).

We landed in Mayo during the midst of a heatwave. Now, if you arrive when the weather’s bad, you may need to alter the stops. You could keep the drives and sub in the Achill Experience Aquarium along with the drive to Louisburgh and onto Leenaun via the Doolough Valley.

So, as you can see from the snap above, we did this road trip in the All-Electric Ford Mustang Mach-E. We arrived into Westport the night before and stuck the car in charge while having dinner (you can check charging progress on the Ford Pass App), so we had just over 80% charge in the battery for the morning.

If you have a Ford Mustang Mach-E you can get free access to the BlueOval™ Charge Network which gives you access and discounts at NewMotion and IONITY charging stations. It combines multiple charging networks, giving you pay-as-you-go access to more than 300,000 public charging stations across Europe – handy if you’re ever travelling on the continent!

Stop 1. Breakfast at Blasta at Ted’s 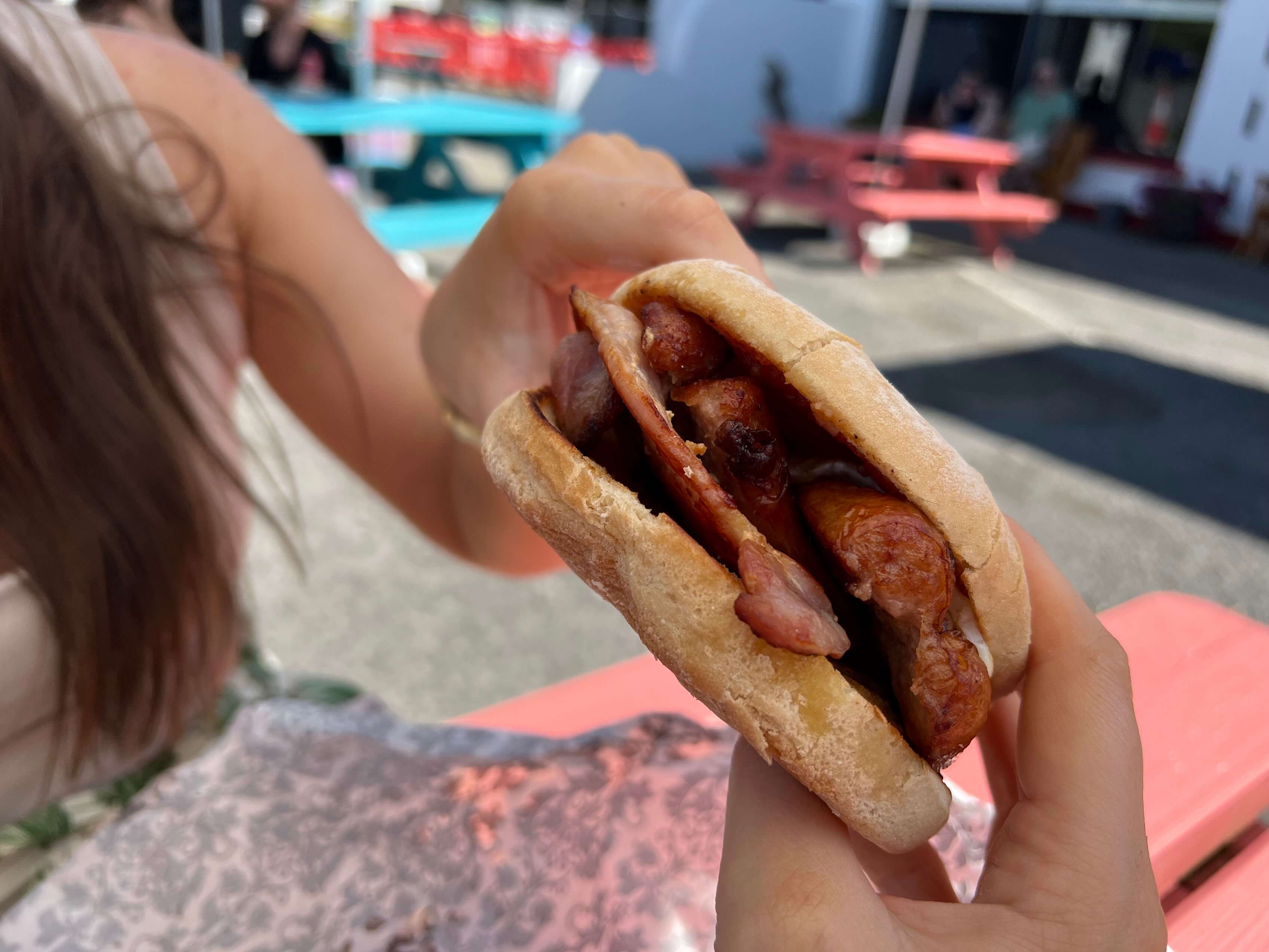 We arrived over on Achill and headed straight for Blasta at Ted’s for a bit of breakfast. This is a food truck that sits right in front of Ted’s Bar and there’s plenty of seating out front (it’s just before the Circle K).

We opted for the very tasty breakfast bap and the breakfast burrito, both of which hit the spot, along with a coffee-to-go.

When you leave Ted’s, head off in the direction of Ashleam Bay. Now, if you’re following the Atlantic Drive onto Achill, you’ll reach the viewing point above and then drive down the bendy road towards the bay.

We knew that we wouldn’t get back here again so we drove up the road to the viewing point where we were treated to glorious views of the white cliffs and bay.

We then took the road back down and on towards Keem. Doubling back on ourselves wasn’t ideal, but it was worth it in the end.

Stop 3: The coastal drive to Keem 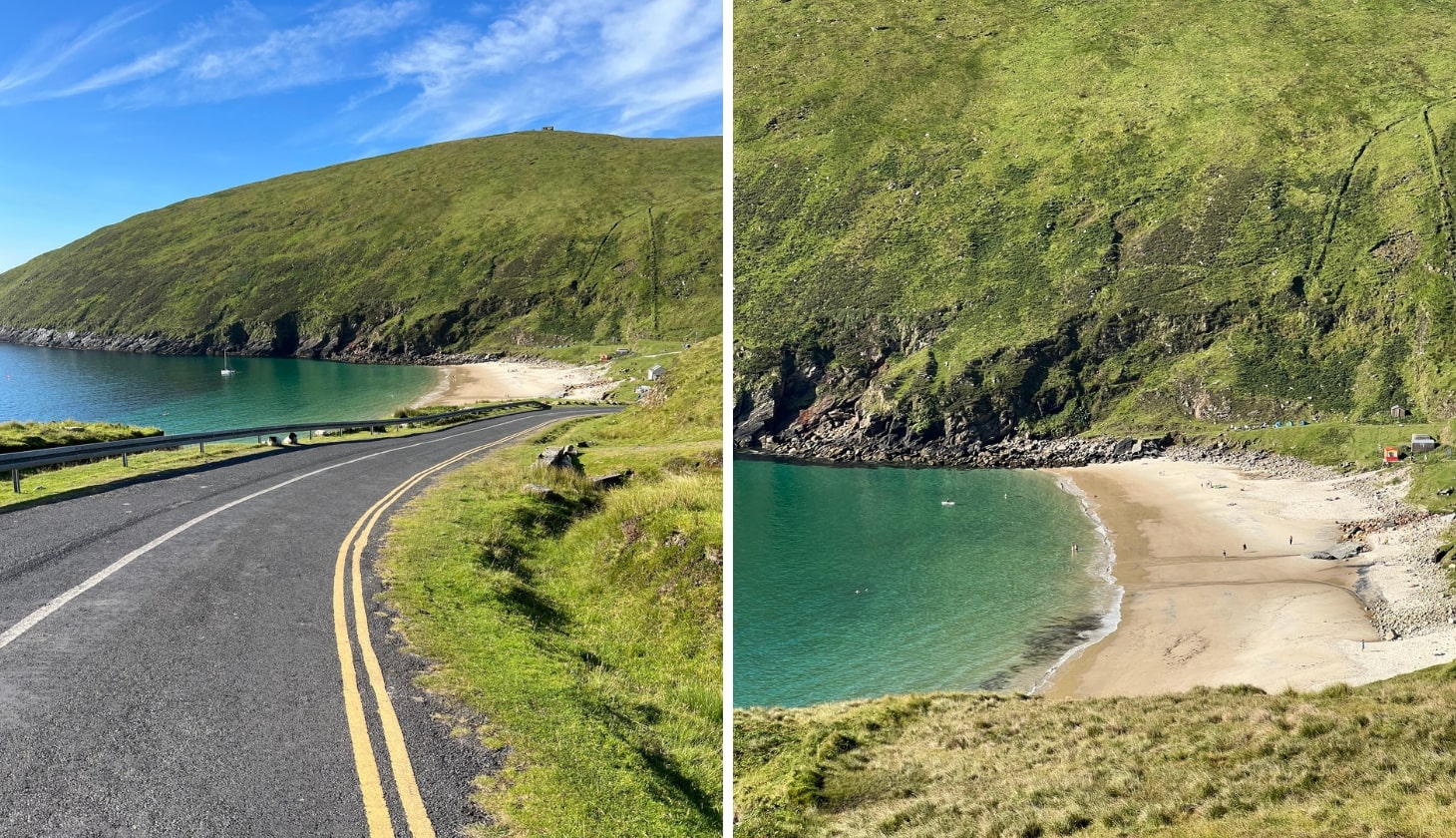 So, this isn’t really a stop, but it’s an experience and a half. After leaving Ashleam, point your nose (or in our case the Ford Mustang Mach-E’s Connected Navigation) in the direction of Keem Bay.

You’ll reach the coastal road to Keem shortly after passing Keel Beach (feel free to stop here!) and be treated to views like the one in the photos above.

This is one of the most scenic stretches of road along the Wild Atlantic Way and it’s a memorable experience regardless of the weather.

Stop 4: The hike up over Keem 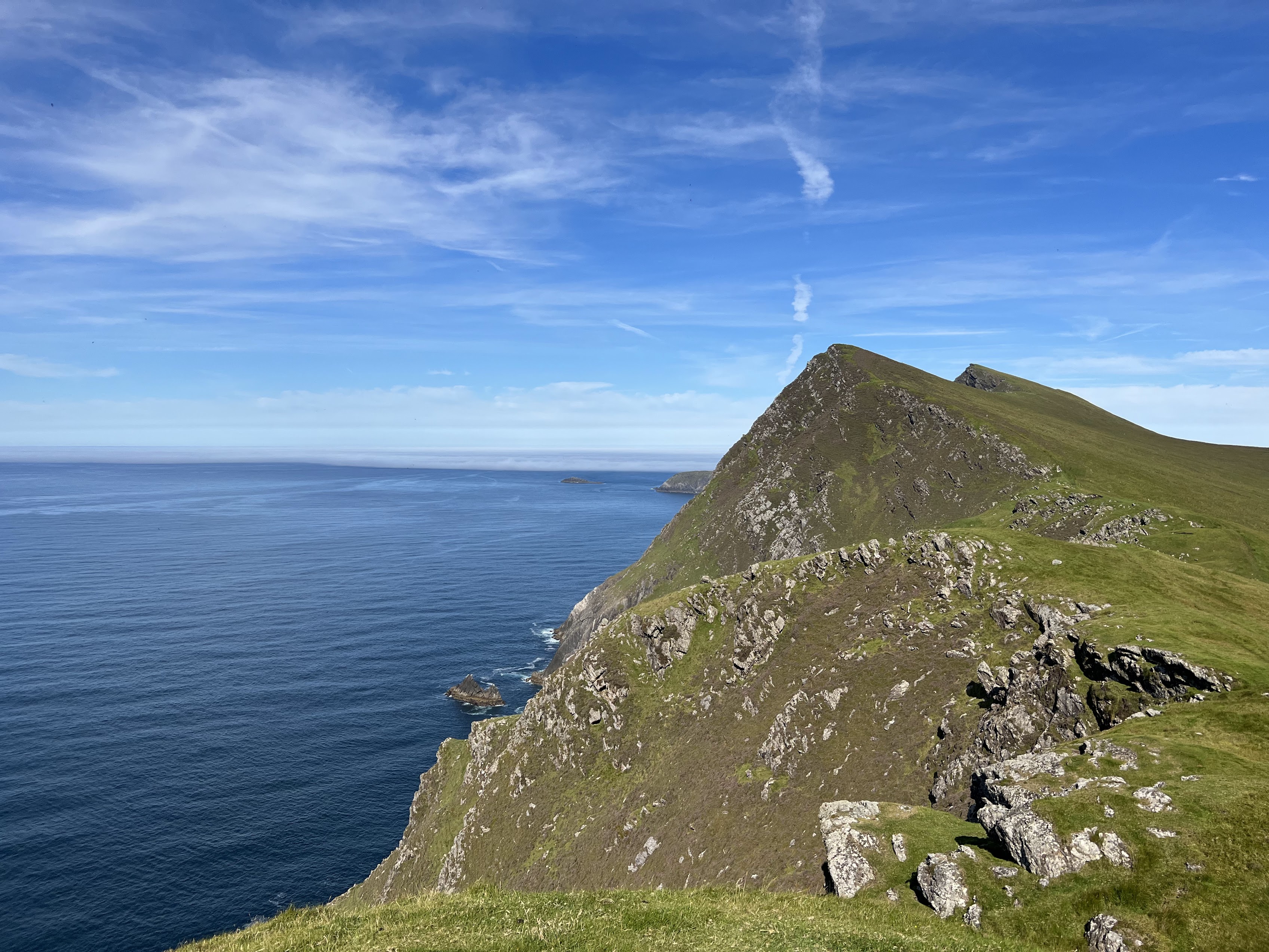 After spending around 1.5 hours in the car that morning a bit of a ramble was well and truly needed. We parked up at Keem and took the trail up to the top of the grassy hill above the bay.

Now, this trail gets insanely boggy, so hiking boots will come in handy. It’s a tough 25-minute hike to the top of the hill and the trail can be tricky to see in places (see our guide to the hike).

However, the effort is well worth it as you’re treated to mighty views of the surrounding coast along with Achill from the top. On the day we did it, we were up and down within 1 hour. 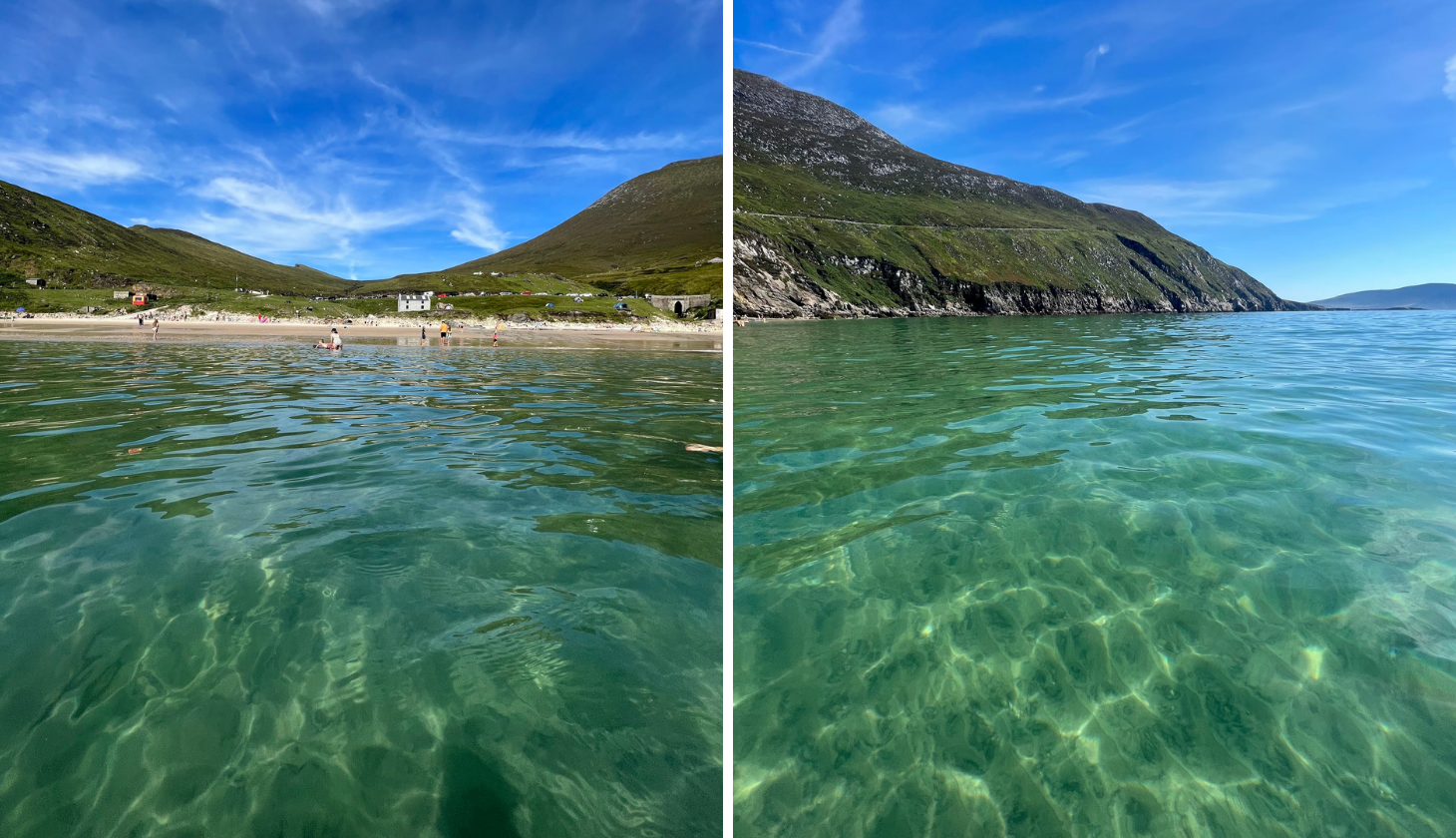 The sun was blazing down at this stage and the prospect of hopping into the sea got us through the walk back up to the car park to grab our towels. The Ford Mustang Mach-E has a feature that comes in handy in a situation like this.

I was weary about leaving the keys in a bag at the beach, so I set a pin code on the door’s e-latch system and locked the keys and our wallets inside, before strolling to the sand.

If you, like me, tend to forget pin codes and passwords, don’t worry – even if you forget the pin you can unlock the car from the FordPass app.

The water at Keem is crystal clear and, although it was freezing initially, it was beautiful after a while. We cooled off here and then headed back up to the car where we were able to unlock the door with a code and then get changed.

Another handy feature of the Mustang Mach-E is the front trunk. As there’s no engine in the car (it’s fully powered by the battery), there’s a lofty 81-litre storage compartment under the bonnet where we packed in our towels and wet gear after the dip.

Check out more about the Ford Mustang Mach-E’s features I mentioned here. 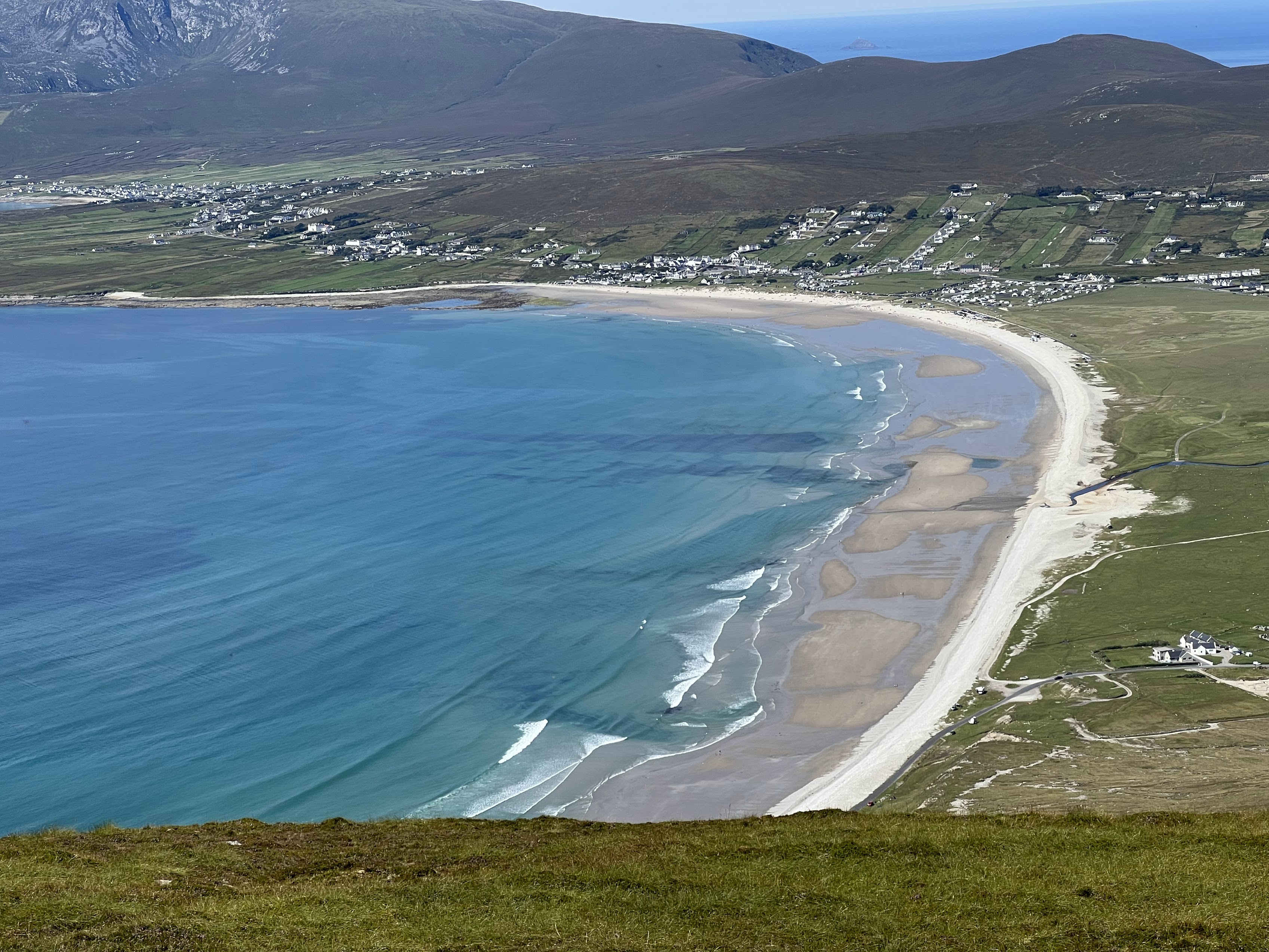 Our final pre-dinner stop took us up to the viewing point at Minaun Heights. Although I’ve visited Achill 10 – 15 times over the years I never managed to get up here.

The drive takes you up a narrow road that offers stunning mountain and sea views. After around 10 minutes you’ll reach a parking area.

You’ll find views of Keel, Keem and a good chunk of Achill on one side and there’s views of Clare Island and the coast around Louisburgh on the other.

Stop 7: Westport for the night 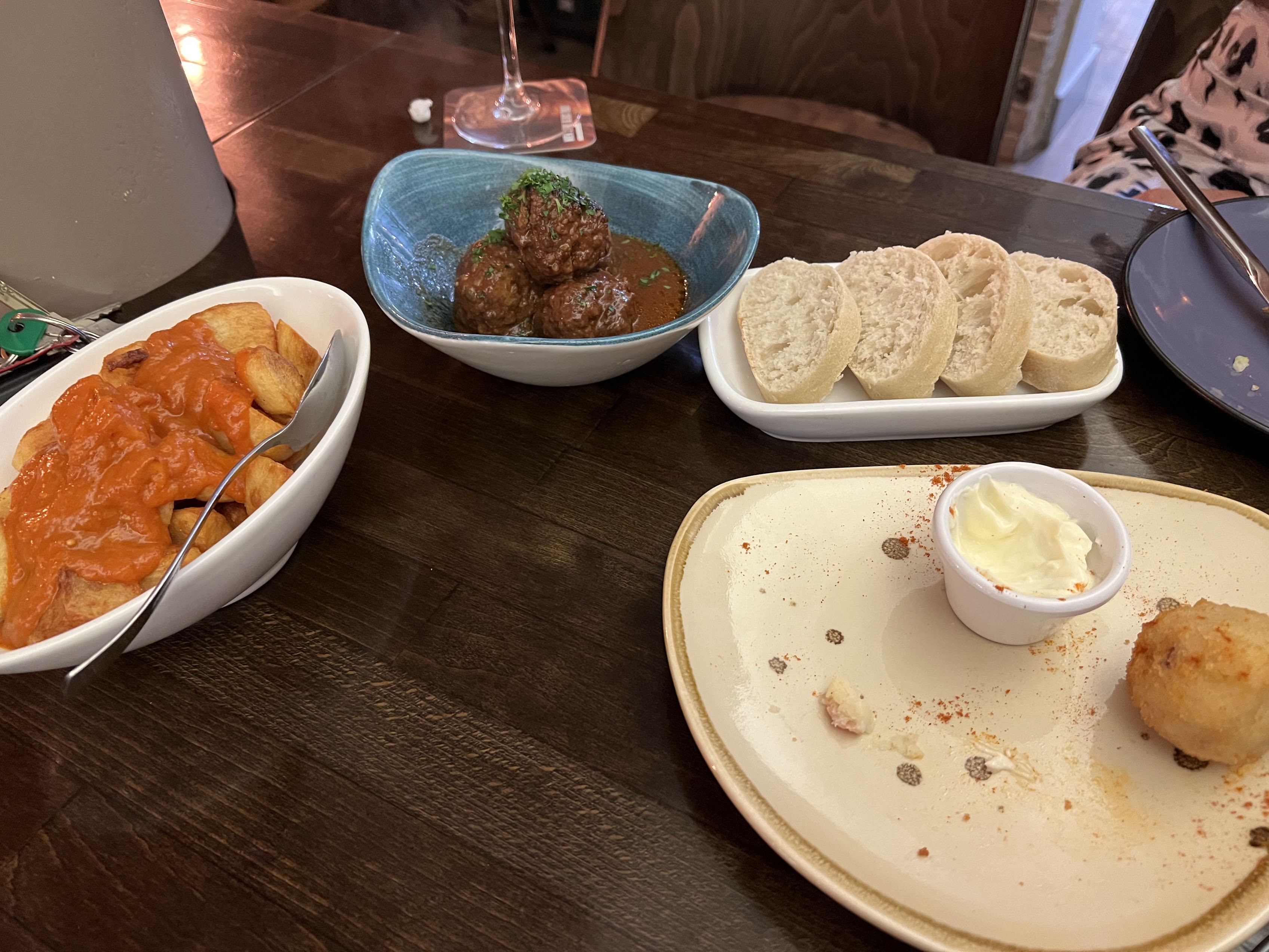 We left Achill early in the evening and nipped back to our hotel for a nap. The entire distance driven that day was roughly 160km and, as we started the day with 400km in the battery, we didn’t have to worry about charging again that night.

After freshening up and finishing all the driving for the day, it was time for a pre-dinner pint. Pub wise, you’ve endless options in Westport. Personally, I’m a fan of Toby’s, but if you’re after a bit of live music then Matt Malloy’s is a solid option.

Thankfully we had booked a table in No 8 Tapas Bar earlier in the day, as the town was packed. The only thing better than the food here is the welcome you get when you rock in. A peach of a spot!

Wrapping up our Mayo road trip

It’s hard to beat days with weather like this in Ireland. One of the beauties of Achill is that, when the sun is blazing away, you can combine a walk and a swim with ease, as there are plenty of both.

We were fortunate enough to have the All-Electric Ford Mustang Mach-E for this trip. I’ll be honest, before using an Electric Vehicle I was wary about how it’d fare out on a spin like this.

However, once you map out your route in advance and aim for 50kw and 150kw chargers, you’re laughing. You just need to have a Plan B in place each time (e.g. if we couldn’t get a charger free in Westport we would have headed to Castlebar).

Find out more about the All-Electric Ford Mustang Mach-E on Ford.ie.

**Cargo and load capacity limited by weight and weight distribution.