The mighty Murlough Bay is one of the most overlooked places to visit on the Antrim Coast.

Murlough Bay is a remote corner of Antrim with oodles of outstanding, unspoiled scenery.

The sandy bay has a backdrop of sloping hills while out to sea, panoramic views include Rathlin Island and the Kintyre Peninsula.

Below, you’ll find info on everything from where to park for the Murlough Bay walk to what to see when you get there.

Some quick need-to-knows about Murlough Bay in Northern Ireland 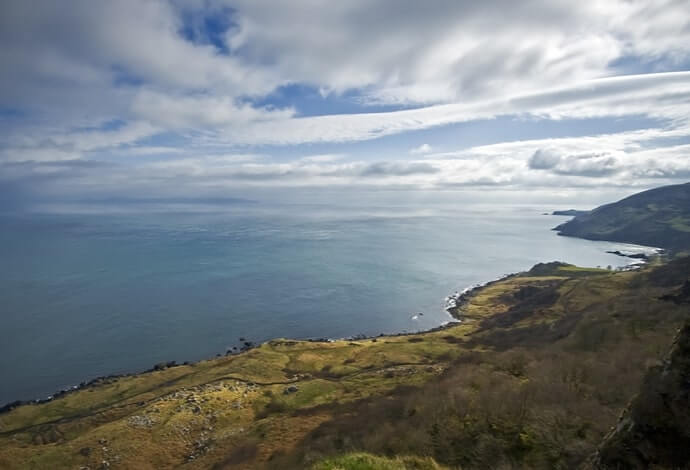 A visit to Murlough Bay near Ballycastle isn’t as straightforward as a visit to the likes of the Giant’s Causeway or the Carrick-a-rede rope bridge. Here’s some need-to-knows:

Located on the northeast coast of Northern Ireland, Murlough Bay is situated between Ballycastle and Torr Head. It is one of Northern Ireland’s most beautiful bays but due to its remote location you can often have it all to yourself.

There’s a nice big parking area serving Murlough Bay and it’s next to the road and right on the clifftop. You can’t miss it! See ‘B’ on our Google Map below.

Many visitors are speechless when they first arrive and see the bay. It’s a breathtaking wonder of nature with a wild, untouched feel about it. Backed by sloping hillside and steep rock faces, boulders give way to golden sand at low tide. As you look out across the bay, you can see Rathlin Island and the Mull of Kintyre (Scotland) in the distance.

The road to Murlough Bay is very steep and winding with many blind corners and tight bends. Drivers need to drive slowly and concentrate on the road, not the view! It’s a beautiful spot for hiking but you should be aware that the phone signal can be patchy, so take extra care.

Known for its unspoiled surroundings, Murlough Bay near Ballycastle is exceptionally beautiful and remote. Out to sea, it provides views of Rathlin Island, the Mull of Kintyre and the peaks of Arran in the distance.

The green-covered hillside has exposed rocks of basalt overlaying sandstone and limestone. There are many long-forgotten lime kilns in the area.

In the 18th and 19th centuries, they were used to produce quicklime from limestone, which was required for building and agricultural practices.

In Gaelic, Murlough (Bay) was known as Muir-bolc or Murlach which means “sea inlet”, hence it’s a popular name for bays in other counties.

Murlough Bay is recorded as the place where St Colomba arrived after sailing from Iona in 595AD. He must have faced quite a climb!

More recently, it was the chosen resting place of Roger Casemont, a British diplomat turned Irish revolutionary who was executed in 1916. Although his remains are buried in Dublin, a plinth shows where a cross was erected to commemorate his life.

Above, you’ll find a rough outline of one of the walks at Murlugh Bay in Antrim. As you can see, this route is fairly straightforward. Here are some need-to-knows about the walk.

There are many walks around Murlough Bay, but we’re focusing on a shorter 4.4km hike as it’s one that we are most familiar with. It takes at least an hour, especially if you allow for catching your breath or just gazing at the stunning coastal views.

The walk is do-able for anyone with a reasonable level of fitness. The toughest part is on the way back up as it’s quite a steep climb as it zig-zags up the hillside.

There’s a nice viewpoint near where the road does a hairpin bend before it heads southeast towards the coast, ending at another small car park. (We don’t recommend parking here as the road is very narrow and steep; it may require reversing some distance if you meet traffic going in the opposite direction).

Getting into the belly of the walk

At times you’ll be walking on steep slopes, so good footwear is essential. Continue along the top of the cliffs and keep a lookout for buzzards, peregrine falcons, eider ducks and fulmars skimming the waves.

As you follow the lane down you’ll pass a concrete plinth marking the site of a cross on the a pilgrims’ trail from the Old Church of Drumnakill.

More recently it held a memorial cross to commemorate Sir Roger Casement who requested his body be buried in the old churchyard at Mullough Bay, now a ruin.

The path descends quite steeply at the end onto Torr Head Beach which is awe-inspiring. The return hike is the same way.

As you gaze down onto Murlough Bay, it may seem strangely familiar, especially of you are a Game of Thrones fan. In fact, the bay was used as a film location where Davos Seaworth was shipwrecked and later rescued following the Battle of Blackwater Bay.

The setting was also used as the fictional Slavers Bay on Essos. Remember when Tyrion Lannister and Ser Jorah Mormont are taken prisoner as they walk towards Mereen and are spotted by a passing slave ship?

The rugged hillside and rock faces overlooking the bay was the site of Renly Baratheon’s camp in the Stormlands. It’s a spectacular setting for any film or real life drama!

Things to do near Murlough Bay

One of the beauties of Murlough Bay is that it’s a short spin away from many of the best things to do in Antrim.

Below, you’ll find a handful of things to see and do a stone’s throw from Murlough (plus places to eat and where to grab a post-adventure pint!). 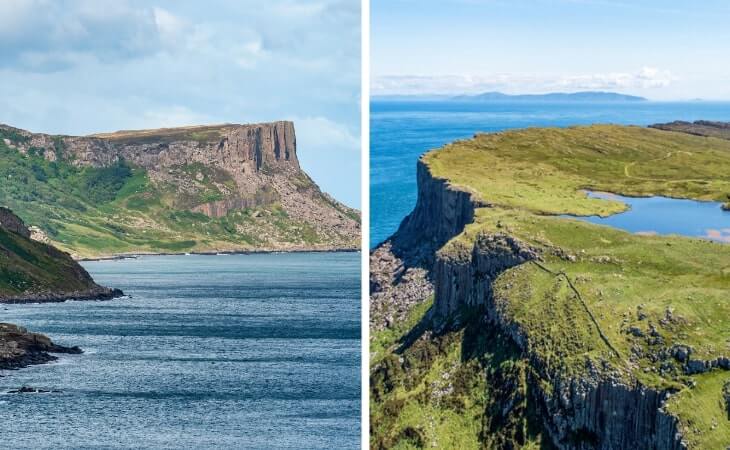 Fair Head is northwest of Murlough Bay and the headland is the closest point to Rathlin Island. The cliffs rise to a height of 196m (643 feet) above the sea and can be seen for miles. It’s a popular area with rock climbers, offering dozens of single-pitch climbs, crags and abseiling opportunities. 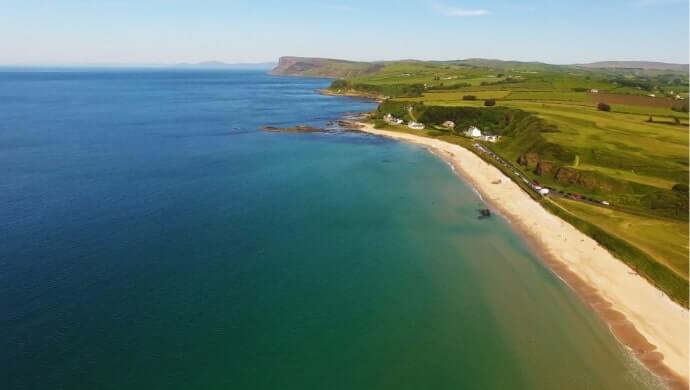 The pretty coastal town of Ballycastle is the eastern gateway to the Causeway Coast. Home to around 5,000 people, the seaside resort has a harbour with regular ferries to Rathlin Island. There’s plenty of things to do in Ballycastle, from Ballycastle Beach to the many restaurants in the town.

Taking in some of the best coastal scenery in Northern Ireland, the Causeway Coast Route connects Belfast with Derry. Rolling glens, clifftops, sandy coves and sea arches contrast with popular attractions including the Giant’s Causeway, Dunluce Castle ruins and the Carrick-a-Rede rope bridge.

We’ve had a lot of questions over the years asking about everything from whether or not Murlough Bay in Northern Ireland is worth visiting to what there is to see there.

Is Murlough Bay in Antrim worth visiting?

Yes! This is one of several gems tucked away along the Causeway Coast and it’s well worth a visit, especially if you’re up for a ramble!

Is there parking at Murlough Bay in Northern Ireland?

Yep! If you look at our Murlough Bay map above, you’ll find the parking area (marked with a ‘B’).

What is there to do at Murlough Bay near Ballycastle?

You can head on the walk outlined above or you can just drive to the viewing point and soak up the stunning views.