The tall bronze Daniel O’Connell statue has been looking over the Liffey and the same bridge that bears his name for over 130 years.

Known as the O’Connell Monument, you’ll find it on O’Connell Street, a stone’s throw from The GPO, The Spire and the Ha’penny Bridge.

But who was this hero who earned the swashbuckling nickname ‘The Liberator’? That’s what we’re here to explore, so read on to hear his extraordinary story!

Some quick need-to-knows about the O’Connell Monument 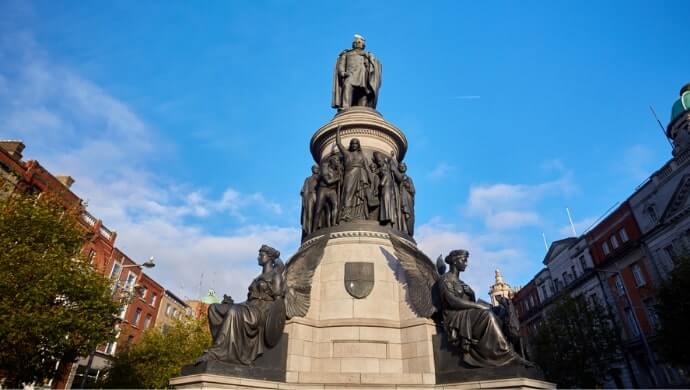 Although a visit to the O’Connell statue is fairly straightforward, there are a few need-to-knows that’ll make your visit that bit more enjoyable.

The immense statue sits at the bottom of O’Connell Street and directly faces the south side of Dublin. It’s easily reached on foot from central Dublin and a ton of buses go past it each day, as well as the LUAS tram. Basically, if you walk in the direction of The Spire, you’ll find the O’Connell Monument!

To earn a monument of this kind of prestige, you must have done a few important things, right? Growing up during the regressive Penal Laws era of Irish history, O’Connell was the acknowledged political leader of Ireland’s Roman Catholic majority in the first half of the 19th century and his tireless work lead to the Catholic Emancipation of 1829

Designed by one of the finest sculptures of his day, the O’Connell monument was always in good hands. Other significant works by John Henry Foley include the Albert Memorial in London’s Hyde Park and the statue of Benjamin Guinness in the grounds of St Patrick’s Cathedral, Dublin. Sadly, Foley died in 1874 and never saw the completed O’Connell Monument

Unfortunately, the O’Connell Monument was in the wrong place at the wrong time during the 1916 Easter Rising and was peppered with bullets from British machine guns, the holes of which are still visible today. Maybe it was poetic justice that even years after his death, he was still able to defend Ireland from British oppression?!

So, who actually was Daniel O’Connell? 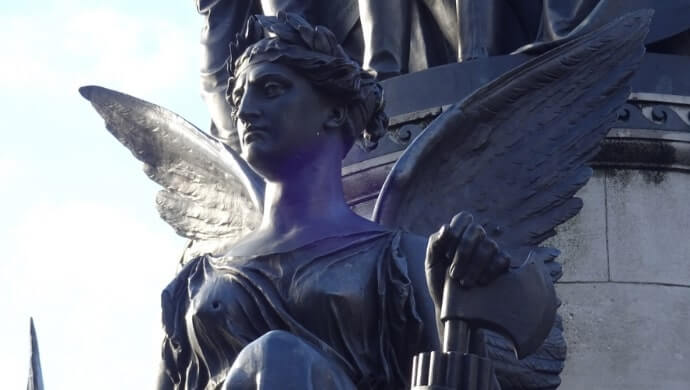 Born into a wealthy catholic family in County Kerry in1775, O’Connell’s family should have lost their land thanks to the Penal Laws but had been able to retain it thanks to Protestant trustees and the forbearance of their Protestant neighbours.

Years later, this upbringing gave him a solid base to put all his fight and passion into reclaiming the rights of Catholics. In Dublin, he defended Catholics ferociously and raised them from their knees in 1829 when he hugely contributed to the Catholic Emancipation Act.

Having studied in France during the time of the bloody Revolution, the horrors he saw there gave him a lifelong aversion to mob rule and violence. If he was going to enact a change, it would be through dialogue and peaceful methods only.

He even spoke about this conviction, saying: “Not for all the universe contains would I, in the struggle for what I conceive my country’s cause, consent to the effusion of a single drop of blood, except my own.” You can’t really knock the guy, can you?!

For a religious man born into a particularly conservative era of history, O’Connell was pretty forward-thinking and strong in his convictions. For example, he believed in a separation of church and state and was highly dismissive of any suggestion that he would get his politics from Rome.

He was also one of the world’s most outspoken campaigners to abolish slavery at a time when vast fortunes were being made from the slave trade. O’Connell never once visited the United States, precisely because it was a slave-owning country.

About the O’Connell statue 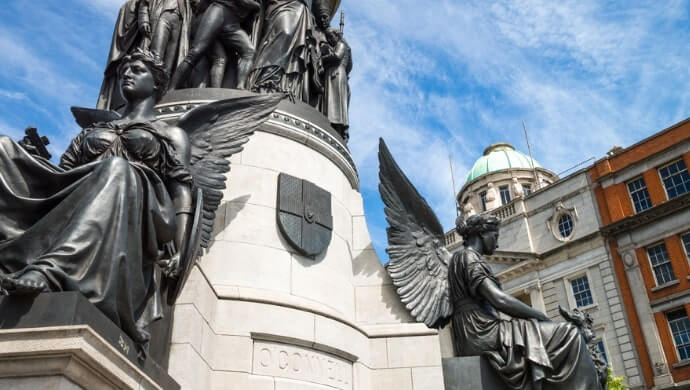 The O’Connell statue is one of the most prominent monuments of O’Connell Street, however, many visiting the area tend to miss it.

They also miss the bullet holes that can be still seen to this day. Here’s some need-to-knows about it.

Consisting of three bronze sections separated by an enormous granite plinth, the monument is 40ft-high with O’Connell facing across Liffey towards Dublin’s southside.

Taking pride of place at the top of the monument is O’Connell himself wearing a large cloak and with a small pile of books at his feet.

Beneath him is a circular cluster of over 30 statues thought to represent the people of Ireland and led by the ‘Maid of Erin. The lower tier of the monument features four winged Victories said to represent a virtue embodied by O’Connell: courage, fidelity, patriotism, and eloquence.

Less than 20 years after the death of O’Connell, it was suggested that perhaps there should be a statue of the auld fella built somewhere in Dublin.

Though now based in London, John Henry Foley was a fine Dublin sculptor and was selected for the job although I’m sure he didn’t expect it to take as long as it did to get built!

The granite foundation stone was laid in 1864 and Foley was engaged with the project for the rest of his life up until his death in 1874. Perhaps a closer look at the distinct number of figures in the middle section of the monument goes some way to explain why it took so long to complete.

Detailed renderings of representatives of Irish society include a bishop with his crosier, a workman with his hoe and a bewigged lawyer

His esteemed pupil Thomas Brock eventually finished the ornate monument and it was unveiled to the public on August 15th, 1882.

Things to see near the O’Connell Monument

The O’Connell statue is a stone’s throw from many of the best things to do in Dublin, so you can combine a visit to it with many nearby attractions.

Below, you’ll find everywhere from the GPO and the beautiful Ha’penny Bridge to where to grab a bite to eat. 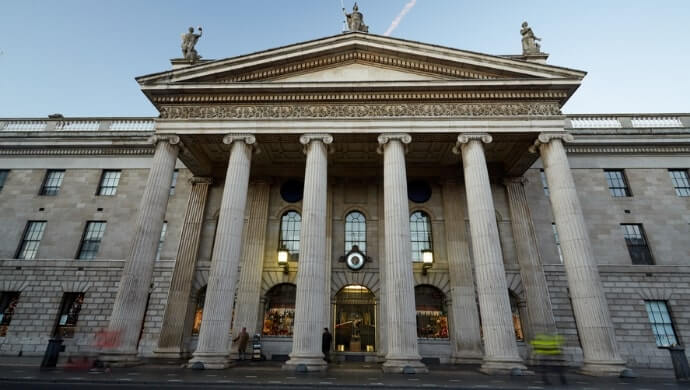 Designed by Francis Johnston and completed in 1814, the General Post Office looks far too elegant to be involved in violence but violence came to it in 1916 when it became the headquarters of the leaders of the Easter Rising. Riddled with British bullets on its grand columns, the GPO is now an iconic part of O’Connell Street and Dublin itself.

Now over 200 years old, the Ha’penny Bridge crossing the Liffey is an elegant pedestrian bridge that’s a 5-minute walk west along the river from the O’Connell Monument. Made of cast iron and built in 1816, it’s absolutely the classiest way to enter Temple Bar (if there is such a thing!).

With its handy central location, there are loads of other Dublin attractions to check out within a short walk or a tram or taxi ride. Whether you want to learn about the city’s most famous export at the Guinness Storehouse or go for a bucolic stroll through St Stephen’s Green, there’s plenty of entertaining directions to head when leaving the O’Connell Monument. 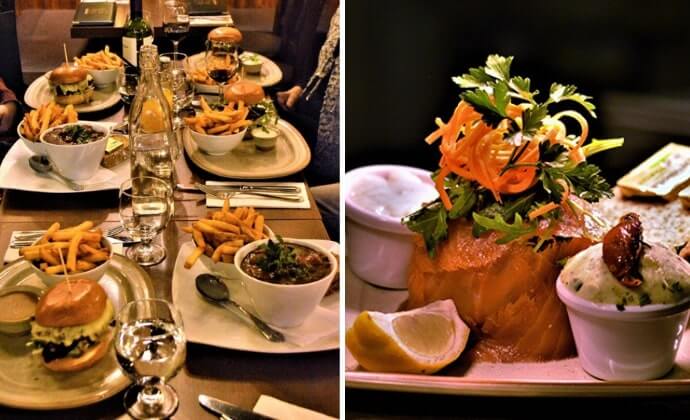 Located just north of the famous Temple Bar area, there’s a plethora of pubs, bars and restaurants to get stuck into when you’ve finished at the O’Connell Monument. Here are some guides to nip into:

FAQs about the O’Connell statue

We’ve had a lot of questions over the years asking about everything from ‘When was the O’Connell monument built?’ to ‘Who designed the O’Connell statue?’.

Are there really bullet holes in the O’Connell statue?

Yes – the O’Connell Monument has visible bullet holes that were made during the 1916 Easter Rising.

Who was Daniel O’Connell?

Growing up during the regressive Penal Laws era of Irish history, O’Connell was the acknowledged political leader of Ireland’s Roman Catholic majority.