The Ha’penny Bridge is arguably one of the more iconic attractions in Dublin.

You’ll find it a stone’s throw from O’Connell Street, where it connects Ormond Quay Lower to Wellington Quay.

It was constructed from iron in 1816 and cost £3,000 to build. In the early days, it acted as a tool bridge and people were charged a ha’penny to cross.

In the guide below, you’ll find the history of the bridge, some quirky tales and a clatter of Ha’penny Bridge facts, too.

Although a visit to the Ha’penny Bridge is fairly straightforward, there are a few need-to-knows that’ll make your visit that bit more enjoyable.

You’ll find the Ha’penny Bridge near O’Connell Street, where it connects Ormond Quay Lower to Wellington Quay. It’s a tiny bridge, but it’s a slice of ‘old-world’ Dublin that still stands proud amongst all of ‘the new’.

Although the bridge is a tourist attraction, it’s mainly used by those looking to cross from one side of the River Liffey to the other. It’s said that around 30,000 people cross it every day.

A visit to the Ha’penny Bridge is likely to be a quick one. However, it’s well worth visiting and it’s a short walk from the likes of Temple Bar, The GPO, The Spire and the O’Connell Monument.

The History of the Ha’penny Bridge

Many moons before the Ha’penny Bridge was built, there were seven ferries (yes, seven!) that took people across the river Liffey and each was operated by a man named William Walsh.

It all started with an ultimatum

In the early 1800s, good aul Willy was given a bit of a shock when he was told that the condition of ferries weren’t suitable for taking people across the rivers murky waters.

He was given an ultimatum – either refurbish the ferries to a condition fit for the public or build a bridge across the river. *Spoiler alert* – he built the bridge.

And sure why wouldn’t he?! Especially when you consider that he was given a contract to charge a toll from anyone who crossed the bridge for a whopping 100 years.

The Ha’penny Bridge was constructed in Coalbrookdale in Shropshire, the firstcentere of iron casting in Britain, and cost £3,000.

Christened the Wellington Bridge after the Duke of Wellington, a native Dubliner who won the Battle of Waterloo a year previous, it was and still is referred to by locals as the Ha’penny Bridge.

The price of crossing the bridge was a ha’penny. For a while, the toll was increased to a Penny Ha’penny, but eventually, the powers that be saw the light and dropped it in 1919.

Its official name is now ‘the Liffey Bridge’, but you’d be hard done by to find someone refer to it as such.

It stood proudly in its original state defying the test of time, heavy usage and a shed-load of wind and rain, up until 1998 when a Dublin City Council assessment called for refurbishment.

The refurbishment saw the Ha’penny Bridge tented and a temporary bailey bridge erected in its place. Over 1000 individual rail pieces were labelled, removed and sent to Northern Ireland where they were repaired and restored with such skill that 85% of the original rail-work was retained.

One of my favourite tales about the Ha’penny Bridge 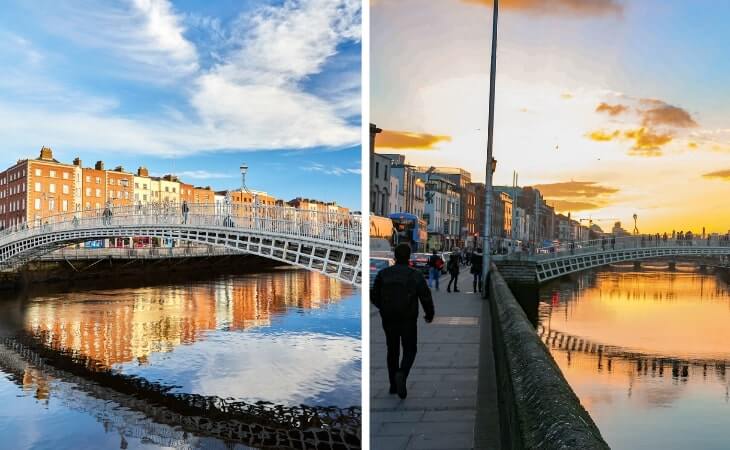 The lads over at Come Here To Me! tell a great story about toll dodging at the bridge during the 1916 Easter Rising when a group of Volunteers made their way to Dublin from County Kildare.

On their travels, they needed to get from one side of the Liffey to the next and decided their quickest route would take them over the Ha’penny, however, they didn’t plan on shelling out for the toll.

“I went down the laneway we had earlier traversed and there was a good deal of rifle fire. I saw no enemy as I came out on the quays at the Metal Bridge. There was the toll collector, who demanded a halfpenny.

Having seen O’Kelly succeed in gaining passage by presenting his revolver, I followed suit and I was allowed to pass. I traveled down the quays to O’Connell Bridge.”

Things to do near the Ha’penny Bridge

One of the beauties of the Ha’penny Bridge is that it’s a short spin away from many of the best places to visit in Dublin.

Below, you’ll find a handful of things to see and do a stone’s throw from the Ha’penny Bridge (plus places to eat and where to grab a post-adventure pint!). 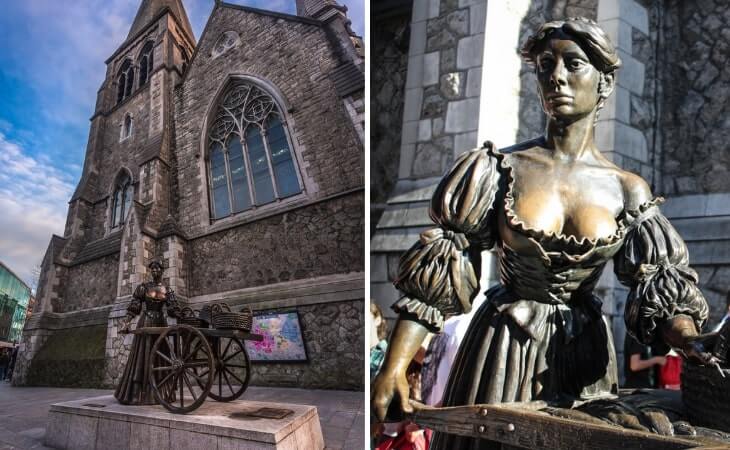 FAQs about the Ha’penny Bridge in Dublin

We’ve had a lot of questions over the years asking about everything from ‘Can I leave a love lock on the bridge?’ (no) to ‘What is there to do nearby?’.

What is it called the Ha’penny Bridge?

The name comes from a time when those that crossed the bridge were charged a toll. The cost to cross the bridge was a ha’penny.

How old is the Ha’penny Bridge in Dublin?

The bridge dates back to 1816 and, even though extensive renovation work was done to it, much of the old steel-work remains.