The mighty Sligo Abbey is a fine place to explore if you’re staying in Sligo Town.

One of the more iconic of the many Sligo attractions, Sligo Abbey dates back to the mid-13th century.

And although it has experienced its fair share of trouble and turmoil over the years, much of the building remains to tell its tale.

In the guide below, you’ll find everything from where to park when visiting, plus what to expect on the tour.

Some quick need-to-knows about Sligo Abbey 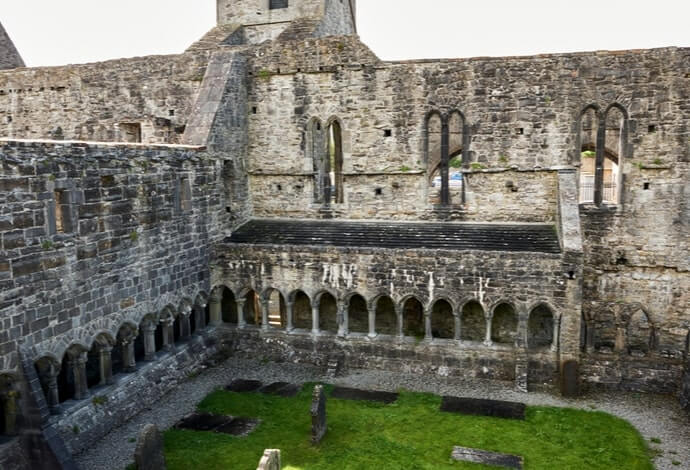 Although a visit to Sligo Abbey is fairly straightforward, there are a few need-to-knows that’ll make your visit that bit more enjoyable.

You will find the abbey in Sligo Town on the aptly names Abbey Street. Although there’s some on-street parking next to it, there’s big car park across from it, too (paid parking).

Sligo Abbey is open every day from 10 to 5.15pm. Admission costs are adults €5, group/seniors €4, children/students €3 and a family ticket for €13 (prices may change).

The Abbey was founded by Maurice Fitzgerald in 1253, himself the founder of the town of Sligo. It is of the Romanesque style, with other additions and alterations added in later years. Much of the building remains, particularly the church and the cloister.

The famous Irish poet, William Butler Yeats is closely associated with the county of Sligo. He used the Abbey in two short stories – The Crucifixion of the Outcast and The Curse of the Fires and of the Shadows. Yeats is buried in nearby Drumcliffe Church.

A brief history of Sligo Abbey 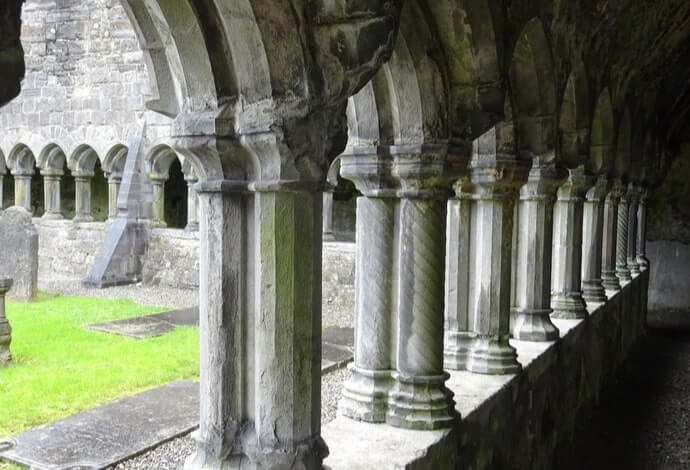 Sligo Abbey began its life as a Dominican Friary and it was led by a prior and not an abbot. Maurice Fitzgerald was a Justiciar of Ireland, whose motive for founding the abbey was supposed to be in order to create a community of monks to pray for Richard Marshall, 3rd Earl of Pembroke—a man he was said to have killed.

The Norman abbey was endowed with lands and partially destroyed by an accidental fire in 1414, later rebuilt in 1416.  By the time the dissolution of the monasteries began in the 16th century, Sligo Abbey was granted an exemption in 1568 on the condition that the monks became secular priests.

During Tyrone’s Rebellion at the end of the 16th century, the abbey was damaged and in the early 16th century, given to Sir William Taaffe in recognition of his services to Queen Elizabeth I.

It was again attacked during the Irish Confederate Wars in the mid-17th century. The Dominicans finally left in 1698 after the Irish Parliament passed the Banishment Act, ordering all monks to leave the country. Friars returned to Sligo in the 18th century, and new buildings were added but it gradually fell into ruin over the course of the 19th century.

Things to look out for at Sligo Abbey 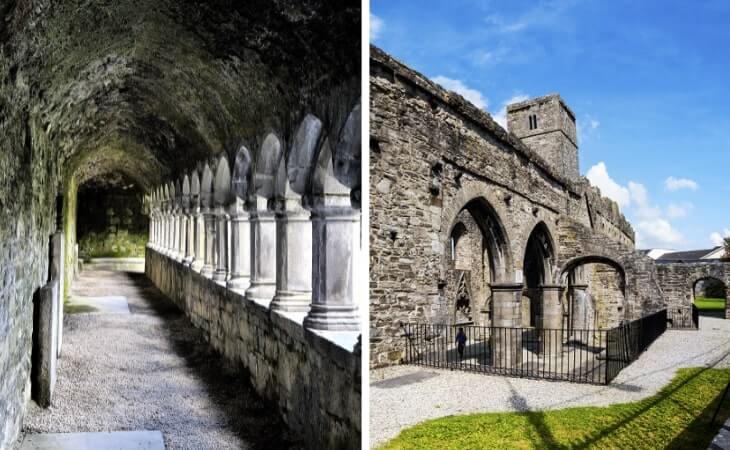 If you head off on the Sligo Abbey tour, there’s plenty to keep you busy, from the story of the abbey to the architecture and some very unique attractions in the visitor centre.

The walls of the church, the tower and the sacristy, the refectory, the chapter toom and the dormitories that remain seem to date to the 13th century, when the abbey was built in the Norman style.

There are two funeral monuments in the church that are worth noting. The O’Craian altar tomb, the oldest surviving monument in the church, is one of them. The Latin inscription date is 1506 and it is the tomb of Cormac O’Craian and his wife Johanna, daughter of Ennis (or Magennis).

The other is the O’Connor mural to the right of the altar, which shows O’Connor and his wife kneeling in prayer. Sir Donogh O’Connor gained the exemption that prevented the dissolution of the abbey. The monument was erected in 1624 by O’Connor’s wife, Eleanor.

In the Visitor Centre, you will find a copy of Charlotte Thornley’s Diary. Charlotte Thornley was the mother of Dracula author, Bram Stoker, and she and her son lived in Sligo during the cholera epidemic of 1832.

In her diary, Charlotte talks of the living struggling to bury the dead, and it is thought that bodies were piled on top of the 15th century altar, as it was the only sacred place remaining in the area.

Things to do near Sligo Abbey

One of the beauties of Sligo Abbey is that it’s a short spin away from some of the best places to visit in Sligo (there are also some great restaurants in Sligo worth nipping into!).

Below, you’ll find a handful of things to see and do a stone’s throw from Sligo Abbey, from more historical sites to hikes, walks and beautiful beaches. 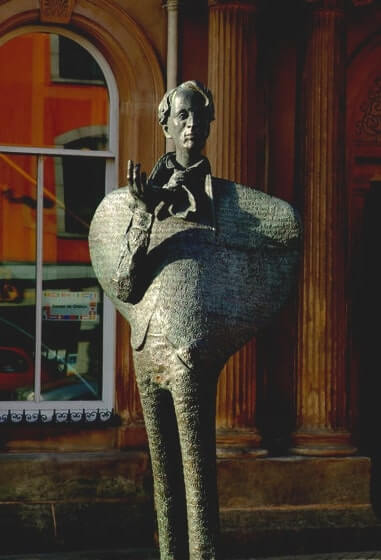 This beautiful 19th century red brick building is the home of the Yeats Society in Sligo. It supports local community art and is the headquarters of the International Yeats Society. The building has a permanent exhibition dedicated to Yeats’ life and works. 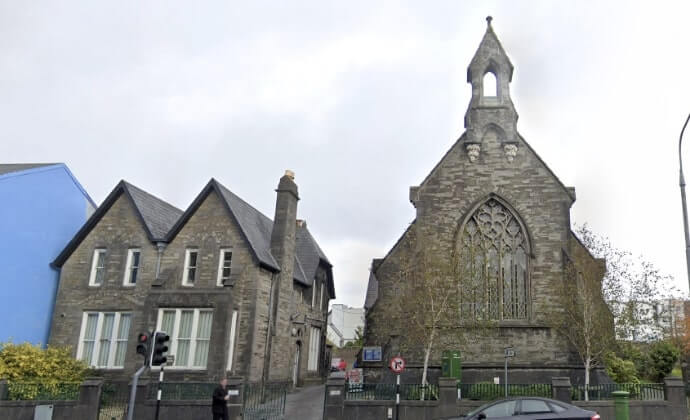 Situated in the Sligo town, the museum contains collections of exhibits including those detailing its stone age history, and manuscripts, photographs and letters relating to WB Yeats.

3. Heaps of nearby attractions 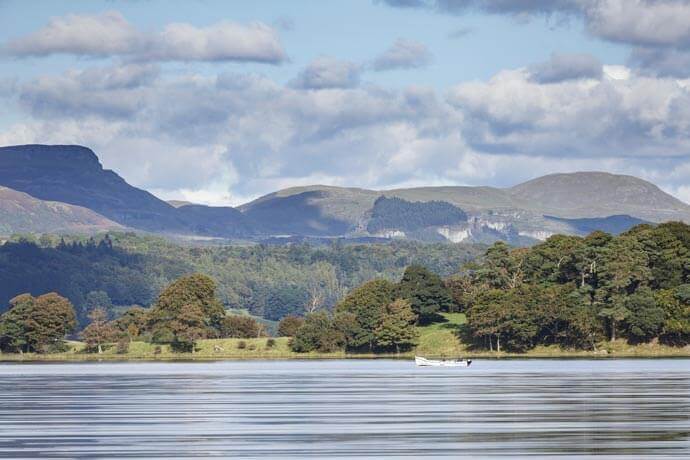 One of the beauties of Sligo Town is that it’s close to many of the best things to do in Sligo. Here are our favourite nearby attractions:

We’ve had a lot of questions over the years asking about everything from is Sligo Abbey worth visiting to what to see nearby.

Is Sligo Abbey worth visiting?

Yes. Sligo Abbey is packed with history and you’ll get a great insight into its history on the tour.

When is Sligo Abbey open?

Sligo Abbey is open every day from 10 to 5.15pm (note: opening hours for the Abbey may change, so check in advance).

How much is it into Sligo Abbey?

Admission costs are adults €5, group/seniors €4, children/students €3 and a family ticket for €13 (prices may change).