If you’re in search of the best things to do in Tralee, you’ve landed in the right place.

Although towns like Dingle, Kenmare and Killarney tend to get all of the attention from those visiting Kerry, it would be a mistake to skip its historic county town of Tralee.

Founded in the 13th century, Tralee has had an eventful life, particularly during the Irish War of Independence.

The best things to do in Tralee

The lively town of Tralee in County Kerry is arguably best known for the now-iconic Rose of Tralee Festival, which has been taken place since 1959.

However, there’s plenty more Tralee attractions than its famous festival and its many buzzy pubs – the town has plenty of attractions to keep locals and tourists alike amused.

1. Start your visit with something tasty from Yummy Cafe Market

If you’re wondering what to do in Tralee that’ll get you fired up for a day of exploring, nip into Yummy Cafe and grab something tasty to-go.

You’ll find this place tucked down a side street in the middle of town where its rustic interior boasts plenty of character.

They’re open for breakfast and lunch with two separate menus for both meals. Get in and make your belly happy!

It’s one thing to see the beauty of Kerry; it’s another to truly know about Kerry. Opened in 1991, Kerry County Museum has been one of the top things to do in Tralee for over 30 years.

Housed in the Ashe Memorial Hall in the centre of town, the award-winning museum covers Kerry history from the bronze age to the present day.

One of the best exhibits is the duelling pistols used by 19th-century politician Daniel O’Connell, also known by the rather cool nickname ‘The Liberator’.

If you’re wondering what to do in Tralee when it’s raining, pop Kerry County Museum on you to-visit-sharpish list.

The Eco-tourism wave that’s taking many parts of the world by storm is very 21st century and they’re fully embracing it over in Tralee.

Located on the fringes of town, Tralee Bay Wetlands Eco & Activity Park is a unique escape that’s over 3,000 hectares in size.

Explore the flora and fauna of the area on a boat tour, a boardwalk or from the 20-metre high viewing tower.

There’s also plenty of activities for more active visitors, including a climbing wall and water zorbing, which make it one of the best things to do in Tralee with kids.

This place will suit those of you looking for things to do in Tralee with kids or a large group of friends. 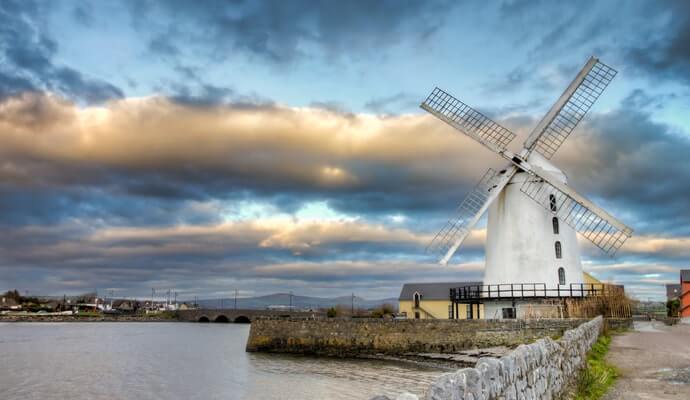 Photo via Lukasz Pajor on shutterstock.com

Constructed in 1800 but rendered obsolete by various technological advances within 100 years, it fell into disrepair in the 20th century but was lovingly restored during the 1980s and reopened in 1990.

21 metres high and notable for being the only windmill on the Wild Atlantic Way, arrive late in the day for some cracking sunset photo opportunities.

5. Make your belly happy at Croi

If you’ve nipped into our guide to the best restaurants in Tralee, you’ll know this lively little town is home to some fine places to eat.

Croi is one of our favourites. The cosy candlelit tables offer the perfect atmosphere for intimate dinners with family and friends while the meals are impeccably presented.

Popular choices from this place are the fillet steak, pan seared scallops and duck breast. Don’t worry if you’re vegetarian though because they also have a great dedicated menu for meat-free eaters. 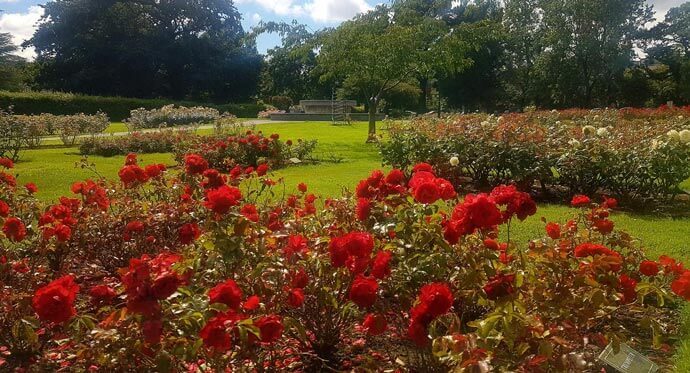 Situated just off Denny Street and known locally as ‘The Green’, Tralee Town Park covers 35 acres and is one of Ireland’s largest urban parks.

A great spot for a stroll at any time of year, it also contains the famous rose garden and a bunch of interesting statues and monuments to notable locals.

If you’re vising Kerry County Museum, make sure you check in here too as it’s just next door. 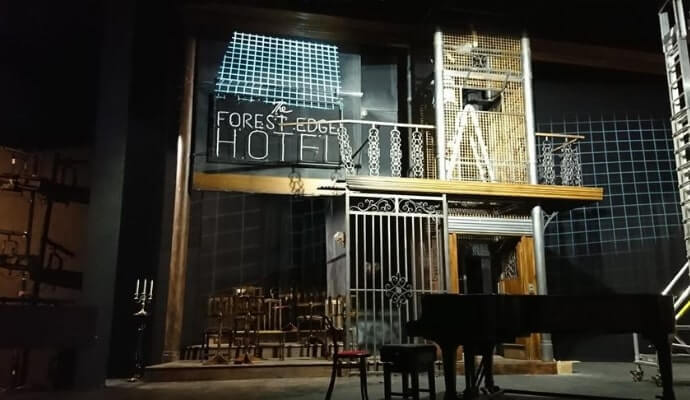 For the uninitiated, head to Siamsa Tíre to get an engaging window into the mystical world of Irish folklore and legend.

Bringing it to life through music, song and dance, Ireland’s National Folk Theatre is based here and celebrates the country’s traditional art forms.

Catch original productions from the resident group of trained performers if you’re in Tralee between May and September.

If you’re looking for things to do in Tralee when it’s raining, Siamsa Tíre is a handy little place to drop into where you can whittle away an evening.

This is another one for those of you in search of things to do in Tralee with kids. Occasionally, just occasionally, the weather in Ireland doesn’t behave itself and indoor activities become highly welcome.

And if you’re too energetic to sit around all day, then Tralee’s Aqua Dome could be the lively diversion you need.

A huge water park with flumes, slides, rapids and saunas, it’s a class way to see out a rainy day whether you’re with friends or have the family in tow. 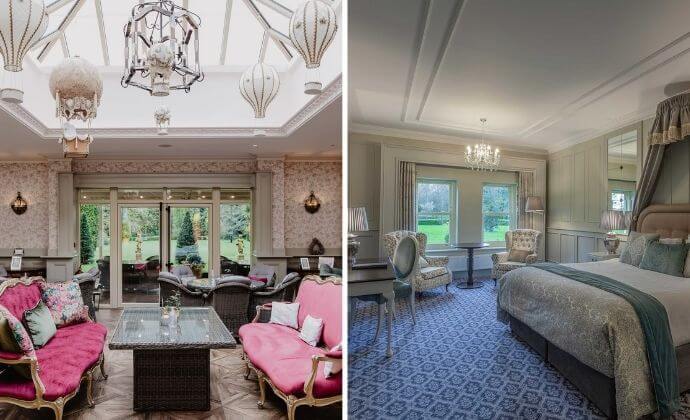 If you’re wondering what to do in Tralee accommodation wise, hop into our Tralee Hotels guide – it’s packed with a mix of unique, luxury and pocket-friendly stays.

The best of the bunch, in my opinion, is the brilliant Ballyseede Castle hotel. A night here is one you’ll remember for a long time to come.

Things to do near Tralee

OK, so we’ve tackled things to do in Tralee – now, it’s time to look at the many things to see and do near Tralee.

As mentioned earlier, Tralee is home to a clatter of the best places to visit in Kerry, so if you make it your base for a night or two, you’ll have an endless number of things to see closeby. 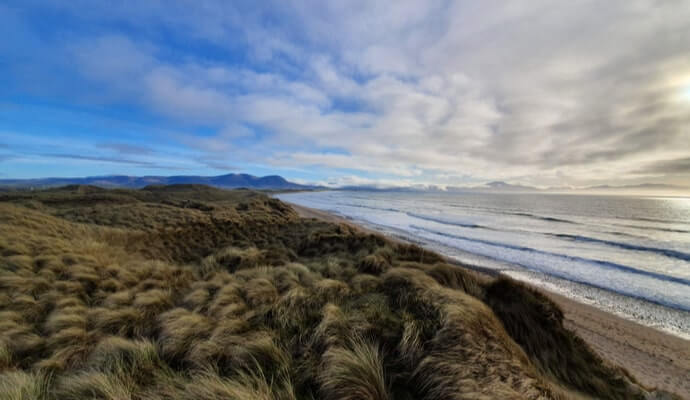 Photo via justinclark82 on shutterstock.com

The arcing beauty of Banna Strand is only a 15-minute drive from Tralee and worth a visit in all seasons. Lined by sand dunes up to 12 metres high, it’s a dramatic scene that appears to go on for miles.

It’s also famously associated with the story of Roger Casement, a prominent republican who was captured on Banna Strand in 1916 while attempting to smuggle arms for the republican movement after landing from a German U-Boat.

A memorial to him on a nearby road was unveiled in 1966. This is one of our favourite beaches in Kerry for good reason! 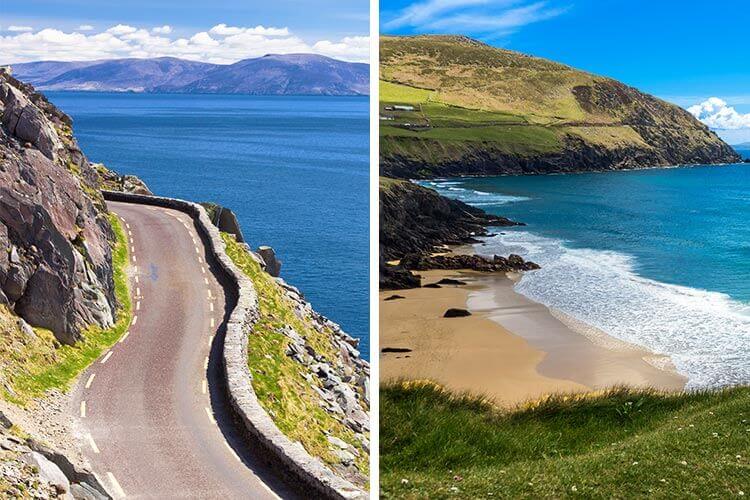 Beginning and ending in the fine little town of Dingle (more on there later), the Slea Head Drive is a circular route taking in some of Ireland’s mightiest scenery, historic sites, charming villages and twisting little roads.

The loop is about 30 miles long and we definitely encourage you not to rush it! A few spots along the way to not miss: Coumeenoole Beach, Blasket Islands, Three Sisters mountain peaks, the Sleeping Giant and Ballyferriter village.

The drive, which takes in many of the best things to do in Dingle, can be polished off with a feed from one of the many mighty places to eat in Dingle Town. 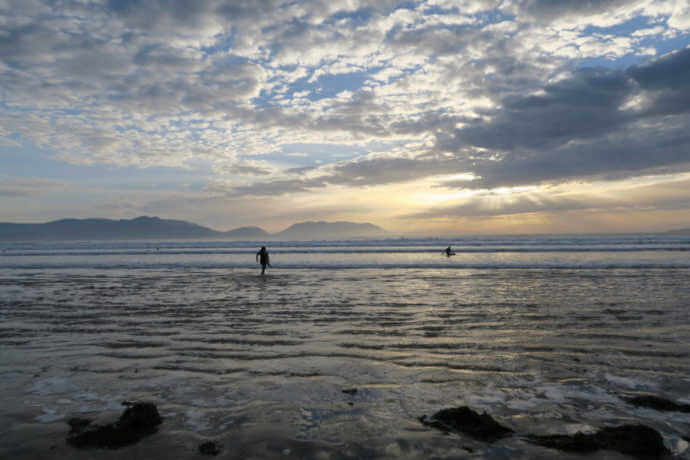 Sticking out of the south side of the Dingle Peninsula like an upside-down thumb (obviously, it gets a thumbs up from us though!), Inch Beach is a 3-mile long sandy beach that’s perfect for a bunch of activities.

Only 30 minutes away from Tralee by car, the blue flag beach is a popular place to get stuck into a whole range of water sports, including surfing, windsurfing, kayaking and kite surfing. 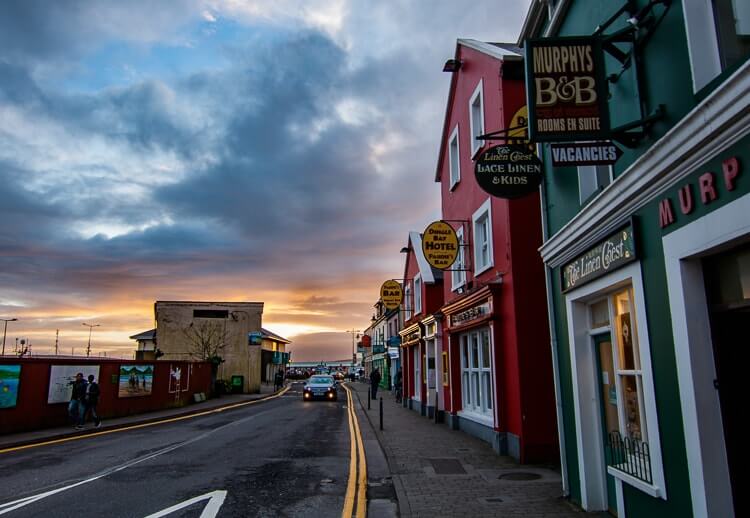 It might be small but there’s some serious craic to be had in Dingle. There’s an absurd amount of pubs in Dingle, bars and restaurants for a town of barely 2,000 people, this colourful little place is a must-visit when you’re in Kerry.

A 45-minute drive from Tralee, you’ll have a plethora of choice when you head out for a few pints here. With great live music, a huge selection of drinks and a deadly beer garden, hit up Dick Mack’s pub for good times. 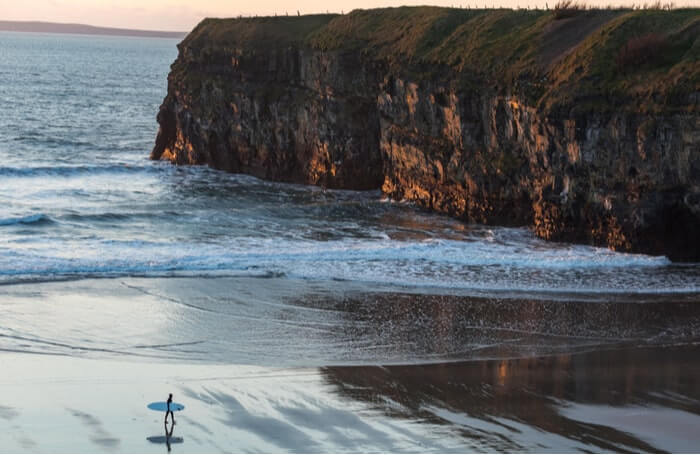 A 30-minute drive north of Tralee, it’s hard to find things to give out about when you’re in the coastal town of Ballybunion.

Not only is it free from industry, pollution and set in a gorgeous part of the world, there are tons of things to do as well!

With great beaches for surfing, picturesque cliff walks and one of the world’s finest golf links courses, you’re unlikely to get bored here. There’s also a fine collection of bars and restaurants to see the night out in.

What great things to do in Tralee have we missed?

I’ve no doubt that there’s plenty of other great things to do in Tralee (and nearby!) that we’ve unintentionally left out of the guide above.

If you have a place that you’d like to recommend, let us know in the comments section below. Cheers!

FAQs about what to do in Tralee

We’ve had a lot of questions over the years asking about everything from the best things to do in Tralee town to what to see near Tralee.

What are the best things to do in Tralee Town?

What is there to do near Tralee?

There’s a tonne of different things to do near Tralee, from the mighty Dingle Peninsula to the Iveragh Peninsula and much more.

What to do in Tralee when it’s raining?

You could try one of the indoor Tralee attractions mentioned above, or you could head off on a scenic drive along the coast towards Dingle.