The ancient Brú na Bóinne is one of the most popular places to visit in Meath.

In a nutshell, Brú na Bóinne is the gateway to Newgrange and Knowth – two of Ireland’s most notable prehistoric structures.

In the guide below, you’ll find info on tours, the history of the area and everything you need to know about the Brú na Bóinne visitor centre. 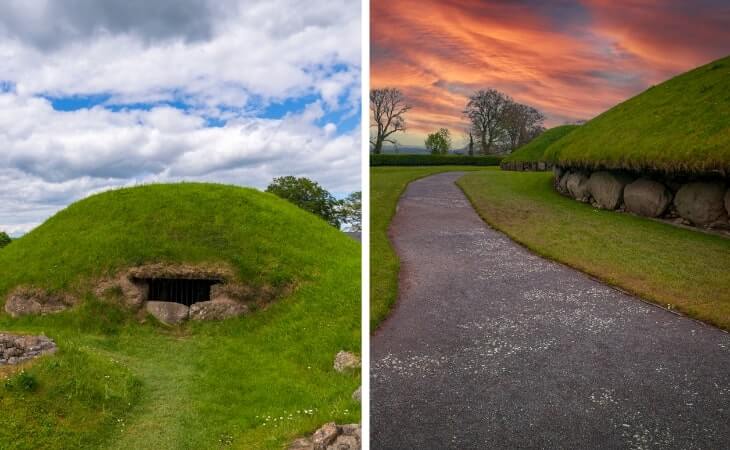 Although a visit to Brú na Bóinne is fairly straightforward, there are a few need-to-knows that’ll make your visit that bit more enjoyable.

Brú na Bóinne is open seven days a week. Buses regularly depart from the visitor centre to the site of Newgrange and Knowth. The first bus leaves at 9.00 am while the last departs at 14:30 (note: times may change with the seasons). The duration of the visit is 1 hour and 45 minutes.

The Brú na Bóinne visitor centre is free but you will have to pay a ticket to visit Newgrange and Knowth. Ticket prices are as follows (note: prices may change):

5. You need to book in advance

Make sure to book your ticket online before arriving at the site. Bear in mind that, at the moment, you can’t access the interior of Newgrange and Knowth – you’ll only be able to see them from the outside.

The story of Brú na Bóinne 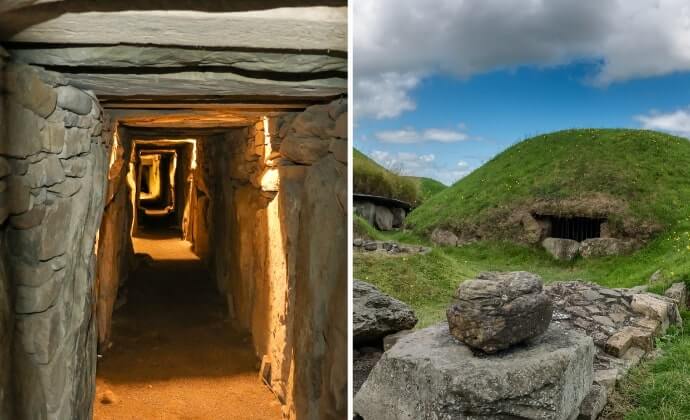 Brú na Bóinne, meaning ‘Palace of the Boyne’, is a UNESCO’s World Heritage Site that’s home to one of the most important prehistoric structures in the world – Newgrange.

It’s also here that you’ll find Knowth and Dowth (note: Dowth isn’t included in the tour), as well as ninety additional minor monuments. Here’s a brief history of this incredible corner of Ireland.

These prehistoric tombs are incredibly old and scholars believe that their construction dates back to 3,200 BC. This means that these tombs are older than both Stonehenge and the Egyptian pyramids!

The three main passage tombs were built to be visible from each other and probably had a ritual function based on their alignments with the equinoxes and the solstices. These sites were continuously used during the Bronze Age, however, only a few artefacts from the Iron Age were found here.

Brú na Bóinne was rediscovered in 1699 when a farmer, Charles Campbell, ordered his workers to dig a hole in the site of Newgrange. His employees soon found the entrance to the ancient site.

As luck would have it, Edward Lhwyd, a Welsh antiquarian, was staying nearby at the time. When he entered the tomb, he found animal bones, shards of glass and… the remains of two people.

The discovery prompted visits from more experienced antiquarians, each of which had their own theory on how it came to be, with theories ranging from the Vikings to the Egyptians.

Over the years, many excavations and renovations took place around Brú na Bóinne, with countless discoveries made in the process. Arguably the most impressive of which is the event that takes place during the winter solstice at Newgrange (info below).

Thing to see and do at Brú na Bóinne

One of the reasons that a visit to the Brú na Bóinne visitor centre is one of the most popular day trips from Dublin is due to the sheer volume there is to see and do here. 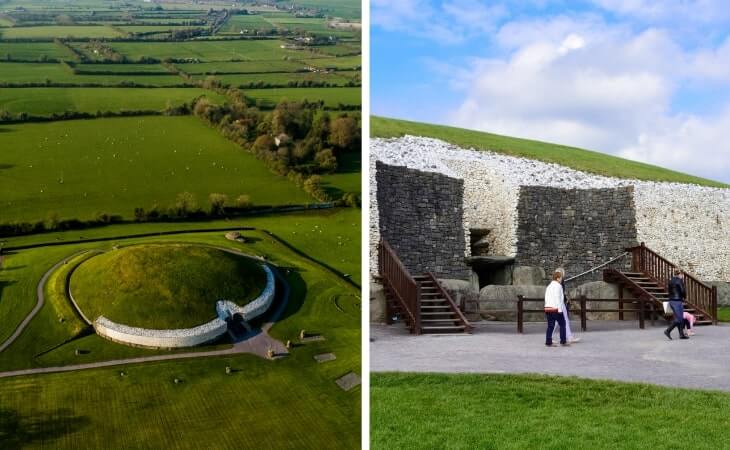 The Brú na Bóinne visitor centre opened in 1997. Here you will find a thoroughly interesting exhibition that offers an in-depth insight into Newgrange, Dowth and Knowth’s history.

In particular, the exhibition focuses on the daily life of the Stone Age society. It explores the society’s ceremonies, the role of the solar cycle, as well as how monuments like Newgrange were built at the time.

Newgrange is the best-preserved site at Brú na Bóinne. It consists of large mounds surrounded by 97 kerbstones. A 62-feet (19-meter) long passage can also be found on the southeastern side.

This leads to a big chamber where the remains of two bodies along with many ancient artefacts, were discovered. As you may know, Newgrange is aligned with the winter solstice.

This means that on the 21st of December the rising sun illuminates the main chamber inside. A big lottery takes place every year and its winners are allowed to access the main chamber to see this natural phenomenon.

Knowth is the largest site at Brú na Bóinne. It’s composed of a main mound, covering an area of approximately half a hectare, surrounded by 18 small ones. Inside the main mound, there are two passages leading to different chambers.

The most interesting feature of this site is the megalithic art (often confused with Celtic symbols) from the Neolithic period. It’s indeed the biggest collection in the whole of Western Europe. 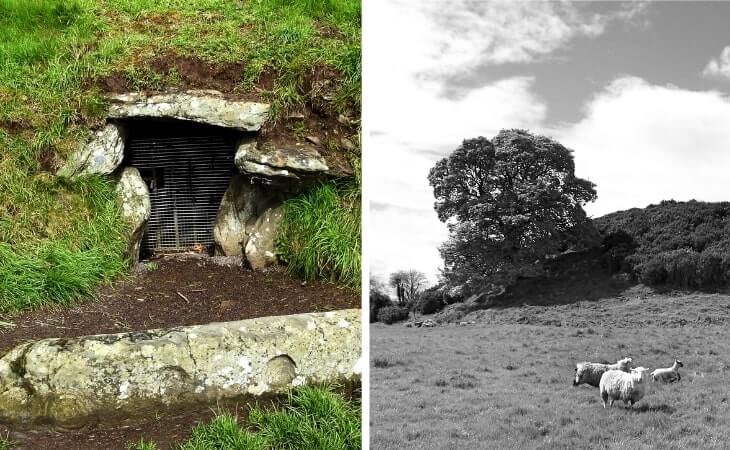 Unlike the other two sites, you won’t have to go to the Brú na Bóinne visitor centre to access Dowth – you can access it directly on your own and there’s no ticket needed. Just like Newgrange and Knowth, this site is made up of a main mound surrounded by kerbstones. The mound measures 280 feet (85 metres) in diameter and is 50 feet (15 metres) in height.

Unfortunately, this site was damaged in 1847 during excavations which resulted in the formation of a large crater in the centre of the structure. There are three main passages in Dowth.

Things to do near Brú na Bóinne

One of the beauties of Brú na Bóinne is that it’s a short spin away from many of the best places to visit in Meath.

Below, you’ll find a handful of things to see and do a stone’s throw from Brú na Bóinne (plus places to eat and where to grab a post-adventure pint!).

If, after seeing Brú na Bóinne, you still have some time, make sure to visit Old Mellifont Abbey in County Louth. This is the first Cisterian monastery in Ireland. This site was built in 1142 by a group of French monks. The most striking feature of the abbey is its two-storey octagonal lavabo.

The beautiful Slane Castle is another nearby attraction well worth visiting. You can take a tour of the castle and explore its grounds. Nearby, you’ll find the charming Slane village along with the ancient Hill of Slane.

You’ll find Trim Castle – the largest Anglo-Norman fortification in Ireland – a short spin from the Brú na Bóinne visitor centre. Trim Castle was originally built in 1172, however, most of what can still be seen nowadays dates back to 1220. This is one of the most impressive castles in Ireland, and it’s well worth visiting.

We’ve had a lot of questions over the years asking about everything from ‘What was Bru na Boinne used for?’ to ‘How do you pronounce it?’.

What actually is Brú na Bóinne?

Brú na Bóinne is the access point for Newgrange and Knowth. There’s a visitor centre on-site that’s a great starting point for the tour that follows.

Is Brú na Bóinne really worth the visit?

Yes! This is one of the most notable pre-historic sites in Ireland and it offers an incredible insight into ancient Ireland.

Are there day-trips there from Dublin

Your tips are so meaningful, thank you for sharing! But what if there is no more availability for online tickets? Can they be bought on the spot?