If you’re looking to stay in Louth or Meath while you explore the beautiful Boyne Valley, Drogheda is well worth considering.

However, even though the town boasts plenty to see and do along with lots of excellent pubs and restaurants, many tend to overlook it.

So, in the guide below, we’re going to give you a sense of what to expect from a visit to Drogheda, and show you the best things to do and places to eat, sleep and drink.

Some quick need-to-knows before visiting Drogheda in Meath 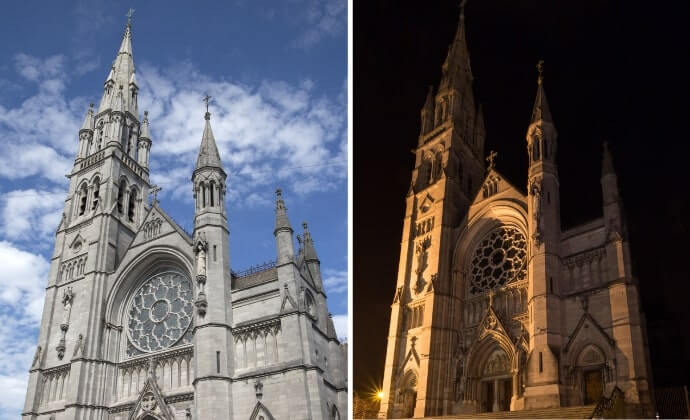 Although a visit to Drogheda is fairly straightforward, there are a few need-to-knows that’ll make your visit that bit more enjoyable.

2. Home to heaps of history

The ancient town of Drogheda is the perfect base for those interested in Irish history. Drogheda is home to several notable monuments such as old churches, ancient towers and a majestic gate (a remnant of the fortified walls that used to protect the town).

3. A good base to explore Meath from

The surroundings of Drogheda are also home to an impressive number of heritage sites, such as Brú na Bóinne, a UNESCO World Heritage Site, Old Mellifont Abbey, Bective Abbey, Loughcrew Cairns and more (see below).

The history of Drogheda 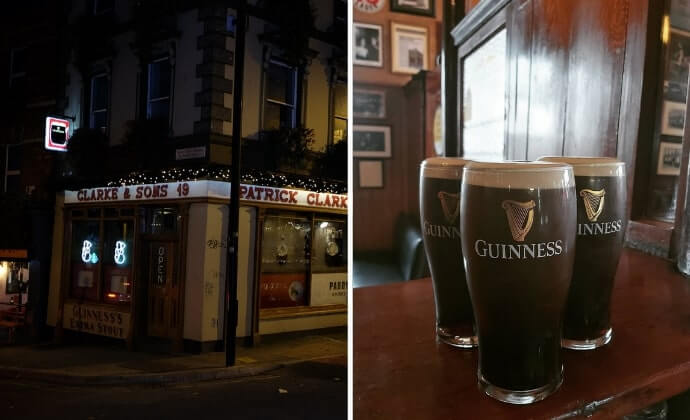 Drogheda is one of the oldest towns in Ireland so, unsurprisingly enough, it has a long history spanning thousands of years.

Our intention with the section below is to give you a sense of Drogheda’s history, so you have a taste of what to expect when you arrive.

There’s clear evidence in the form of prehistoric monuments that tells us that Drogheda has been called ‘home’ by people for thousands of years. In Irish, the towns name translates to ‘Bridge of the Ford’, which is a reference to the towns prime location on the banks of the River Boyne.

After the Normans invaded Ireland, the area that we now know as Drogheda was divided into two, and it was split between what we now know to be counties Meath and Louth.

It was in the 12th century, not long after the Norman invasion, that Hugh De Lacy (Lord of Meath) constructed a motte-and-bailey castle at the top of a hill in the town. This stronghold is what is know Millmount Fort Museum (well worth visiting).

Drogheda was a walled town, and you can see evidence of this at St Laurence’s Gate to this day. The town was besieged on a number of occasions over the years. There were two ‘Sieges of Drogheda’.

The first took place on the 21st of November 1641 to February 1642 during the Irish Rebellion of 1641. The second took place from the 3rd to the 11th of September, 1649, at the beginning of the Cromwellian conquest of Ireland.

Many yeas later, in 1921, the head (yes, the head…) of St. Oliver Plunkett was transported from London to Drogheda and placed inside a case in St. Peter’s Church. You’ll find the head there to this day.

Another notable event took place in 1979, when Pope John Paul II visited the town during his trip around Ireland.

Today Drogheda is a lively town with an abundance of tourist attractions from historical heritage sites, to museums, art exhibitions and even a theme park where you will be able to spend an afternoon of fun with your family!

There’s also plenty of great restaurants in Drogheda along with heaps of old school pubs, too!

Things to do in Drogheda (and nearby)

Now, although we have a detailed guide to the best things to do in Drogheda, I’ll take you through some of our favourites.

Below, you’ll find everything from ancient sites and brilliant tours to some… strange attractions!

Magdalene Tower (on the left in the photo above) is a historical landmark situated in the heart of Drogheda at 9 Magdalene Street. This tower is the only remnant of an ancient Dominican Friary founded in 1224.

The tower in itself was built in the 14th century and here, in 1367, O’Neill and the other Ulster chiefs submitted to the King of England, Richard II.

The Boyne Valley Drive is a fantastic driving route that will take you to the most notable attractions in the Boyne Valley. It’s possible to finish this route in a day, however, if you want to fully explore each stop, make sure to allow two.

The Boyne Valley Route will guide you through historic villages, such as Kells and Slane, ancient abbeys, such as Old Mellifont Abbey and Bective Abbey and wonderful forests, like Balrath Woods.

3. Battle of the Boyne Visitor Centre 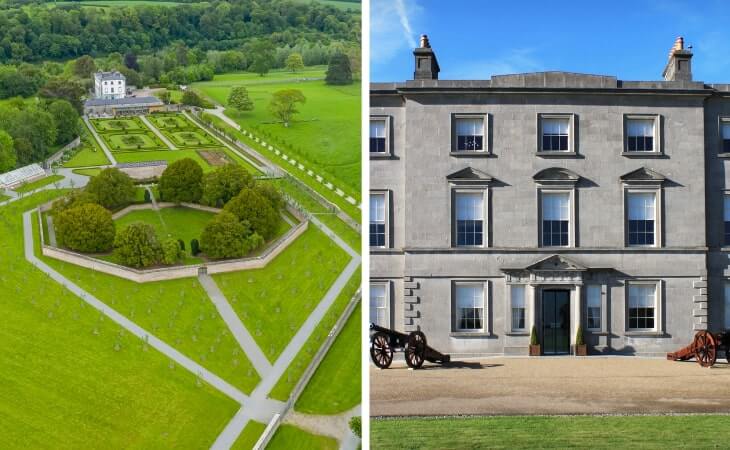 In 1690, the town of Drogheda became the setting of an important battle, the Battle of the Boyne. You’ll find an immersive Visitor Centre on the site where the battle took place.

The Battle of the Boyne Visitor Centre is situated in Oldbridge House and it’s open every day from 9 am to 5:30 pm. Here you will find an audio show, a laser battlefield model and replicas of the weapons that were used during the battle.

There are also several walking trails for you to tackle along with a beautiful walled garden.

St. Peter’s Parish is a Catholic Church situated in the heart of the town on West Street. It was built in 1884 and designed by J. O’ Neill and W.H. Byrne.

St. Peter’s Parish was built with local limestone and in the French Gothic Revival style. This church is best known as being home to St. Oliver Plunkett’s head.

St Laurence’s Gate (on the right in the photo above) is situated in the centre of the town on St. Laurence Street. This gate dates back to the 13th century and it used to be part of the fortification walls protecting the town.

Scholars have wondered why such an imposing gate was located on the east side of the town, considering that the main road leading to Drogheda was located elsewhere.

However, it has been noticed that, from the top of Laurence’s Gate, it’s possible to see the estuary of the River Boyne, so this would have been a good point to see any potential sea invasions.

Although we have a detailed guide to the best restaurants in Drogheda, I’ll take you through the places we keep going back to.

Below, you’ll find a mix of pocket-friendly places to eat to some fine spots for a meal out with friends. 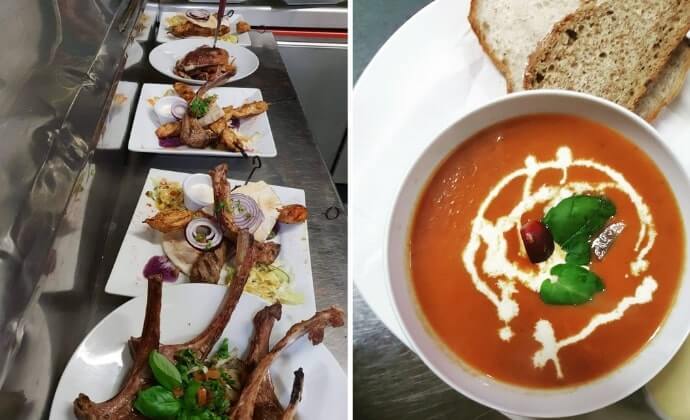 Aisha Cafe & Bistro is located on the banks of Boyne at 4 Wellington Quay. Here you will find an a la carte menu, a two-set menu (one of which is designed for vegetarians) and a kids menu. 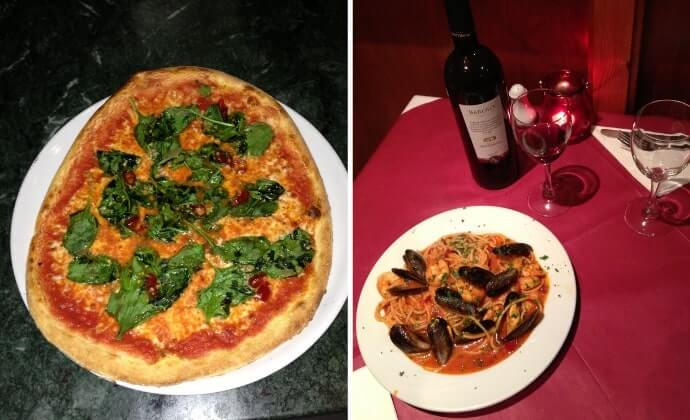 Photos via Sorrento’s on FB

Sorrento’s is an Italian restaurant situated in the heart of the town at 41 Shop Street. Here you will find delicious pizzas and traditional dishes that showcase the very best of Italian cuisine.

Start your meal with a fresh caprese salad and then order lasagne al forno for a real Italian experience! This restaurant also features unique dishes such as the penne alla vodka! Prices are reasonably and you can expect to pay less than €10 for a pasta dish. 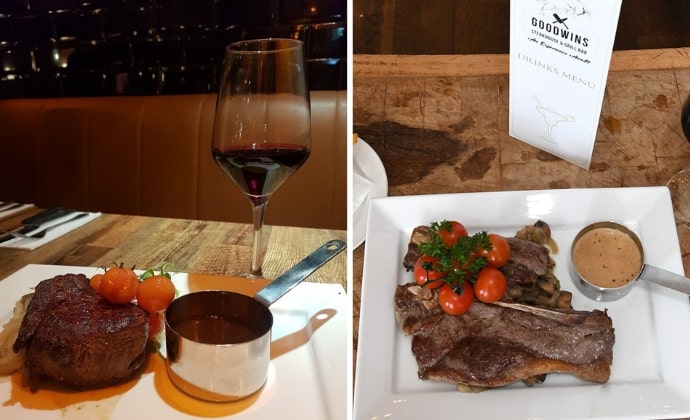 Photos via Goodwins on FB

Goodwins Steakhouse is situated inside the D Hotel. Here you will find an early bird, a dinner menu, a brunch and Sunday lunch menu and a set menu. Goodwins Steakhouse’s signature dish is the ‘Goodwins trio of burgers’, consisting of a beef, a lamb and a venison burger, all served with delicious sauces and cheese.

There’s some wonderful old-school pubs in Drogheda that are well worth nipping into if you fancy a pint.

Now, we go into the towns finest pubs in this guide, but I’ll give you my favourites below.

Clarke’s Bar is one of the older pubs in Drogheda, and it dates back to 1900. Thankfully, it’s managed to retain much of its charm and character over the years, and many of its more unique features are still visible to this day. If you’re a fan of a solid pint of Guinness, make Clarke’s your first stop. 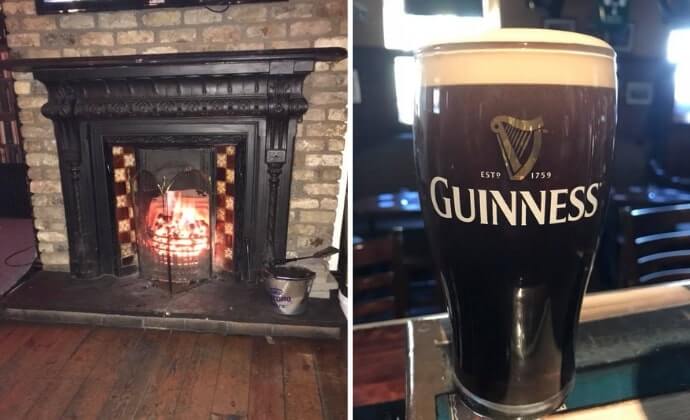 Photos via Sarsfield’s on FB

Sarsfield’s is another great option if you’re a fan of no-fuss pubs with a relaxed atmosphere and top-notch service. If you rock up here when it’s chilly, expect to find a roaring fire crackling away inside. There’s also a decent size beer garden out back for those often-rare summer days. 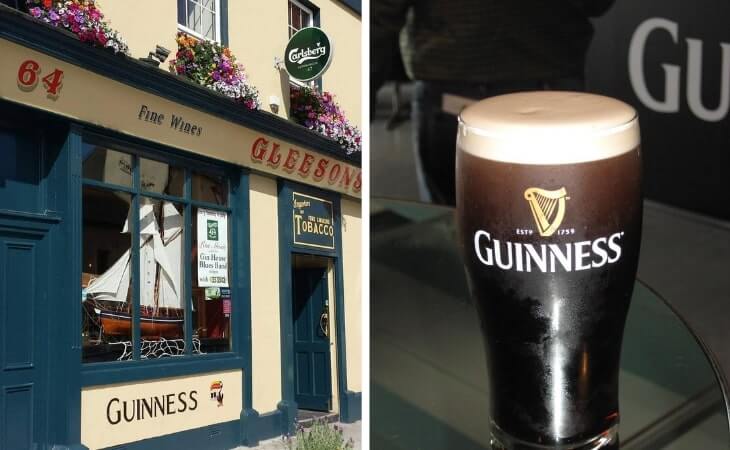 Photos via Gleesons on FB

Gleesons is another mighty traditional pubs, and you’ll find it finely plonked on Narrow West Street. It’s exterior is a bit like a pub you’d stumble across (or stumble into…) in the likes of Dingle, and it has a nice, no-fuss vibe inside.

Again, we have a guide to the best hotels in Drogheda, but I’ll give you a nosey at my favourite places to stay. 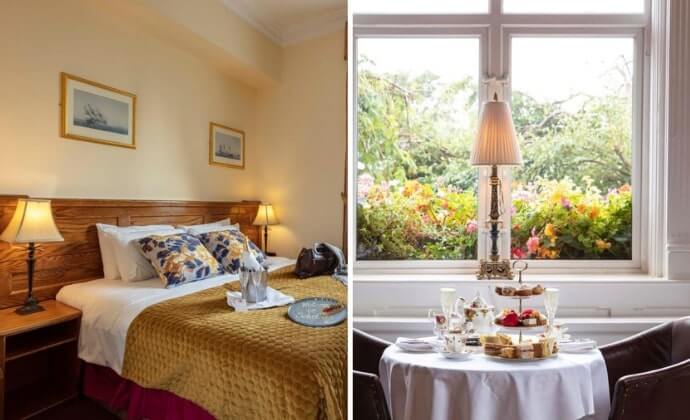 Scholars Townhouse is situated in the centre of Drogheda on King Street. The 3-star hotel is located in a wonderful old building that was built in 1867 and it has managed to retain much of its Victorian charm. Here you will find single, double and family rooms. This hotel also features a wonderful garden with flower displays and water fountains. 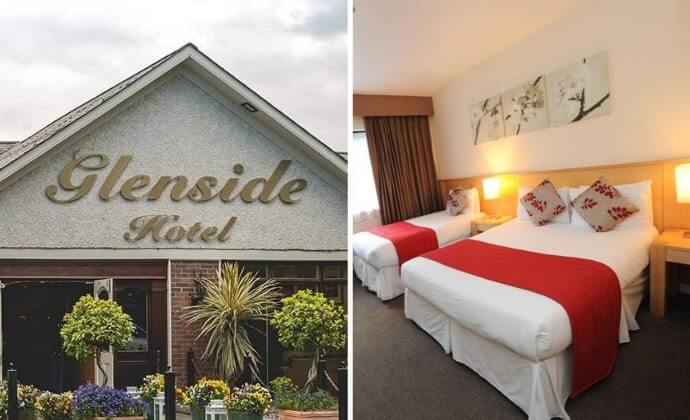 The Glenside Hotel is located just outside of Drogheda on the ​​Dublin Road. This 3-star hotel is pet friendly and features a popular restaurant as well as an outdoor dining space, too. Here you will be able to choose from several types of rooms such as single rooms, double rooms, triple rooms and the beautiful Hilary Suite! 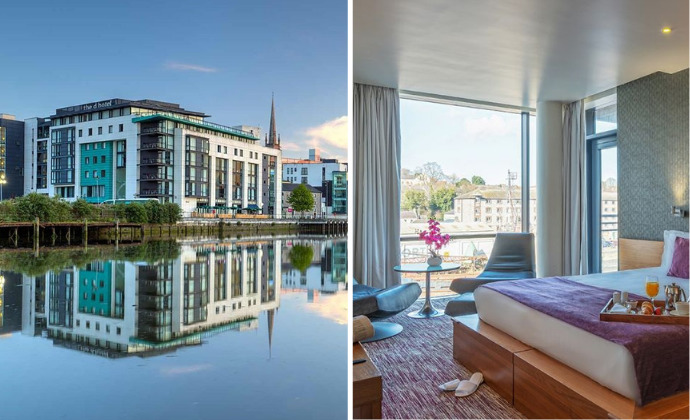 The D is one of the more popular hotels in Louth and it’s situated on the banks of the River Boyne on the ​​Marsh Road. This four-star hotel features 111 rooms, each of which is nice and modern. Some of the rooms also have a wonderful view of the River Boyne! Each of the rooms comes with an ensuite bathroom, tea and coffee making facilities, a multi-channel Plasma Screen and complimentary use of the mini gym.

We’ve had a lot of questions over the years asking about everything from ‘Is Drogheda safe?’ to ‘What is there to do in the town?’.

Is Drogheda worth visiting?

Personally, I wouldn’t go out of my way to visit Drogheda, unless I wanted to visit Millmount Fort. The town, however, makes a great base to explore Meath and Louth from.

Are there many things to do in Drogheda?

You can take a tour of the Millmount Fort, see St. Laurence’s Gate, visit St. Peter’s Church and gaze up at the Magdalene Tower.