If read our guide to the best castles in Galway, you’ll know that we’re big fans of Dunguaire Castle in Kinvara.

It’s one of a handful of castles near Galway City and it’s a stone’s throw from a clatter of things to see and do in the Burren (Clare).

In the guide below, you’ll discover everything you need to know about this mighty fortress, including info on the Dunguaire Castle Banquet and much more.

Some quick need-to-knows before visiting Dunguaire Castle in Galway 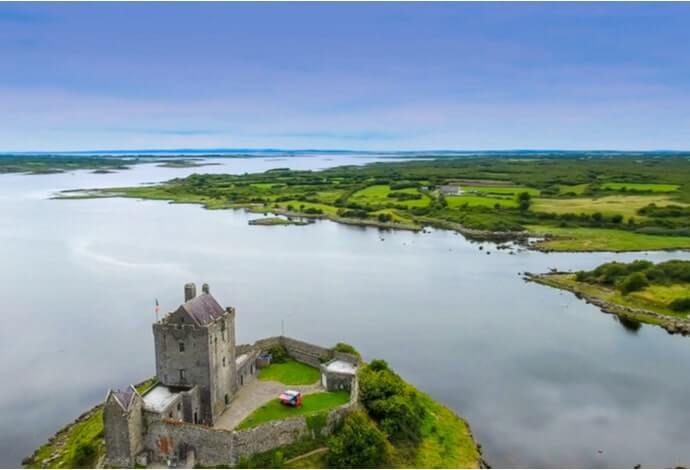 Although a visit to Dunguaire Castle is pretty straightforward, there’s a few need-to-knows that’ll make your visit a bit easier.

Located just north of Kinvara village, Dunguaire Castle is one of the most photographed fortresses in Ireland. This traditional Irish Tower House dominates the Galway Bay shoreline and is open to visitors during summer months.

Dunguaire Castle has a long history stretching back to medieval times. The castle was built in 1520 by the prominent O’Hynes Clan family as a simple tower house with fortified walls.

It’s been tricky to find the opening hours for Dunguaire Castle. From what I can tell (the hours aren’t listed on their website at the time of writing…) the opening hours are April to October frpm 10:00 to 17:00. Check in advance of visiting.

Again, this isn’t clear either, so check in advance as the prices below may not be correct. From what I can tell, it’s free to enter the ground and the entry to the castle is:

A Brief History of Dunguaire Castle in Kinvarra 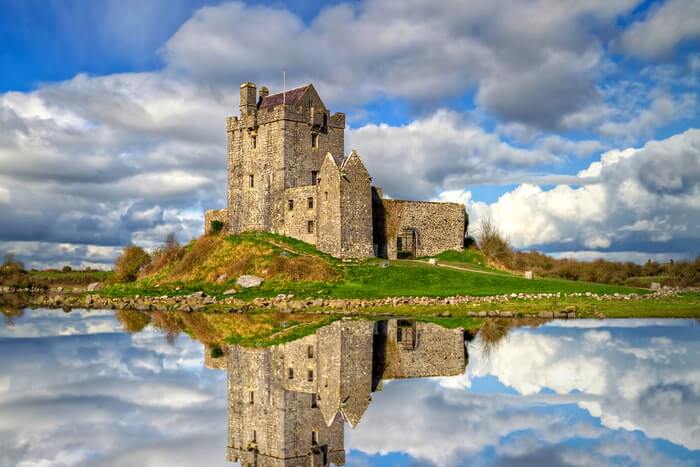 Photo by Patryk Kosmider on Shutterstock

Dunguaire Castle has a long history stretching back to medieval times. The castle was built in 1520 by the prominent O’Hynes Clan family as a simple tower house with fortified walls.

In the 17th century, Dunguaire Castle was given to Martyn’s of Galway and remained in the ownership of this family until the 20th century.

The famous surgeon and writer, Oliver St. John Gogarty bought and renovated the Dunguaire Castle in 1924. He was friends with poets like George Bernard Shaw, Lady Gregory, J.M Synge and W.B. Yeats who used Dunguaire Castle as their meeting place.

According to the legend, when a person stands right in front of the gates of Dunguaire Castle and asks a question, by the end of the day this question will be answered.

Photo by Nordic Moonlight on Shutterstock

To truly experience the beauty of this fortress, head off on a self-guided tour of Dunguaire Castle. The grounds are lovely and the interior is fitted with period furniture and plaques that’ll take you through the castle’s past.

On the ground floor, visitors will find a gift shop and toilets, while level 2 serves as a banqueting hall. On level 3, expect to see typical furniture of the period and level 4 is furnished as left by the last-known occupants from the 70s.

Make sure to get out on the roof and enjoy spectacular views of the bay and village of Kinvara (keep in mind that the walkway around the top of the tower is very narrow).

Culture vultures will be pleased to hear that this magnificent castle was used in the 1969 Walt Disney movie “Guns in the Heather” with Hollywood actor Kurt Russell. The castle was also used as a filming location for “North Sea Hijack” in 1979. 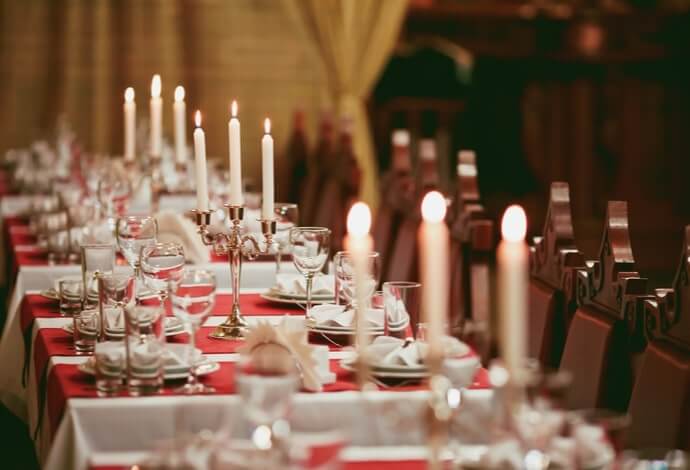 Photo via ANAID studio on Shutterstock

The Dunguaire Castle Banquet, similar to the one in Bunratty Castle, is very popular amongst visiting tourists looking to experience medieval life.

If you fancy checking it out, you’ll need to book your seat in advance. You can then enjoy a night of songs, stories, and poems from another area.

In addition to this entertainment, guests can enjoy a delicious 4-course dinner at the Dunguaire Castle banquet that includes everything from aperitif and mead to Irish oak smoked salmon and much more.

Other Castles in Galway worth visiting

There’s several incredible castles in Galway that are well worth visit. Some, like Menlo Castle, are less well known and often overlooked.

Others, like Kylemore Abbey, are tourist favourites, so you’re best off getting there early to avoid the crowds. 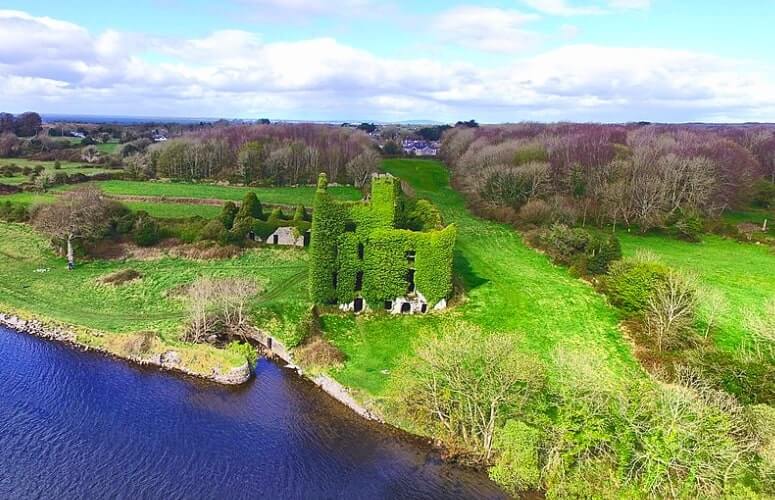 Perched on the banks of the River Corrib on the outskirts of Galway City, Menlo Castle is actually a ruin of a once beautiful 16th century castle where the richest family in Galway lived from 1600 to 1910.

Unfortunately, everything inside the castle was destroyed including heirlooms, tapestries, and paintings. Nowadays, the ruins are completely open and it is possible to walk through the rooms. 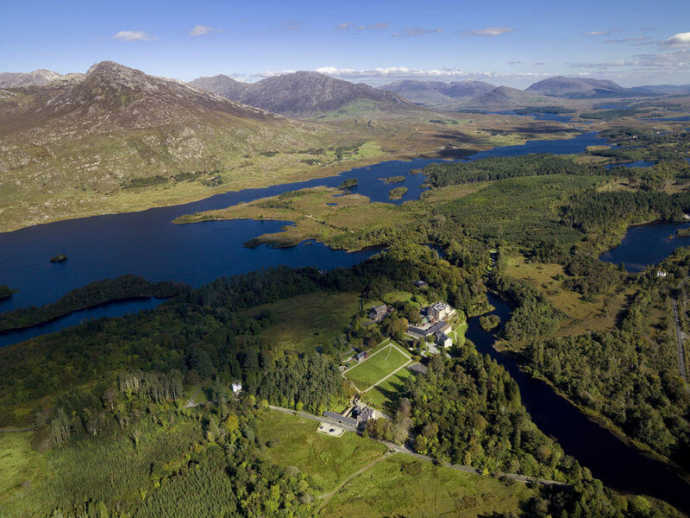 The very fancy Ballynahinch Castle is one of the finest Castle Hotels in Ireland and it has been welcoming guests for nearly 300 years.

Today, this picturesque castle is a luxurious hotel and sporting estate with 48 nicely decorated rooms.

The 700-acre grounds of woodlands offer ideal conditions for enjoying activities like fly- fishing on Ballynahinch River, hiking, and biking. 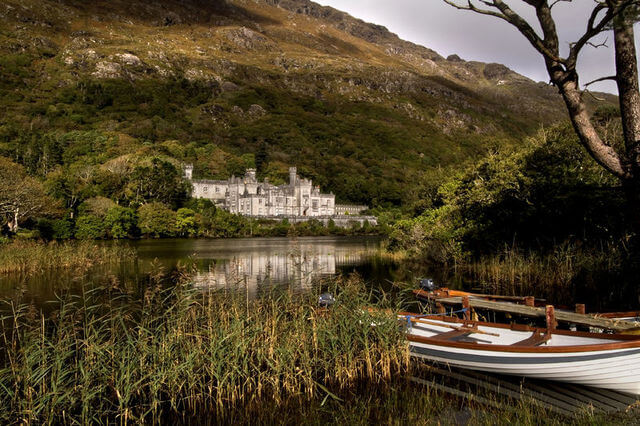 The magnificent Kylemore Abbey and its stunning Victorian Walled Garden is without a doubt one of the most romantic destinations in Ireland.

Steeped in history, Kylemore Abbey and the estate are open to visitors throughout the year and you can explore the Craft Shop, Pottery studio, the Gothic Church, and much more.