The ancient Howth Castle is one of the longest continuously inhabited private homes in Europe.

And although Howth’s biggest pull these days is its vibrant harbour and the Howth Cliff Walk, for centuries the most notable feature about Dublin Bay’s prominent peninsula was its famous castle.

However, 2021 saw the sale of Howth Castle finally go through, and the stunning property is now set to become a luxury hotel.

In the guide below, you’ll discover the very interesting history of Howth Castle along with the different things to see and do in its grounds.

Some quick need-to-knows about Howth Castle 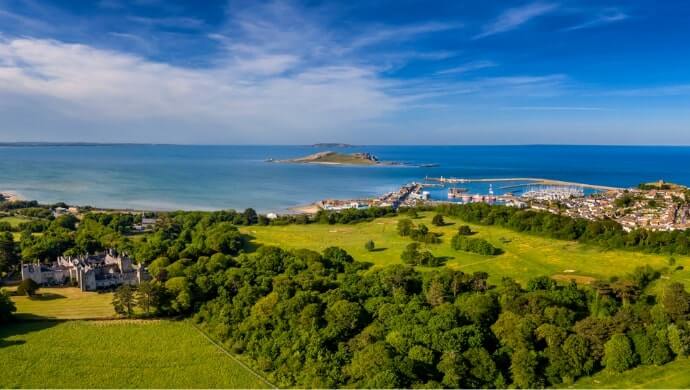 Lying just south of Howth Village, the castle has been in place for almost 1000 years in one form or another. And being so close to Howth’s largest town, it’s easy to reach by car, bus or DART (though admittedly it’s not brilliantly signposted – just whip open Google Maps on your phone).

If you’re heading up in your car then take the R105 from Sutton and enter the demesne at the signs for Deer Park (Golf and Hotel). There’s a nice big space outside the front of the castle for parking and there’s also some space at the nearby National Transport Museum.

3. The castle is private (and was recently sold)

Amazingly, Howth Castle was one of the longest continuously inhabited private homes in Europe and had been in the care of the St Lawrence family since 1177. However, after over 840 years in the same family, the castle has now been sold to an investment firm who plan to turn it into another of Ireland’s castle hotels.

Being private, the castle isn’t always open for tours so it’s not a place you’d typically spend a long time at. Nonetheless, it does make for a cool pit stop if you want to see the grounds and the gardens. Or if you simply just want to look at the castle and take photos and appreciate its age and architecture.

The history of Howth Castle

Granted the title of Lords of Howth in 1180, the St Lawrence family immediately set about building a fortress on the lonely peninsula.

Built by Almeric, the first lord, the original timber castle was built on Tower Hill, overlooking the most prominent of Howth’s beaches – Balscadden Bay.

It stayed there for a couple of generations until a deed recorded that around 1235 another castle had been built on the current location of Howth Castle.

It was probably built of wood once again, but this time the castle was now on much more fertile ground near the harbour.

But as time marches on and weapon technology improves, you can very well imagine that having a wooden castle would provide a pretty feeble defence against any would-be attackers.

Indications are that by the mid-15th-century, it had begun to take shape as a stone castle and today The Keep and Gate Tower are the oldest parts of the building and date from around that period.

The Hall was added alongside the Keep in 1558 and The East Wing, or Tower House, was next to be added sometime between the Restoration in 1660 and 1671.

The impact of Lutyens

Though it was in 1738 when the house actually gained most of its current appearance, in 1911 the renowned English architect Sir Edwin Lutyens was tasked with renovating and extending the structure and his impact is still felt here 100 years later.

He made several dramatic changes to the castle’s exterior, as well as adding a whole new wing, including a library and chapel.

By the 21st century, the Castle saw the opening of a cookery school alongside a cafe and was occasionally available for guided tours.

Things to do at Howth Castle

Views, a cookery school, the stunning Rhododendron Gardens and the guided tour are just some of the things to do at Howth Castle.

Update: As the castle is now sold, it’s likely that non of the activities below will be possible while the property changes hands.

1. Soak up the views

Even if you can’t spend a whole load of time in the castle (if at all), there are some lovely views you can enjoy and especially when the sun is out.

From the bucolic green surrounds, you can see all the way to the shimmering coast and beyond to the craggy uninhabited island of Ireland’s Eye just to the north.

If you are allowed inside, you’ll be afforded panoramic views above the treetops of Dublin Bay and beyond. It’s easy to see why they built the castle here!

Related read: Check out our guide to 13 of the finest restaurants in Howth (from fine dining to cheap and tasty eats)

2. Ramble around the Rhododendron Gardens 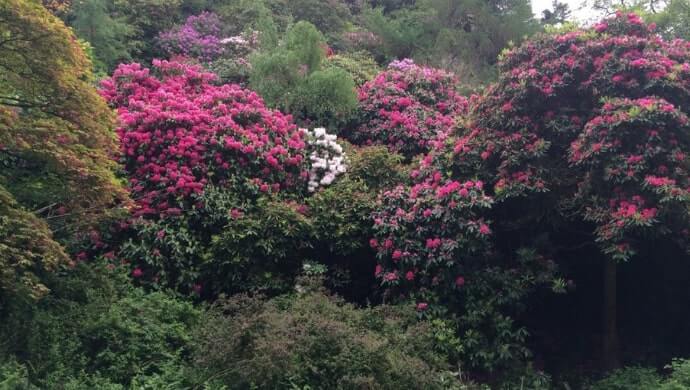 Take a stroll through these enchanting gardens, and if you’re here between April and May then you’re in for a treat.

An avalanche of colour takes over the hill during these months, completely submerging the visitor in fragrance and shades of all descriptions. Located around the edges of the castle, it is estimated that there are over 200 different species and hybrids planted in the garden. 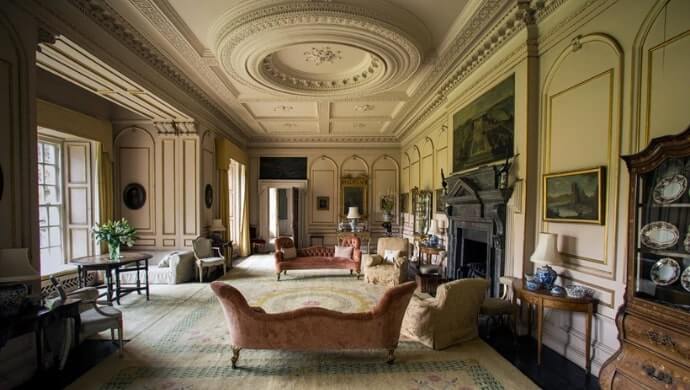 So, it’s likely that the tours of Howth Castle are going to be no more from now on, as the castle changes hands.

However, if you’d like a guided tour of Howth where you can learn about the history of the castle along with soaking up the towns best sites, this tour is worth a look (affiliate link).

This is a 3.5-hour guided tour of Howth that takes in cliffs, sea views and a whole load of history.

Related read: Check out our guide to our favourite pubs in Howth (old school pubs and cosy spots to kick-back in) 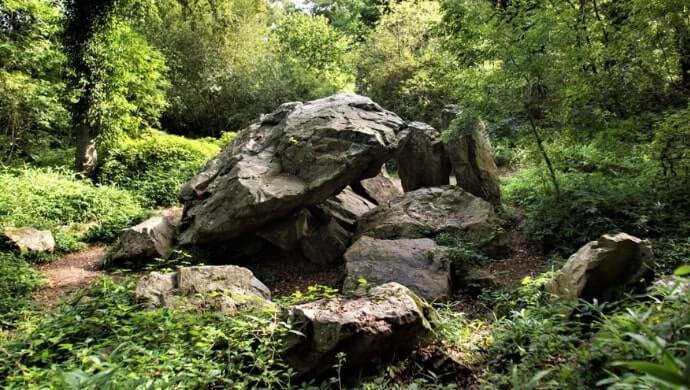 On your ramble around the estate, you’ll inevitably come across the dolmens. They’re an enormous collection of stones dating back thousands of years (attributed to between 2500 BC and 2000 BC) and the 68-tonne (75-ton) capstone is the second heaviest in the country, after the Brownshill Dolmen in Co. Carlow. What’s more, there’s a nice little myth to go along with them too.

Local lore knew this as an ancient tomb for Fionn MacCumhaill, but nineteenth-century poet and antiquarian Sir Samuel Ferguson believed it to be the grave of the legendary Aideen, who died of grief when her husband Oscar, grandson of Fionn, was slain at the Battle of Gabhra in Co Meath. 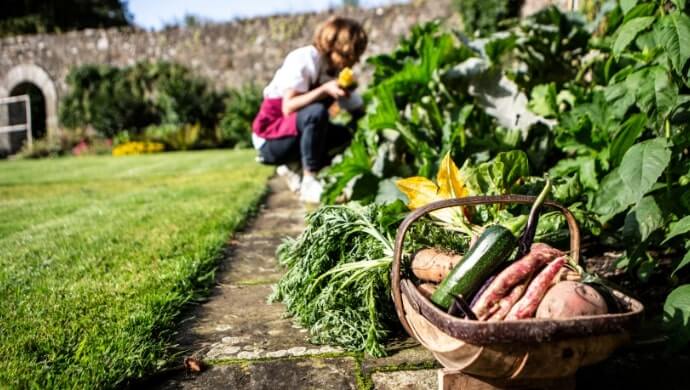 One of the more random (but cool!) developments over the last decade or so has been the cookery school at Howth Castle.

Taking place in a large well-proportioned kitchen that dates back to around 1750, a team of professional chefs share their passion and knowledge about food and carry on the traditions of superb cooking and grand dining practiced in the castle for centuries.

From fish suppers to Thai food, there’s a bunch of different classes you can try in this unique environment. There are a limited number of places however, so jump on them quickly if you want to join!

Things to do near Howth Castle

One of the beauties of Howth Castle is that it’s a short spin away from many of the best things to do in Howth.

Below, you’ll find a handful of things to see and do a stone’s throw from the castle, like Howth Beach, plus places to eat and where to grab a post-adventure pint! 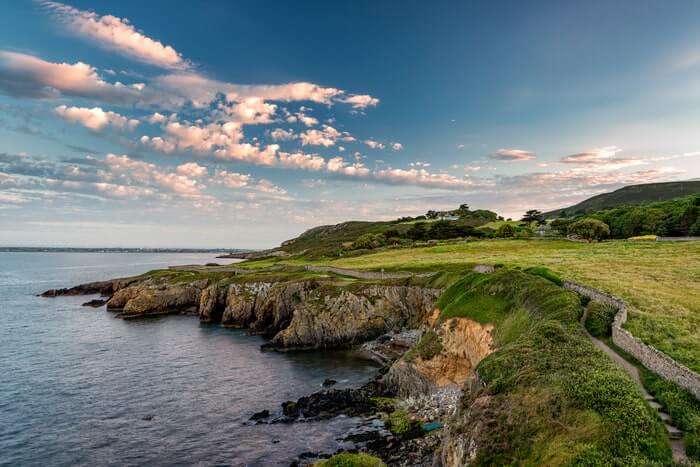 With its cinematic coastal scenes and easy-to-follow trails, the number one reason to visit Howth would be the famous Howth Cliff Walk. Despite the title, there are actually a number of different walking routes in Howth that treat the eye to lovely views of Lambay Island, Ireland’s Eye, Dublin Bay and Baily Lighthouse. See our guide to the walks. 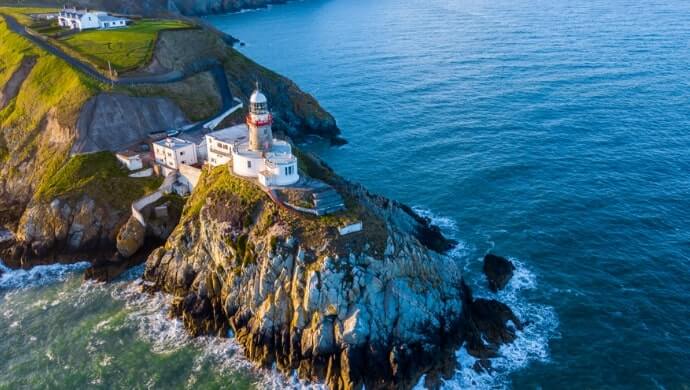 While there’s been a lighthouse on Howth’s south-eastern tip since the mid-17th-century, the current incarnation dates back to 1814. Not that it was able to prevent accidents happening in the stormy winter seas around Dublin Bay, with the paddle steamer Queen Victoria famously striking the Howth Cliffs and leaving 83 people dead in February 1853. 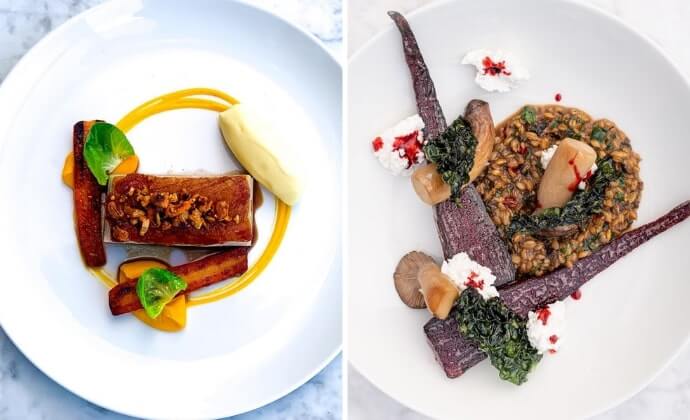 For something a little more leisurely, you can just stay in the Village Harbour and grab a bite in one of the many great restaurants in Howth. There’s also some great pubs in Howth, too, if you fancy a pint.

We’ve had a lot of questions over the years asking about everything from how do you visit the castle to where to park.

Unfortunately, the castle has now been sold to a private investment company who are turning it into a castle, so it isn’t open for tours.

Has Howth Castle been sold?

Yes, the castle was sold in 2021 and it is now set to become a luxury castle hotel.

Can you take a tour of Howth Castle?

You used to be able to take tours at certain times of the year, but this is no more now that the castle has changed hands.