The topic of the best pubs in Kerry is one that tends to stir up a fair bit of debate online.

Everyone has their favourites, which is fair enough! In the guide below, I’m going to tell you what I think are the best pubs in Kerry.

Now, I’m not saying there isn’t many more mighty pubs in the Kingdom – these are just my favourite spots.

Below, you’ll find everything from some well know pubs in Dingle and Kerry to some lovely little haunts that lay a little off-the-beaten-path.

The best pubs in Kerry 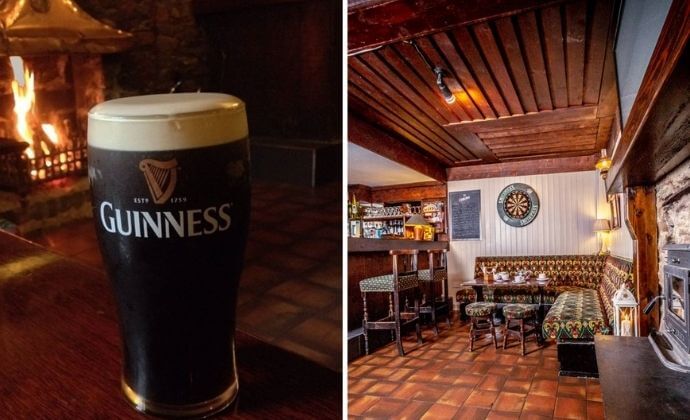 Kerry is home to many a mighty pub. From old-school-spots that look like they haven’t changed in 50 years to fancy new gastro pubs, there’s something to tickle every fancy.

As you’ll gather fairly quickly from the guide below, the best pubs in Kerry are, in my opinion, the traditional spots where both the pints and the interiors will have you coming back for more. 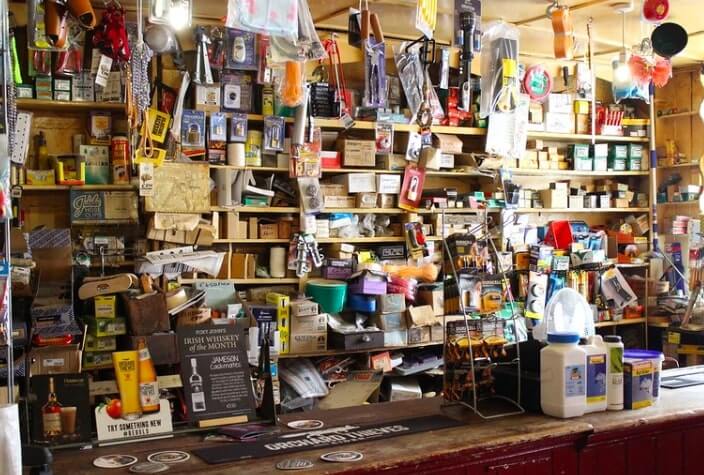 Although there’s a seemingly endless number of pubs in Dingle, the best of the bunch, in my opinon, is Foxy John’s.

Located on Dingle Main St., Foxy John’s is a mix between a pub and a hardware store, and you’ll find everything from beer and whiskey to hammers and nails for sale behind the bar.

Visitors here can expect great Guinness and impromptu trad session along with a plethora of random artifacts and trinkets scattered along the walls. 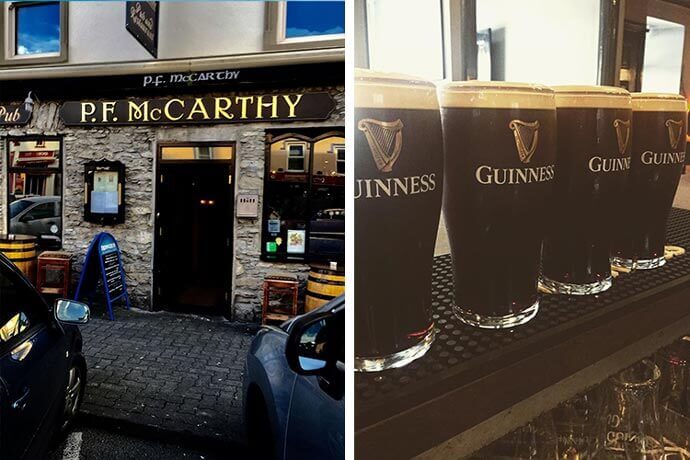 Any time I’m in Kenmare, I etch out an hour or an evening to nip into PF McCarthy’s. Both the food and the pints in this place hit the spot.

One of Kenmare’s oldest pubs, PF’s (as it’s known locally) is a great spot to relax with a pint after a long day of exploring.

The food from PF McCarthy’s also rivals some of the best restaurants in Kenmare. One the last occasion I was here, there was trad music banging away. A great little pub. 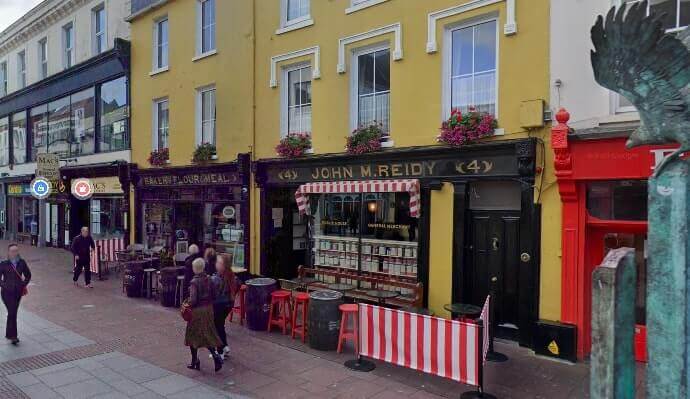 Reidy’s is arguably one of the best pubs in Killarney, and there’s no real mystery why. John M. Reidy is an institution.

Since it was built in the 1870s, it’s been home to everything from a sweetshop to an agricultural supply store.

Nowadays, John M. Reidy is a lively bar in Killarney that offers a variety of drinks (try the signature Reidy’s Whiskey Sour) and a buzzy atmosphere. pubs in that area. 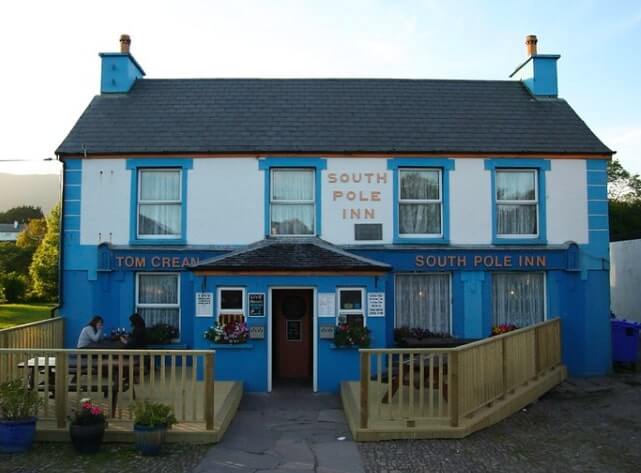 The South Pole Inn is more off-the-beaten-path than the pubs in Kerry mentioned up until this point. You’ll find it in Annascaul – a fine point to join the Dingle Way.

Now, if you’re not familiar with the South Pole Inn, it was once owned by the celebrated Antarctic explorer, Tom Crean. The pub boasts a bounty of memorabilia from the explorers adventures, which you can admire as you sup.

Crean returned to Annascaul (his home) and opened the South Pole Inn in 1927. Many years later, in 1992, the pub was bough by another Annauscaul man, Tom Kennedy, who has helped the pub rack up rave reviews online. 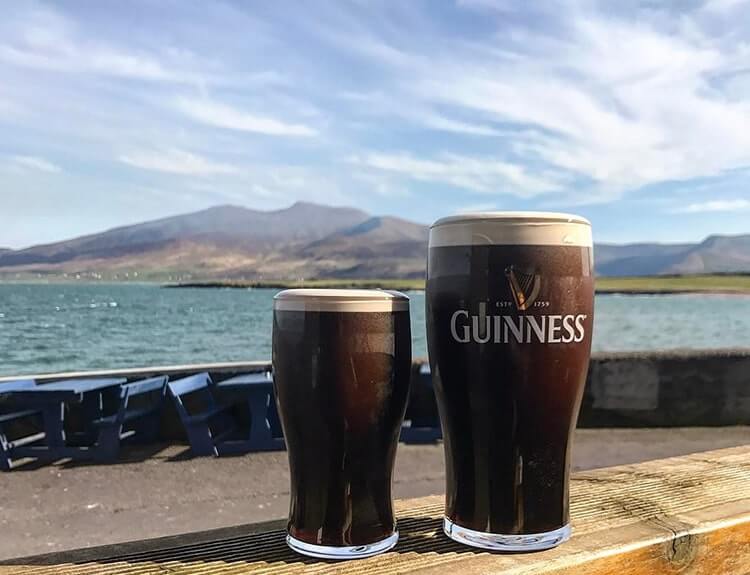 Murphy’s in Brandon is arguably one of the best pubs in Kerry when it comes to views, as you can see in the snap above.

Murphy’s is a fine place for a scenic pint and, if you arrive on a clear day, you can sit outside and soak up mountain views.

This is a great spot to drop into after completing the Mount Brandon hike or as a detour off the Slea Head drive. 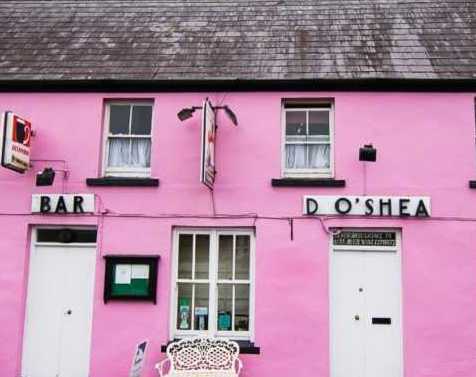 O’Shea’s is one of the most colourful pubs in Kerry and you’ll find it in the village of Sneem, right across from the green in the centre of the village.

There are several nooks and crannies if you crave peace, or sit up at the bar where you’re bound to get chatting to someone.

On a good day, the patio is great, and there are some seats out front too. The pub also hosts a number of events, such as live music and BBQ days. 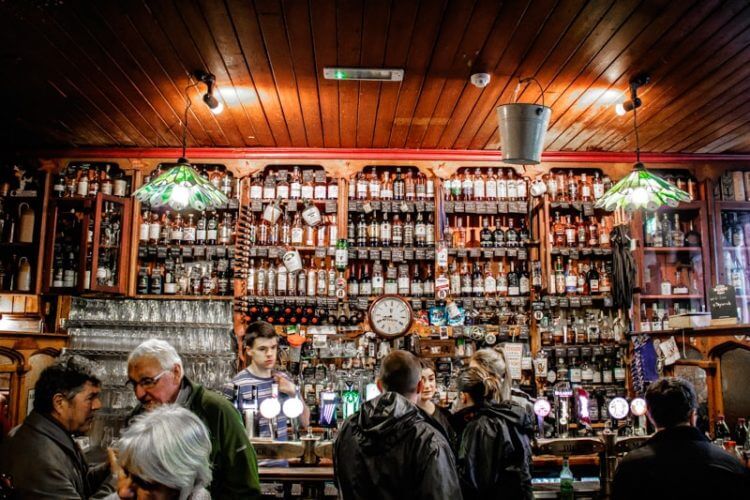 Dick Mack’s is one of the best-know pubs in Kerry, and for good reason – you can’t go wrong with a few hours tucked away in here.

If you can, try and get in here early and nab a seat in the snug (you’d be doing well) or behind the table to the left as you walk in the door.

This is one of those pubs that you wish was your local. The pints, the interior, the location and the people make it a pub I’ll be coming back to over and over again.

8. The bar in the Glenbeigh Hotel

Next up may seem like a bit of a random one. I spent a rainy winters night in the bar in the Glenbeigh Hotel many years back, and I’ve had it in my head to go back every since.

Oozing rustic charm, it’s a fine spot for a few pints (see above…) and the food here (well, it was a couple of years back when I was there) is pretty damn good too!

If you’re visiting on a Sunday, you can expect traditional music sessions. If you visit on a midweek evening (like I did) it’s a nice quiet spot for a pint. 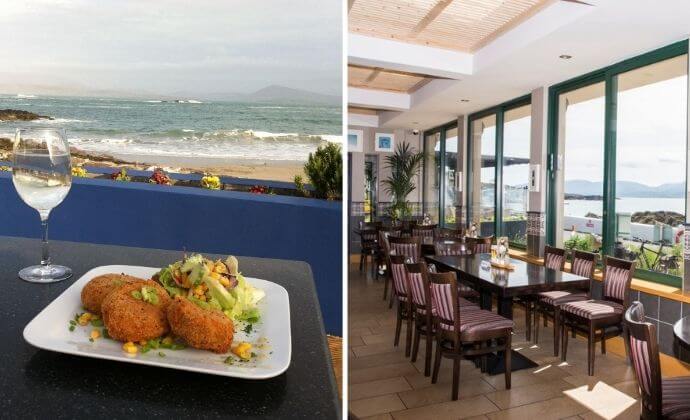 If you’re driving (or cycling!) the Ring of Kerry, stop in Caherdaniel and nab a seat outside (weather permitting) of O’Carroll’s Cove. Fine food and drink aside, the views from this place are just out of this world.

There’s something incredibly special about winding down a day with a pint where you’re a stone’s throw from waves crashing.

This is one of the best pubs in Kerry for food and drink with a view. It can be hard to nab a seat by the sea during the peak season, though!

10. Kennedy’s (one of the cosiest pubs in Dingle) 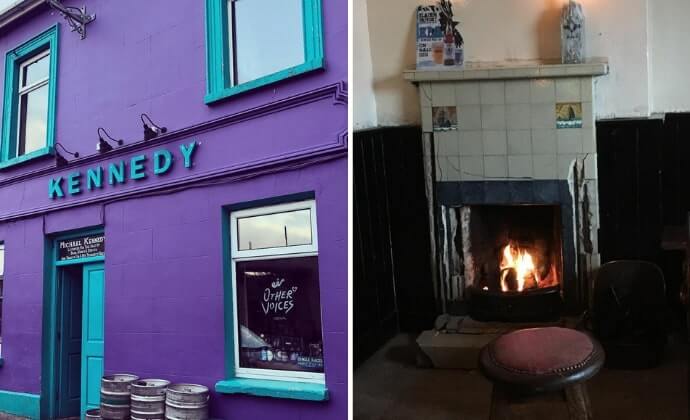 If you ramble through Dingle, you’ll find it hard to miss the colourful exterior of Kennedy’s – yep, it’s the big purple one.

However, don’t let the funky exterior fool you – this cosy spot couldn’t be more traditional on the inside.

Those that visit can expect a beautiful open fire, some quirky decor (like a big chest that’s used as a table) and a glorious old-world buzz.

There’s also an open door policy that welcomes in all kinds of travelling musicians (not just trad). Try this one, when you can – you’ll be glad you did! 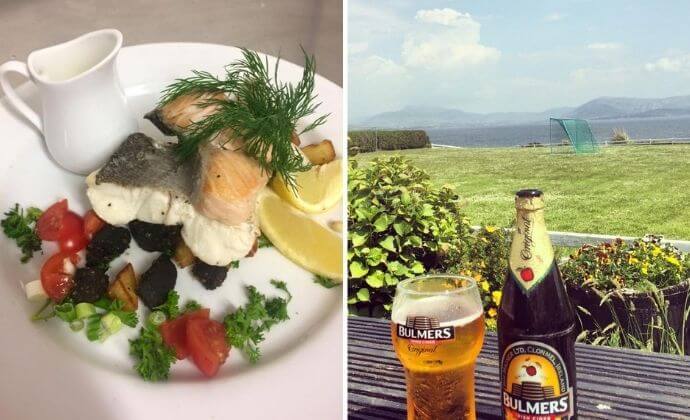 Photos via Cable O’Leary’s Pub and Restaurant on Facebook

Named after a 19th century local hero, Cable O’Leary’s in Ballinskelligs is a fine place for a pint and a bite with a view.

As you can see from the photo above, O’Leary’s is situated next to the water and it boasts mountain and ocean views.

I’d argue that O’Leary’s is home to one of the best beer gardens in Ireland. Disagree? Let me know below!

What pubs in Kerry have we missed?

This isn’t a guide to the best pubs in Kerry – it’s just the ones I’ve nipped into over the years and have day-dreamed about every since.

Have a favourite pub in Kerry? Let me know in the comments section below! Cheers!

Dooley's in Waterville is an awesome pub and restaurant! The food and pints are delicious! David and Katie are some of the finest and funnest people we know! They also have a rooftop where the sunsets are incredible! This place should definitely be on your list!

I would like to buy a tee shirt or swear shirt from everyone one of these pub’s is they say Kerry Ireland in it. How would I go about that ?

So, I know many of the more touristy pubs in Ireland sell t-shirts on their websites. It could be worth Googling some of the pubs on this list, visiting their websites, and then seeing if they have any on sale?