If you’re in search of things to do in Glengarriff in Cork, you’ve landed in the right place.

Situated on the Beara Peninsula, Glengarriff is a village that punches well above its weight.

It has fewer than 200 permanent residents but is known as an international tourist destination due to the many natural attractions in the area.

In the guide below, you’ll discover our favourite things to do in Glengarriff, from the mighty Glengarriff Nature Reserve to islands, scenic drives and much more.

The best things to do in Glengarriff 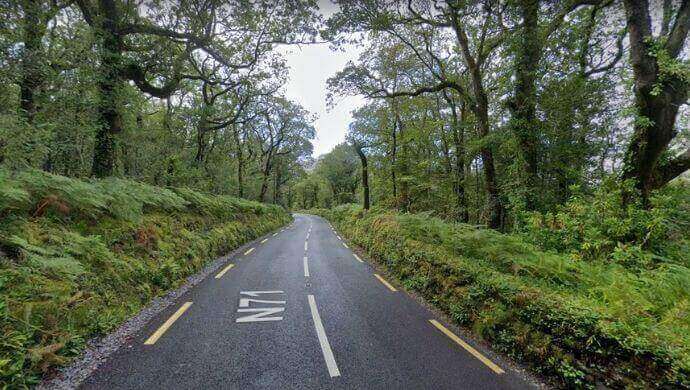 The lovely little town of Glengarriff is a fine base for exploring; it’s close to many of the best things to do in West Cork and the village itself is home to some great pubs and places to eat.

The first section of our guide tackles the various things to do in Glengarriff, for those of you that don’t fancy leaving the area. 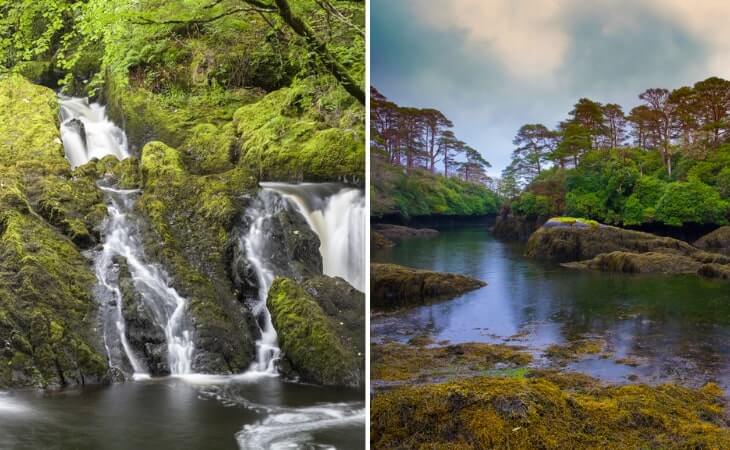 When it comes to things to do in Glengarriff, one attraction reigns supreme. I’m talking, of course, about the incredible Glengarriff Woods. It’s here you’ll find some of the best walks in Cork.

Nestled in a rugged glen at the foot of the Caha mountains, the Glengarriff Nature Reserve opens out into gorgeous Glengarriff Harbour.

There are several well-sign-posted walks throughout the woods, clearly marked for all ages and abilities.

Walk among the clouds on the mountain tops, and If you want a reminder of how beautiful is this country of ours, take a 30-minute walk up to Lady Bantry’s lookout and drink in the views.

Take your time, appreciate the old oak trees’ beauty, the dragonflies, and the ducks floating down the rambling river—an excellent place for body, mind, and soul. 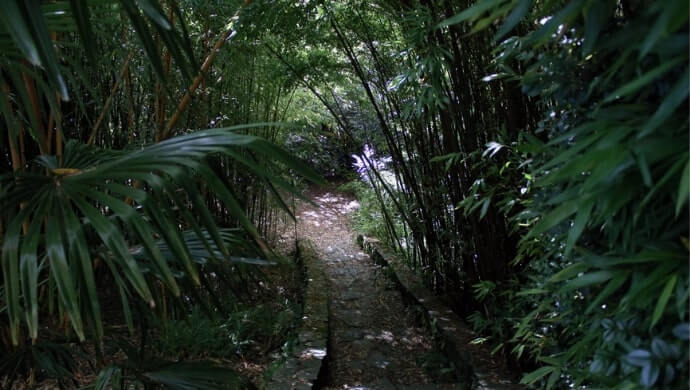 With Palm trees, tree ferns and loads of bamboo, this place looks like something plucked from New Zealand. There is a stillness that calms as you wander around this beautiful, privately owned Park.

Dogs are welcome, and children go free, and the coffee shop provides a selection of cakes homemade by the owner.

Wander through the shade to the Park’s highlights, the giant eucalyptus and a strawberry tree, plus the fantastic view across Bantry Bay with its many islets.

Related read: Check out our guide to the best hotels in Glengarriff (with something to suit most budgets) 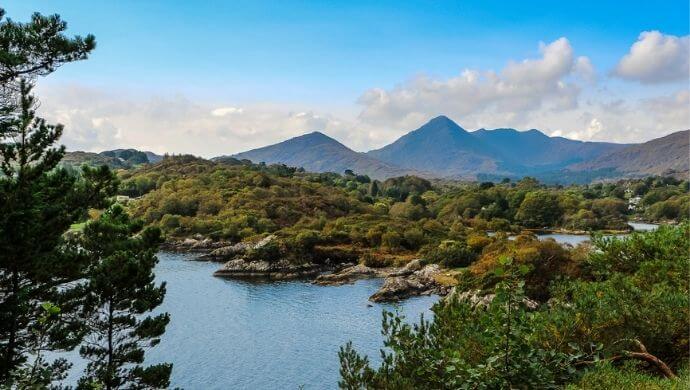 An oasis in Glengariff Harbour and one of Bantry Bay’s attractions, Garnish Island hosts a mix of cultural influences.

An Italian Casita, a Grecian Temple and a Martello Tower are just some of the attractions on this significant island, renowned worldwide for its gardens.

Because of the Gulf Stream’s proximity, combined with shelter from the woodland, Glengarriff enjoys a micro-climate that is well suited to the many exotic plants that flourish here.

When you finish up on Garnish, there are plenty of things to do in Bantry to keep you busy! 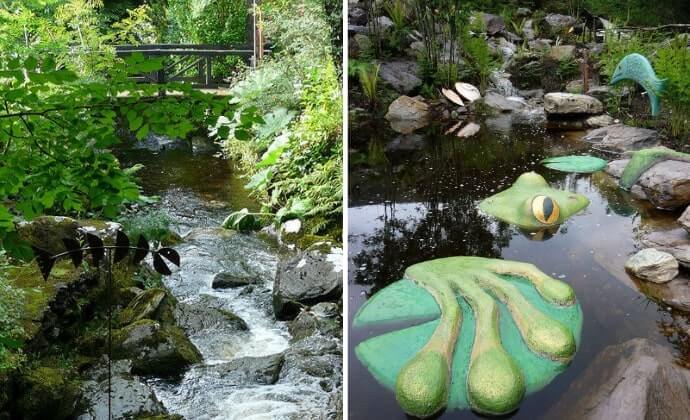 Photos via the Ewe

A magical place, this interactive sculpture garden covers 6 acres and laid out in 4 tiers up the mountainside. Each level has a different theme – Water, Time, The Environment, and Ancient Earth.

Every sculpture and piece of art in the garden has been designed by one of the owners, Sheena Wood, and are arranged to surprise and delight as visitors walk around. There’s an educational element to it as well, so children are very welcome.

The garden is such an innovative, immersive experience it takes at least 3 hours to see everything, so give yourself plenty of time to get around.

Other popular things to do in Glengarriff and nearby 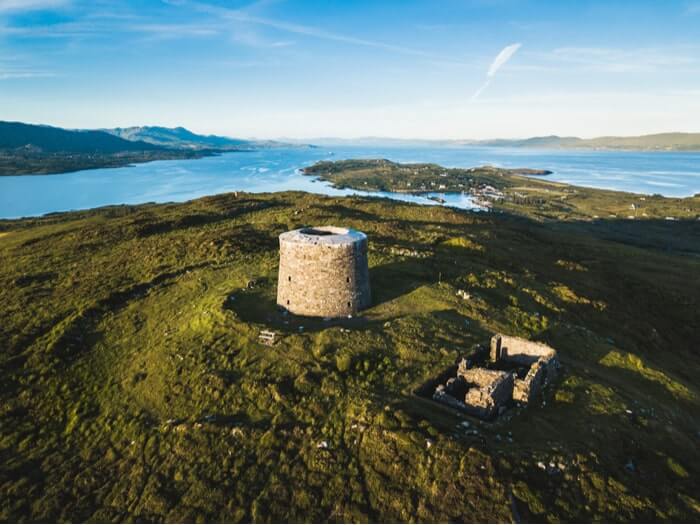 One of the beauties of Glengarriff is that it’s a short spin away from a clatter of other attractions, both man-made and natural.

Below, you’ll find a handful of more things to do in Glengarriff along with places to visit a stone’s throw from the town. 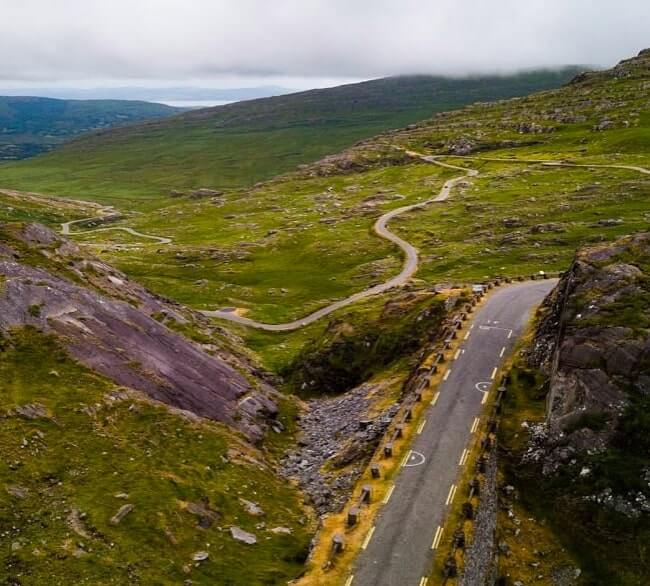 The Healy Pass winds over the Caha mountains, passing through two of the highest summits in the range. It’s a desolate place, even in summer, but that’s part of its rugged beauty.

Starving locals built it in exchange for food during the famine years, the Pass connects Cork and Kerry, and when you get to the top, the maneuvering around hairpin bends will all have been worth it for the views over Bantry and Kenmare bays.

You’d need at least a bit of familiarity with the narrow roads of Ireland before attempting to drive the Pass – it’s not for the fainthearted. See our Ring of Beara drive route for more. 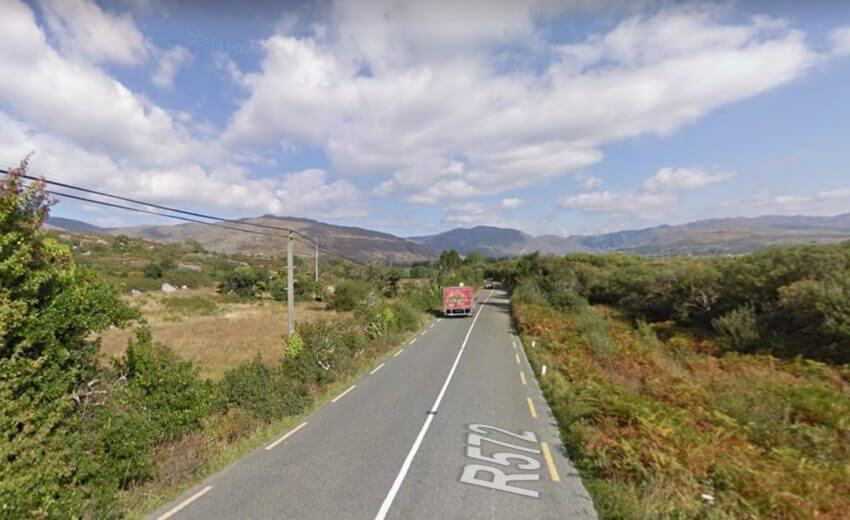 Popular culture has it that Daphne du Maurier’s book of the same name is based around this hill. In du Maurier’s novel, the mountain seems to ‘swallow’ generations of the mountain’s owners who were mining on it. Maybe it didn’t like being disturbed?

Nowadays, it’s a 7-8 hour walk over 13km, giving you an idea of its difficulty. Only experienced hikers need apply.

Marvel at the views across Bantry Bay to the Sheep’s Head peninsula and on to the Kerry Mountains when you arrive at the top. The two lakes at the bottom drain into the Mare’s Tail waterfall, the highest waterfall in Ireland and the UK.

You can visit and enjoy Bere Island for a couple of hours, but a more extended stay is possible and more satisfying.

The island sits at the mouth of Europe’s deepest harbour, and since the Bronze age, Berehaven and Lawrence Cove have been providing safe shelter for all sizes and types of boat.

The whole island is like a museum, from the Druid’s Altar wedge tomb to the more recent Martello towers, signal tower and Lonhort, a military fortification housing six-inch guns, a trench and underground constructions.

If you’re lucky, you might see a killer whale in the deep waters and make sure to visit the Heritage Museum before you leave. 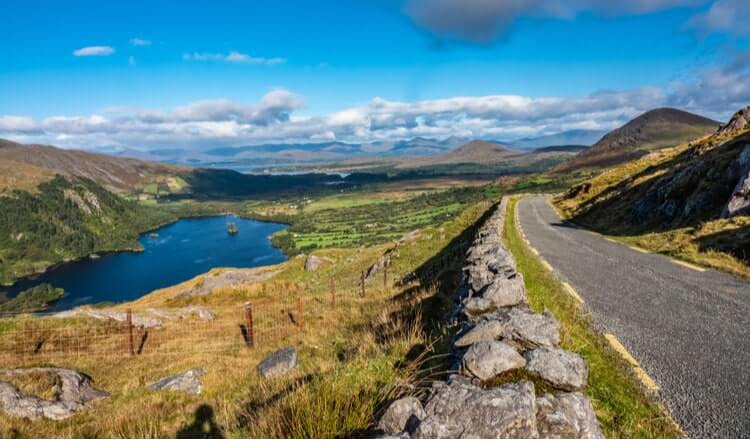 If you were of a mind to, you could drive the Ring of Beara in 2 hours, but if you did, you’d miss the diversions, side roads and the hidden gems along the way.

The cycle option is a challenge if that’s what you’re looking for. Loop from Glengargiff through the Caha Pass to Kenmare, up the Healy Pass to visit the colourful towns of the Peninsula and back to Glengariff via the Healy Pass again.

An experienced cyclist could do it in a day, or you could take your time and stop off overnight along the way and make a 3-day event of it. Be careful, though, for every challenging climb; there’s an exhilarating descent. 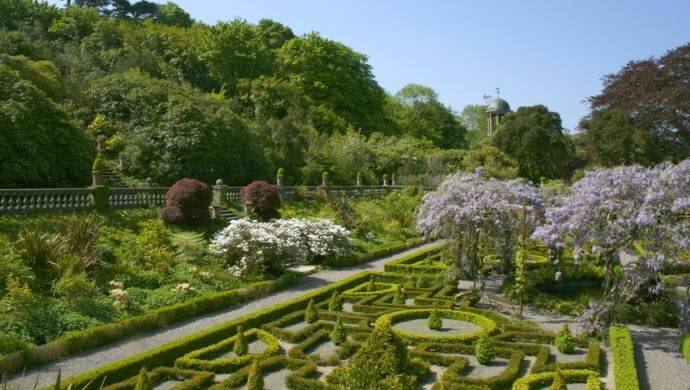 The unique Bantry House and Gardens has been owned and managed by the White family since 1739, and since its opening to the public in the 1940s, visitors have enjoyed viewing the original furniture and objects d’art.

The formal gardens are set out over seven terraces, with the house sitting on the third terrace.

The Wisteria circle is fabulous, and you can give your legs a stretch by walking up the 100 steps to the woodland behind.

The garden and tearoom are open daily from Easter to October, and even in poor weather, the views out to the Bay are beautiful.  A tranquil oasis to while away an hour or two. 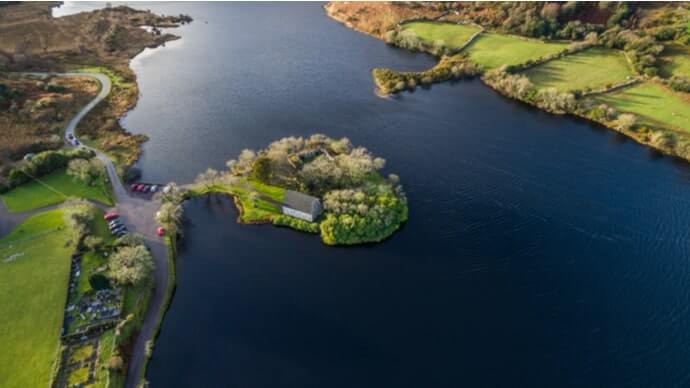 Today Gougane Barra is a 138 Ha. Park with twenty species of tree and a significant number of native flora and fauna. Hillwalking is popular in the Park, and you can drive it for about 5km.

In the past, the Gougane Barra was richly significant for the Catholic Church, its name originally having come from St Finbar, who built a monastery on a nearby island during the 6th Century.

During the Penal Times (when laws were imposed to try to force Catholics to accept the Church of Ireland), Gougane Barra’s remote location made it a safe place for the celebration of Mass. 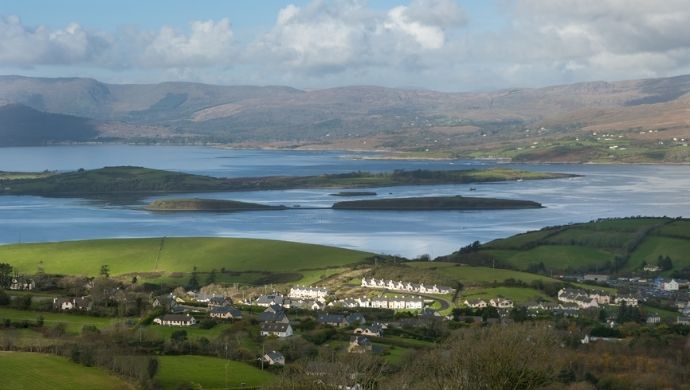 Whiddy Island sits near the head of Bantry Bay and historically was crucial to the protection of Bantry Bay’s deep-water anchorage.

The population of 450 in 1880 has now been reduced to 20 permanent residents, increasing dramatically during the summer months.

The 10-minute Ferry ride gives you great views of the Island, the Bay, and Bantry town and is lovely even in cloudy weather.

The island is a haven for wildlife, and without cars, it’s a pleasure to wander around and enjoy all the beautiful views of the nearby peninsulas. The ferry’s departure point is at the Marina opposite Bantry House, and there’s plenty of free parking around. 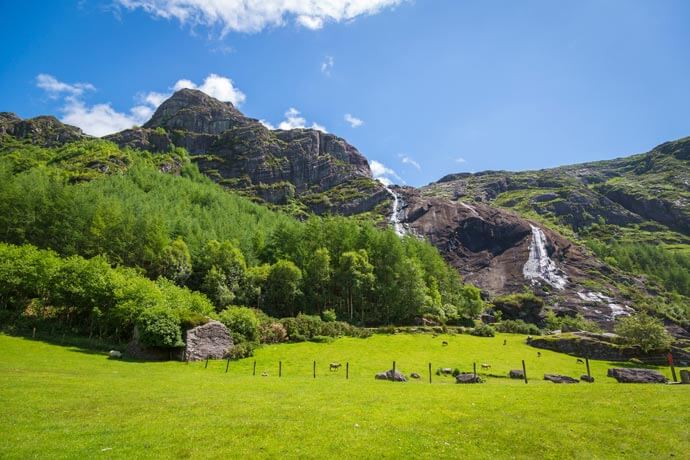 Gleninchaquin Park captures my imagination like nowhere else. On the one hand, it’s a privately owned farm, and on the other hand, there’s this magical place that formed after the Ice Age 70,000 years ago and has barely changed.

Six well-signposted routes take you around the farm, alongside a river, over the waterfall and into the upper valley, as well as a walk around the boundaries and the Heritage Trail.

It’s still a working farm, so keep a lookout for sheep on the upper levels. This is where you can take a dip in the rock pools or have a picnic, and if you have lunch at the top of the waterfall, it’s an unforgettable experience.

The best things to do in Glengarriff: What have we missed?

I’ve no doubt that we’ve unintentionally missed out on some brilliant things to do in Glengarriff in the guide above.

If you have something to recommend, whether it be a pub or a coffee shop, let us know in the comments below and we’ll check it out!

FAQs about things to do in Glengarriff

We’ve had a lot of questions over the years asking about everything from things to do in Glengarriff to dodge the crowds to what to see nearby.

What are the best things to do in Glengarriff?

Glengarriff Nature Reserve, Glengarriff Bamboo Park, Garnish Island and The Ewe Experience are all worth doing.

What is there to see near Glengarriff?

As Glengarriff is sat right on the stunning Beara Peninsula, you’re a stone’s throw from (literally) hundreds of things to see and do.

Thank you for your beautiful descriptions. Today we visited Garinish island and very much enjoyed it. We were highly impressed how carefully these gardens are maintained. The only thing which irritated us is the name for the Italian building: CASITA is a Spanish word! Maybe there is a special reason for this . . but there would be at least two matching translations in Italian. Best, Edith from Switzerlad