The topic of ‘what is the best pizza in Dublin’ is one that tends to fire up a fair bit of debate.

And for good reason – there are some incredible pizzarias in Dublin. In fact, some of the best restaurants in Dublin have an Italian edge to them!

From fancy spots where you’ll feel like you’ve boarded a plane to Milan to dive cafes where you can get a slice-to-go, there’s something to tickle most tastebuds.

In the guide below, you’ll find the best pizza in Dublin, with a mix places from across the city and the wider county. Dive on in!

Our favourite pizza in Dublin 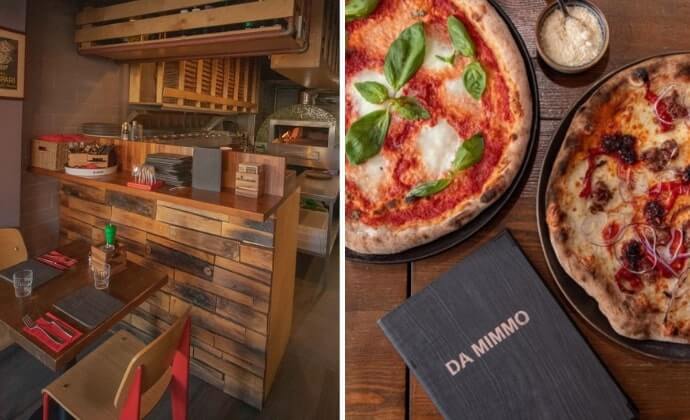 The first section of this guide is packed with what we think is the best pizza Dublin has to offer, from the magnificent PI to the often missed Paulies Pizza.

These are pizzarias in Dublin that we (one of the Irish Road Trip team) have munched away in at some point over the years. Dive on in! 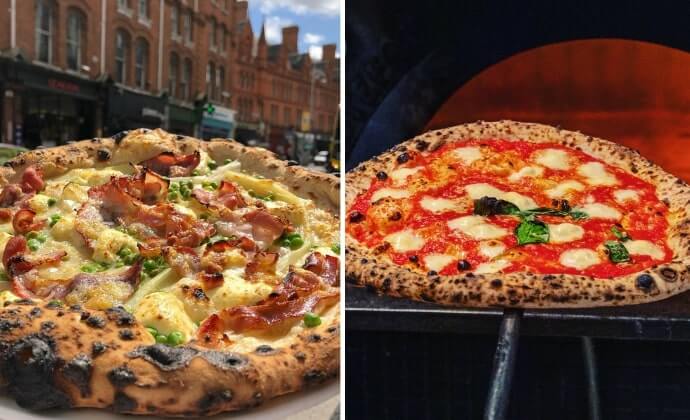 Back in September 2018, the Irish Times rather bombastically announced that PI is ‘The best pizza in Dublin’. How true is that grand claim?

Well, head down to their walk-in-only restaurant on George Street to find out! The interior is handsome and minimalist and their menu is reassuringly small.

Mixing flour straight from Naples alongside the finest and freshest Irish produce, their 12” pizzas are exceptionally prepared and taste great washed down with a craft ale.

Check out the Nduja in particular and see why it caught the eye (and taste buds) of so many adoring critics. 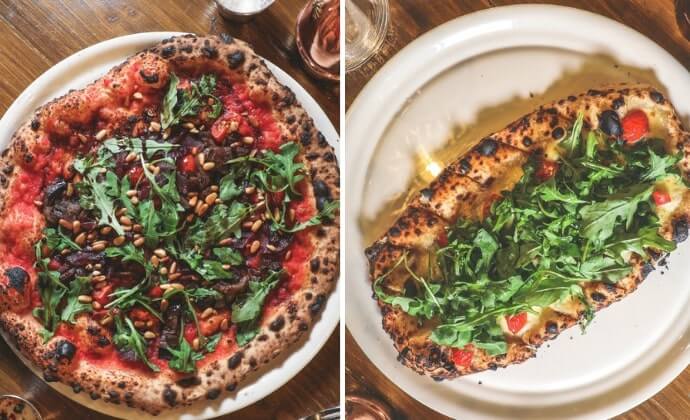 I mean, they might boast the most unimaginative name possible for a pizza restaurant in Dublin, but we’ll let them off because of the sheer brilliants of what they dish up.

Located on Aungier Street and just a short walk from St Stephen’s Green, they offer a selection of generously topped wood-fired pizzas crafted from fresh ingredients straight from Irish farms.

They’ll also drop a pizza to your door, depending on where you live, which is why they’re often regarded as the best pizza delivery Dublin has to offer. 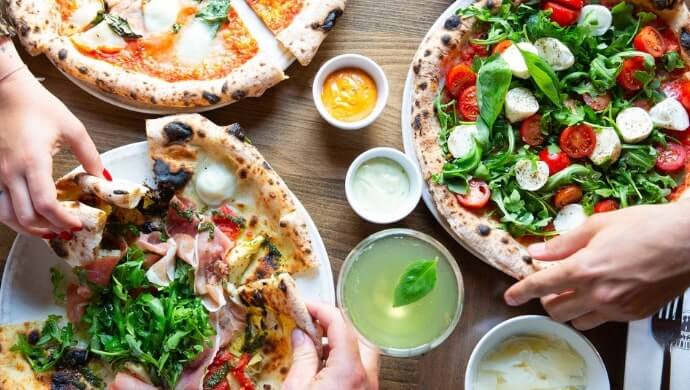 Opened back in 2010, Pauli’s Pizza does things the right way and tries to bring as close to an authentic pizza experience as possible. But their menu doesn’t just offer classic Neapolitan pizzas – they also offer a small selection of thin-crust New York-style pizza too.

Located on Grand Canal Street Upper in the shadow of the Aviva Stadium, their handsome facade stands out (especially against the dry cleaners next door).

Also, they don’t just offer pizza so if you’re not in the mood then they also do a small but superb selection of pastas and risottos. 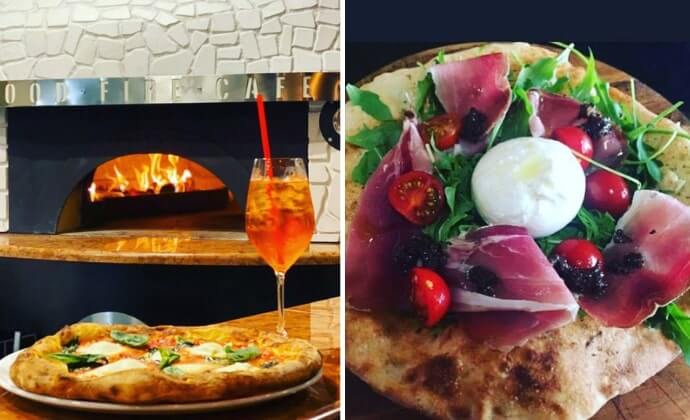 Sometimes it seems that your Italian restaurant isn’t even worth visiting if it doesn’t qualify itself by having ‘wood-fired’ mentioned somewhere. Well, Wood Fire Cafe on Blessington Street got rid of that particular problem by including it in their name!

And such has been their success that they’ve now opened a second restaurant closer to the city centre on Poolbeg Street. Like Pauli’s, they also offer a selection of pasta, risottos and antipasti but it’s the pizza that you come here for.

As well as Neapolitan and New York classics, they also offer a range of interesting house-created pizzas. For ultra-pretentiousness (or just a bit of fun), order their ‘Dubliners’ pizza and bring along a copy of James Joyce’s short story collection of the same name. 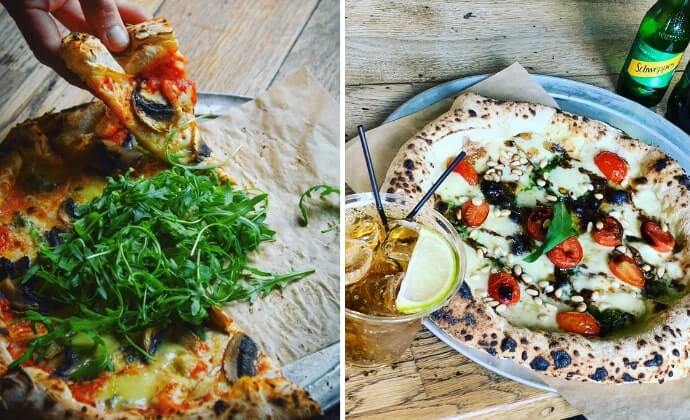 Their building’s cool and their pizza is delicious. What more could a hungry diner ask for? Inside BoCo is all exposed brick and low lights, with a touch of Scandi style but it’s their great pizzas that really do the talking.

Located north of the river on Bolton Street, it’s hard to miss the handsome three-storey corner restaurant and inside they offer a range of 13 exceptionally prepared pizzas.

Also, make sure to try every crust dip available and, if you have room, order the indulgent chocolate tasting board for dessert. This place is widely regarded as some of the best pizza in Dublin for good reason.

Other popular spots for pizza in Dublin 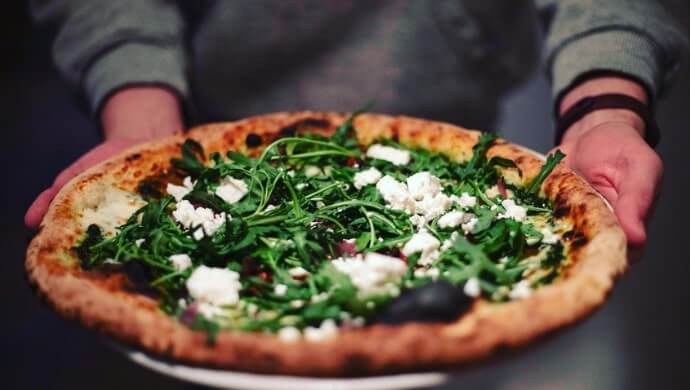 Now that we have what we think is the best pizza in Dublin out of the way, it’s time to see what else Ireland’s capital has to offer.

Below, you’ll find the insanely popular Da Mimmo and the iconic DiFontaine’s to the excellent Village Pizza Dublin and much more. 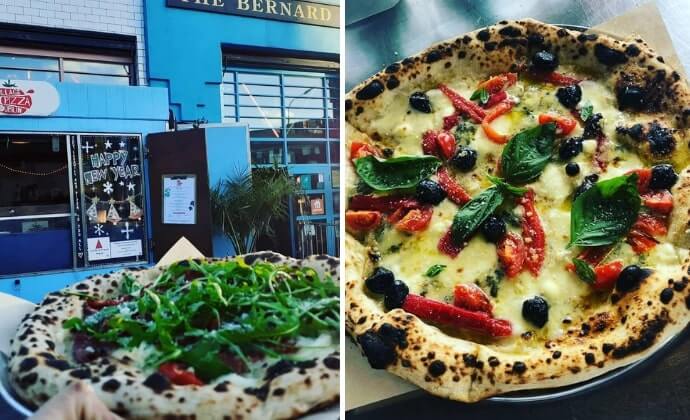 Wherever their blue truck goes, great pizza follows. Most recently seen at the Cross Guns Bridge in Drumcondra, Village Pizza Dublin is the culmination of years of cooking in Dublin’s best cafes, vegetarian restaurants and pizzerias.

And, of course, visiting Naples and watching the masters. Using as much seasonal Irish produce as possible, these guys make 48-hour fermented Napolitan style pizzas cooked to perfection in a 500-degree wood-fired oven.

One interesting note is that they also offer bianca white-based pizzas (without tomato sauce) – a slightly different option if you want to try something that often isn’t offered on most pizza menus. 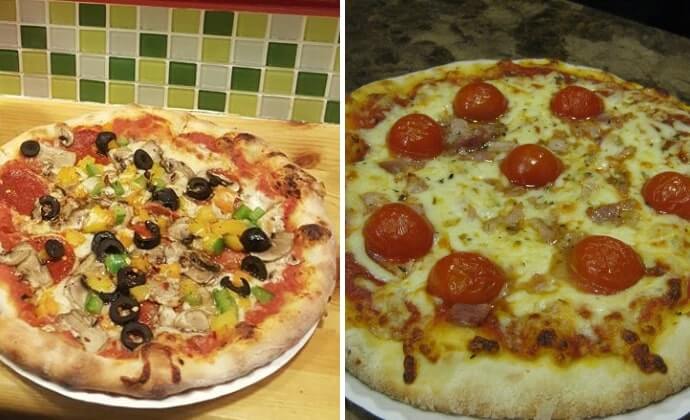 Il Capo is a classic of late-night no-frills pizza that’s bound to satisfy and that reputedly dishes up some of the best pizza in Dublin City. They do pasta here too, but it’s the bubbling, melted cheese pizzas that you come here for.

Build your own pizza or choose from their range of classics such margherita, pepperoni or calzone. Located in a small spot on Talbot Street just west of Connolly Station, it’s cosy inside and easy to find.

The success of this spot wouldn’t be possible without the friendly staff and the quality service keeps bringing customers back to Il Capo. The prices are great too, if you’re on a budget.

Don’t get tempted by the nearby McDonalds on Rathmines Road Lower. Just keep walking and go straight into Manifesto, a lovely award-winning neighbourhood Italian in the heart of Rathmines.

The brainchild of chef-owner Lucio Paduano, he hails from the pizza heartlands of southern Italy so it’s fair to say he knows a thing or two about cooking a mean pie!

I’m normally skeptical about places with long menus, but Paduano knows what he’s doing and all 20 of the pizzas on offer are exceptionally-prepared with the freshest local ingredients. Manifesto’s kitchen is 100% coeliac friendly and they also offer pizzas with vegan mozzarella.

Tino Fusciardi opened Da Mimmo on the northside (it’s on North Strand, not far from Fairview) in 2010 and it’s been thriving ever since.

Moving to its current location on North Strand Road in 2016, Da Mimmo’s is a homely spot that’s actually got a long history in Dublin, as Fusciardi’s Italian immigrant parents had run a nearby fish and chip shop since the early 1960s.

An authentic experience, there’s little pretension here and the local cheese and salami and cured meats are all sent from a butcher in Fusciardi’s family hometown in rural Italy.

As well as the long list of pizzas cooked in their enormous wood-fired oven, there’s also a ‘specials’ board which is always worth perusing! This is regarded as one of the best Italian restaurants in Dublin for good reason. 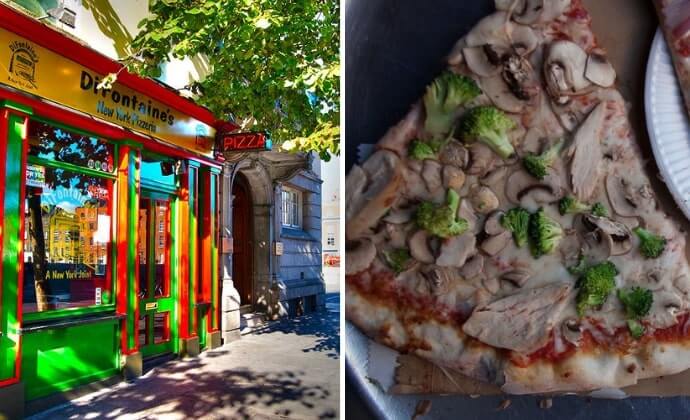 Is DiFontaine’s Pizzeria the best pizza in Dublin? There’s only one way to find out, but there’s a good reason why they’re still wildly popular after first opening way back in 2002.

After a few beers, there’s little better than getting stuck into a warm slice of pizza so if you’re in Temple Bar for a big night out then finish it by heading over to DiFontaine’s on Parliament Street for a slice or two.

If your appetite is a bit bigger then order one of their famous 20” pizza and choose from a range of New York-inspired toppings, including The FDR (sausage, onion and ricotta) and The Uptown (chicken, onion and mushroom). 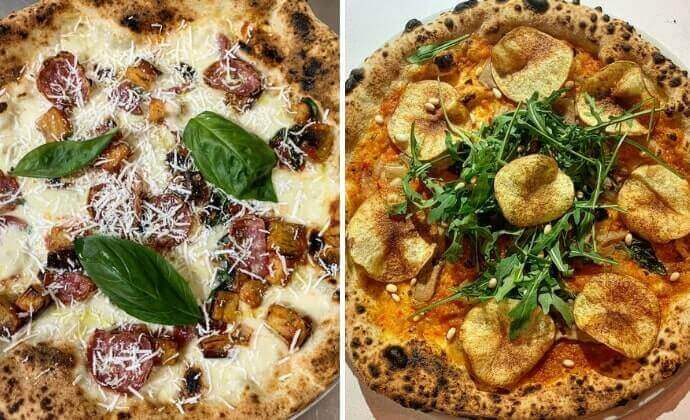 The first restaurant from owners Cian O’Colmain and Mary O’Mahony, Stone Pizza is another addition to the Stoneybatter food boom.

The interior is dark and stylish, while the menu is a simple list of pizzas, entrees and desserts. O’Colmain and O’Mahony say that they “just love pizza” so it’s probably a good idea to go straight to the pizza menu!

Their authentic Neapolitan style pizza is fired up in their custom-made oven, using fresh, locally sourced ingredients and there’s a wide range to choose from that includes a couple of white base pizzas too. 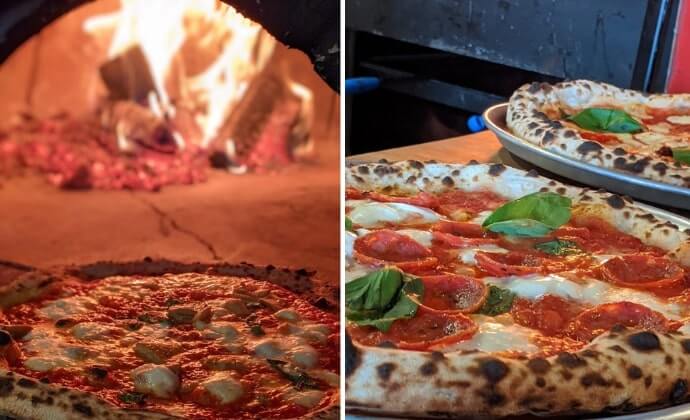 After operating as a pop-up for a couple of years, Ritas moved to their permanent home in Ranelagh on Elmwood Avenue Lower and has been thriving ever since.

Their mantra is “No fuss, just pizza” because they believe in doing one thing and doing it well. Who’s going to argue with that?

Open from Wednesday to Saturday from 4pm to 9:30pm and Sundays from 4pm until 9pm, your window isn’t huge to get stuck into these awesome pizzas so make a date asap!

I always like a spot that doesn’t take itself too seriously and you have to love the inventive names for their pizzas (The Vincent Van Goat, anyone?).

The best pizza in Dublin: Where have we missed?

I’ve no doubt that we’ve unintentionally left out some brilliant places for pizza in Dublin from the guide above.

FAQs about our favourite spots for pizza in Dublin

We’ve had a lot of questions over the years asking about everything from ‘What is the best pizza delivery Dublin has to offer’ to ‘What is the fanciest pizza restaurant in Dublin?.

What is the best pizza in Dublin?

In our opinion, you’ll get the best pizza in Dublin from Wood Fire Cafe, Paulies Pizza, Dublin Pizza Company and PI.

What is the best pizza delivery Dublin has to offer?

Going off Deliveroo reviews, the best pizza delivery Dublin has to offer is from Shovelhead Pizza, Cirillo’s, The Pizza Slice and Dolce Sicily.

Woodfire and wings in clondalkin fantastic pizza and chicken wings