There’s plenty of things to do in Newry and there’s endless places to visit closeby.

Divided by the Clanrye River in counties Armagh and Down, it makes a mighty base to explore from, especially if you’re fond of a good hike!

Below, you’ll discover what to do in Newry regardless of time of year – dive on in!

What we think are the best things to do in Newry 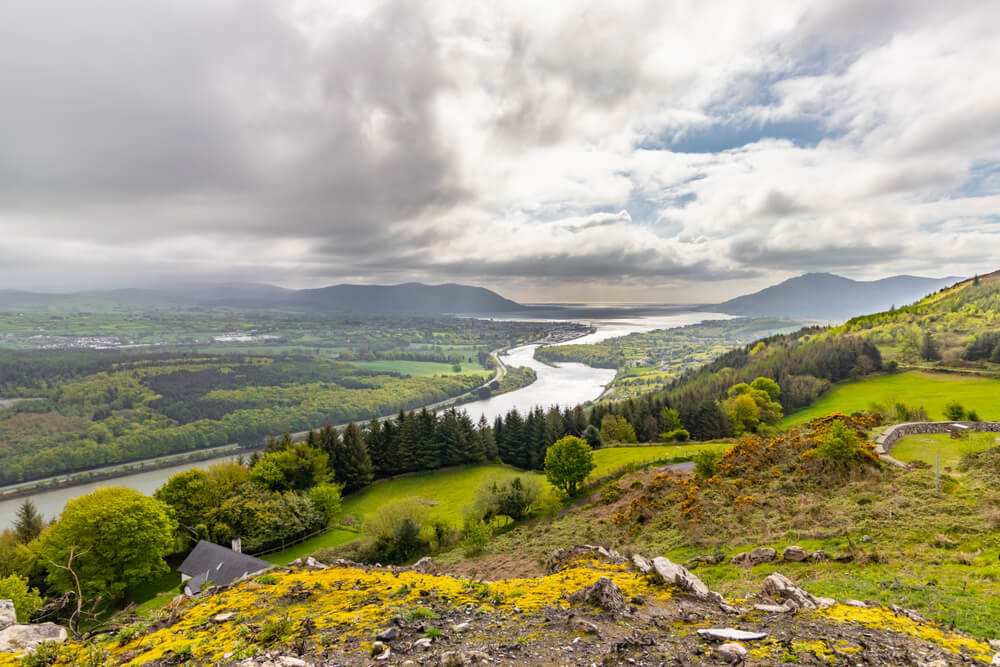 The first section of the guide is packed with our favourite things to do in Newry in Northern Ireland.

Below, you’ll find walks, great food and places to visit in Newry when it’s pouring down outside!

1. Start your visit with a caffeine kick from Grounded Espresso Bar 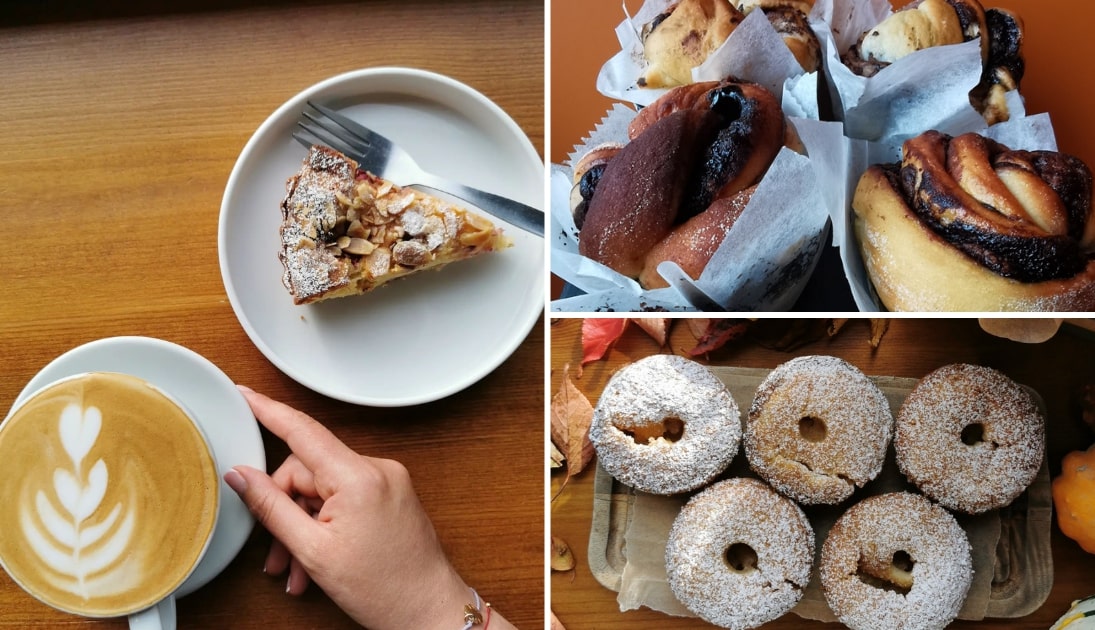 The best start to the day is kicked off with excellent quality coffee, as per the Grounded Espresso Bar at the Merchants Quay in the city.

You can also order a breakfast to set you up for the day here—sausage and bacon bap with a heap of brown sauce anyone?

2. Admire the architecture at Newry Cathedral 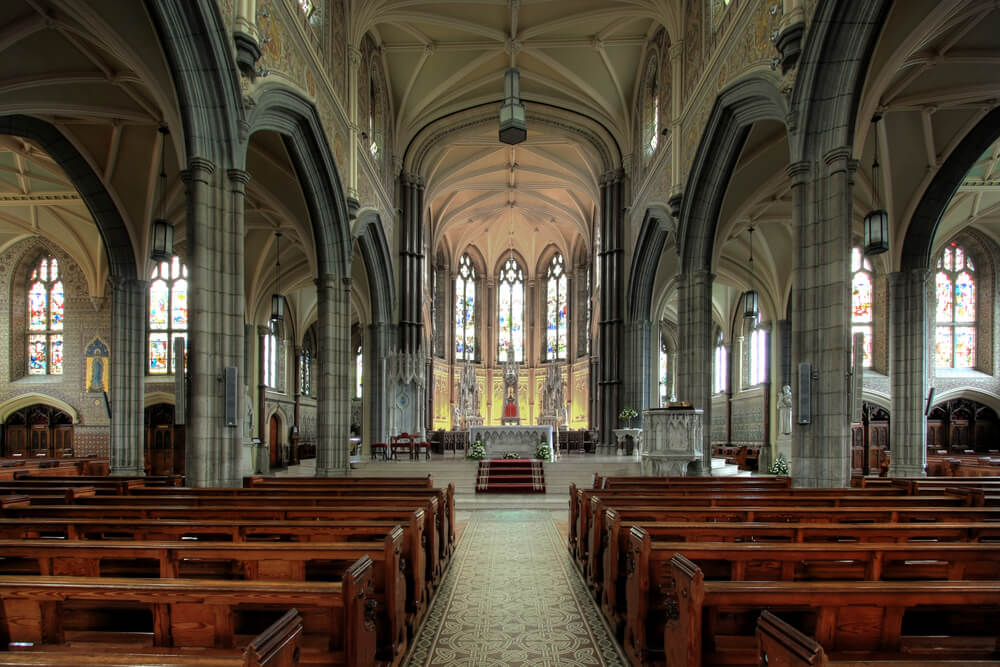 A visit to the town’s impressive cathedral is one of the more popular things to do in Newry. Newry Cathedral or the Cathedral of Saint Patrick and Saint Colman, is a Roman Catholic cathedral which acts as the seat of the Bishop of Dromore.

It was designed by Thomas Duff and work on its construction began in 1825. Although it was completed in 1829, work continued to enlarge and beautify the cathedral throughout the late 19th and early 20th centuries.

It is a Grade A listed building and made from local granite, and the interior decorate is said to be second to none in Ireland.

3. Spend a rainy morning at Newry and Mourne Museum 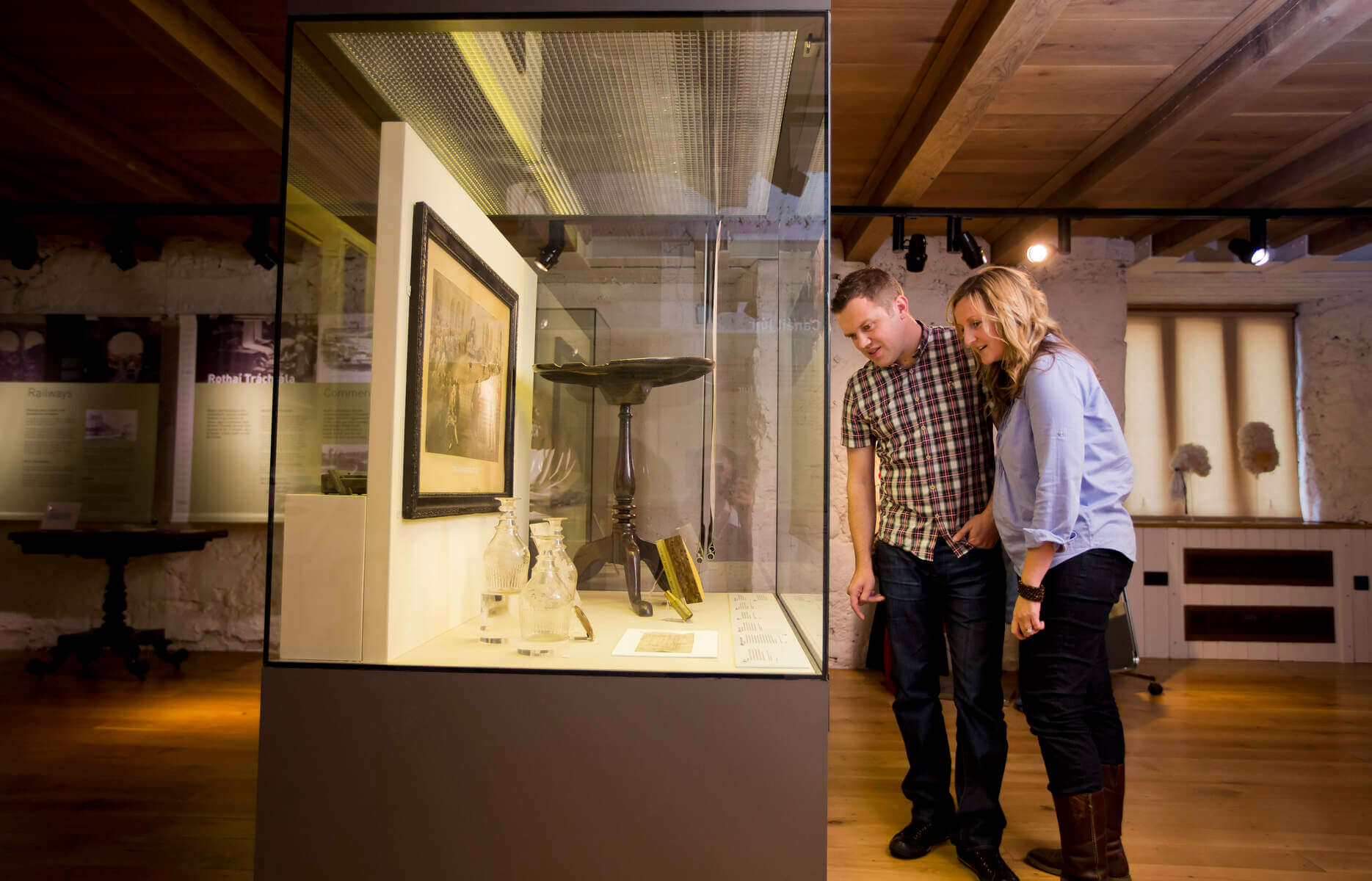 Newry and Mourne Museum first opened in 1986 moved to the larger premises at Bagenal’s Castle in 2007, where you will find it now.

The castle was built in the environs of the site of a Cistercian abbey and was an early example of a fortified residence, which was sympathetically restored according to drawings from a survey of the castle completed in the late 16th century.

In the museum, you’ll find prehistoric exhibits and artefacts from Newry’s time as a merchant town, the working life of the area and the modern experience of living in a border region.

If you’re looking for things to do in Newry when it’s raining, this is a great option.

4. And a sunny one in the grounds of Derrymore House

Derrymore House is a National Trust property—a late 18th century house thatched in what is called the gentrified vernacular style.

It sits at the heart of a late 18th century landscape park and dense woodland, where the area provides a sanctuary for wildlife and a lovely place to stroll.

Derrymore was the home of the MP for Newry from 1776, Issac Corry, and he commissioned John Sutherland the leading landscape gardener of the day, to carry out improvements.

The gardener enhanced the existing woodland by planting thousands more trees and these days, you can enjoy the mature oak, chestnut, pine and beech trees that dominate the woodlands.

5. Take a spin up to Bernish Viewpoint and then Ballymacdermott Court Tomb 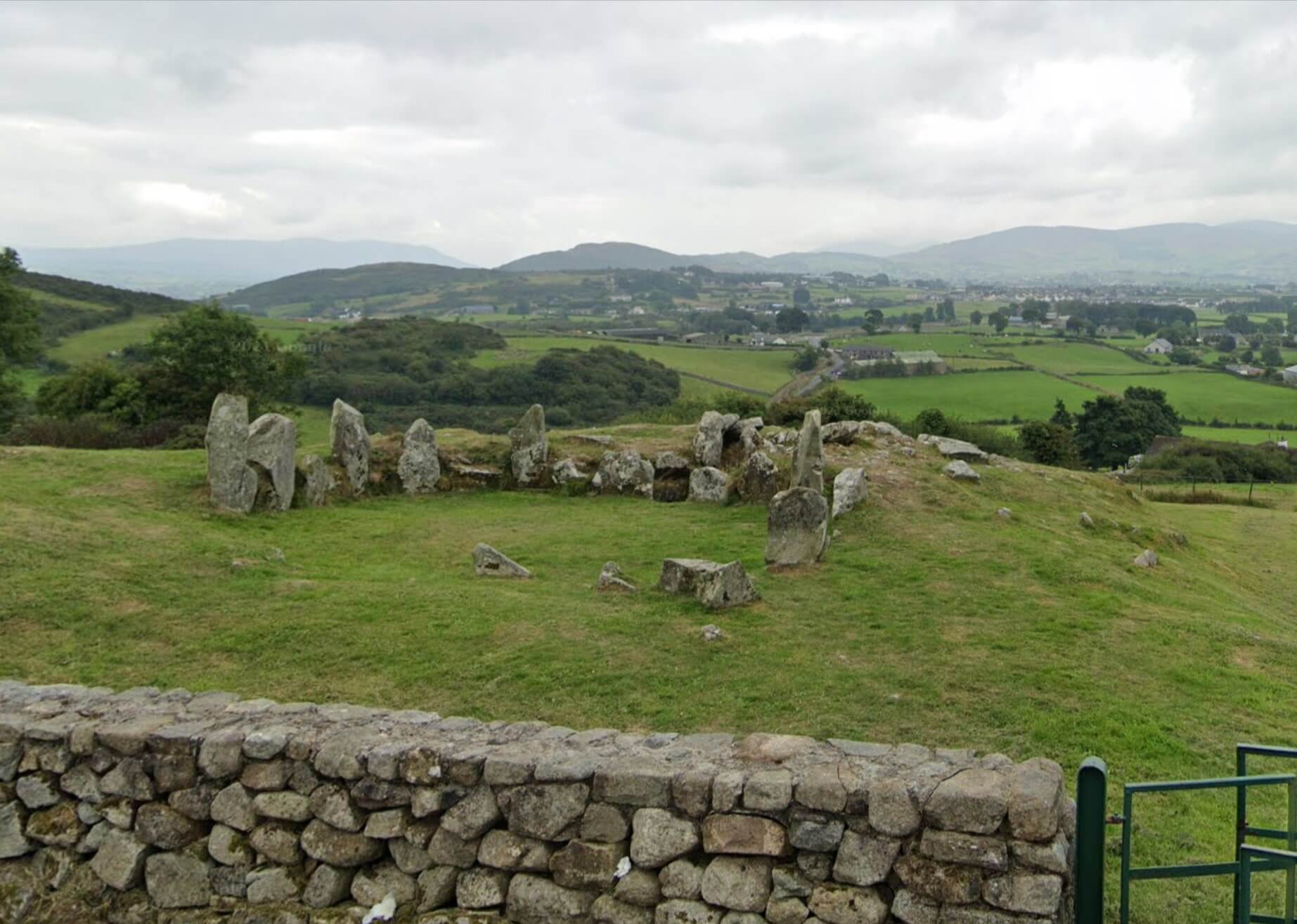 Bernish Viewpoint offers terrific views over the local area and has picnic benches sited there, making it a great place to stop by for a picnic on a sunny day.

The tomb is dated between 4000 and 2500 BCE and from here, you are rewarded with excellent views of Slieve Gullion and the smaller hills of the Ring of Gullion Area of Outstanding Beauty as well as the Mourne Mountains.

6. Soak up the views from Flagstaff view point

If you’re looking for things to do in Newry on a fine morning head up to Flagstaff view point. This popular view point on Fatham Hill close to Newry offers wonderful views over Carlingford Lough, the Mourne Mountains and the Cooley Mountains.

Where does the name come from? Flagstaff comes from the fact that once upon a time, flags used to be hoisted on the hill to announce that boats had arrived at Carlingford Lough.

Other popular things to do near Newry 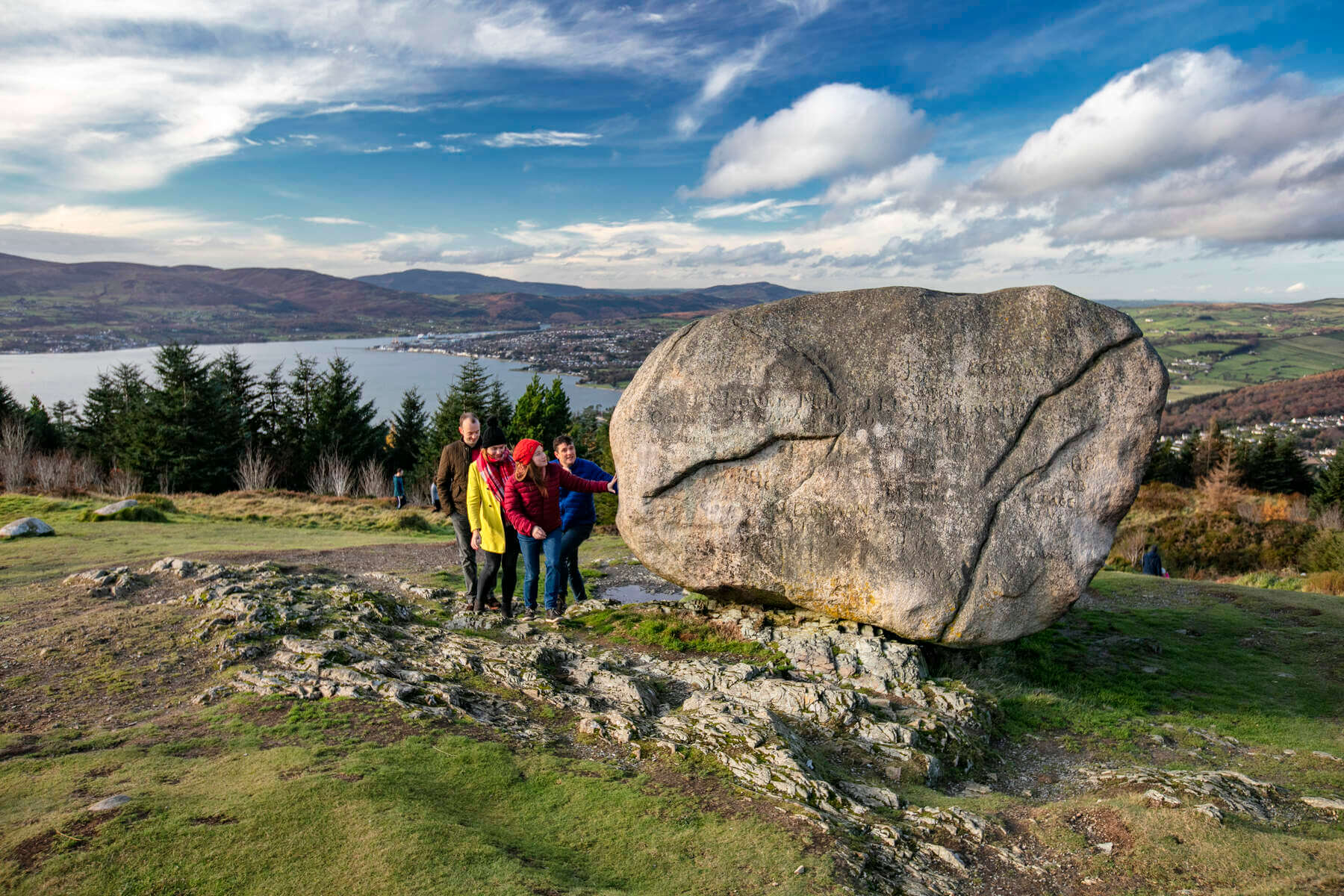 Now that we have our favourite things to do in Newry out of the way, it’s time to see what else the area has to offer.

Below, you’ll find everything from hikes and walks to scenic drives, cycle routes and much more. 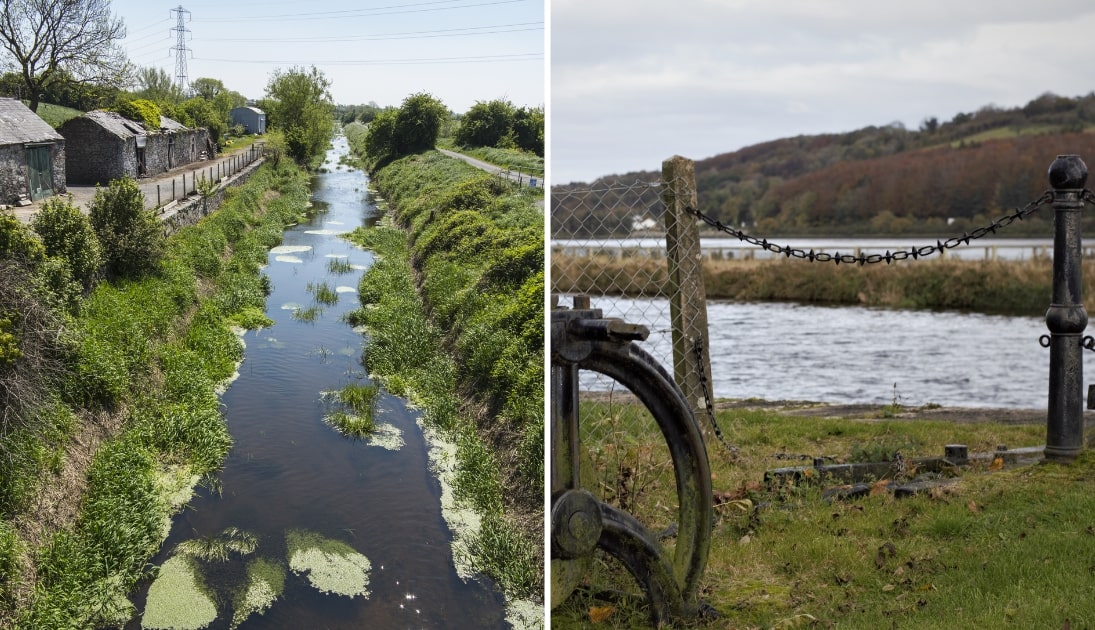 If you’re after some active things to do in Newry it’s worth tackling the Newry Canal Way which covers 20 miles and runs from Portadown to Newry along the restored towpath of the former Newry Canal.

The linear walking/cycle path has a flat, level surface that is suitable for all. Points of interest to note include Moneypenny’s Lock House, the old locks, and the bird and wildlife you will see in abundance.

Look out for the swans and the herons that have made the canal their home. Facilities include the Scarva Visitor Centre Tearooms open during the summer months from Easter to the end of September (closed Mondays), where there are also public toilets. 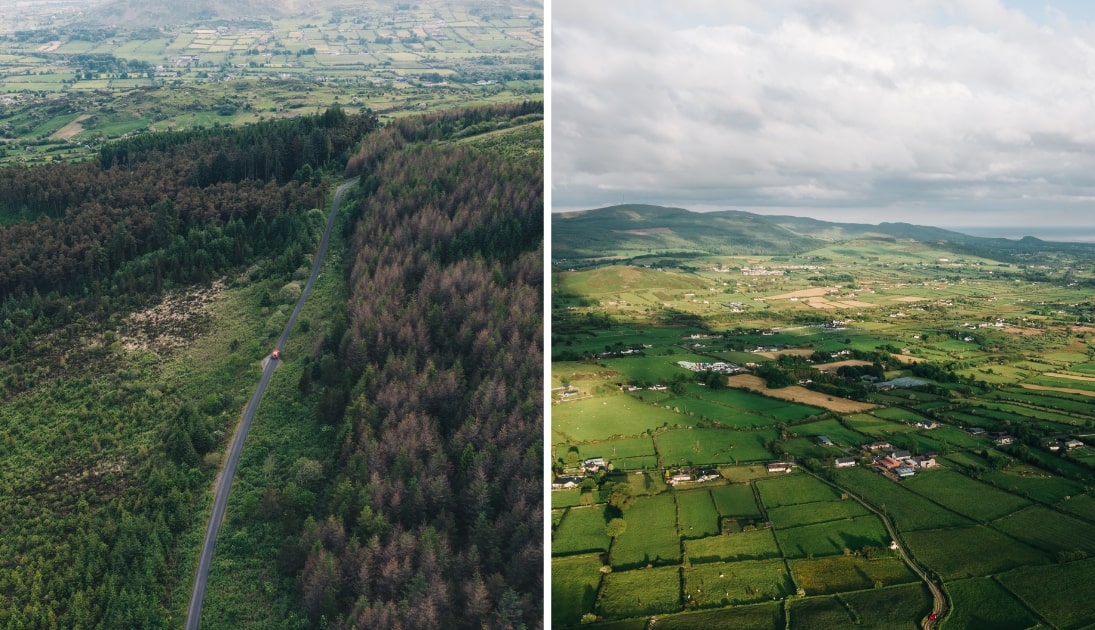 The drive out to Slieve Gullion Forest Park is worth the trip alone as there is much for the visitor to stare at in amazed wonder. It is about a fifteen minute drive.

At the park, there are tranquil woodland trails, and stunning views across the Ring of Gullion, Mourne Mountains, the Cooley Peninsula and the Armagh Drumlins.

For the kids, there’s an Adventure Playpark and a Giant’s Lair to explore, as well as an outdoor performance stage, picnic benches and an ornamental walled garden.

Kilbroney Park Forest is one of the most overlooked places to visit in Northern Ireland, in our opinion!

There is also a two-mile forest drive that showcases the panoramic views over Carlingford Lough and a play park with a children’s playground and tennis courts, along with an information area and onsite café.

The forest drives takes you to a car park, from where you can climb up to see the Cloughmore Stone which sits some 1,000ft above Rostrevor.

4. Head off on the new Game of Thrones Studio Tour (20 minutes’ drive) 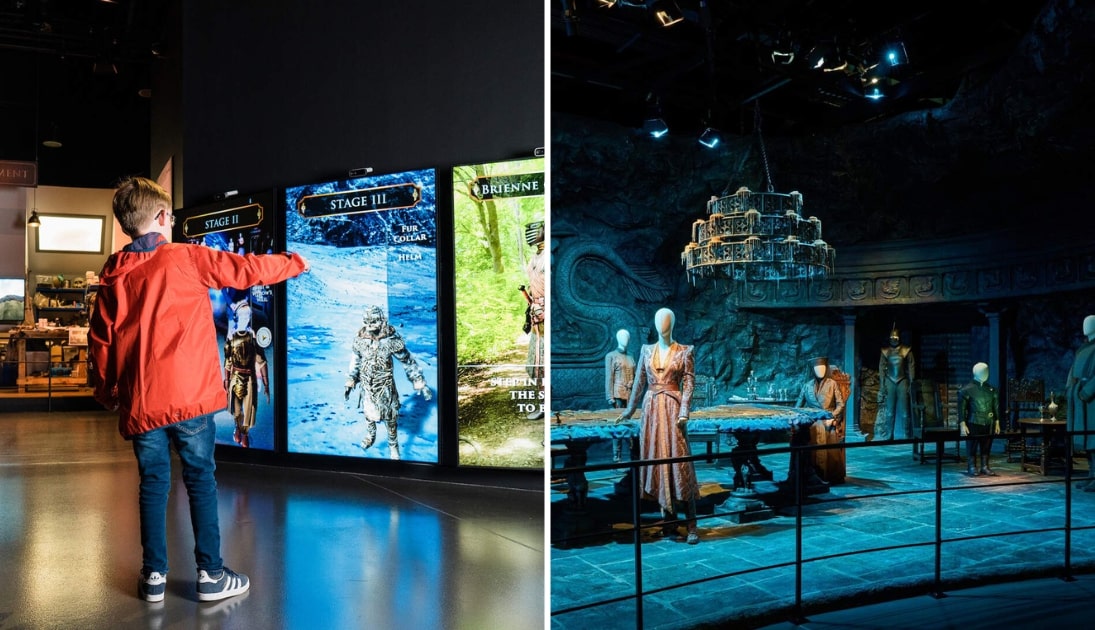 The official HBO Game of Thrones studio tour is located at the filming location of Linen Mill Studios in Banbridge, Northern Ireland, and here you will get to step behind the scenes of The Seven Kingdoms and beyond.

It’s an experience of the world of Game of Thrones like never before, that sets out how the TV series was created and brought to life on screen and includes memorabilia from the show.

Expect the see everything from the initial concept sketches for King’s Landing, Castle Black and Winterfell along with the intricate and detailed designs by the award-winning costume department that helped to create and define the show’s characters.

5. Try one of many nearby walks 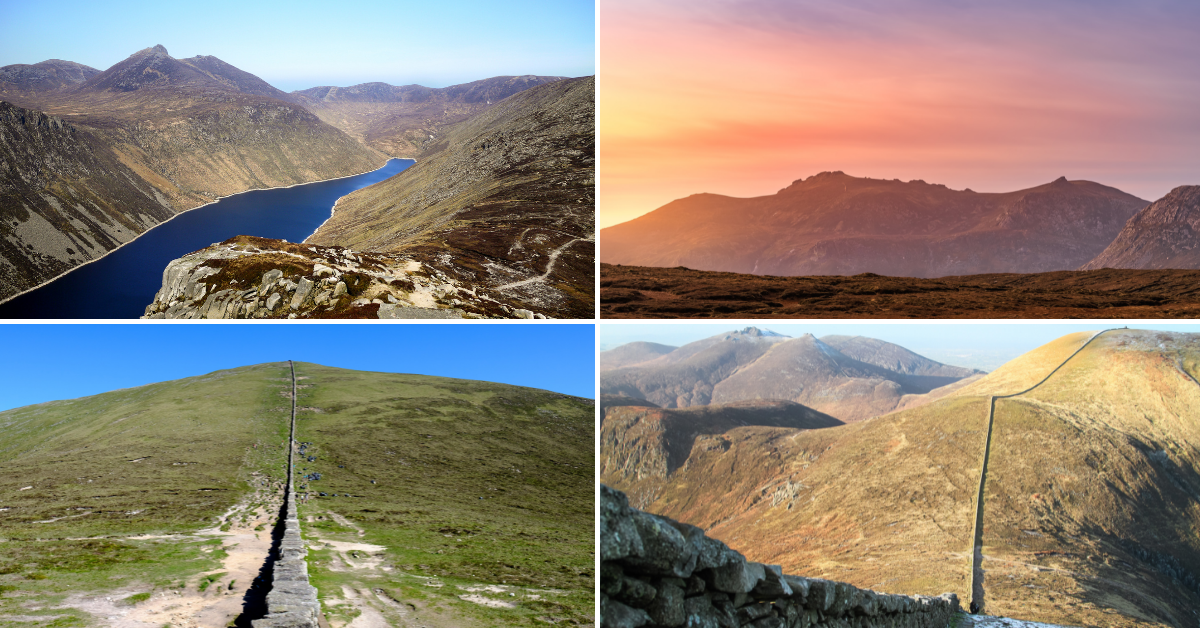 There’s endless walks close to Newry. Some of the more popular trails are Slieve Foye, the Annaloughan Loop Walk and Ravensdale Forest, each of which are a 25-minute drive away.

FAQs about what to do in Newry

We’ve had a lot of questions over the years asking about everything from ‘Where’s good to see close by?’ to ‘What’s a good rainy-day activity?’.

What are the best things to do in Newry?

What are good things to do near Newry?

You’ve endless options, from Slieve Gullion and Carlingford to the Mourne Mountains, Kilbroney Forest, the Silent Valley and much more.