A visit to the Butter Museum is one of the more unique things to do in Cork.

A museum dedicated to butter—are you kidding?! No, it’s no joke and we’re here to tell you that the golden wonder that is butter is indeed worthy of a museum…

The story of butter in Ireland is one that weaves in social, economical and religious history, making it a fascinating topic to explore.

In the guide below, you’ll discover everything you need to know about the Butter Museum in Cork, from its history and when it’s open to what to visit nearby.

Some quick need-to-knows about The Butter Museum 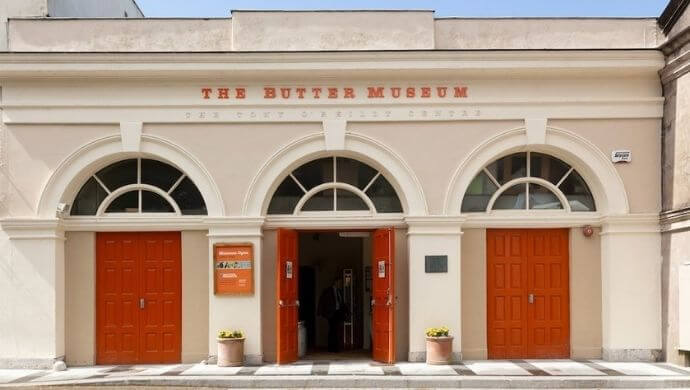 Although a visit to the Butter Museum in Cork is fairly straightforward, there are a few need-to-knows that’ll make your visit that bit more enjoyable.

The Butter Museum is situated in O’Connell Square, Shandon, Cork city, near to the Roman Catholic Cathedral of St Mary and St Anne. It is housed in what was the former Butter Market.

The museum is open Sundays 11am to 4pm, and Mondays to Saturdays 10am to 4pm, although the attraction is closed at present because of the Covid-19 pandemic (times may change – check here for most up-to-date info).

A history of the Butter Museum and butter-making in Ireland 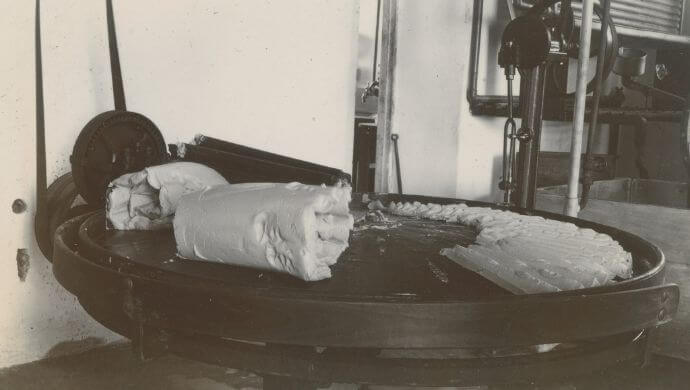 The history of the Butter Museum in Cork is a long and interesting one, and I’m not going to do it justice with a couple of paragraphs of text.

Bewlo, you’ll find a brief history of the the Butter Museum – you’ll discover the rest when you walk through its doors.

The building that houses the present-day museum dates back to 1849. The Shandon was the largest Shambles (a medieval term for an open-air butchery or place where food is sold) in Ireland, and the butter exchange building was located within this commercial area of the city.

Butter and dairy in Ireland

In the 19th century, Cork was the largest exporter of butter in the world, with the product exported as far as Australia and India.

This stems from a long Irish tradition of dairy making. The weather in Ireland allows farmers to grow large quantities of grass over a long season and research has shown that dairy products were an important food source as far back as 4000 to 2500 BCE.

Dairy in Ireland in modern times

Today, the dairy industry is still a key component of the Irish economy, providing welcome employment in rural areas. Commercial production of butter started in the 19th century, and butter made from Ireland’s grass-fed cattle is a highly sought-after product in today’s health conscious times. 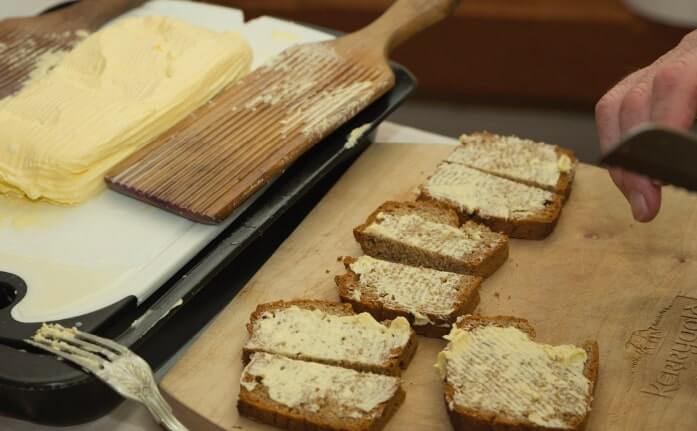 The Butter Museum Tour is one of the more unique things to do in Cork City when it’s raining, and the rave reviews online speak for themselves.

Here’s a handful of need-to-knows about the tour. For up-to-date info on opening hours, visit their website here.

Although the Butter Museum Tour shouldn’t take any longer than 45 minutes or so, you should allow an hour, at least, for your visit to the museum.

The museum showcases the important role the butter trade has played in Ireland over the centuries and its displays highlight the 19th century international Butter Exchange, the domestic production of butter, and more recently, the operations of the Kerrygold company.

A fine bit of history

What you will also see are elements of the Irish social, domestic and commercial history, and exhibitions that educate visitors about the various elements of butter making – from dairy cattle farming, to documents and the artifacts of the commercial butter trade such as the old steel churns. Be sure you check out the container that holds 1,000-year-old medieval bog butter…

Things to do near the Butter Museum

One of the beauties of the Butter Museum in Cork is that it’s a short spin away from a clatter of other attractions, both man-made and natural.

Below, you’ll find a handful of things to see and do a stone’s throw from the Butter Museum (plus places to eat and where to grab a post-adventure pint!).

Exploring the history of butter is bound to make your mouth water. Make your way to the nearby English Market where you’ll be able to buy some of the delicious, locally produced butter and spread it on some artisan sourdough for maximum enjoyment. Other delicacies include fish, shellfish, sweets and organic meat. 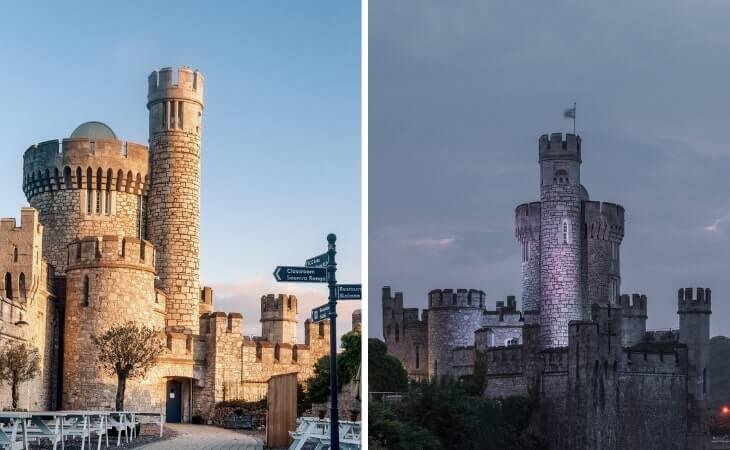 Still in the mood for history? Blackrock Castle is a castellated fortification some two kilometres from Cork city centre, the original building constructed in the late 16th century to protect the population from pirates and invaders.

There’s an observatory too, and if you’re feeling peckish the Castle Cafe is home to some of the best brunch in Cork. 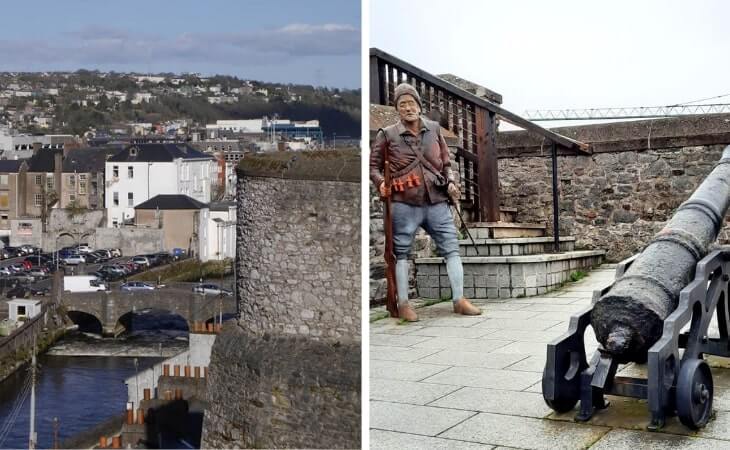 First built in 1601, the earth, stone and timber Elizabeth Fort was attacked two years later when a revolt took place sparked off by the death of Queen Elizabeth 1. When English reinforcements arrived, the people of Cork were forced to pay for its reconstruction. A stronger stone fort replaced the old building in the 1620s and it is this you see today. Guided tours are available throughout the week.

The incredible three-spire St Finn Barre’s Cathedral was completed in 1879, its location on a site where Christian use dates back to the 7th century when there was a monastery on site. Finbarr is the patron saint of Cork and lived in the 6th century. Legend has it, his remains were brought to the city and enclosed on a shrine located on the site of the cathedral. 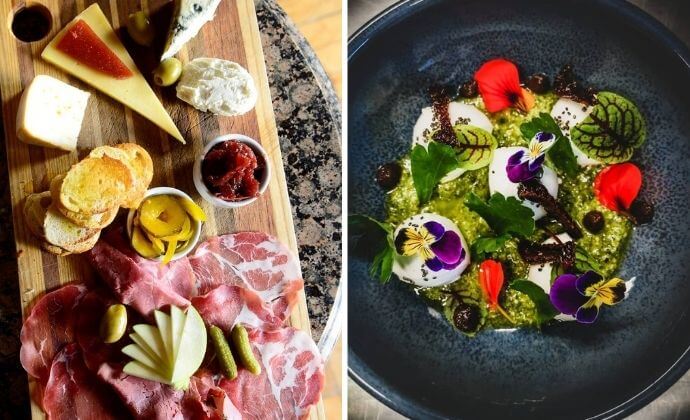 You don’t have far to go for fine food and drink in Cork. Toast yourself with the Murphys or Beamish, and there’s plenty of craft beer on offer as well as a wealth of restaurants making the most of Cork’s local produce. Here’s a few guides to hop into:

Built in the early 1800s, the impressive 19th century Cork Gaol offers an insight into prison life in days of old. Life-like wax figures show you what cell dwelling looked like, and you can also read the graffiti the prisoners left behind.

If none of the above tickle your fancy, there are plenty of walks in Cork to head off on and there are loads of beaches near Cork City to visit.

We’ve had a lot of questions over the years asking about everything from is the Butter Museum worth visiting to what the tour involves.

Is the Butter Museum in Cork worth visiting?

Yes, it’s well worth a visit. This museum shines a light on a corner of Irish history that many will have never been exposed to previously. It’s a great rainy day attraction and the tour is excellent.

What is there to see at the the Butter Museum?

The museum showcases the important role the butter trade has played in Ireland over the centuries and its displays highlight the 19th century international Butter Exchange, the domestic production of butter, and more recently, the operations of the Kerrygold company.

What is there to see near the Butter Museum?