A visit to the see the round tower in Kells (and the magnificent High Crosses) is one of the more popular things to do in Meath amongst visiting history buffs.

Located inside the grounds of Saint Columba’s Church in the village of Kells, these ancient structures have successfully stood the test of time.

And, while it’s often the Kells round tower that steals the show, the High Crosses really are stunning.

In the guide below, you’ll discover everything from the history of the Kells round tower to where to park and what to see nearby.

Some quick need-to-know before you visit Kells round tower 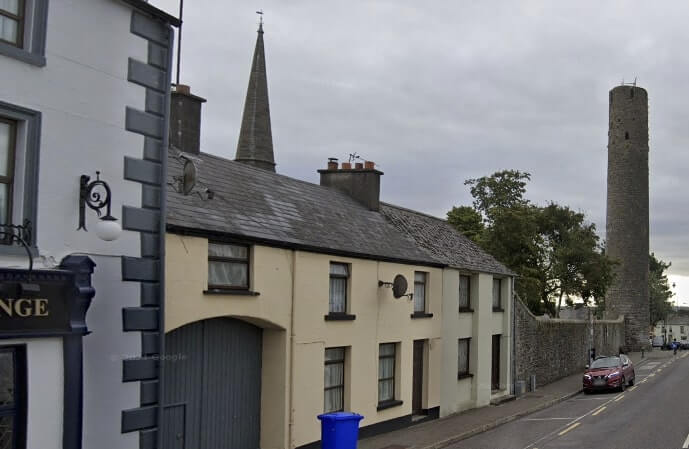 Although a visit to the Kells round tower is fairly straightforward, there are a few need-to-knows that’ll make your visit that bit more enjoyable.

The site itself is part of Saint Columba’s Church. There is ample parking on Cannon St (here on Google Maps). If you park here, it’ll also make things easier for those with mobility issues, as the Kells high crosses and tower are a short walk away.

The Kells round tower is located within walking distance of the road and is easily visible from the church gates. There is no internal access, as these towers were built without staircases. You can walk right up to the tower, it is not fenced off in any way, and much of the stonework is original, with very few minor repairs.

There are five High Crosses in Kells for you to discover, with four of them located within the grounds of St. Columba’s Church. The fifth, Market Cross, is located near the Old Court House Heritage Centre in Kells.

5. Part of the Boyne Valley Drive

Kells is one of many stops on the brilliant Boyne Valley Drive, which takes you to many of the best things to do in Louth and Meath.

About Kells Round Tower 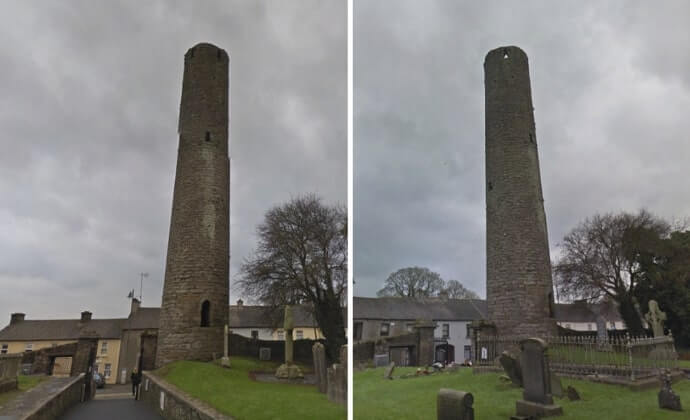 Why and when was the 85ft round tower in Kells built? Had the monks gone mad when they built a tower without stairs?

These are some of the questions that perplex many visitors who gaze up at this ancient structure.

One of many round towers in Ireland

In fact, the Kells round tower is one of many similar towers that are dotted across Ireland (another can be found in Glendalough in Wicklow).

The towers were built with multiple functions in mind and served as such for many hundreds of years.

It had several purposes

One purpose was to act as a belfry, from where the monks could call to mass all those who could hear the bell ring. Also, from its unusual five top windows, the tower served as a means to watch the roads entering Kells, providing an effective early warning system.

The tower also formed part of Kells defensive strategy against marauders or those who intended ill towards the peaceful religious settlement.

The tower was designed to be accessible only via ladders, with each floor needing a ladder of its own that could be removed quickly when required. Thus preventing the attackers from harming the inhabitants.

About the Kells high crosses 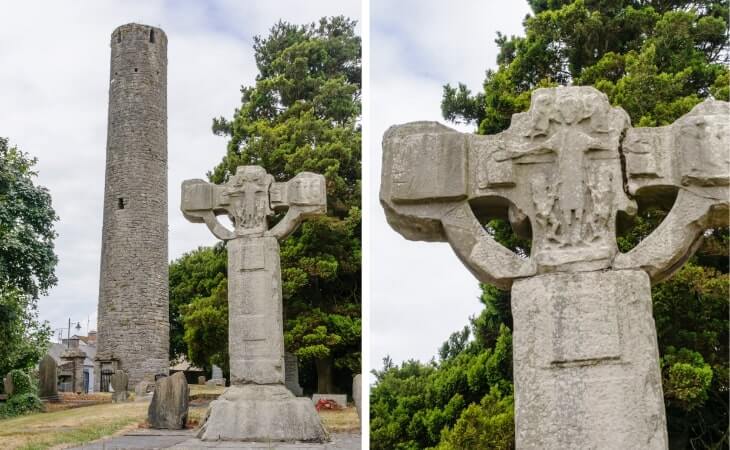 Kells in County Meath has held a special place in the hearts of those fascinated by the Book of Kells, as it is an epicentre of first millennia religious activity.

At St. Columba’s Church, you can easily study the first of four of these impressive early Celtic crosses.

Carved early in the 9th century, and erected by the famous monks of St. Colmcille’s in Iona, Scotland, these high crosses now form a giant outline of a cross over Kells itself.

Sadly, there is little that remains of the North Cross, as only the base is intact. It is assumed that owing to the size of the base, that this cross would have been smaller than its counterparts. The ringed bands from the carver are similar to those of a cross at Nobber graveyard, and so it’s believed to have been made by the same stonemason.

Also known as the ‘Cross of Saint Patrick and Saint Columba’, this cross is the earliest of all the crosses, and bears the Latin inscription “PATRICII ET COLUMBAE CRUX”. The cross depicts Adam and Eve with their sons Cain and Abel, and a raven bringing bread to Saints Paul and Anthony.

Almost complete, missing only the very top of the cross’ halo. The East Cross is incomplete in its ornate carving, however, you can clearly see the scene of the crucifixion. The cross is remarkable in that it illustrates ‘how’ the High Crosses were carved.

Located in the churchyard, is a single column with a base depicting Moses and Aaron, the Pillar of Fire, Baptism of Christ, Marriage at Cana, Christ the child being bathed, and Magi question Herod. The Celtic-cross top has been severely damaged by Oliver Cromwell’s soldiers in the 17th century.

Once located in the east of the churchyard, it now resides outside the Old Court House Heritage Centre. This cross is the most decorative, and well worth seeing. With many carvings, some of which are the Massacre of Innocents, of a man spearing a stag, King David, and a Latin inscription for you to translate.

Things to see near Kells High Crosses and tower

One of the beauties of Kells High Crosses is that it’s a short spin away from many of the best places to visit in Meath.

Below, you’ll find a handful of things to see and do a stone’s throw from Kells round tower (plus places to eat and where to grab a post-adventure pint!). 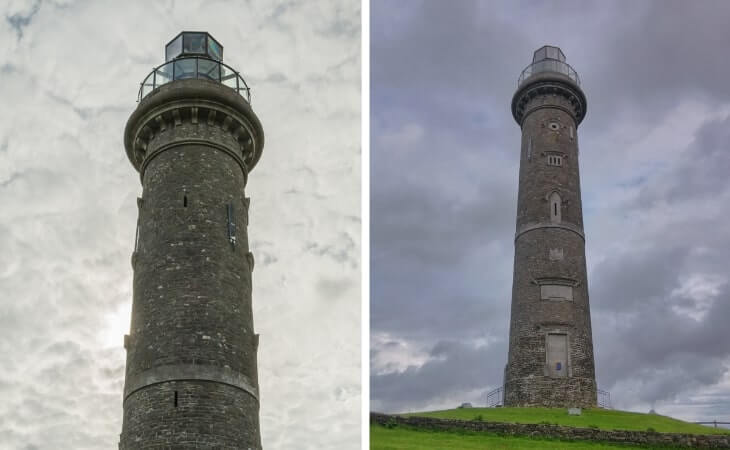 An 18th-century spire that towers into the Kells skyline, The Spire of Lloyd has a mysterious beginning and has become a symbol of wealth and power. It’s also located near a pauper’s graveyard dating to the Great Famine. Climb the tower on a Bank holiday Monday, and take in the surrounding view. 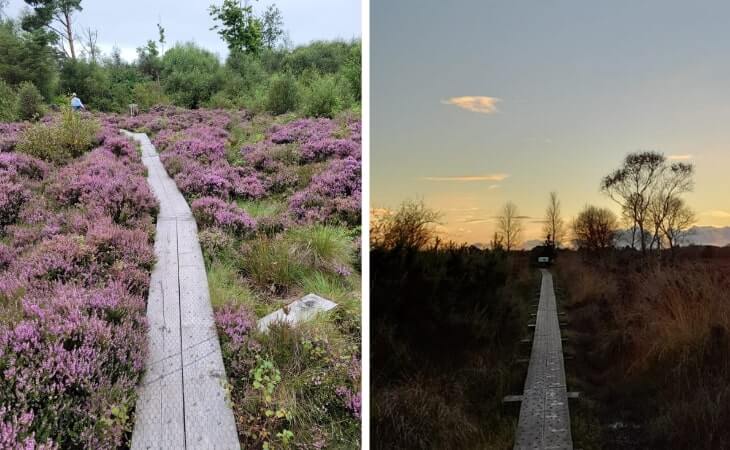 A rare and exceptional ‘raised’ Irish bog, this natural habitat is home to a variety of birds and wildlife. Bogs have been hugely influential on archaeology, as they’ve preserved many artefacts lost to them over the centuries. Check out our feature article on The Girley Bog Walk for more. 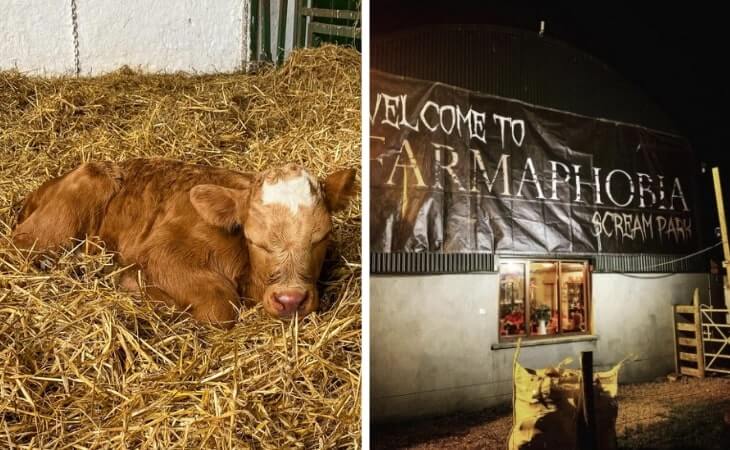 Photos via Causey Farm on FB

Kings turned farmers, the Murtagh family have connections to the ancient Kings of Meath. But, these days they run a 300-acre farm that host team-building exercises and amazing events throughout the year. They even have a spooktacular October event called Farmaphobia. See our piece on the brilliant Causey Farm. 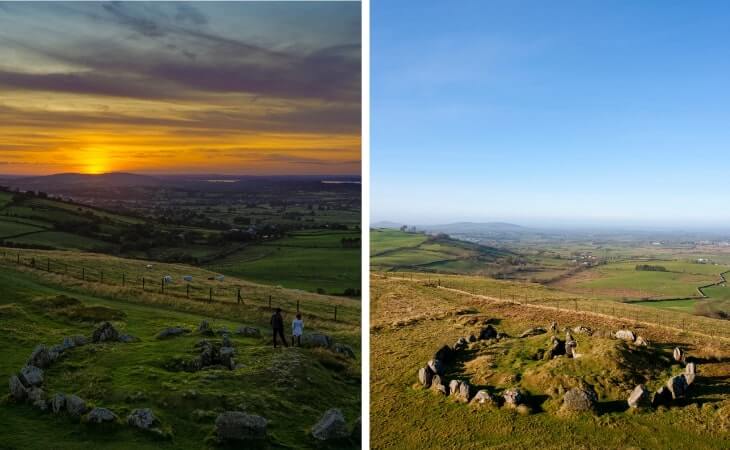 Burial cairns don’t get more impressive than the mighty Loughcrew. With Neolithic artwork to decorate the walls, these chambers were built around approximately 3000BC, and you can explore them today! For a unique experience, come here for an equinox sunrise or sunset. Head over to our in-depth article to help plan your visit.

FAQs about Kells High Crosses and round tower

We’ve had a lot of questions over the years asking about everything from ‘Why was the round tower in Kells built?’ to ‘How old are the Kells High Crosses?’.

How old is the round tower in Kells?

The round tower in Kells in County Meath dates back to the 10th century.

Are Kells High Crosses and round tower worth visiting?

Yes! If you’re exploring Meath and you’re fond of history, you’ll find an excellent slice of ancient Ireland in Kells, just waiting to be discovered.