Annagassan Beach is arguably one of the most overlooked beaches in Louth.

Once the scene of marauding Viking invaders, Annagassan Beach is a far more relaxed place these days (thankfully!) and its quaint setting across from the Cooley Peninsula makes for one of Louth’s more alluring spots.

But while that history is never far away, there are plenty more reasons why people keep returning to Annagassan.

In the guide below, you’ll find info on everything from where to get parking to what to do while you’re there.

Some quick need-to-knows about Annagassan Beach 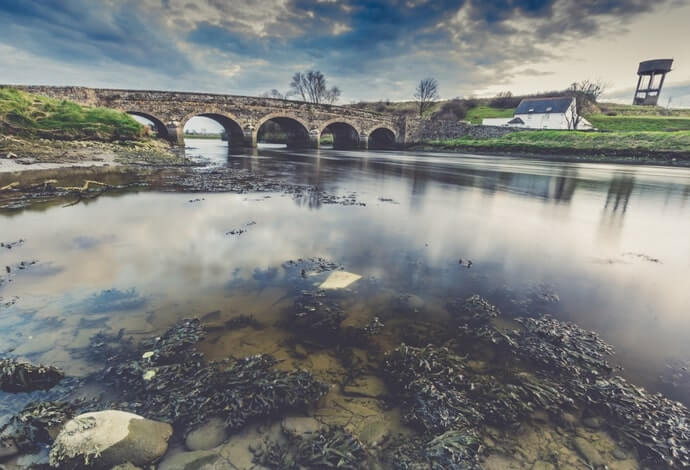 The Bridge to the Beach (via Shutterstock)

Although a visit to Annagassan Beach is fairly straightforward, there are a few need-to-knows that’ll make your visit that bit more enjoyable.

Annagassan Beach lies on the east coast of County Louth and is located almost halfway between Dundalk to the north and Drogheda in the south.

This a small place so there isn’t a ton of parking available, but you will find space just over the bridge and to your left-hand side as you approach the harbour (here on Google Maps).

There doesn’t appear to be too much info (after much searching!) as to whether there are lifeguards around during the summer months here or if it’s safe to swim. However, Salterstown Pier is a popular swimming spot that’s only a little further south of Annagassan Beach.

As I mentioned in the intro, there’s some serious history surrounding this place! One of the first major Viking settlements in Ireland, Annagassan’s quiet shores hide what was probably quite a violent past over 1000 years ago. Also, check out the 200-year-old Annagassan Bridge which you’ll be crossing if you’re heading here from the north. 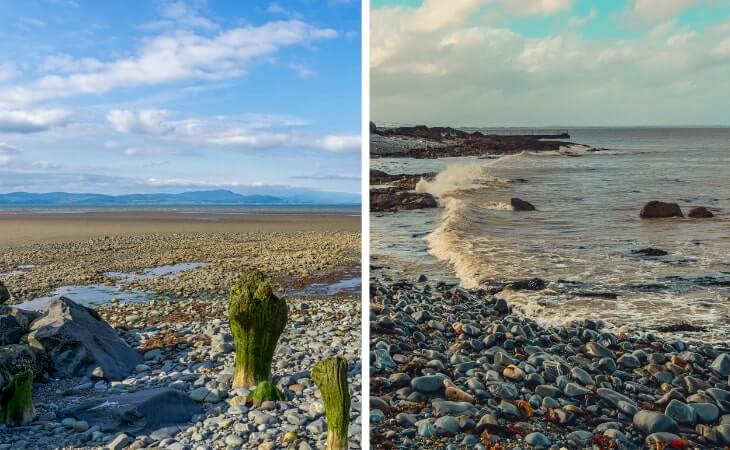 Spanning five arches and constructed of limestone, the impressive bridge is a fine introduction to the history of Annagassan but this village’s story goes back way further than that!

The Vikings first settled in Annagassan in 841 AD and built Linn Duachaill, a substantial ship enclosure that is believed to have been the first Viking settlement in Ireland.

From this settlement, the Vikings unsurprisingly plundered the surrounding areas for all they were worth. For a good half-century, Linn Duachaill was an important base for launching raids into the Irish interior and on Britain too.

After 50 years of trouble, the local Irish people finally expelled the Vikings from Linn Duachaill in 891. The Vikings later returned in the 10th century but by this time Annagassan had been eclipsed by Dublin and they soon abandoned Linn Duachaill altogether.

It’s a much quieter place these days and anyone who visits will get the chance to enjoy the stunning views across the water of the Morne Mountains (maybe that’s why the Vikings chose Annagassan?!).

Things to do at Annagassan Beach

There’s a handful of things to do in and around the beach at Annagassan, regardless of the time of the year.

Below, you’ll find info on walks and food to legend and more. Dive on in!

1. Flick off your shoes and socks and saunter along the sand

Those beautiful views across Dundalk Bay towards the Cooley Peninsula are certainly one reason why you’ll want to check out Annagassan Beach. With the distant jagged outline of the rising in the distance, it’s a pretty special scene so flick off your shoes and socks and take in the views and the sea air while you go for a stroll along the sands.

It isn’t a huge beach but don’t let that put you off stretching your legs! And if the weather’s playing ball, you’ll be treated to a spectacular sunset as the warm evening rays fall onto the mountains over the water.

2. Discover the story of the Viking winter base

Amazingly, the discovery of Linn Duachaill was only made in 2011! And with no major settlements or roads passing through, it’s meant that it’s stayed in pretty pristine condition for centuries.

Archeologists think that there may have been around four or five thousand Vikings here with up to 200 ships. With Dublin developing more as a trading port, the scene at Annagassan was more of a raiding base and the activities that took place here would have been far more infamous.

So while Linn Duachaill eventually failed, the discovery of the site nonetheless gives us great insight into life in Medieval Ireland.

3. Round off your visit with food at the award-winning Glyde Inn 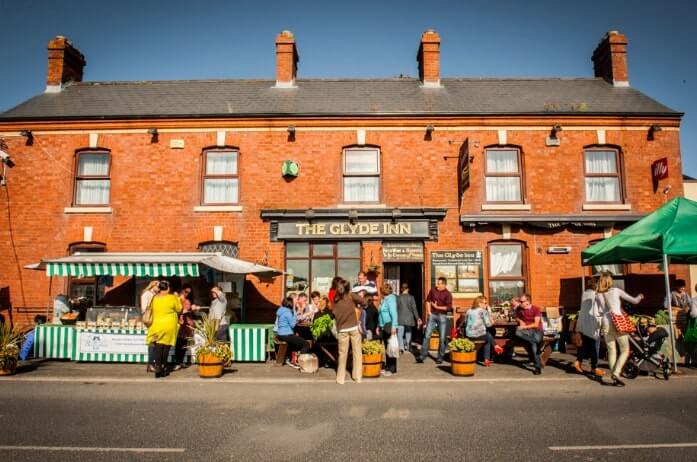 Photo via the Glyde Inn

You’d be in for a long day if you try and find anything bad at all about the Glyde Inn! This award-winning seafood restaurant is perfectly perched on the Annagassan waterfront and offers stunning views to go with your meal.

Located in a beautiful old building, The Glyde is a large space with room for up to 100 guests inside its brick walls. Choose from a cracking fish and chips, the appropriately-named Viking Burger and their epic seafood platter featuring Crab Claws, Razor Clams, Cockles Carlingford Oysters, Mussels and whelks.

And in the summer, make sure you sit outside and take in all the views!

Places to visit near Annagassan Beach

One of the beauties of Annagassan is that it’s a short spin away from many of the best places to visit in Louth.

Below, you’ll find a handful of things to see and do a stone’s throw from Annagassan (plus places to eat and where to grab a post-adventure pint!). 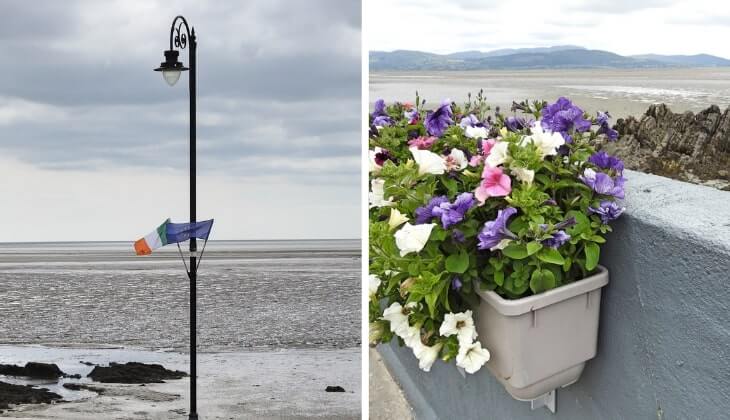 A Special Area of Conservation thanks to its nature and wildlife, Blackrock Beach near Dundalk is a fine sandy beach backed by a pleasant promenade. A 15-minute drive from Annagassan, there are a few more options for shops and cafes here and is a good spot if you prefer a slightly livelier waterfront. 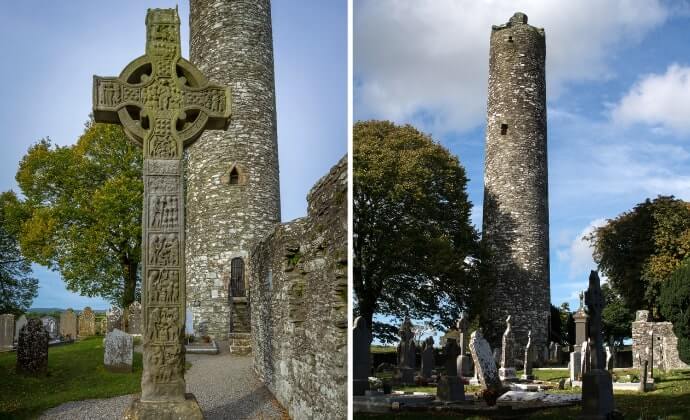 With its medieval ruins, stone crosses and 1000-year-old round tower, Monasterboice has been a site of interest for hundreds of years and is only a short 15-minute drive from Annagassan Beach.

It’s thought that the monastic settlement was founded in the late 5th century by Saint Buithe, however the site fell into ruin around the 12th century. 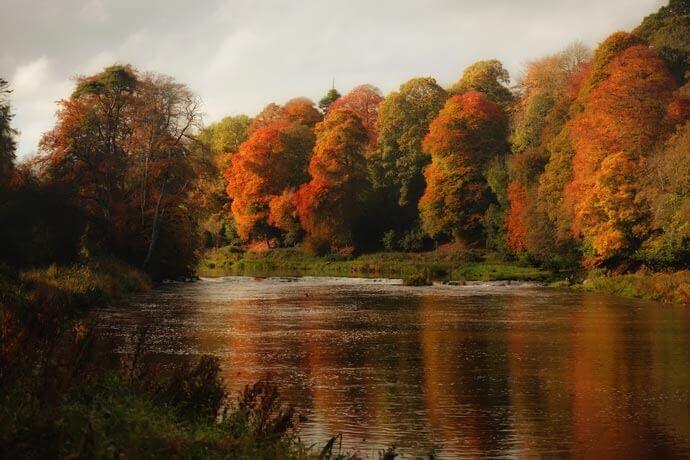 Speaking of staggering history! Newgrange boasts a remarkable prehistoric landscape dating back to the Neolithic Period (10,000–4,500 BCE) and has been a UNESCO World Heritage Site since 1993. Part of the Brú na Bóinne complex, you can visit Knowth and Dowth while you’re there, too.

We’ve had a lot of questions over the years asking about everything from ‘Where is there to park?’ to ‘What’s the story with the Viking link?’.

Is Annagassan Beach worth visiting?

If you’re in the area, it’s a nice place for a ramble, but we wouldn’t go out of our way to visit. However, if you pair a visit with food at the Glyde Inn it’s a nice way to spend an afternoon.

Is it safe to swim at Annagassan?

We can’t find any info (after much searching!) as to whether it’s safe to swim here, so either check locally when you get there or avoid the water altogether.