Many guides online to the ‘best cities in Ireland’ confuse towns with cities.

Ireland has a handful of cities and, while there are plenty of lovely towns in Ireland, cities are a different ball-game altogether.

Below, you’ll get an overview of the main cities in Ireland, from Belfast and Dublin to Derry, Waterford and more.

The best cities in Ireland 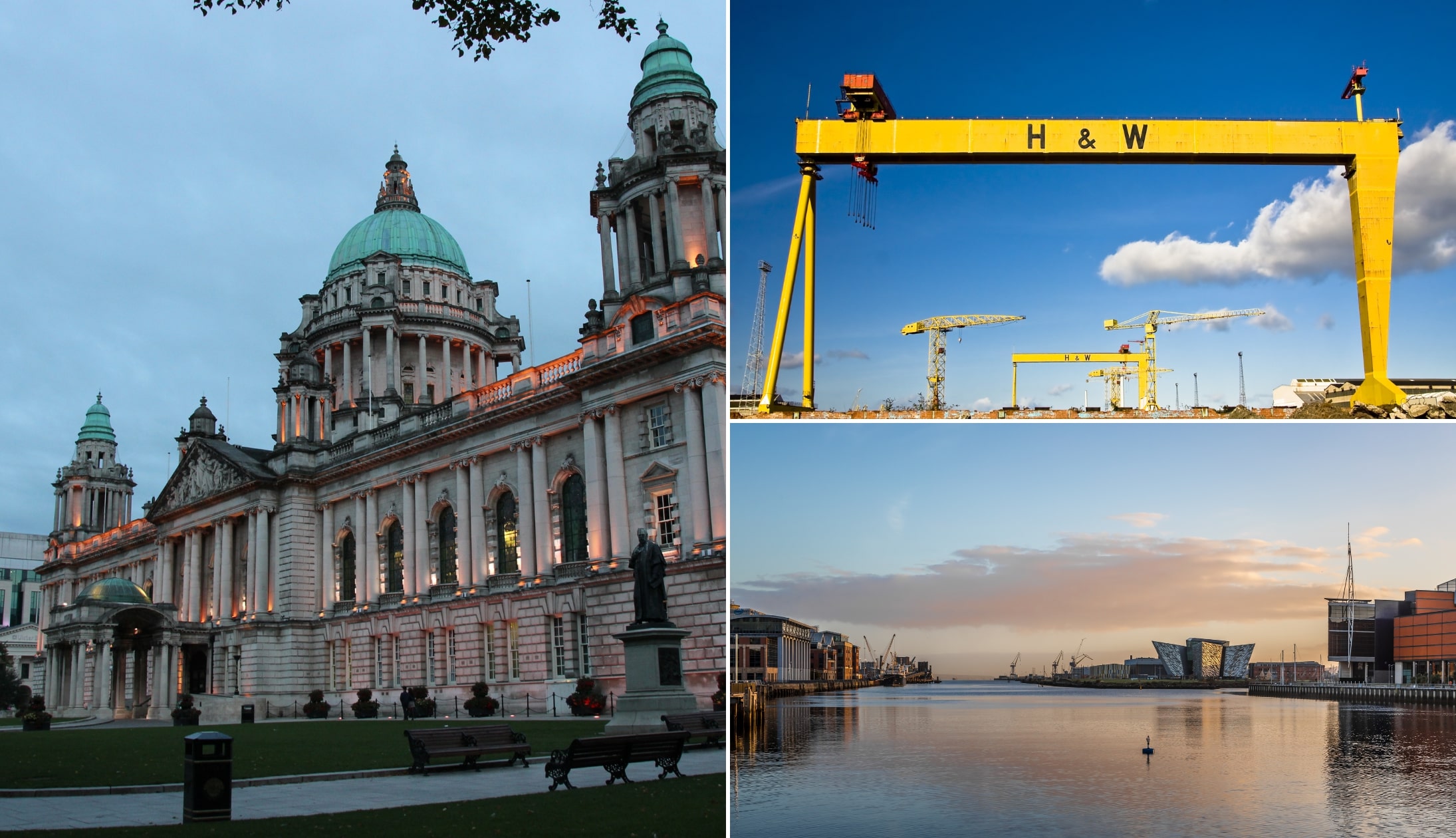 There are six cities in Ireland; Kilkenny, Galway, Waterford, Limerick, Cork and Dublin and there are five cities in Northern Ireland; Armagh, Belfast, Derry, Lisburn and Newry.

We’ll take you through our favourites below (see our guide to the differences between Ireland vs Northern Ireland if the above has you confused). 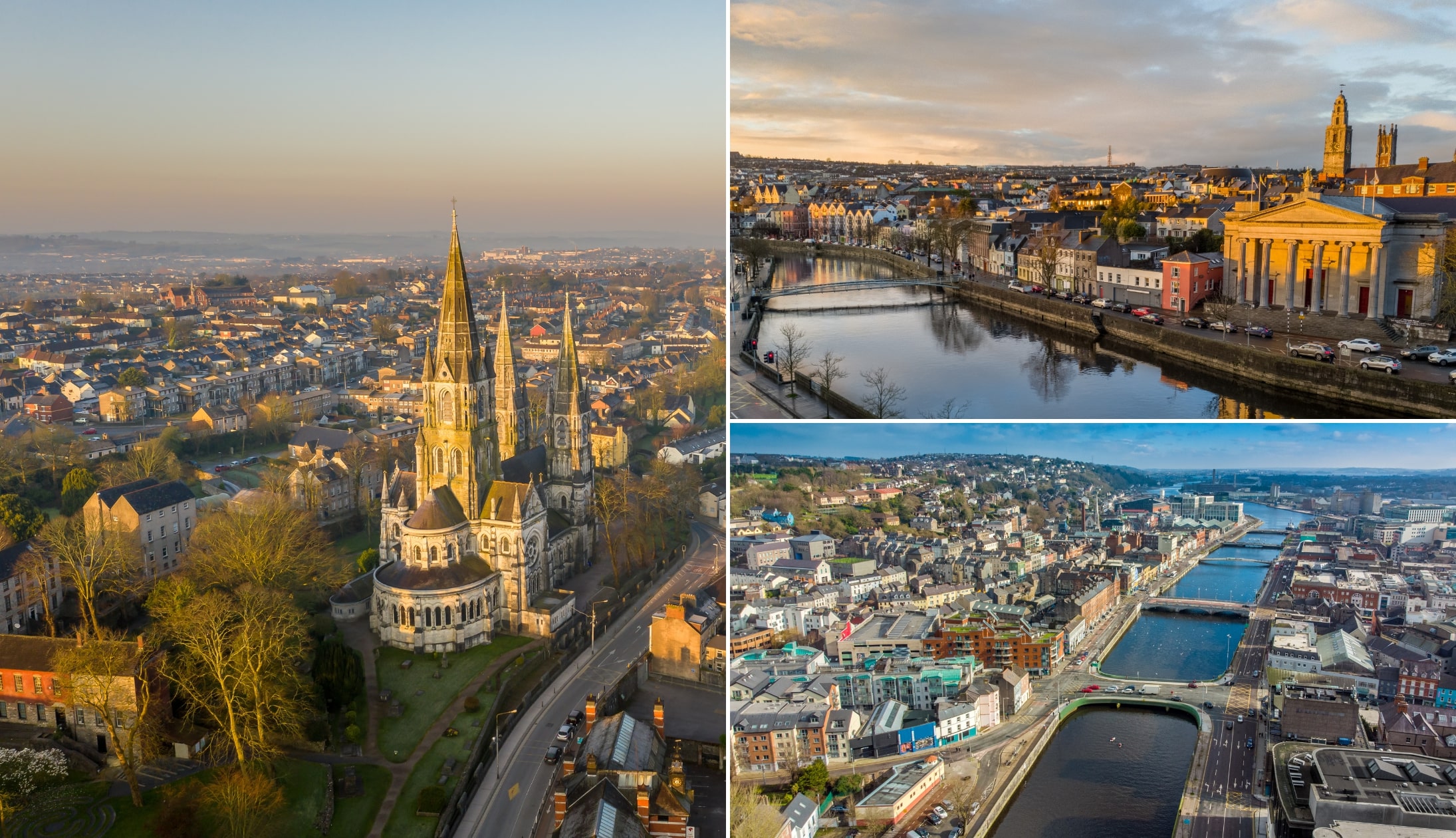 Cork City is one of the most popular cities in Ireland, with its riverside location and unforgettable attractions. It is Ireland’s second city, with a population of 581,231, occupying an island between two branches of the River Lee.

The river continues eastward into beautiful Lough Mahon before reaching the sheltered but significant seaport of Cork Harbour.

Related read: See our guide to the best things to do in Cork City 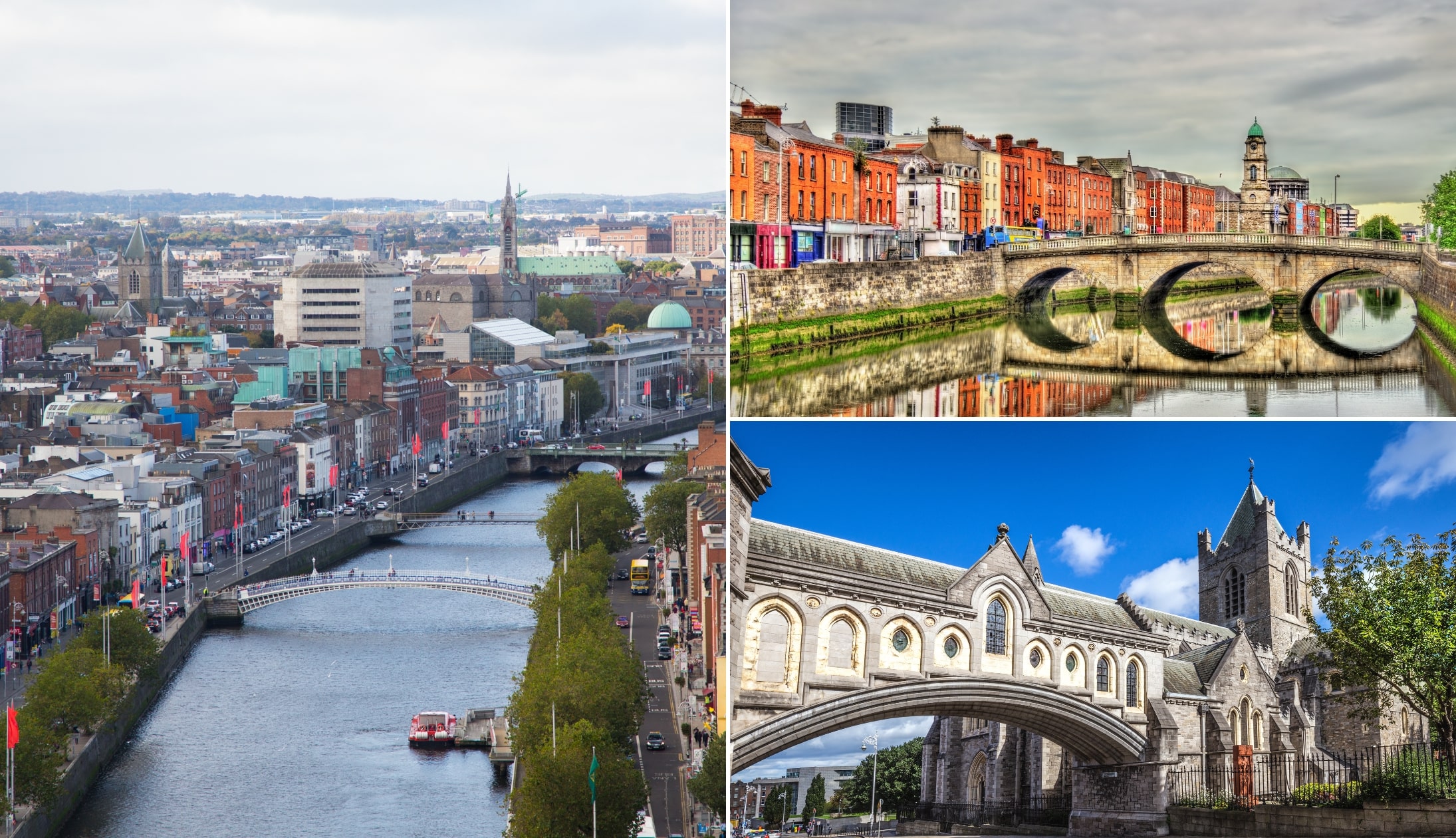 Many travel guides list Dublin as the best city in Ireland, and for good reason – the capital has an impressive literary heritage, history and hedonistic attitude.

Its lively past includes a Georgian heyday, leaving an elegant architectural legacy in the largest city in Ireland.

Regularly voted “Friendliest City in Europe” by TripAdvisor, Dublin excels at welcoming tourists with a genuine warmth and charm that makes everyone relax and smile.

Life after dark continues apace in the 1,000 pubs in this sociable city where dark pints of Guinness lubricate the wheels of impromptu music jams, friendly conversation and tall tales shared with complete strangers.

Related read: See our guide to the best things to do in Dublin 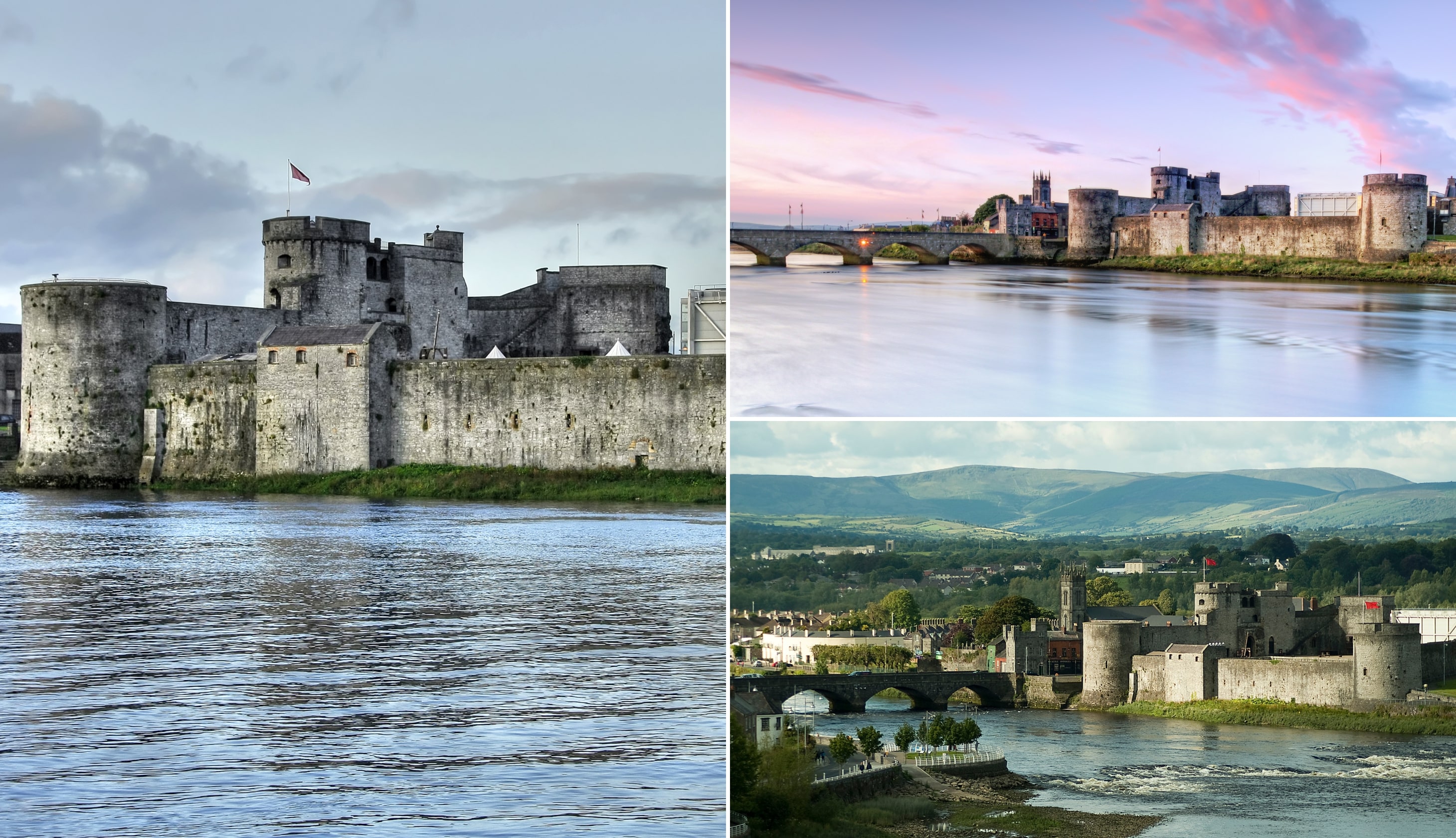 Limerick is one of the best cities to visit in Ireland for those arriving into nearby Shannon Airport.

This sizeable west coast Irish city is a nice mix of traditional and contemporary architecture. Straddling the River Shannon, this city of 205,444 was the first Irish European City of Culture and has an unmissable foodie scene.

Don’t miss the landmarks that tell the city’s story: St John’s Castle with its Viking origins, the Palladian Bishop’s Palace and the medley of museums covering art, history and the world’s first Flying Boat.

Related read: See our guide to the best things to do in Limerick

Another that’s widely regarded as the best city in Ireland is Belfast.

Capital of Northern Ireland and seat of the devolved government, this city of over 345,418 people has re-emerged from the Troubles to celebrate its many historic achievements.

As well as being the world’s largest linen producer, it was also home to Harland and Wolff, the world’s biggest shipyard. It built the ill-fated RMS Titanic, now remembered in the waterfront Titanic Museum and Memorial Garden.

The historic city is crammed with monuments, museums and landmarks, from the Victorian domed City Hall and fabulous Belfast Castle to the baronial Stormont Castle.

Related read: See our guide to the best things to do in Belfast 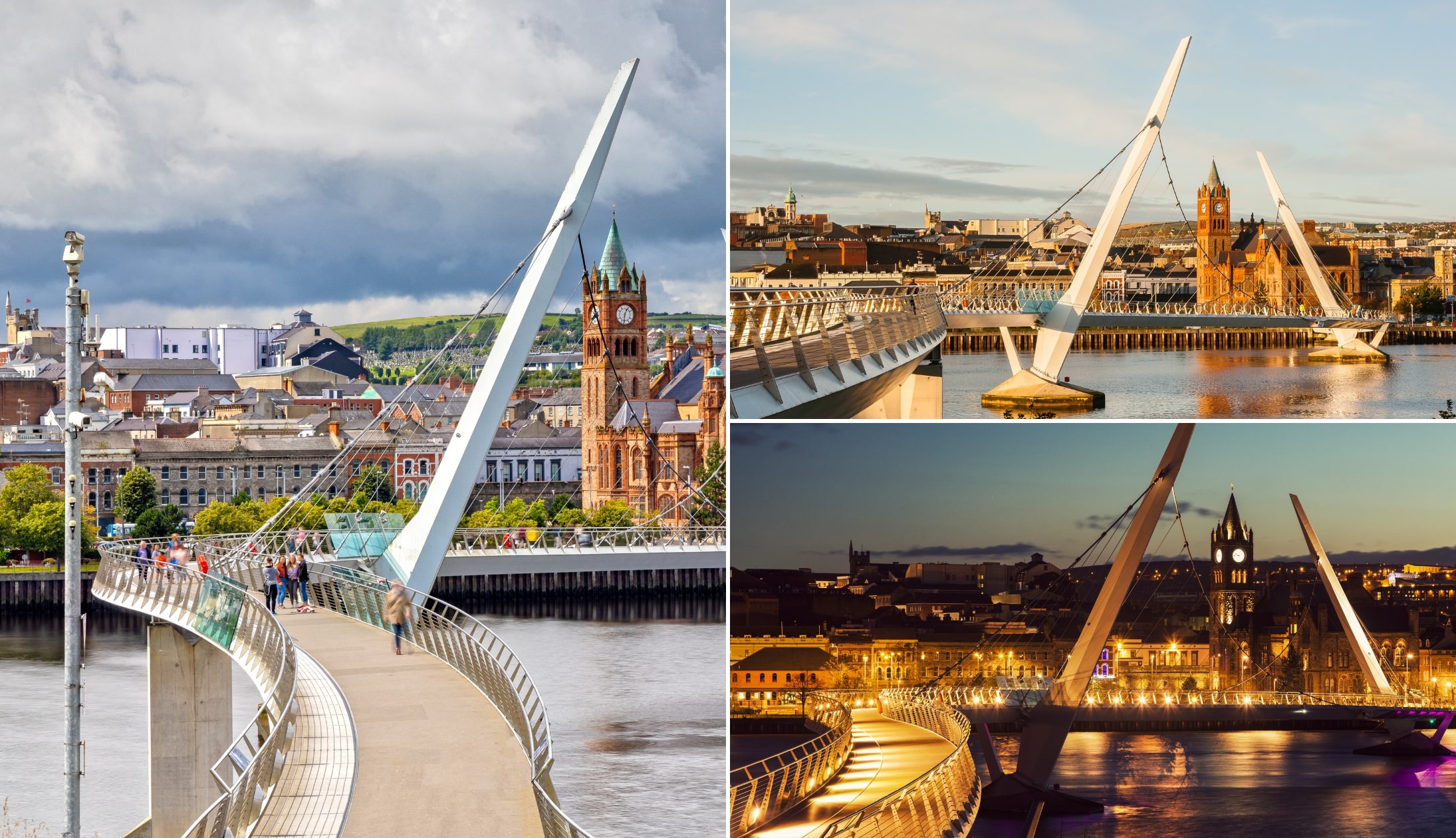 Derry is one of the more overlooked cities in Ireland, despite its many attractions and its proximity to the glorious Antrim Coast.

Following the construction of Peace Bridge and the waterfront development, this second largest city in Northern Ireland has emerged as a splendid metropolis of some 93,000 residents, wearing its tumultuous history with pride.

The 17th century city walls, Bogside murals and Hunger Strike Memorial all have their place in this city along with the emerging music scene, making this one of the most best cities to visit in Ireland in 2023.

Related read: See our guide to the best things to do in Northern Ireland 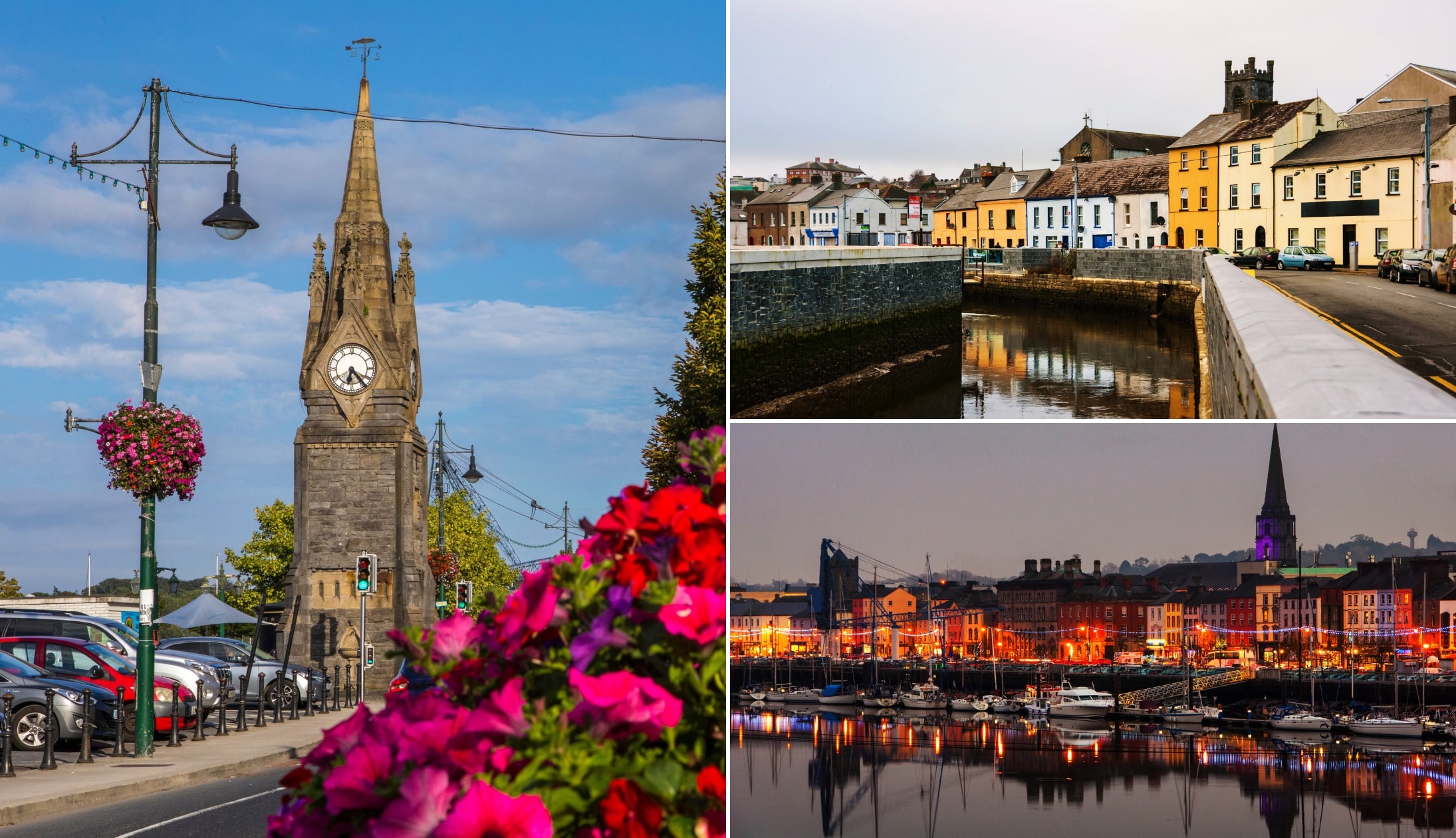 In my opinion, Waterford is the best city in Ireland if you’re planning looking to step off-the-beaten-path without having to travel to far.

It’s a stone’s throw from the magnificent Copper Coast – one of our favourite things to do in Ireland and a real hidden gem!

Waterford is one of the most famous cities in Ireland, exporting its quality Waterford Crystal all over the world. Also known as Port Lairge, it is the oldest city in Ireland, celebrating its 1100th anniversary back in 2014.

With a population of 127,085, the city has strong Viking roots. In fact the name comes form the Viking Veðrafjǫrðr, which means “windy fjord”.

Three museums make up the Viking Triangle within the quaint streets of the Old Town, making this one of the top Irish cities for history lovers. Don’t miss Reginald’s Tower and the seaworthy Viking Longboat on the Quay!

Related read: See our guide to the best things to do in Waterford 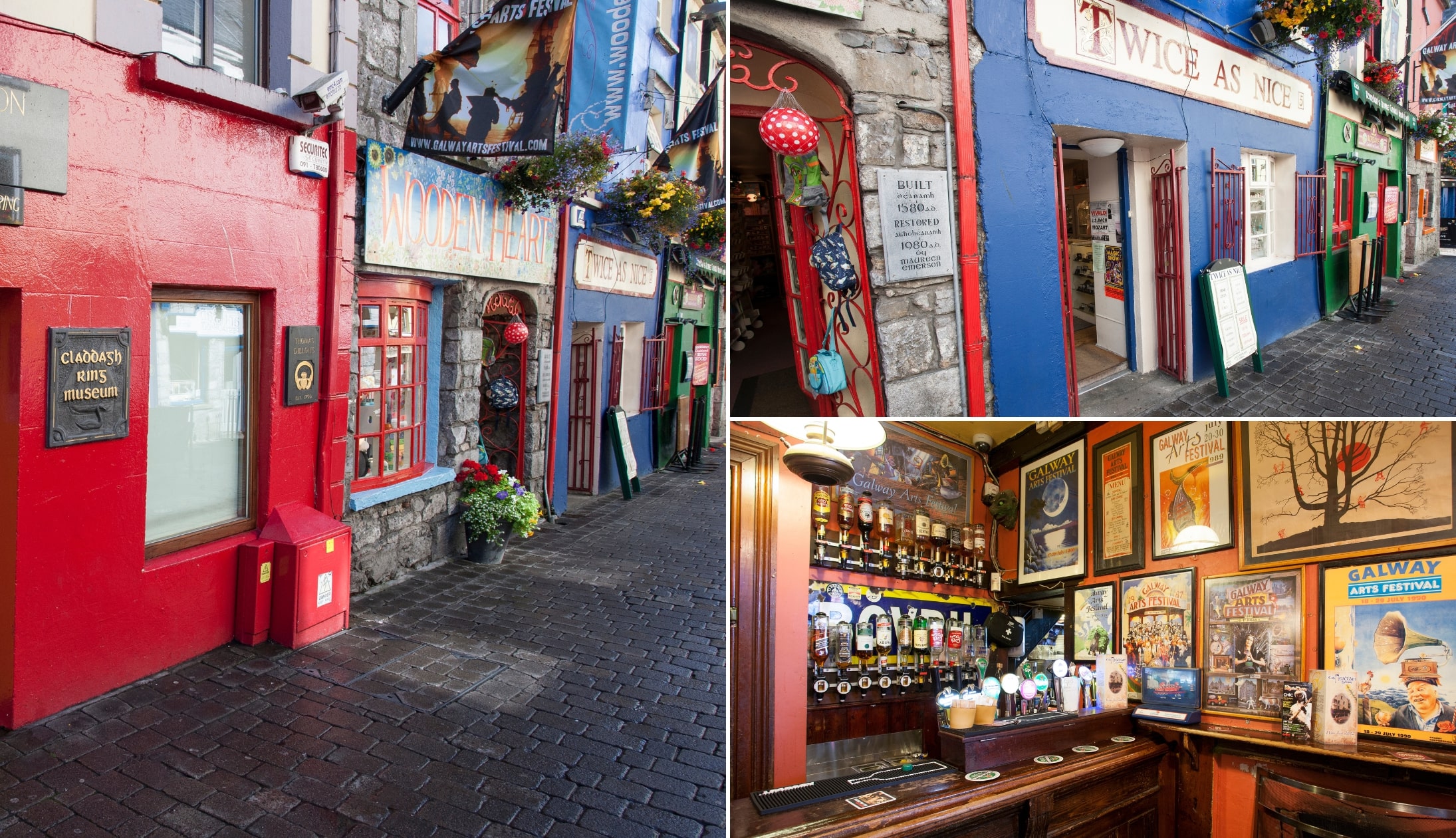 Galway is arguably the best city in Ireland if you’re looking for a a mix of city attractions and rural adventures (Connemara is on its doorstep).

Head west to Galway City, now a bohemian artsy community favouring brightly painted shopfronts. Discover this cultural oasis of more than 83,456 population in the sparely populated West of Ireland and prepare to be entranced.

This is the place to shop for authentic Claddagh rings, musical instruments and handcrafted pottery.

Related read: See our guide to the best things to do in Galway 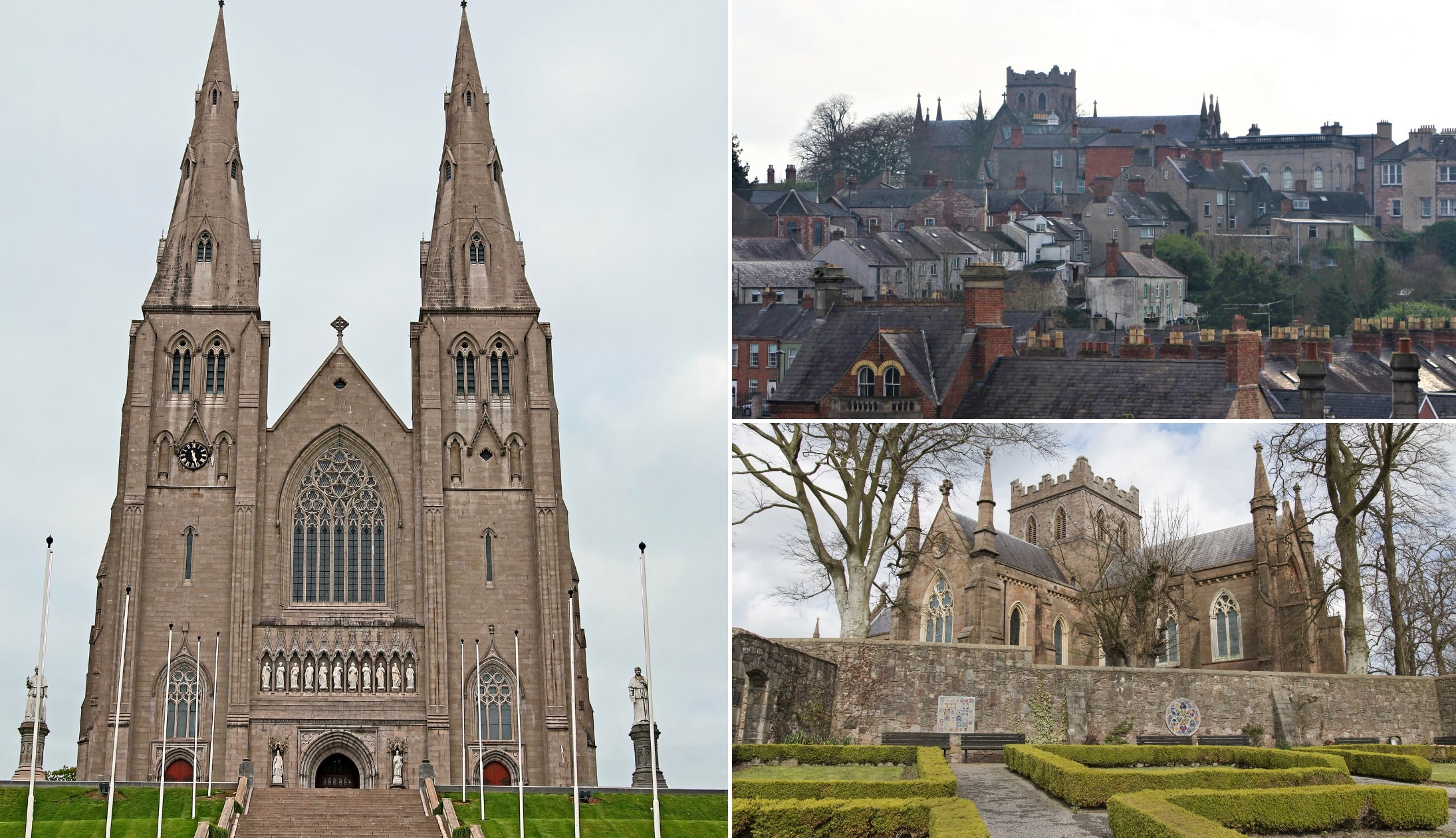 Armagh has been an important religious hub since the 5th century and only received city status in 2012 as part of the Queen’s Diamond Jubilee celebrations.

It remains the ecclesiastical capital of Ireland and Seat of the Primates of All Ireland with two cathedrals representing both Catholic and Protestant (Church of Ireland) faiths.

Interestingly, both are named after Saint Patrick! Highlights include the Armagh Planetarium and Observatory in its elegant Georgian building and the Armagh County Museum, the oldest county museum in Ireland.

Related read: See our guide to the best things to do in Armagh 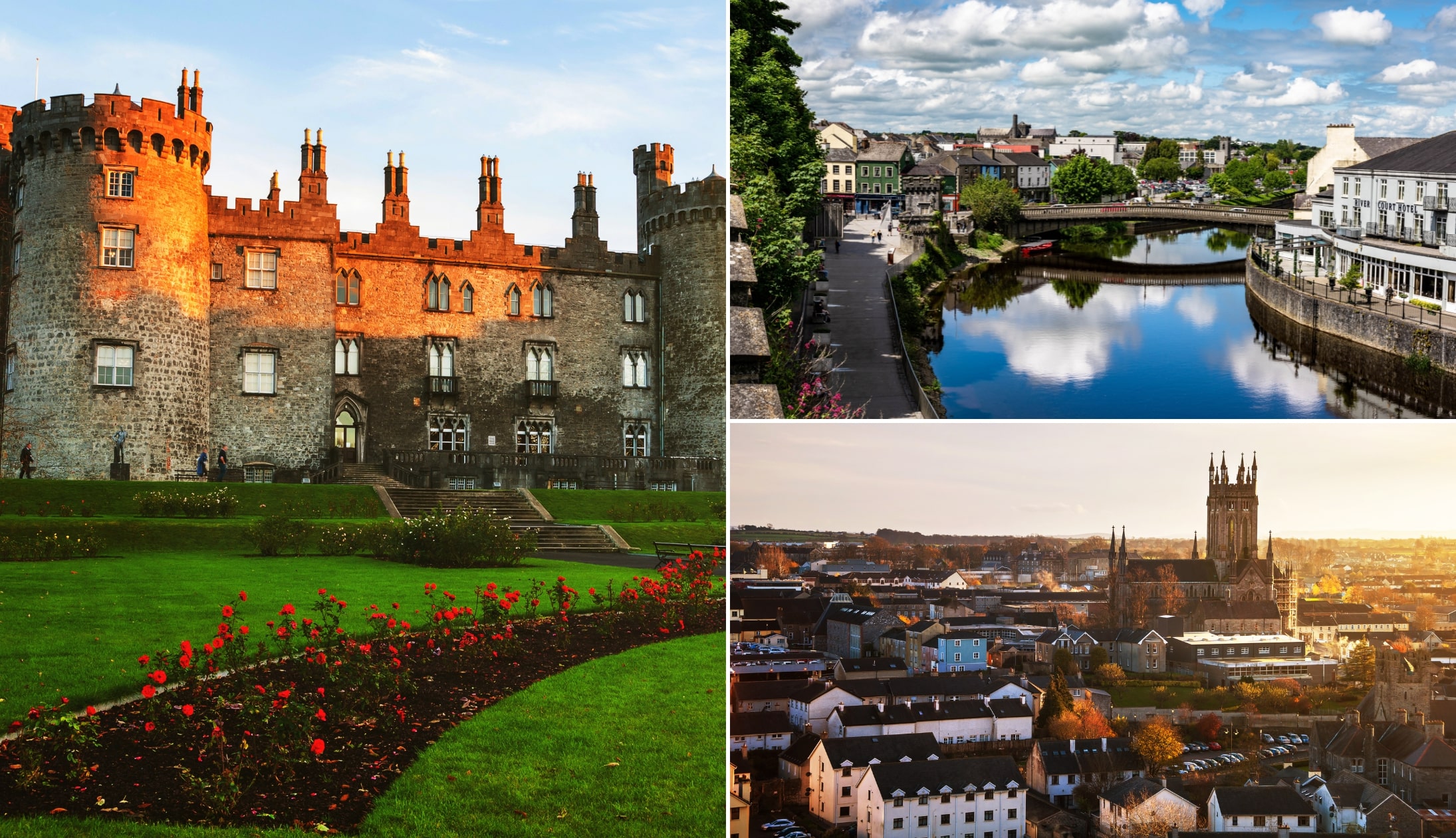 Last but not least, Kilkenny City is the epitome of Irish cities with its “Medieval Mile” of narrow lanes lined with historic buildings stretching from the imposing Kilkenny Castle to the 13th century St Candice Cathedral.

Stroll the banks of the River Nore and take time to appreciate the creativity on offer in this hub of Celtic arts and crafts. Fine restaurants rub shoulders with humble waterfront cafes and historic taverns.

This city of over 26,512 (2016) people manages to make an unforgettable impact on everyone that visits this former Norman stronghold in southeast Ireland.

Related read: See our guide to the best things to do in Kilkenny

FAQs about the best cities to visit in Ireland

We’ve had a lot of questions over the years asking about everything from ‘What’s the best city in Ireland for a weekend break?’ to ‘Which make a good base to explore from?’.

What are the different cities in Ireland?

There are 6 cities in Ireland (Kilkenny, Galway, Waterford, Limerick, Cork and Dublin) and there are 5 cities in Northern Ireland (Armagh, Belfast, Derry, Lisburn and Newry).

What is the best city in Ireland for a weekend?

This depends entirely on what you want to do. Personally, I think Dublin boasts the most to do in the city itself. However, Galway, Cork and Belfast are all close to endless adventure opportunities.