You can find some delicious Korean food in Dublin, once you know where to look!

If you’ve ever been to South Korea, you’ll how big of a role food plays in its culture.

And thankfully here in Dublin, there are a ton of places where you can explore all of the tantalising tastes of Korean cuisine!

Below, you’ll find the best Korean restaurants in Dublin, from Arisu and Kimchi Hophouse to Chimac and more. Dive on in!

What we think are the best Korean restaurants in Dublin 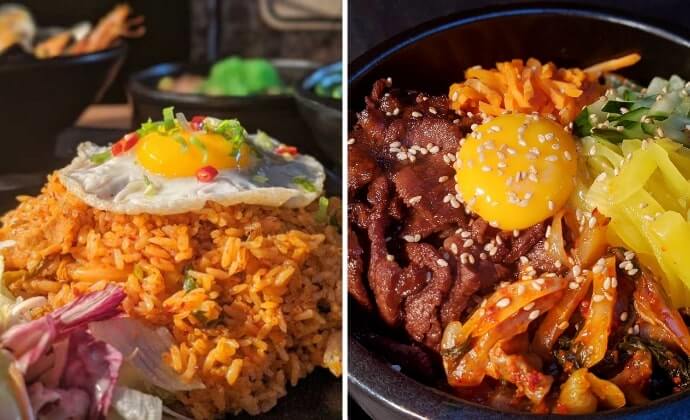 The first section of our guide is packed with places that we think dish up the best Korean food in Dublin. These are places that one or more of The Irish Road Trip Team have eaten in.

Below, you’ll find a mix of fancy Dublin restaurants and casual cafes where you can kick-back with a tasty feed. 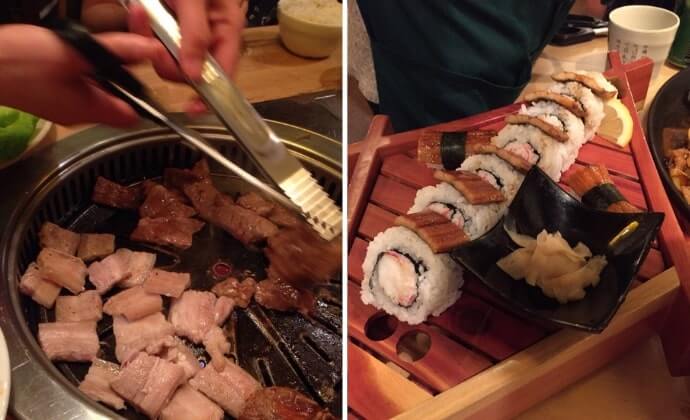 Photos via Arisu Restaurant on FB

If you didn’t know already, Koreans love their BBQ and one of the finest examples of an authentic Korean BBQ menu can be found at Arisu on Capel Street.

Founded in 2010, it was also the first Korean BBQ restaurant in Dublin, which they’re understandably very proud of (Update: it was the first in Ireland, too!).

Inside, Arisu’s decor is largely wood-finished minimalism that’s cosy enough but allows you to keep your focus on the food.

Order one of their tenderly-BBQ’d meats and throw in some noodles alongside and you’ll be grand. If you’re in the mood for something a little different, they also serve some cracking sushi here too. 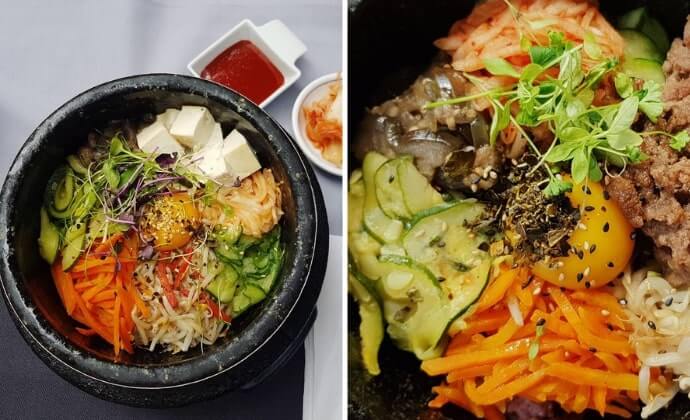 Photos via Kimchi Hophouse on FB

Another cornerstone of Dublin’s Korean food scene, Kimchi Hophouse on Parnell Street claims to be the oldest Korean restaurant in Dublin and their brand of Korean fusion has certainly been keeping the punters happy for many years.

If you do make your way here, then definitely check out their famous Bibimbap – a choice of marinated beef, fish, or tofu alongside an assortment of pickled vegetables topped with an egg and served over purple rice in a piping-hot stone “dolsot” bowl.

So if that doesn’t get your taste buds tingling then I don’t know what will! This is one of the most popular spots to grab Korean food in Dublin for good reason! 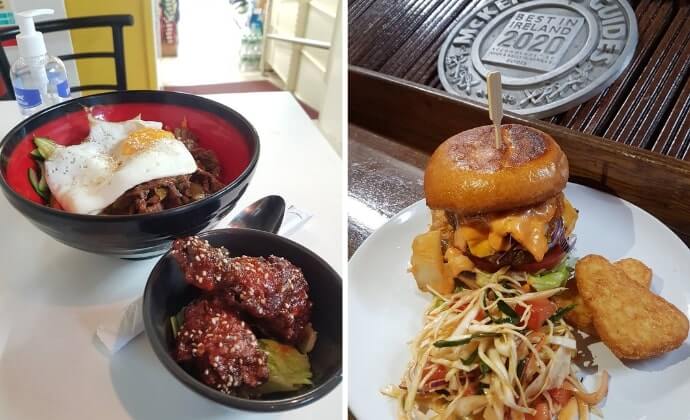 Photos via Brothers Dosirak on FB

A Dosirak is essentially a packed meal in Korea that comes served with several distinct elements, all of them rich and tasty. Got your attention yet?

If you want to find out more, then definitely head down to the back of the Super Asia Foods mini-market on Capel Street and find the Brothers Dosirak!

The ‘brothers’ who run the joint aren’t really brothers but they have been serving up some awesome Korean food since they opened in 2017. Order the bibimbap or the beef bulgogi and you’ll definitely walk away satisfied from this hidden little joint. 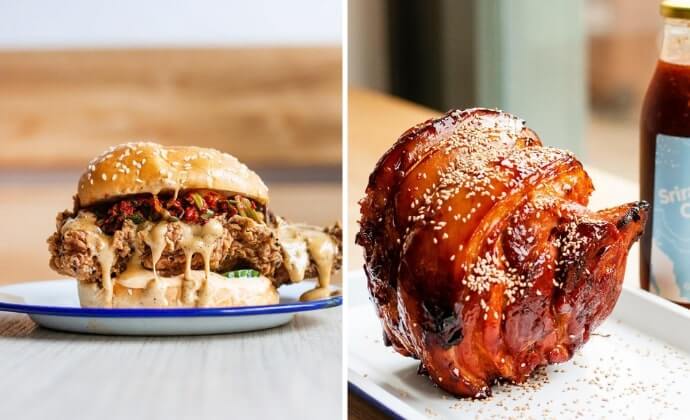 Photos via Chimac on FB

The concept behind Chimac is pretty simple and easy to like – chicken and beer! “Maekju” means beer in Korean so paired with ‘chi’ for chicken, it becomes (in a roundabout sort of way) Chimac. Anyway, catchy portmanteaus aside, this is a joint that celebrates Koreans love for this classic combination.

Throw in a side of hand-cut fries and a cold can of craft beer and you’ll be golden. If you’re looking for Korean restaurants in Dublin to visit with a group of friends, this is a great shout.

Related read: Check out our guide to the best places to try karaoke in Dublin (from dedicated karaoke bars to popular karaoke events)

Other popular spots for Korean food in Dublin

Now that we have our favourite Korean restaurants in Dublin out of the way, it’s time to see what else the capital has to offer.

Starting life as a small eatery hidden away behind a supermarket and known only to a few of Dublin’s food insiders, it’s now blossomed into a legit joint of its own and serves up every Korean favourite imaginable.

Offering everything from bento boxes to Korean street food such as japchae and pan-fried kimchi pork dumplings. And if you want something to pair perfectly with a beer, order the fresh kimchi fried noodles with pork. 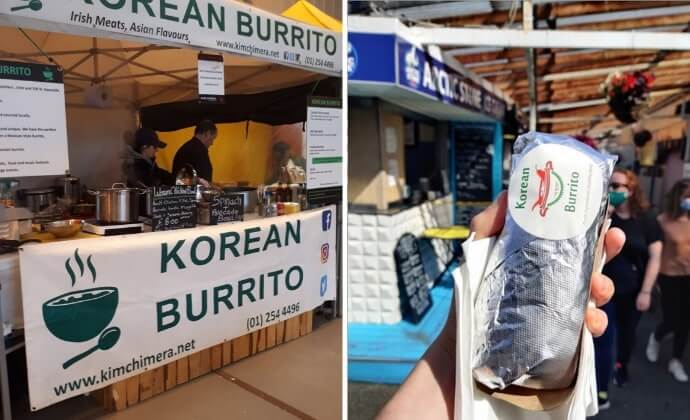 Korean food paired together with Mexican food doesn’t sound like a bad idea to me. And if you want to get specific, it’s ‘Korean style BBQ meats with Mexican fillings’ according to Korean Burrito themselves.

Find out how this frankly perfect-sounding pairing actually works by seeking them out down at Blackrock Market.

At €8.00 a pop, their generously-filled burritos are great value too and come with a mix of fillings, such as chicken dak galbi, avocado & spinach and the classic beef bulgogi. They also do bowls too if you want a slightly less calorie-heavy version. 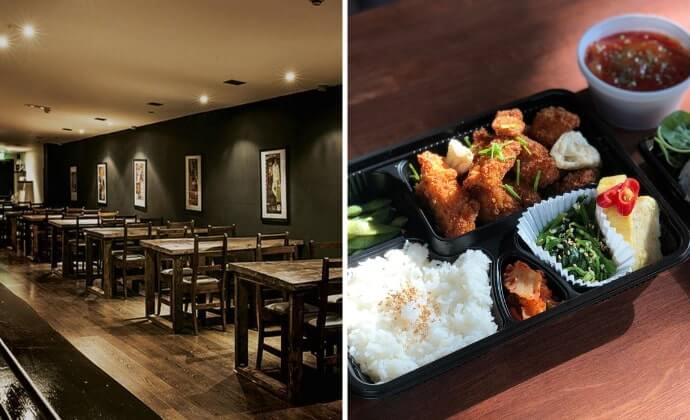 Photos via Drunken Fish on FB

Situated within the old-meets-new architectural potpourri of Mayor Street, Drunken Fish offers a wealth of options pouring from its large menu and is easily recognisible from the street thanks to its double-floored glass exterior.

Tapas, dosirak, jjigae, bimimbap, fried chicken, BBQ – basically no matter what the Korean cuisine, this spot has you covered! And one thing they also offer (that perhaps others don’t) is a full range of unique Korean cocktails.

Based on Soju (Korea’s most popular spirit), they’re classic cocktails with a distinctly Korean twist. If you’re looking for Korean restaurants in Dublin for afterwork food and drinks, get yourself here.

Korean restaurant Dublin: Where have we missed?

I’ve no doubt that we’ve unintentionally left out some brilliant places to try Korean food in Dublin from the guide above.

FAQs about the best Korean food in Dublin

We’ve had a lot of questions over the years asking about everything from ‘What is the fanciest Korean restaurant Dublin has to offer?’ to ‘Which does the cheapest food?’

What is the best Korean restaurant Dublin has to offer?

In our opinion, the best spots for Korean food in Dublin are Chimac, Brothers Dosirak, Kimchi Hophouse and Arisu.

Where can you get tasty, authentic Korean food in Dublin?

So, most of the places above do good, authentic food, however, in our opinion, Kimchi Hophouse knock it out of the park.