Day 4 is a BELTER. Get a decent feed in Dungarvan and prepare yourself for one of my favourite legs of this trip.

1. Colourful houses, a grand aul Cathedral and a prison in Cobh 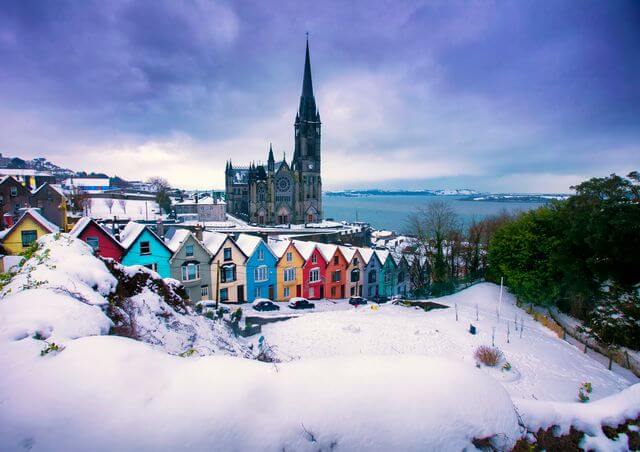 Photo by Brian Morrison via Failte Ireland and Tourism Ireland

Our first stop of the day is Cobh – it’s a 1-hour spin from Dungarvan and it’s home to plenty more than the colourful houses above.

Cobh is a gorgeous little town, with plenty of stuff to see and do, so we’re going to spend a good chunk of time exploring it! When you arrive, head for St. Coleman’s Cathedral’s and get to the car park.

If you want to see St. Coleman’s Cathedral and the colourful houses from the view above, you’ll need to head for ‘Spy Hill’. Pop it into Google maps and you’ll find it handy enough.

From here, it can be a little tricky based on your height, as you’ll need to peer over/climb up onto a wall which obstructs the view. If you climb it, be careful! The view above is what awaits!

For those of you that are fond of architecture, nip back up to the cathedral and take a look inside.

Named after the patron saint of the diocese, St. Colman Mac Leinin, the structure was inspired by the great cathedrals of medieval France.

Admire it from the outside as it towers over you and then take a ramble inside and enjoy the magnificent design of its interior. 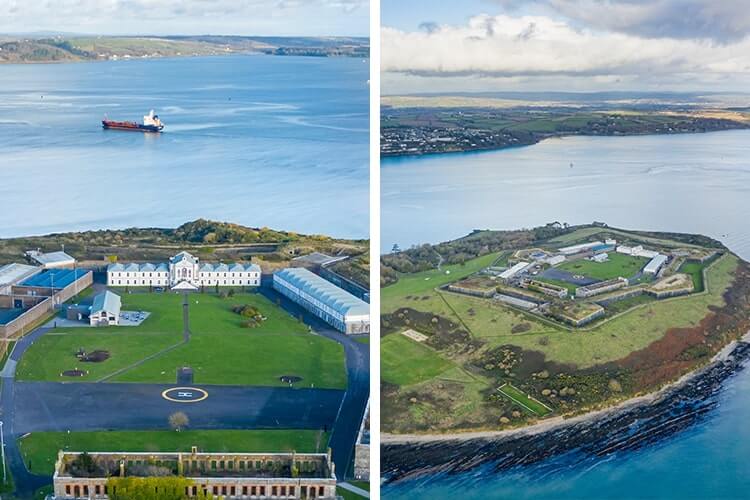 Our third and final stop in Cobh is Spike Island. Often referred to as ‘Ireland’s Alcatraz’ online, Spike Island was named Europe’s leading tourist attraction at the World Travel Awards 2017.

You’ll need to grab a ferry from Cobh which takes between 10 and 20 minutes to reach the island.

In the last 1300 years, Spike Island has hosted a 6th century Monastery, a 24 acre Fortress, the largest convict depot in the world in Victorian times and centuries of island homes.

Today the island is dominated by Fort Mitchel, a fortress that became a prison holding over 2,300 prisoners.

3. Kinsale for a ramble and a bite to eat 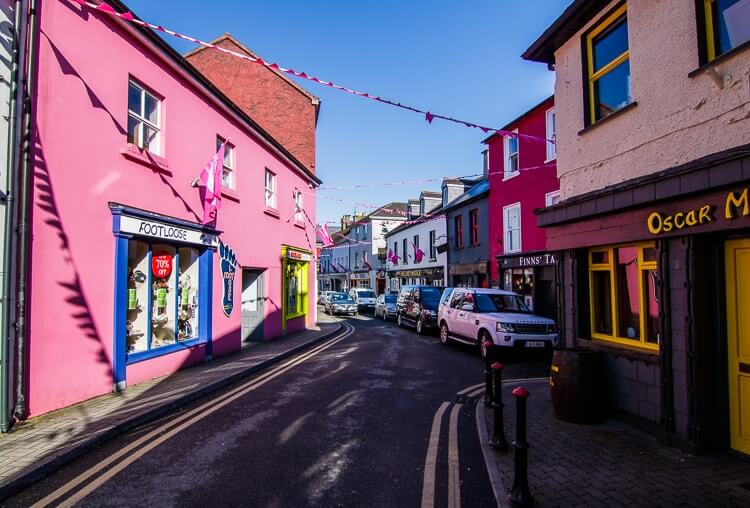 I’ve been here a handful of times before, but I keep coming back as it’s always a lovely little town to have a ramble around and grab a bite to eat.

Take a bit of time to wander around the town and then head for food. Drop into the Lemon Leaf Cafe for food and grab a cup of coffee to-go.

4. A stroll around the Old Head of Kinsale 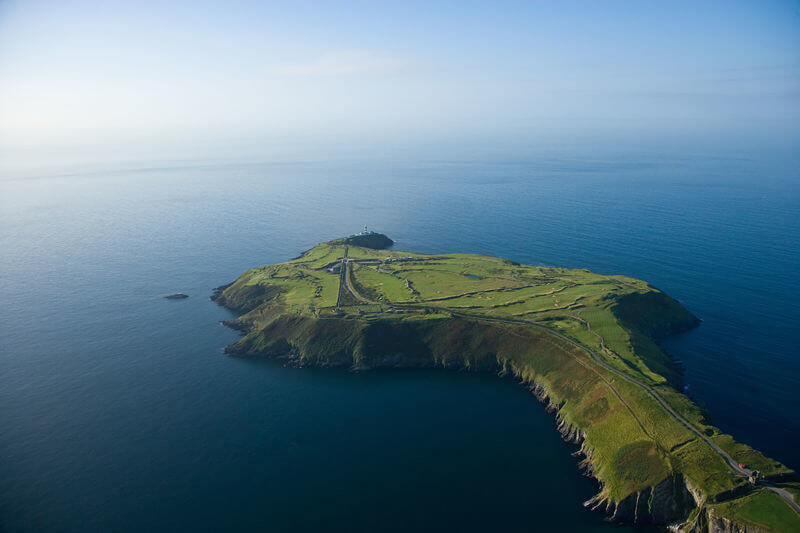 This walk is a handy 6 km (roughly 1.5 hours) loop walk that takes in remarkable views at every turn.

The Old Head of Kinsale is a magnificent narrow promontory into the Atlantic Ocean which rises hundreds of feet from the sea with craggy cliffs. Take your time and enjoy the gush of Atlantic wind that’ll clatter you from every angle.

5. A ramble along the sand to round off the day 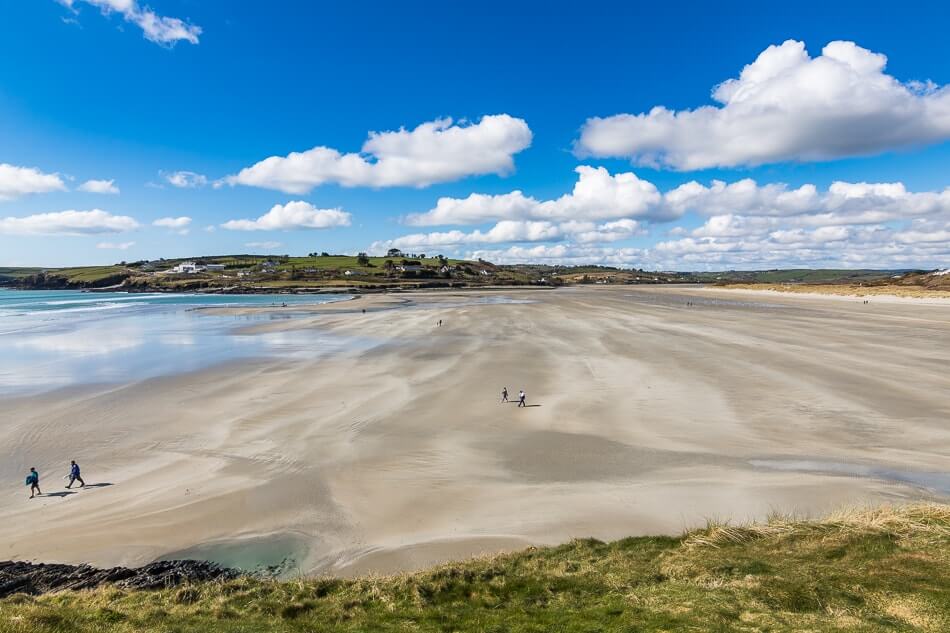 The promise of a stroll on a beach like Inchydoney to round off a day of exploring is enough to help you power through the last of the journey from Kinsale.

Now, I’ve parked in the hotel car park beside the beach before as I wanted to use the bathroom, but there are signs up specifically stating that the car park is for customers use only.

Use it at your own risk or grab a coffee or a bite to eat in the hotel first.

I really do love this place. It’s amazing at sunset if you just fancy getting a bit of pre-bed sea air (the view from the grassy verge near the car park is great) and it’s even better if you want to go for a stroll.

Well worth dropping by.

6. Clonakilty for the night 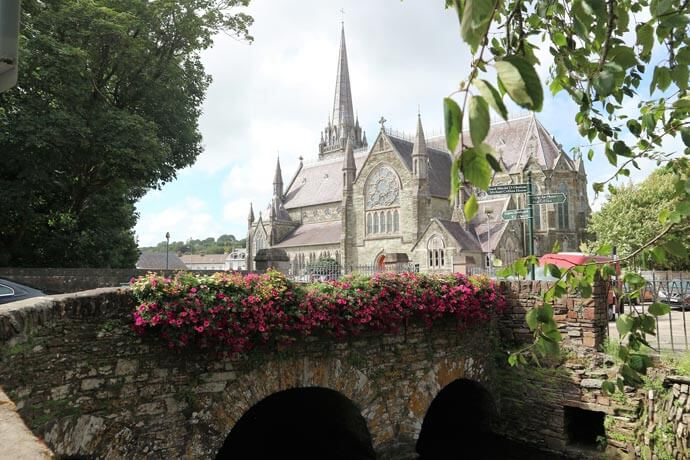 Inchydoney Beach to Clonakilty – 8-minute drive (arrive to Clonakilty for around 18:30) I’ve stayed in O’Donovan’s Hotel in Clonakilty previously, loved it and would 100% recommend it.

The hotel, décor and the place in general was pretty dated, but that, and the wonderful staff, gave the place a charm that I find rare to come by in hotels in Ireland.

It was also a couple of seconds from this pub…When I was here in the winter of 2017, the hotel bar was virtually empty. I moseyed on down, grabbed a table and ordered fish and chips and a pint of Guinness.

The evening consisted of myself, two local aul lads and the barman, all sat back, in comfortable silence, eating and watching a re-run of a David Attenborough documentary.