The Spinc in Glendalough is outstanding.

The Spinc is a ridge that overlooks Glendalough Valley and many of the more popular Glendalough hikes take you up to it.

The short Spinc Walk follows the blue arrows while the long Spinc Trail (the one we’re focusing on here) follows white arrows.

Below, you’ll find everything from where to park and what to expect to a map outline this route for exploring the Spinc in Glendalough.

Some quick need-to-knows about the Spinc in Glendalough 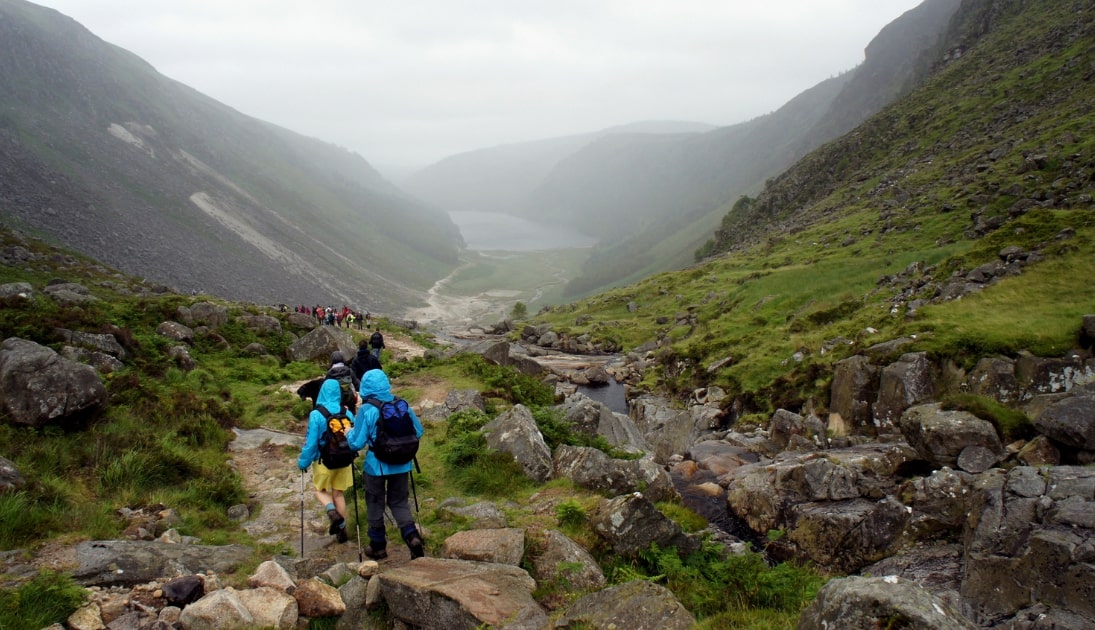 The Spinc Loop (aka the Glendalough White Route) is a superb walk that’ll test your mettle and reward you with incredible scenery at every turn. Here’s what you need to know:

You’ll find the Spinc in Glendalough, about an hour or so from Dublin City Centre, making it an ideal spot for a day out of town. It’s also nestled in the Wicklow Mountains National Park and guarantees superb scenery. The nearest village is Laragh and if you’re coming from Wicklow town, it’ll take about 30 minutes to drive.

You’ll find two car parks at Glendalough, the upper and lower. Both are large and the Upper car park also boasts two food trucks and a toilet. There’s a €4 fee for cars (all day) and €15 for motorhomes. For this walk, the Upper car park is closest to the trailhead, but if you don’t mind adding an extra 30 minutes or so, you can use the Lower car park and enjoy the Glendalough Monastic City along the way.

The Spinc Loop takes you on a 9.5 km ramble with some steep inclines and tricky paths. There’s some steep climbing and over 600 steps near the start, but after that, it’s a little more relaxed, though there are some tricky downhill sections later. It’s a moderate to strenuous walk, with a total ascent of 380 metres. Having said that, if you’re in reasonable shape, you should be okay and most people complete the walk in just over 3 hours. 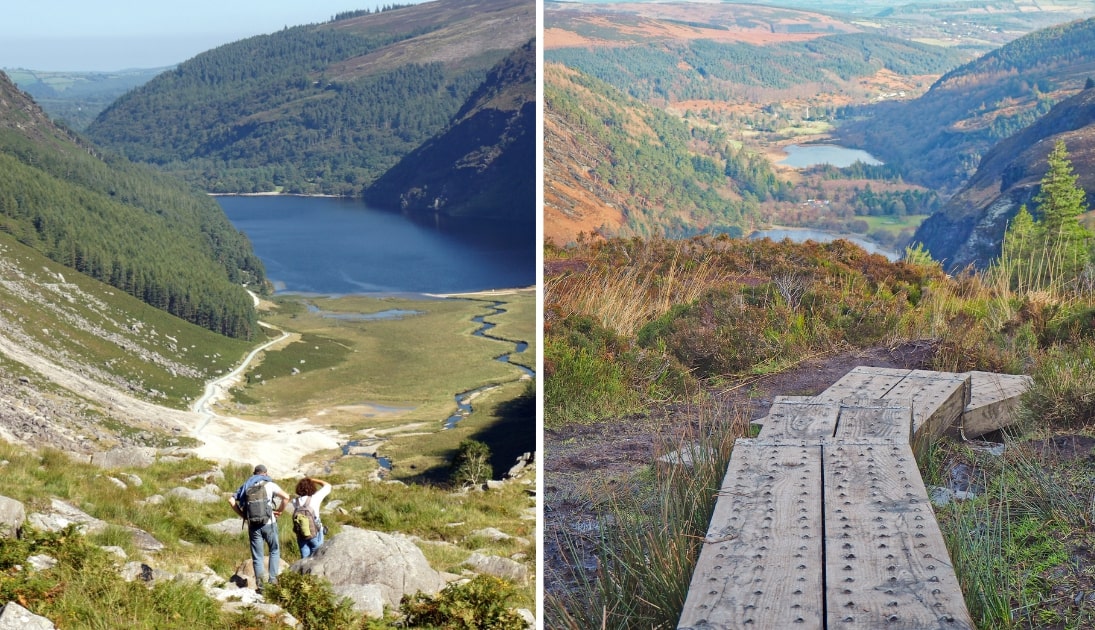 The Spinc Walk isn’t the longest of the many hikes in Glendalough, but it’s arguably the most well-known for its impressive views over the lake and surrounding valleys.

The Spinc is the name of the hill and it comes from Irish, An Spinc, which means pointed hill. This is a fair description and the pyramid-like hill requires some steep climbing to conquer.

A lot of the Glendalough White Route follows a wooden boardwalk along the top of the cliffs that line the southern shore of the Upper Lake before it drops down into a blanket bog.

Further on, you’ll descend into the Glenealo Valley, a serene and picturesque area home to deer and wild goats.

Once you make your way back into Glendalough Valley, you’ll arrive at the miners village, before following a flat path along the northern shore of the Upper Lake and back to the car park.

A tough but rewarding ramble, this is one of our favourite hikes in Wicklow for good reason.

An overview of the Glendalough White Route 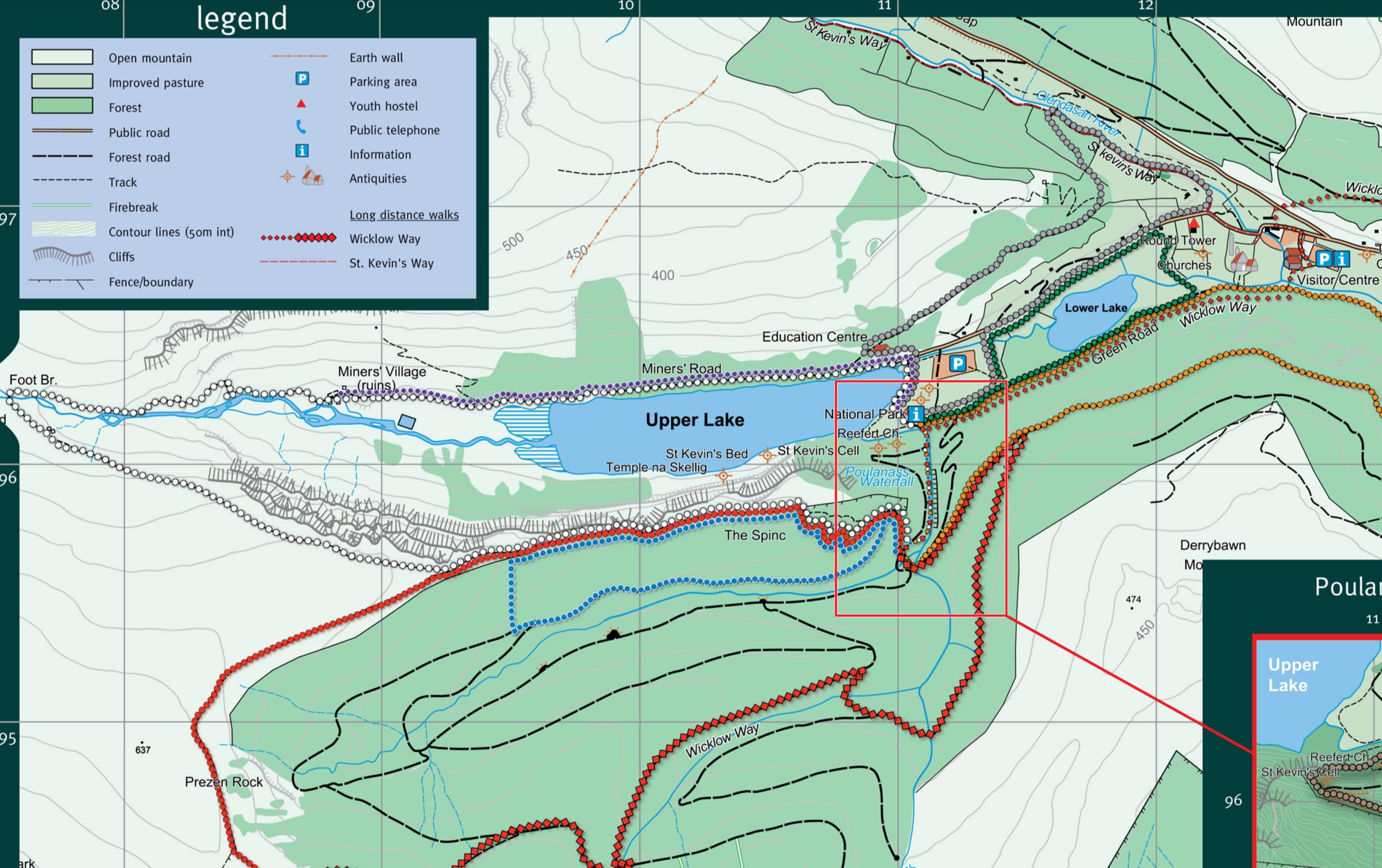 The Glendalough White Route officially starts at the Upper car park and from there it’s pretty easy to follow, just look for the white arrows.

If you prefer to start at the Lower car park and see the monastic site first, simply follow signs for the Green Road Walk leading you to the Upper Lake and car park.

Excellent signage makes it difficult to get lost, so we’ll just go over what to expect along the way. 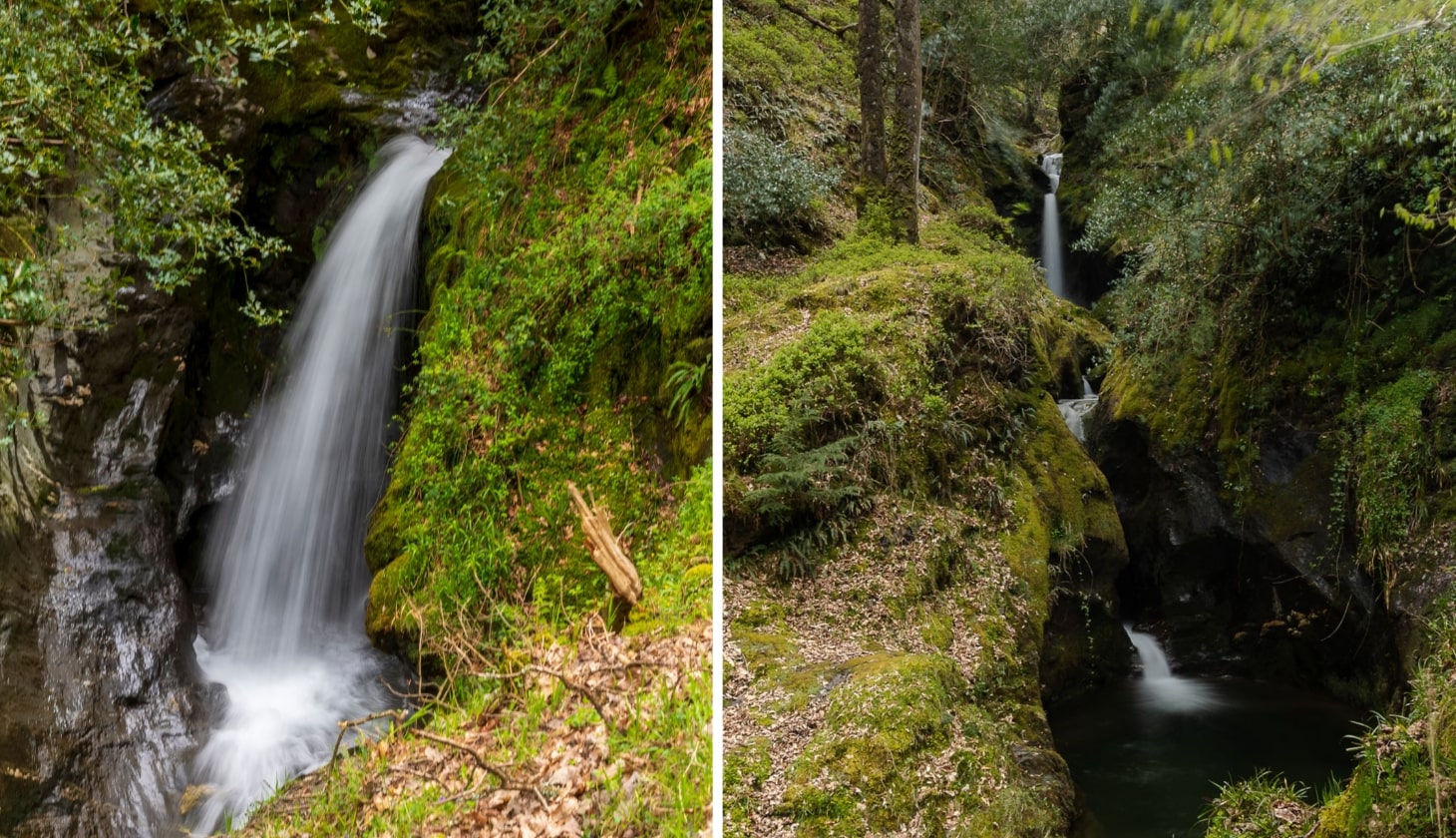 You start the Spinc Walk from the Upper car park, head to the Glendalough Visitor Centre to pick up a free printed map of the area and all of the routes. You can follow the loop in either direction.

Clockwise starts with more climbing and a lot of steps, while anti-clockwise will require more scrambling up rocky inclines, ending with a lot of steps back down.

The choice is yours, but in this guide, we’re doing the Spinc Walk clockwise as it gets you to the viewpoint quickest, and going down lots of steps does my knees in!

From the visitor centre, follow the white arrows and signs for Poulanass Waterfall. You’ll soon see the beautiful cascade as it crashes down through the surrounding oak forest.

Continue up the path until it splits, and take a right.

600 steps and a boardwalk over the Spinc 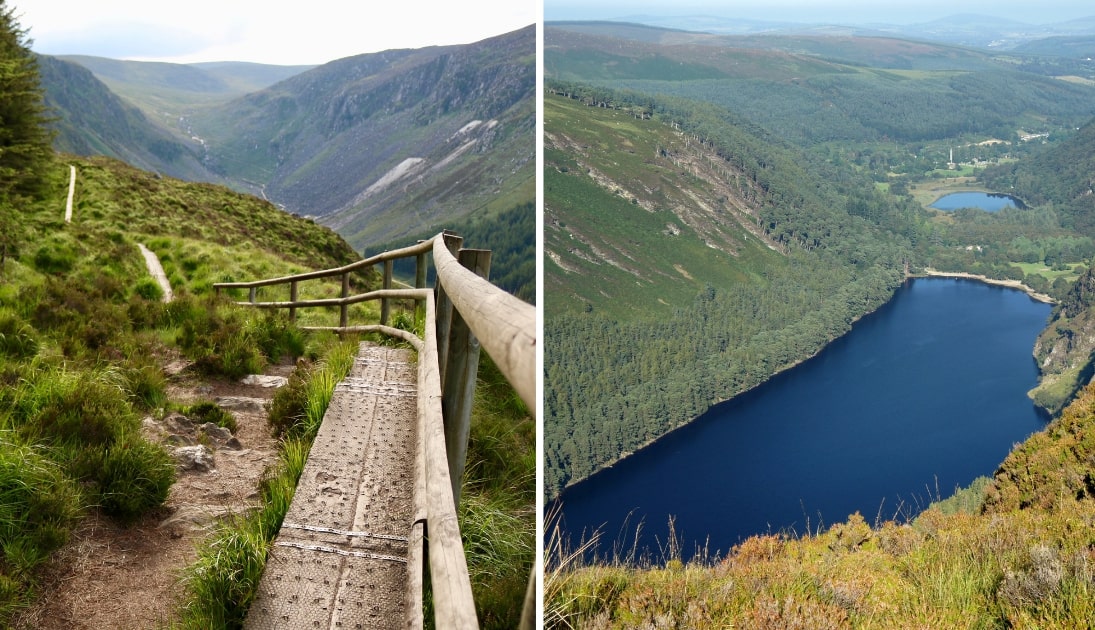 As you leave the main track and enter the enchanting spruce forest, you’ll soon come across the first steps of a little over 600. This can be a knee basher and a lung buster, but take your time and enjoy the scenery.

This is the toughest part of the Spinc trail and, once you reach the top, you’ll be well rewarded. As you emerge from the forest, the boardwalk levels out and the views open up to reveal the gorgeous hills and forests that surround you, as well as the lake glimmering below.

As you crest the top of the Spinc, enjoy walking through a landscape of lush ferns, Douglas Firs, and Lord of the Rings-esque slopes.

You’ll be able to see the valley in all its glory, complete with both lakes, a former mining area, and the moody mountains all around.

Down in the valley

After topping the ridge, the Spinc Walk gradually begins to descend away from the cliff edge and into Glenealo Valley. Keep your eyes peeled here, it’s not uncommon to see deer, wild goats, and even peregrine falcons.

As you go, the boardwalk disappears and turns into a rocky trail. Soon enough, you’ll cross a bridge over the Glenealo River.

Now, a warning – this is where the Spinc Walk can get dangerous if you’re visiting on a wet day – the rocks here can be very slippy, so please take care!

After the bridge, it gets pretty rocky, with a path that zig-zags down to the valley floor. Good boots are a must here as it can be a real ankle twister if you’ve not got support.

The Miners Village and home 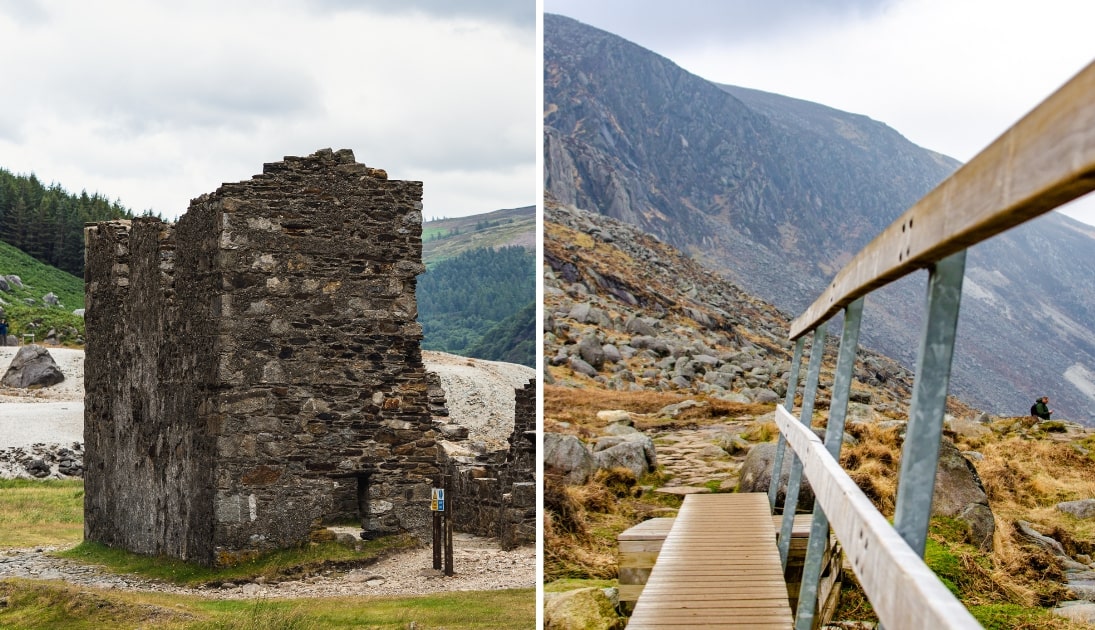 Once you reach the bottom you’re on the final leg of the Spinc walk, and it’s relatively easy-going from this point onwards.

You’ll find yourself surrounded by the ruins of old stone buildings and rusty machinery. Once you’ve finished exploring, you’ll follow a wide, flat path (the Miners Road Walk) along the northern shore of the Upper Lake, with a forest of Douglas Firs to your left.

Finally, you’ll arrive back at the Upper car park, ready for some well-earned refreshments!

Things to do after the Spinc trail

One of the beauties of the Spinc in Glendalough is that it’s a short spin away from many of the best things to do in Wicklow.

Below, you’ll find a handful of things to see and do a stone’s throw from the Spinc Trail (plus places to eat!). 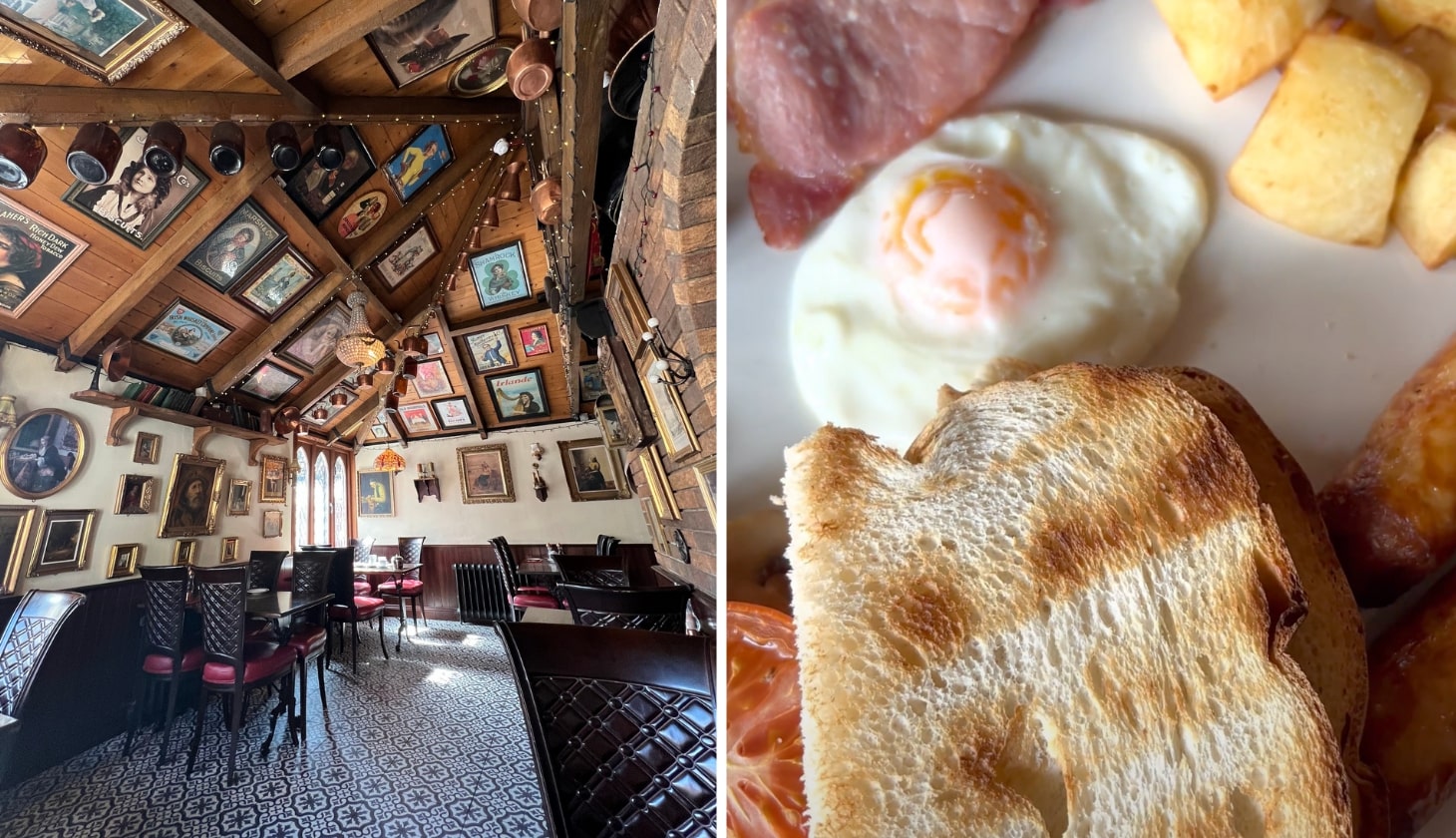 Conquering the Spinc in Glendalough will have you hankering for a feed. If you’re ready to leave the area, nip over to Laragh where you’ll find some great pubs, cafes, and restaurants. The Wicklow Heather Restaurant is a personal favourite, with sumptuous food, a fantastic patio area, and a charming, Harry Potter-esque interior. 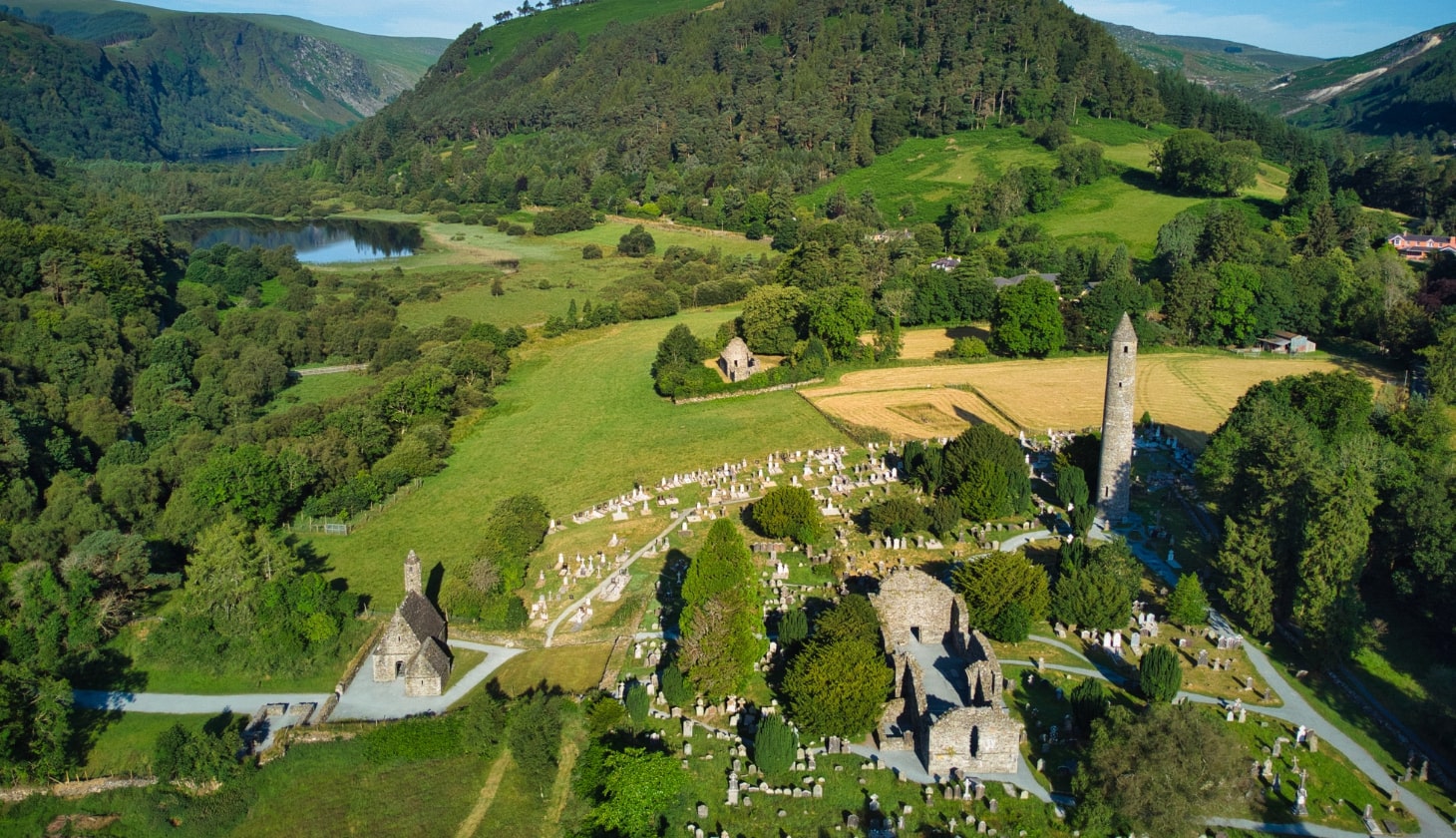 After finishing the Glendalough White Route, head on over to Glendalough Monastery. Dating back to the 600s when it was founded by St. Kevin, it boasts some ancient ruins and relics. There are seven churches to explore, as well as the iconic Glendalough Round Tower, believed to be more than 1,000 years old. 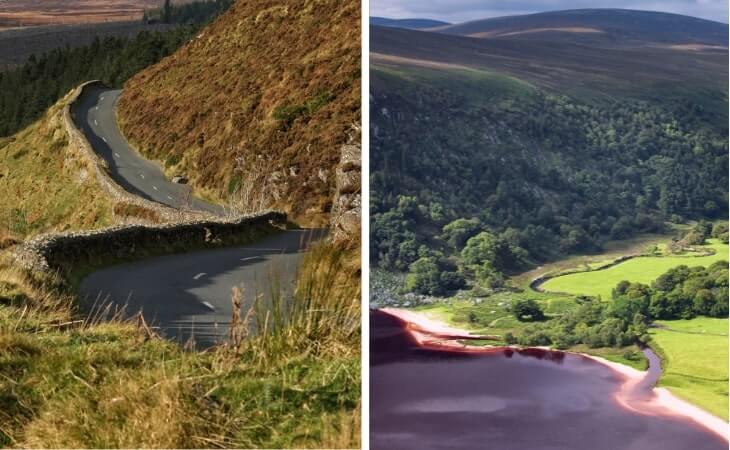 Looking for the scenic route home? The Sally Gap Drive takes you through some of the best scenery in the Wicklow Mountains. Following the Old Military Road from Laragh, you’ll drive up into the mountains until you reach Sally Gap Crossroads. From here, swing right down to Roundwood, past the mighty Lough Tay and its stunning surroundings.

FAQs about the Glendalough White Route

We’ve had a lot of questions over the years asking about everything from ‘Is the Spinc trail tough?’ to ‘What actually is the Spinc in Glendalough?’.

How long is the Spinc Walk in Glendalough?

If you take the longer 9.5 km loop around the Spinc in Glendalough it’ll take you around 3.5 hours, depending on pace and stops.

Where does the Spinc trail start?

Officially, the Spinc loop starts in the Upper car park and then follows the white arrows up towards Poulanass Waterfall before leading you up along boardwalk.

Is the Spinc Walk hard?

You’ll need a moderate level of fitness to tackle the Glendalough White Route, as there’s some tough incline on the Poulanass side before you reach the top.