We published a detailed guide to 88 of the best hikes and walks in Ireland last week.

While I was chipping away at it, I got lost in a wormhole of photos and videos taken from the summits of Ireland’s mightiest mountains and hills.

And some of the island’s most spectacular views require a bit of time to reach by foot, which is ideal for those of you fond of a ramble or a climb.

In the guide below, you’ll find a handful of hikes in Ireland with views that’ll knock you sideways. 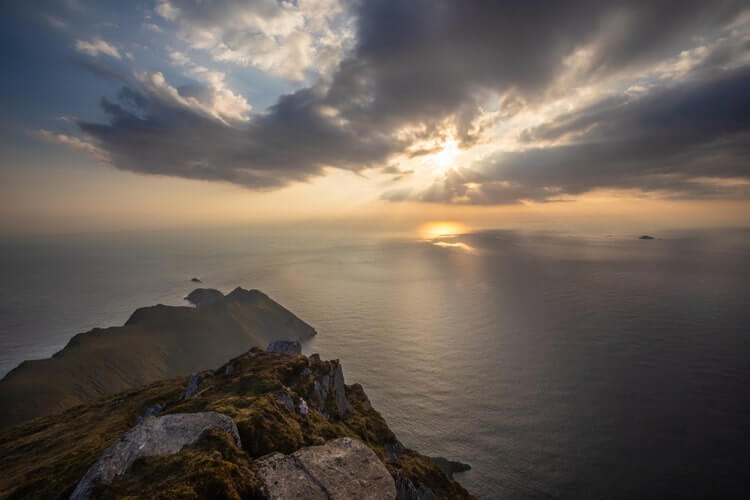 A lot of people mistake the Slieve League Cliffs in County Donegal as the highest sea cliffs in Europe. Although they’re pretty damn big, they’re not even the highest in Ireland.

The highest sea cliffs in Ireland can be found on Achill Island in County Mayo, on the side of Croaghan Mountain.

They stand at an impressive 688 metres (2,257 ft), which is nearly three times the height of the Cliffs of Moher.

The cliffs here can be reached after a 4 to 5 hour (depending on pace) climb. The view from the top on a clear day is special to say the least. 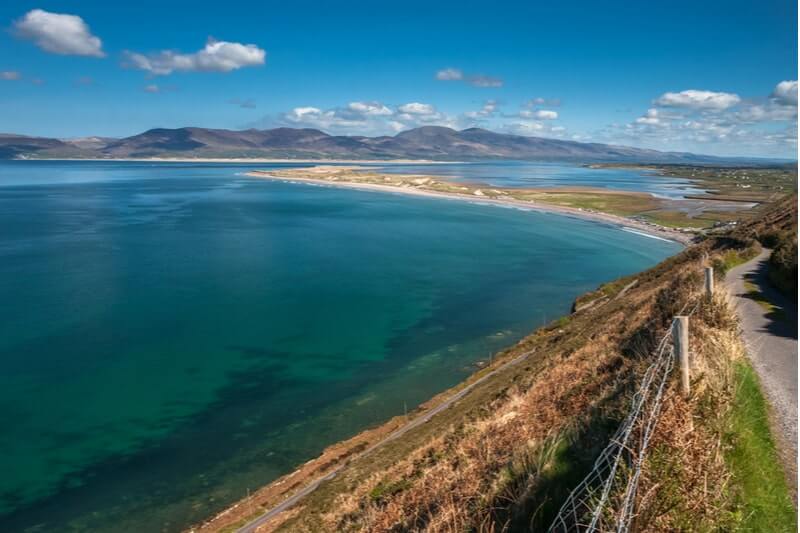 The Rossbeigh Hill Loop Walk has been one of my favourite things to do in Kerry since I was a kid, spending summer weekends in nearby Glenbeigh.

If you do this 3.5 to 4-hour walk on a clear day, the views that you’ll be treated to out over Rossbeigh Strand and the surrounding countryside are absolutely sensational.

If you visit, keep an eye out for Inch Beach and the Dingle Peninsula off in the distance.  It’s been a while since I did the Rossbeigh Hill Loop Walk, but I remember it being reasonably handy, aside from the length. 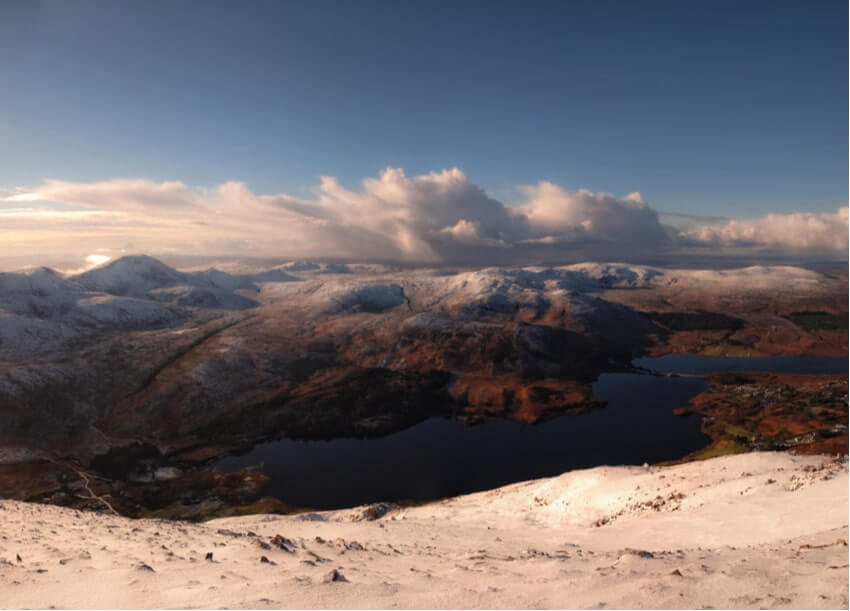 At 751 meters (2463 feet) high, Mount Errigal in County Donegal is the highest peak in the Derryveagh mountain range.

There are several different walks that you can head off on on Errigal – the one that I’ve done most frequently kicks off from ‘Errigal Mountain Hike Parking’ on Google Maps.

It crosses boggy ground at the beginning and is nice and steep in places. There are also two different peaks to reach!

The walk on Errigal takes between 2.5 and 3 hours and you can soak up unbeatable views of the Derryveagh Mountains and the rolling Donegal countryside from the top. 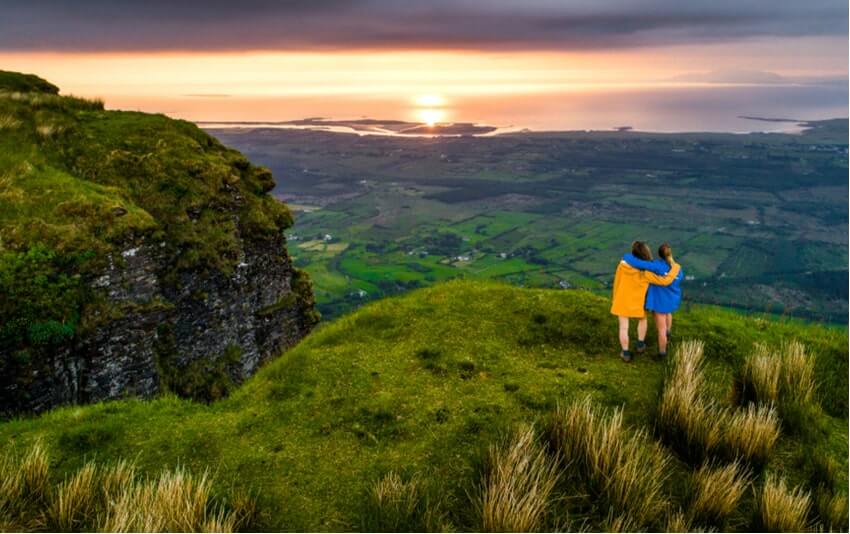 I’ve always thought that Benwiskin looks a little like a pointy wizards hat from the ground. It also looks a bit like a wave.

You’ll find it in Sligo, not far from the Gleniff Horseshoe. From the top, you’ll catch views of Slievemore, Benbulben, Streedagh Beach and the magnificent Mullaghmore.

I’ve heard mixed stories from people that have climbed Benwiskin over the years. I’ve had friends that encountered an aggressive farmer and I know of many others that did the walk without any issue.

If you fancy giving this one a crack, it’d be worth taking a guided hike with these lads. Keep in mind that some hikes and walks in Ireland can cross private land, so you need to be respectful. 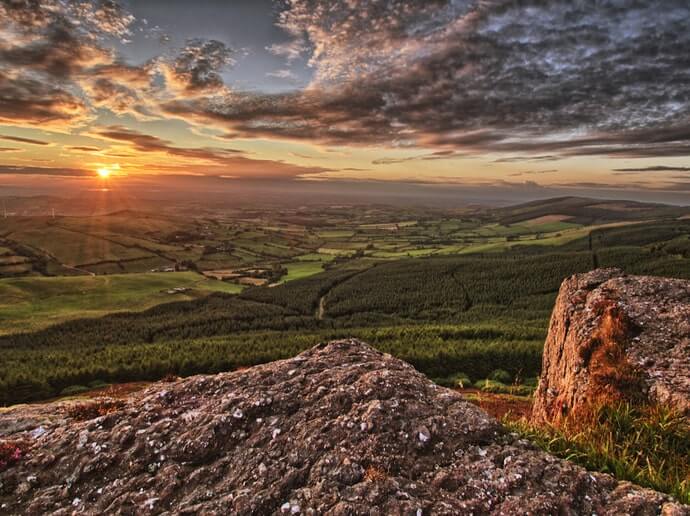 We’re off to Tipperary next to the Devil’s Bit – a mountain that climbs to 478m above sea level at its highest point.

According to legend, the devil took a bite out of this mountain and broke a tooth while doing so. You’ll often hear people say that the tooth now stands as the historic Rock of Cashel.

If you reach the summit of Devil’s Bit on a clear day, you’ll be treated to views of eight surrounding counties, and a clatter of patchwork-like green fields as far as the eye can see.

There’s a 5km loop walk here that’ll take you along forest and hillside paths. The loop itself won’t take you to the summit, so you’ll need to take a short detour to the top if you visit. 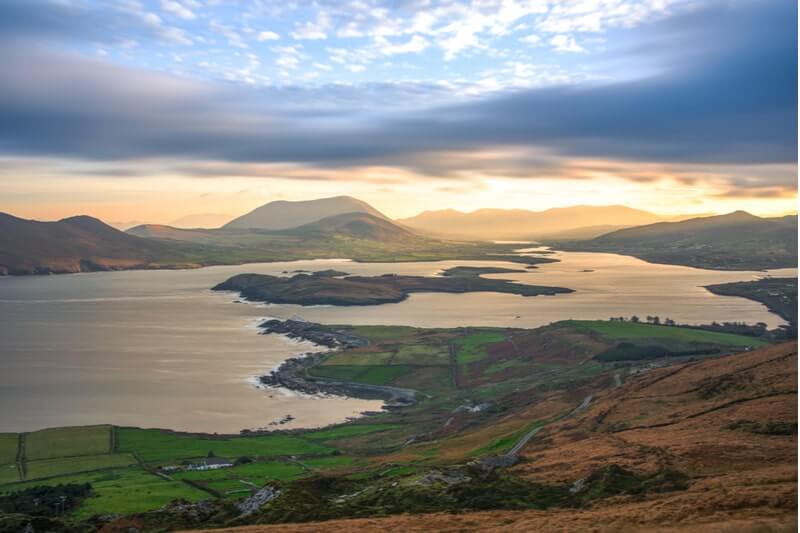 There are few places in Ireland that I return to as frequently as Valentia Island. If you’ve never been, try and angle a visit around sunrise or sunset.

You can drive, walk or cycle onto Valentia from a handy bridge at Portmagee. When you arrive, take a spin up to Geokaun mountain and Fogher Cliffs.

The view from here is beyond special. If you have a member of your party with low mobility, or if you just don’t fancy walking up, you can park literally feet from the view above.

There’s not much else to say about this place, aside from get yourself here sharpish – it’s as incredible as it looks above. 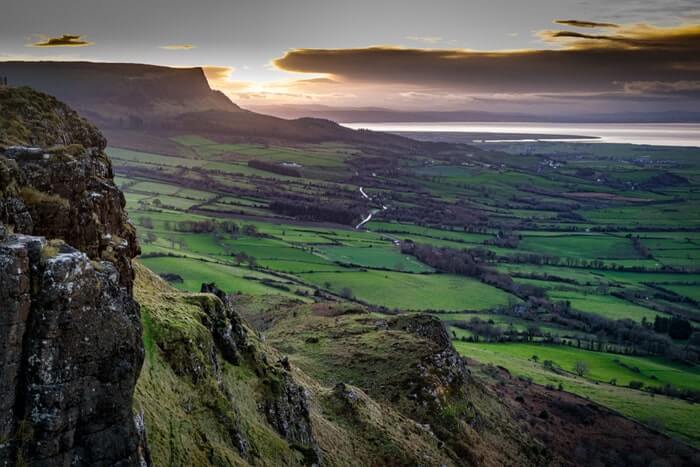 We’re off to County Derry next to Binevenagh, a mountain at the western end of the Antrim Plateau and the perfect spot for a ramble.

Those that reach the summit of Bunevenagh can soak up views that stretch for miles. On a clear day, you’ll see everywhere from the Antrim coast and Donegal to way out to Scotland.

On certain days, when the conditions are just right, you’ll also see people hand-gliding over the summit of Binevenagh. 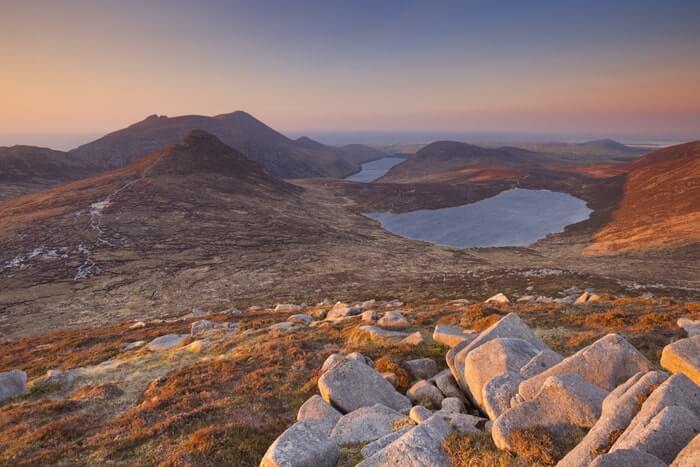 Our next hike will take you up to see Lough Shannagh, the largest non-man-made body of water in the mountains of Mourne.

This walk crosses the Mourne Wall and the Miner’s Hole River and overlooks the lough at many different points.

Like many of the walks in the Mournes, the chances of having the whole place to yourself, similar to the photo above, are quite high.

It’s places like this that make Ireland special. It’s not overly off the beaten path and the views are nothing short of sensational. 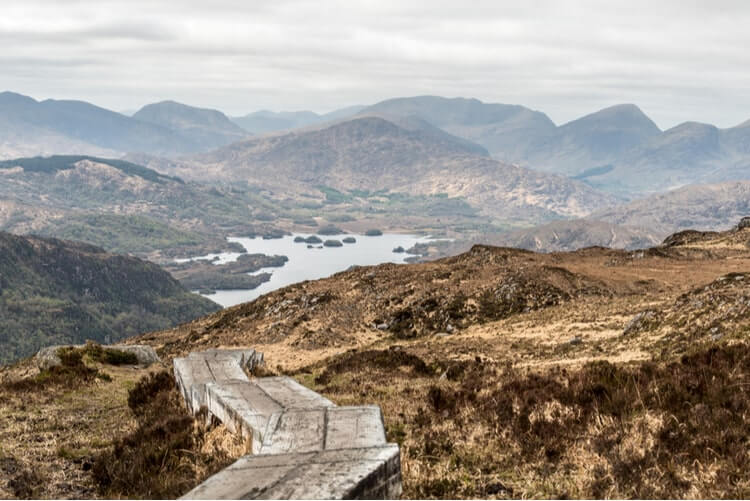 We’re off to Kerry next to Torc Mountain, a stone’s throw from the busy little town of Killarney.

There’s a lovely 7.5km walk on Torc that takes from 2 to 2.5 hours to complete, and that offers views of Killarney town, the National Park, Muckross House and the McGillicuddy’s.

You’ll also catch a glimpse of Torc Waterfall. There’s a clear path to follow on this ramble and a good chunk of it is covered by railway sleepers (the boardwalk in the photo above).

These tend to be pretty decent to walk along, but they can get slippery in places after rainfall, so have your wits about you. 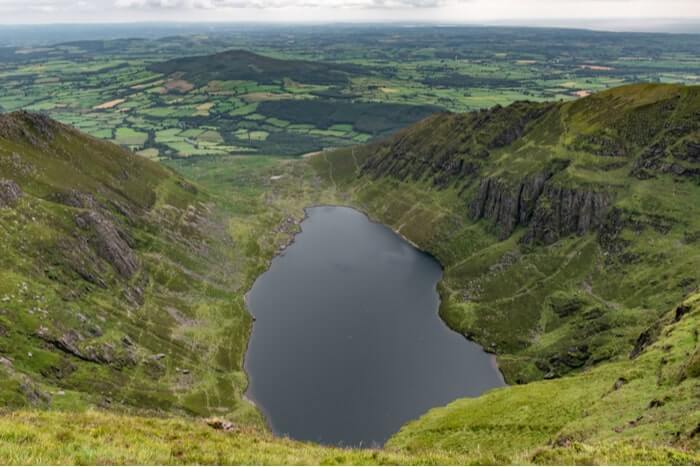 I feel like I’m forever banging on about the Coumshingaun Lake Walk, but the view here really is spectacular.

The walk at Coumshingaun can take between 4.5 to 5 hours and it’s relatively strenuous, but it’s well worth the effort.

Those that conquer this walk on a clear day will be treated to one of the best views in the Waterford. Imagine flaking out for a bit with the view above in front of you – magic! 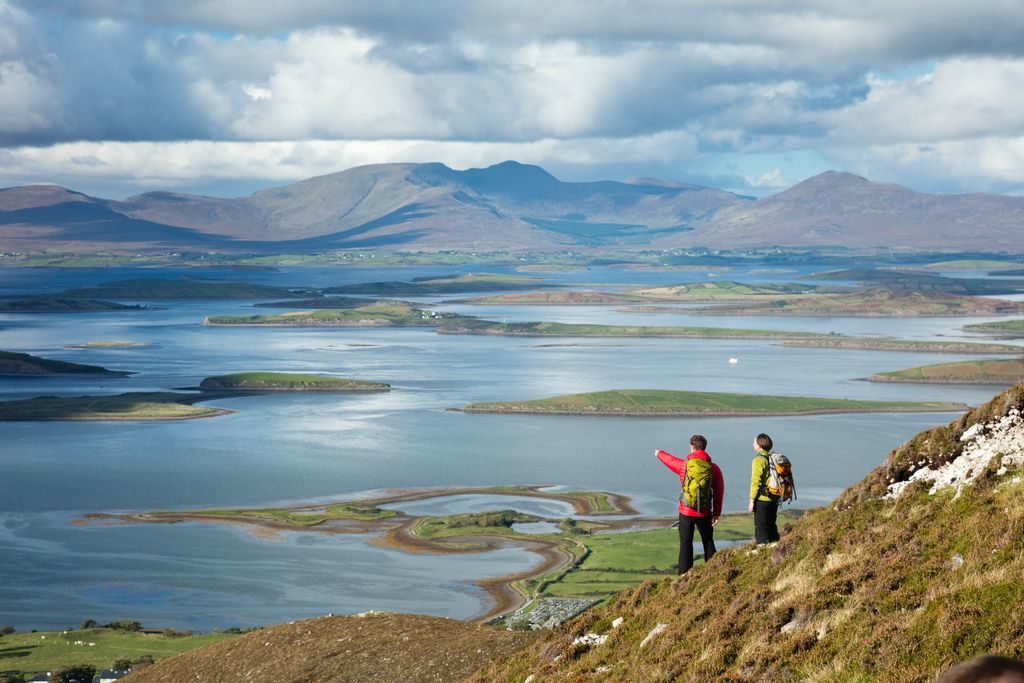 Croagh Patrick is arguably one of the most popular hikes in Ireland. The views from its summit on a clear day are hard to bate.

Those that conquer ‘the Reek’, as it’s referred to locally, will have gorgeous views out over Clew Bay and its many islands.

The climb at Croagh Patrick can take from 3.5 to 5 hours to complete, depending on pace, and it’s well worth doing when you visit Mayo next. 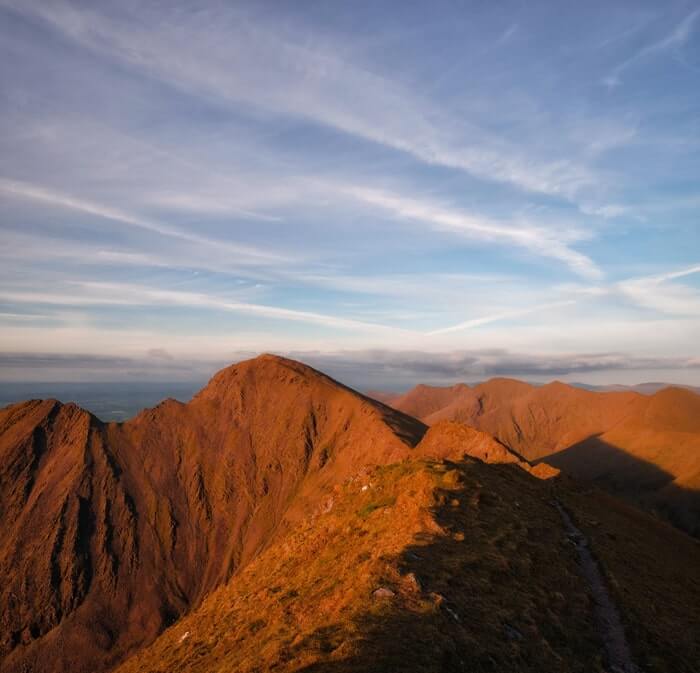 At 1,038.6 metres high, Carrauntoohill in Kerry is the highest mountain in Ireland. One of the most popular routes up the mountain is the Devil’s Ladder Trail.

This hike kicks-off in Cronin’s Yard and it’s one of the more accessible climbs on the mountain. It’s a 12km hike which involves a bit of climbing and scrambling, at times.

The views throughout each of the climbs on Carrauntoohill are mighty. Just keep in mind this is one for the more seasoned walkers, or for those on guided climbs. 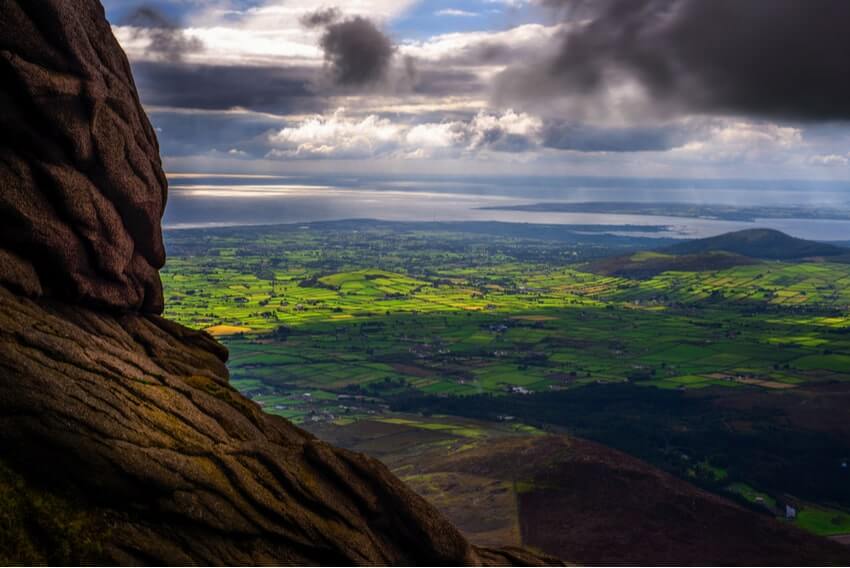 We’re back to the Mourne Mountains in County Down to Slieve Binnian. There’s a lovely 3-hour climb (with stops) here that’ll treat you to glorious views.

This is a reasonably handy hike to follow, as the route clings to the Mourne Wall pretty much from beginning to end.

Those that arrive at its summit on a clear day can expect to see everywhere from the Isle of Man to the Wicklow Mountains. 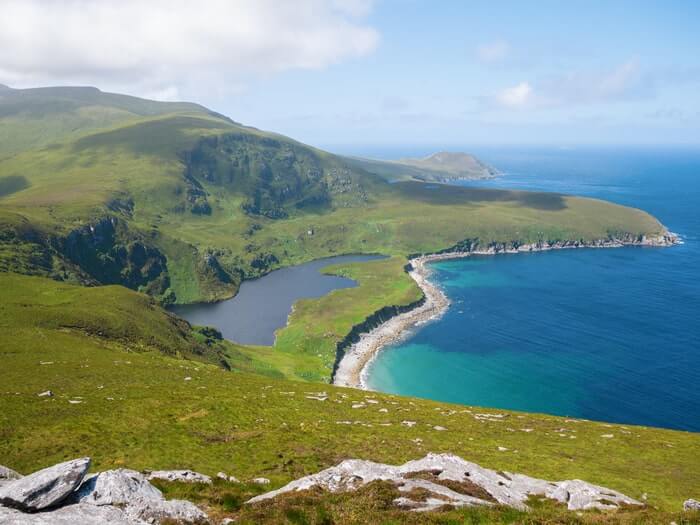 Good God just look at the view in the photo above. If that doesn’t get you chomping at the bit to get outside, nothing will!

Our next hike takes us back to Achill Island in Mayo, for a reasonably handy 3-hour climb that takes in endless magnificent views.

The starting pint for this ramble is near Lough Acorrymore (there’s limited space to park here). This hike, for the most part, is reasonably handy and shouldn’t cause too much hassle.

You’ll get some serious views on this hike. You’ll also get to see Achill’s hidden beach, Annagh Bay. 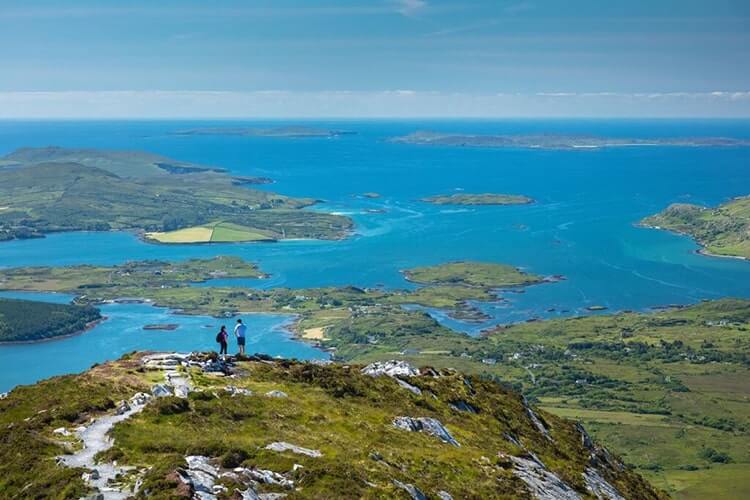 We’re off to Connemara next to Diamond Hill and one of the best views in the west. You’ll find Diamond Hill a handy 1 hour and 25-minute drive from Galway City.

There are a couple of trails here (a lower and an upper) but you’ll need to do the longer, 3-hour route to catch the view above.

If you fancy giving this a lash, check out our guide to the Diamond Hill Walk. It’s a brilliant way to escape the city for a bit.

I’ve no doubt that I’ve missed a load of other great hikes with views above. Let me know which in the comments section below and I’ll check them out!

The Sphinc in Glendalough deserves a mention, 2/3 hour hike on a boardwalk with amazing views at the tip.